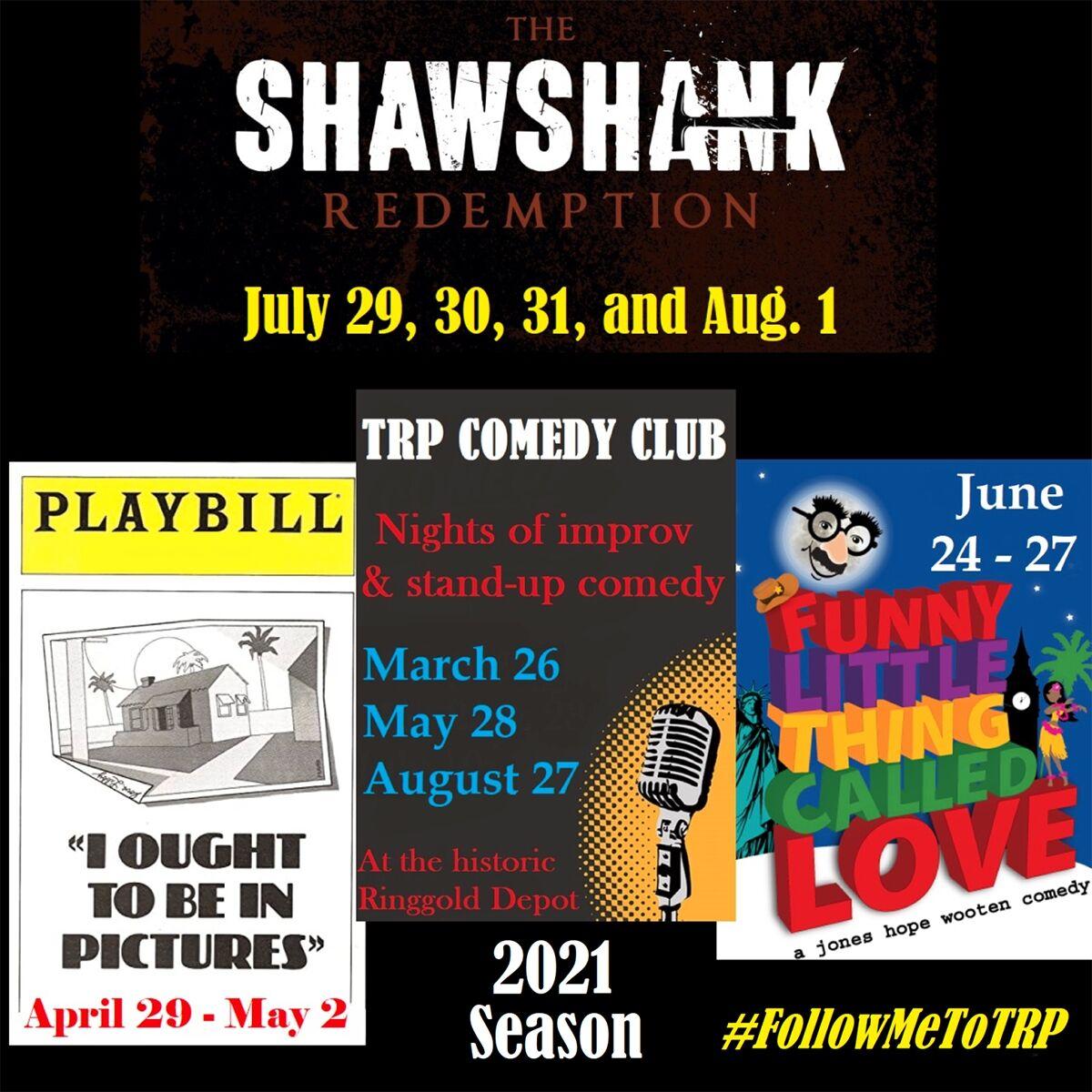 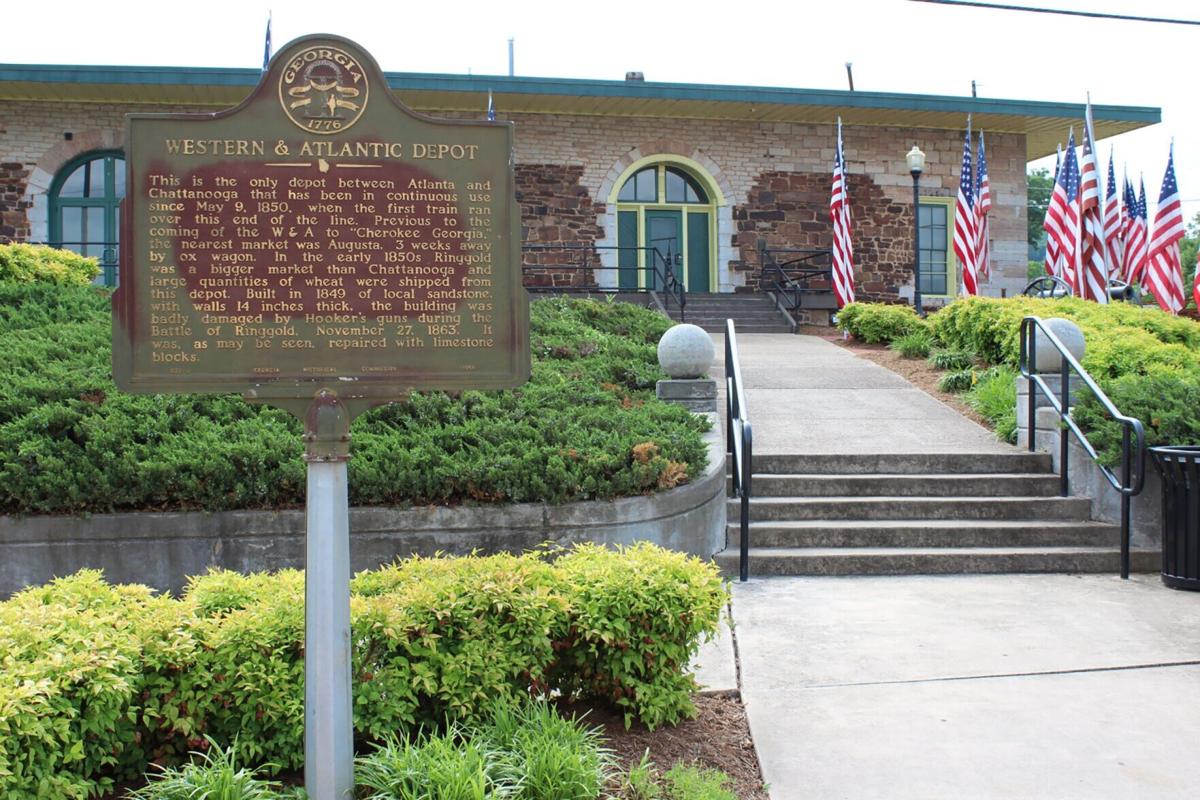 The Ringgold Playhouse is located in the historic Ringgold Depot downtown.

After postponing its production of “The Shawshank Redemption” in 2020, the cast and crew look to bring the classic Stephen King story to the stage in 2021.

The Ringgold Playhouse is located in the historic Ringgold Depot downtown.

After postponing its production of “The Shawshank Redemption” in 2020, the cast and crew look to bring the classic Stephen King story to the stage in 2021.

Following a year-long hiatus due to the COVID-19 pandemic, The Ringgold Playhouse (TRP) has announced that it will open for a 2021 season late in the spring.

After serious consideration from the city of Ringgold and TRP staff, the company will produce a 2021 schedule of three main stage productions and three Comedy Club events.

After a successful 2019, followed by a pandemic-shortened 2020, TRP hopes to bring live entertainment back to downtown Ringgold with a new year full of comedy, drama, mystery, and improvisation.

According to TRP Executive Director Adam Cook, the season will open with the Neil Simon comedy “I Ought to be in Pictures,” followed by the summer comedy “Funny Little Thing Called Love.” The season will then commence with the stage adaptation of Stephen King’s drama “The Shawshank Redemption.” The season will also continue to offer stand-up and improvisational comedy with the three Comedy Clubs.

“Everyone in our company was pretty heartbroken that the majority of our season was cancelled last year, but we all understood the reasons why it had to be that way,” Cook said. “We only got one production in before, like so many other theatres, we had to shut things down because of the pandemic.”

Cooks says the decision to start the season in the spring was something that was given a lot of consideration.

“We’re a completely volunteer-based company, so we want to make sure we’re as cautious as we can be for our volunteers and our audience members. We’re doing a newer play that has only been out there a few years, staging a Simon classic with ‘I Ought to be in Pictures,’ and taking a chance on some darker content with ‘Shawshank,’” Cook said. “We always try to have nice blend so audiences get variety when they come see us. We’re going to do everything we can to be as safe as possible when we open back up too – we’ll be encouraging the wearing of masks, socially distancing our audience members as best we can, and limiting house sizes.”

As for the Comedy Clubs, Cook says those events have been a huge hit with audiences since they started a couple of years ago.

“The Comedy Clubs have been great,” Cook said. “We had a lot of people in our company that were passionate about that concept when we started it three years ago, and the audiences have enjoyed them a lot as well. Not only does it give us something to offer between play productions, but it’s also a way for us to give actors with the improv or stand-up skill set the opportunity to perform those talents.”

“I OUGHT TO BE IN PICTURES,” directed by Katie Olsen, will run for five total performances April 29-30 and May 1-2.

Herb, a Hollywood screenwriter currently “at liberty,” is surprised when his forgotten past reappears in the form of Libby, a teenage daughter who’s trekked from Brooklyn with dreams of movie stardom. With Steffy, his sometime paramour, at his side, Herb decides to take another stab at fatherhood and hopefully this time, get it right.

This deliriously funny show from the writing team of Jones/Hope/Wooten is all about that four-letter word: L-O-V-E. Under a full moon on an impeccable night of romance, these four rollicking tales take audiences on an around-the-globe journey of unexpected hilarious twist and turns: A Texas car-selling Romeo juggling three fed-up Juliets, the Georgia Hallelujah Girls on an island getaway, sparks flying for two strangers at a rooftop London bistro, and finally a full-on mid-life crisis in Manhattan where an elaborate marriage proposal is the basis for non-stop hilarity. If love doesn’t conquer all, it will at least make your sides ache from laughter.

“THE SHAWSHANK REDEMPTION,” directed by Adam Cook, will run for five total performances July 29, 30, 31 and Aug. 1.

When Andy Dufresne is convicted of murder and sentenced to life in the notorious Shawshank prison, he must find a way to keep himself and his hope alive by using his wits and forging friendships. Based on the novella by Stephen King, Shawshank brings the story of resilience made famous by the acclaimed film to the stage.

As has been the case over the past three seasons, TRP will continue to offer an alternative form of entertainment with its popular Comedy Clubs, which will feature nights of improvisation and stand-up comedy. The improv is created on the fly with assistance and suggestions from the audience. The stand-up portion of each show will feature local, regional, and even national-touring comedians. The three comedy clubs will take place March 26, May 28 (during 1890s Day), and Aug. 27.

As is the case every season, TRP offers season tickets to avid theatergoers, which allows audience members to see all the company’s shows at a discounted price.

“Our ticket prices aren’t terribly expensive to begin with – $10 general admission – but the season pass essentially gives the buyer admittance to two shows for free,” Cook said. “One of our Comedy Club events is free because it’s part of the 1890s Day Jamboree, so attending the three plays and two other Comedy Clubs would cost a person $50 over the course of the season; however, our season passes are $40, so it’s a great deal for anyone who plans on attending all our shows.”

The 2021 season will open with the first Comedy Club on March 26 followed by “I Ought to be in Pictures” on Thursday night, April 29. Season and single show tickets can be purchased online at Eventbrite.com.

Crawford County investigator charged after use of force investigation

Most US stocks rise, indexes end mixed as earnings kick off

Prosecutors: No charges for officer in Capitol riot shooting