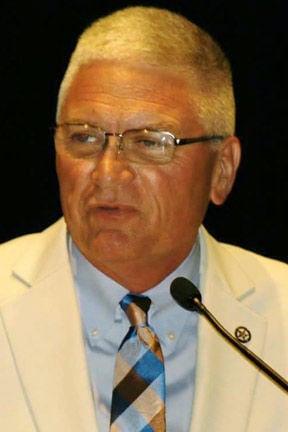 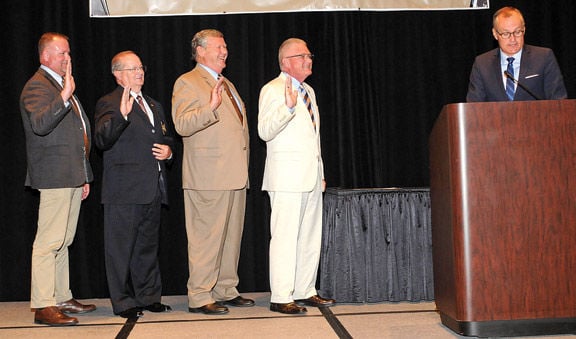 Walker County sheriff Steve Wilson recently was elected to serve as the 51st president of the Georgia Sheriff’s Association.

Wilson had previously served as second vice president and first vice president of the GSA, which was formed in 1954 by a group of sheriffs who wanted to professionalize the office of sheriff.

Sheriff’s across the state selected Wilson as their president for the 2015-2016 term.

Wilson accepted the honor in the presence of numerous law enforcement officers as well as his family, his secretary Kim Jones, Lt. Gov. Cagle and six of his employees.

In a press release by the GSA, Wilson said, “I consider it an honor to serve as President of the Georgia’s Sheriff’s Association. I look forward to continuing the great efforts that others have started.”

Wilson said his vision and goal as president of the GSA is to govern in a manor similar to how he has always governed as sheriff — with integrity and leadership that will be respected after he leaves the office.

Along with other GSA officers, Wilson will travel throughout the state and have a major presence at the general assembly.

“We will have a lot of input on different bills that come up that effect the office of sheriff,” Wilson said.

Some of the bills Wilson will advocate for is medical marijuana, a search warrant bill, civil process legislation, DNA analysis and civil asset forfeiture.

“I expect in the next 2016 legislation, there will be some bills coming through that will address the growth of marijuana for medical reasons,” he said. “As you well know, cannabis oil was approved last year for certain medical diagnosis and I feel that in 2016 there will be some talk of allowing companies in Georgia, or universities, to grow marijuana. I feel that will be at the forefront.

“I also think the ‘no knock’ search warrant will come back up again.”

Another item Wilson sees on the horizon is the use of body cameras by police officers.

“That will probably require a lot of discussion and a lot of time at the capitol this next winter,” he said. “Those things I will be involved with, trying to represent the sheriffs across the state and be a voice for the sheriffs on a lot of different legislation coming up in 2016.”

Wilson said he feels he brings to the table a fair minded, level headed approach with about 35 years of experience in law enforcement.

The newly installed GSA president said he hopes to not only listen to the state’s sheriffs, but also to the other side with the legislators.

Wilson said his first and foremost responsibility will remain serving as the sheriff of Walker County and that he plans to run for re-election in 2016.

Wilson said he believes he can balance all of these responsibilities with ease and the public will not see him miss a beat.

“I plan to seek another term in March,” he said. “I have enjoyed my 18 and a half years as sheriff and I look forward to five and a half more years,” Wilson said.

Others recognized during the Jekyll Island conference for their achievements were: “Sheriff of the Year” Al St. Lawrence of Chatham County and “President’s Award” winner Stephen Jessup of McIntosh County.

Josh O'Bryant is a reporter for the Walker County Messenger in LaFayette, Ga.

Nowhere to run: Fear in Gaza grows amid conflict with Israel

Commentary: Why isn’t the school meal program serving only those in need?

Where does Penn State’s Class of 2022 running back recruiting stand in mid-May?

How noisy will the cicadas be? ‘Dangerously loud,’ or somewhere between a vacuum cleaner and a leaf blower

After 3 years of litigation, Norwalk reaches deal on land - but can't use it for school