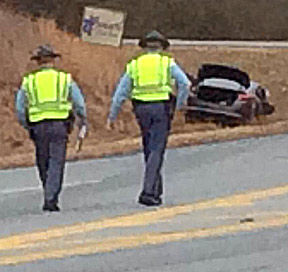 A woman remains in critical condition after an early morning wreck (Wednesday, Feb. 17) on U.S. Highway 27 in LaFayette.

Walker County 911 dispatched emergency responders to the scene at 6:56 a.m.

According to Georgia State Patrol Post 41, Helen Janice Rollins, 50, of Summerville, was driving north in a Kia Optima and was attempting to make a left turn onto Shattuck Industrial Boulevard when she “T-boned” a Chevrolet 3500 van with five men inside.

Rollins’ vehicle spun 480 degree and careened into a ditch.

She was transported by helicopter to Erlanger Medical Center in Chattanooga.

As of 12:30 p.m., she was undergoing surgery and in critical condition.

The five men in the van received minor injuries, with one suffering a broken hand.

Josh O'Bryant is a reporter for the Walker County Messenger in LaFayette, Ga.

Commissioners: Fulton development authority’s per diem policy ‘against the law’

After bad start on defense, here's how the Storm got back to locking up opponents

Justus Sheffield has another rough start as Twins score early, often vs. Mariners

'We gained so much': Dover High School celebrates Class of 2021 graduates

UAE: Now, investors can get eNOC to sell property in Dubai