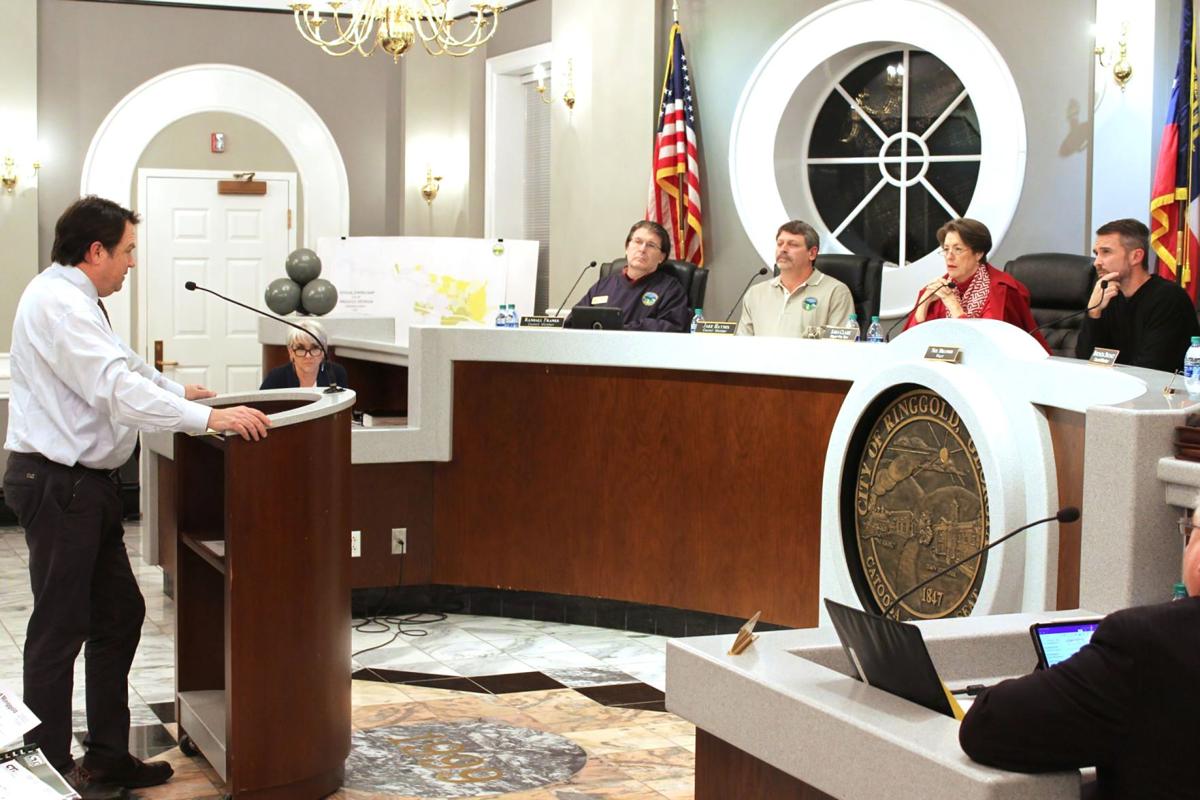 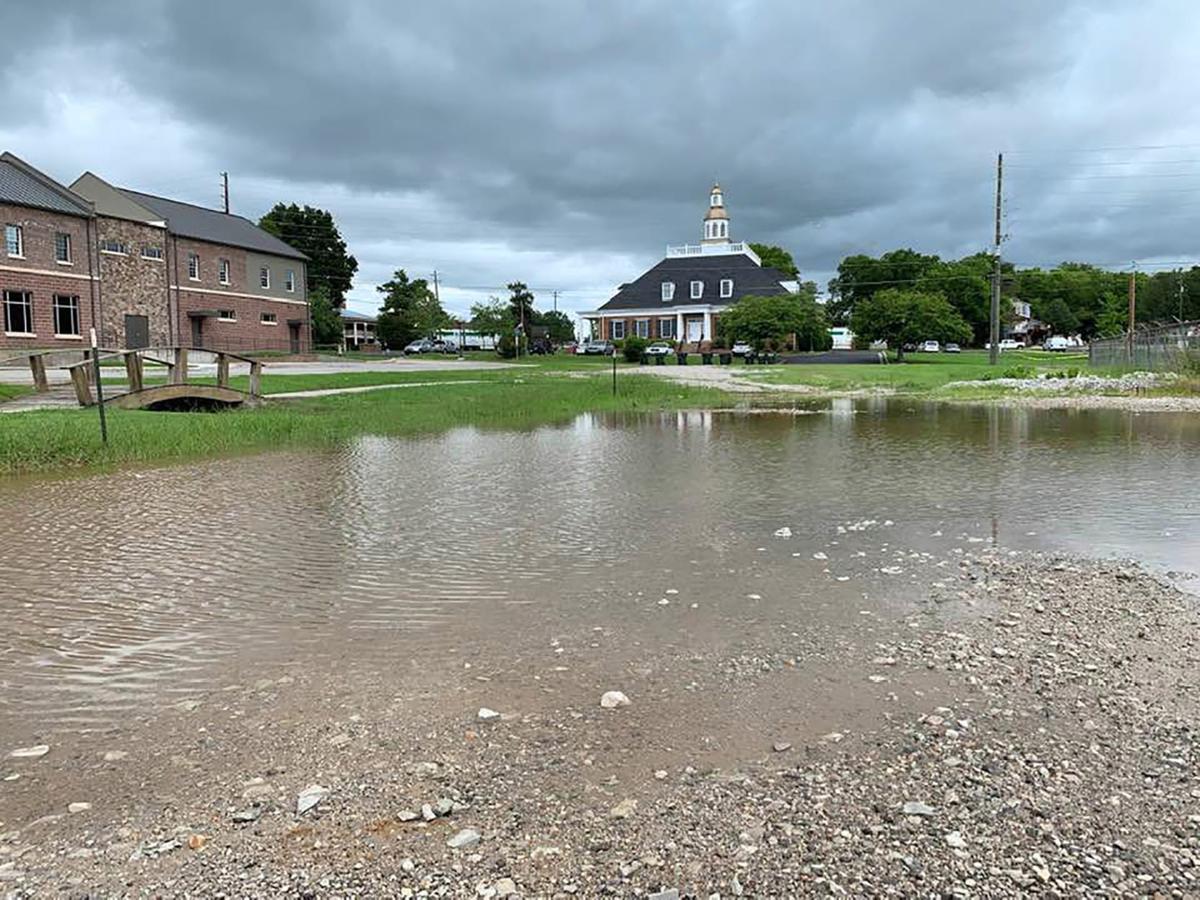 After a July 9 storm, standing water existed in the area between Ringgold City Hall and the businesses of Cleburne Street.

The backs of multiple Ringgold businesses along Cleburne Street suffered flood damage from stormwater runoff during the July 9 storm.

After a July 9 storm, standing water existed in the area between Ringgold City Hall and the businesses of Cleburne Street.

The backs of multiple Ringgold businesses along Cleburne Street suffered flood damage from stormwater runoff during the July 9 storm.

Engineers for the city of Ringgold have completed a hydrology study related to flooding issues near the historic downtown block, but residents are still concerned about potential flooding issues.

Nearly seven months ago, on July 9, a storm with heavy rainfall hit the community, which ultimately resulted in several inches of rainwater flooding some of the downtown businesses that sit between Cleburne Street and Nashville Street.

During the City Council meeting on Jan. 27, officials revealed that a hydrology study of the area in question has been completed, but didn’t go into too much detail about the results due to the freshness of the report and needing time to process the information.

Local attorney and property owner McCracken Poston addressed council, but claimed he’s limited in what feedback he can offer the study because it hasn’t been made public.

“I might want to come back another time because it’s hard to respond to a hydrology report that I haven’t seen yet,” Poston said.

As a result of that July 9 storm, businesses like Caffeine Addicts, Ringgold Art & Frame, Trestle Side Antiques and others suffered flood damage when significant amounts of stormwater washed into the back of the buildings along Cleburne Street.

Poston, who owns the Caffeine Addicts building, says the flooding did approximately $25,000 in damage to the business.

During his time speaking on the issue, Poston was critical of some of the legwork done during the study, which was revealed by engineer Philip Schofield earlier in the evening during the pre-meeting work session.

“I was upstairs and heard Mr. Schofield’s hydrology report, which was — I know he’s a smart man, but I also know that there were two buckets that he based a lot of his report on — that somebody had a bucket and they said there was five inches of rain in it,” Poston said. “There are other ways through meteorological services to determine rainfall.”

Poston commended city officials for trying to remedy the problem as best they could following the incident, but didn’t hide his concern about the issues that still exist.

“Obviously there was a lot of rainfall that night, but there are a lot of issues that I hope this report goes into, such as the area between right here (City Hall) where we’re standing and the historic block,” Poston said. “I appreciate the city opening up a ditch that helped move that water along.”

During the discussion, Poston claimed that reports at the time from the media and resident eye-witnesses reported the water coming across Cleburne Street the night of the storm, down the hill from Nashville Street, and from the area of the Depot.

As was the case when he first spoke on the issue immediately following the flooding, Poston reiterated that he’s convinced the new building and parking lot between City Hall and Cleburne Street is the main cause of the excessive water runoff.

“The bottom line is we have a lot more water shed in this small area than there used to be,” Poston said. “You’ve got a building currently with nothing in it, a parking lot behind that that the city manager, when I first complained about this, said that lot is pervious. And tonight I hear that that doesn’t matter. Pervious doesn’t have anything to with flooding; it has to do with keeping the water clean. This old block, one of the original blocks of Ringgold, is in danger.”

After the flooding occurred, Poston claims the water eventually trickled away, leading him to believe there could have been a drainage issue or that the stormwater system wasn’t capable of handling the amount of water that befell the city.

“The reports of the July 9 event were that the water came from the City Hall area, came in fast, flooded everything. And then suddenly, like you were pulling a plunger, it drained away,” Poston said. “It’s hard to prove after the fact, but it seems like a drain that had not been inspected in some time might have had a blockage and it literally flushed away at some point. Again, it’s hard to respond to a report that I can’t see to respond to and hard to make my comments and concerns before I can follow up with them the way you’ve got this structured. But I will file an open records request to get the report.”

During his parting comment, Poston urged the city take the necessary measures to ensure that the stormwater is addressed so future storms don’t have the same flooding impact on the area.

“I appreciate you doing the report, but I also know that you’ve got big plans for that area and that scares me. And I think it should scare all of you because it’s going to happen again unless you do something major to retain water between here and the historic block because that’s just the way it’s come to be with all of this added water shed that used to go into the ground,” Poston said.

After Poston’s comments, engineer Philip Schofield commented on the concerns and gave a brief rundown of what the hydrology study actually involved.

“Just to give you a summary of what we evaluated, the area we evaluated is between City Hall and Nashville Street,” Schofield said. “We looked at the drainage and part of that was we had to do some diligent mapping and create a good map for our computer simulation model. That included the area I previously mentioned, as well as the downstream areas downstream of Nashville Street and also the ridge side east of the railroad tracks.”

Schofield said the study consisted of trying to simulate how much water hit the area the night of the storm, in order to get an idea of how the city’s stormwater system handled or didn’t handle it.

“The results of the dynamic computer model shows we evaluated your typical storm events — one year, two, five, 10, 25, and 100-year storm events,” Schofield said. “To be able to simulate the flood that occurred on Cleburne Street in July, we had to enter in a high-intensity storm event very close to a 500-year storm event. It’s like 1.7 inches in five minutes or five inches in 15 minutes, and this is consistent from some of the eye-witness accounts.”

The city has a renaissance plan development in place for the block between City Hall and Nashville Street that it strategically devised with help from the Carl Vincent Institute at the University of Georgia.

Schofield says the hydrology study includes planning ahead to limit future runoff from whatever the development ends up looking like.

“We were looking at the Carl Vincent plan and looking at potential increases in runoff that may be created by that and one of the recommendations is when that plan is implemented, the city might want to look at incorporating some kind of detention whether it’s underground detention or something similar to that to attenuate some of the flows due to the increases,” Schofield said.

Mayor Nick Millwood echoed Poston’s comment that it’s hard to comment on a study that was just completed without really combing through all the details.

“It was a very interesting report,” Millwood said. “We got it in full tonight, so we haven’t had time to study the report yet. Like Mr. Poston said, it’s hard to do too much commenting on it.”

Millwood added that he was amazed at how the severity of the July 9 storm required such intricate modeling in order to evaluate it.

“I did think it was interesting that it took you (Schofield) inputting the data into the system — it took five inches in 15 minutes in order to simulate what actually happened out on the street — whenever you have a flash flood like that it’s hard to know exactly what’s going on.”

Schofield said the flooding reminded him of a similar incident in Chattanooga a while back.

“It kind of reminded me of that flash flood that happened over at Hamilton Place Mall — just such a high-intensity storm event that dropped a lot of water in a very short period of time and your inlets and your pipes aren’t — they’re not built to withstand that amount of water,” Schofield said. “Typically, a 25-year storm is what your pipe networks are designed for.”

No action was taken on the matter, but Millwood ended the discussion by stating that he and/or other Council members would be in contact with Schofield if they had questions about the results of the report.