On Jan. 21, Catoosa County’s Board of Commissioners passed a resolution requiring all residents to fill out a sign-up form prior to public meetings if they wish to speak on an issue. 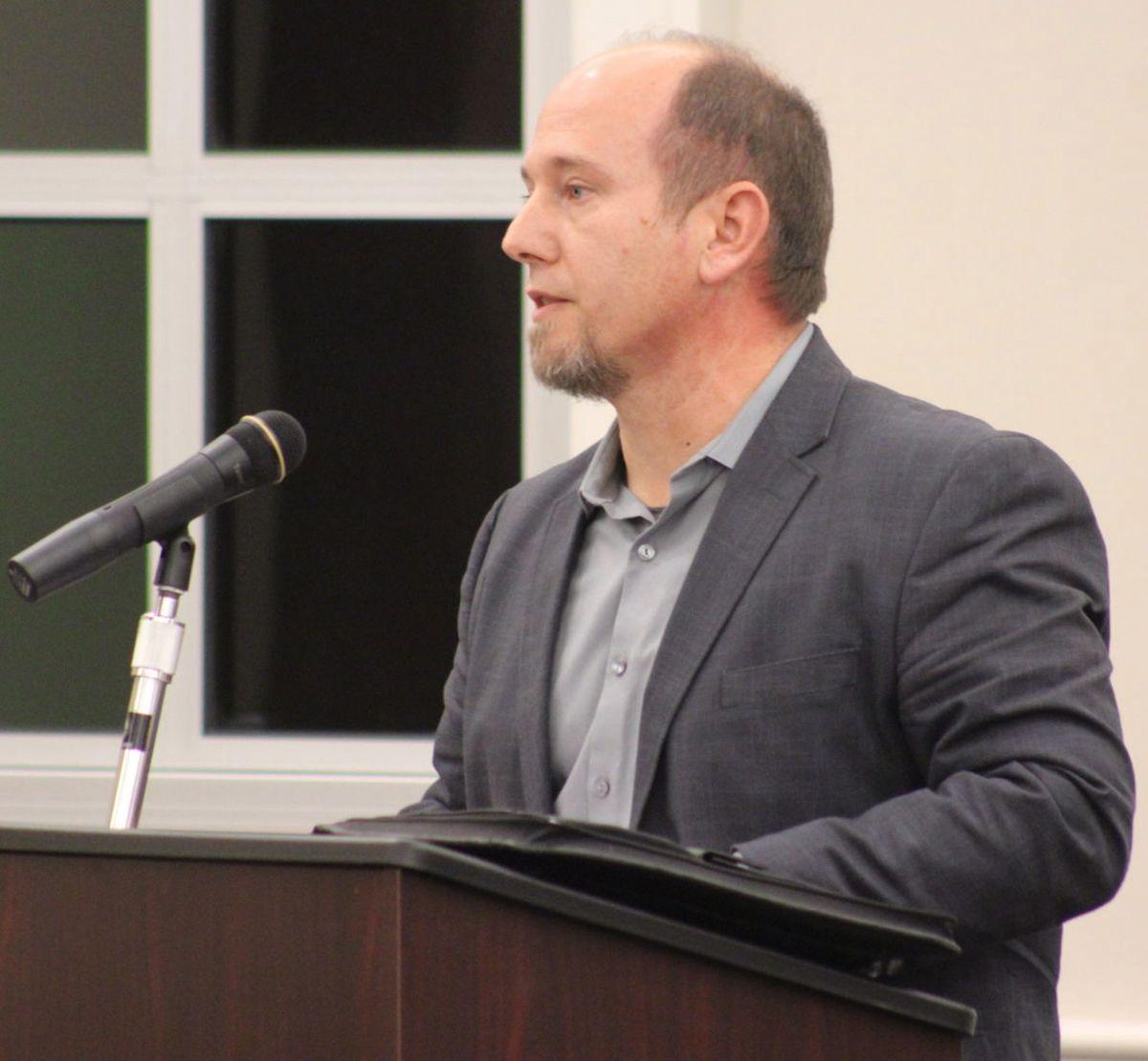 Resident Nick Ware speaks out during the Jan. 21 Board of Commissioner’s meeting claiming the new rules impede freedom of speech rights. 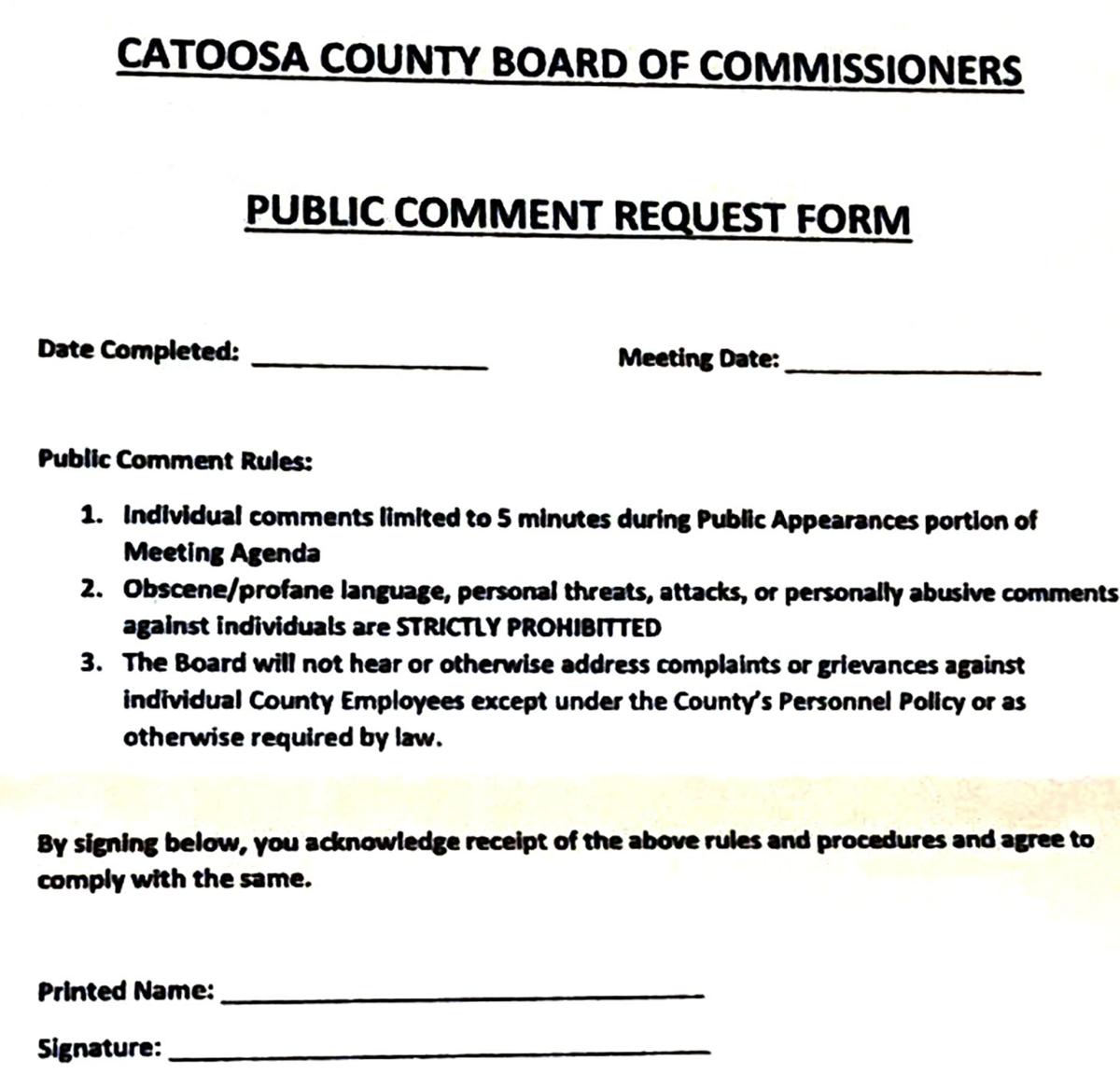 On Jan. 21, Catoosa County’s Board of Commissioners passed a resolution requiring all residents to fill out a sign-up form prior to public meetings if they wish to speak on an issue.

Resident Nick Ware speaks out during the Jan. 21 Board of Commissioner’s meeting claiming the new rules impede freedom of speech rights.

Catoosa County officials have passed a resolution making a temporary rule a permanent one, which will task residents with filling out a form before being able to speak on issues during public meetings.

It’s been six months since Catoosa County’s Board of Commissioners implemented a then-temporary rule requiring residents to complete a sign-up form before speaking in the public appearance portion of meetings.

On Tuesday night, Jan. 21, commissioners voted to make that six-month temporary rule a permanent one — much to the dismay of several residents who feel their First Amendment freedom of speech rights are being stifled.

For years, anyone in the audience during meetings could simply raise their hand, walk up to the lectern, and then spend five minutes or less expressing their concerns or opinions about an issue.

Now, per the resolution, residents are still allotted five minutes to speak, so long as they complete and submit a sign-in sheet to the county clerk prior to the start of the meeting and agree to abide by the basic rules attached to the sign-in sheet.

Several residents, including George Battersby, Phyllis Williams, Nick Ware, Ben Scott, and others are just as passionate now as they were in August about the new policy limiting their freedom of speech.

“Putting anything in front of an individual to perform before the reasonable action that they want to freely perform is impeding on their freedom or liberty to do as they would like to do,” Ware said. “If I stood back here at this door and I said, ‘you must commit to me a promise of three things and sign a piece of paper before confirming before I let you exit the building’, am I impeding upon your right to egress through those doors? Yes, gentlemen, I would be impeding you.”

Ware also submitted a petition with approximately 200 signatures from residents who oppose the resolution.

One point brought up by residents Anthony Sims and Ben Scott related to people getting to meetings in time to sign up, and/or deciding to speak about an issue after the meeting has started.

“I feel that citizens of the county should be able to come through the door and if they decide they want to speak at any point in the meeting, if there’s an appropriate time for it, they should get to speak,” Sims said. “Signing before six o’clock — I barely made it here in time (tonight) to sign myself up because I was coming straight from work. If someone wants to speak, they should be able to speak. It’s the only time we actually get to speak to all you guys at one time.”

From Scott’s perspective, he said he feels like the form is unwarranted.

“I believe that the previous procedures for appearances that have been effect ever since I began coming to meetings in 2011 were sufficient, and I’ve never seen anyone really violate or somebody have to be removed from a meeting because of what they said,” Scott said.

Scott said that someone may come to the meeting with no intention of speaking about an issue, but that circumstances arise that might inspire them to do so. The policy requiring everyone to sign in before the meeting would cause that person to not be allowed to contribute their comments.

“That particular piece (signing in) would have affected me in times past because I have come to meetings with no intention of speaking, but after hearing some appearances or looking at the agenda closer, I made a decision to speak.”

George Battersby, who has often been critical of county hires and spending in recent months, claims the rule is being put in place because of residents like him, who don’t shy away from speaking their truths about issues.

“I don’t believe for one minute the reason for this new request for is for that reason — to enable them to help us,” Battersby opined. “I believe they cannot handle the criticism and want to control all the topics. That’s what it’s all about, thus taking away our First Amendment rights of freedom of speech.”

Battersby also claimed that elected officials are supposed to work to represent the residents who elect them into office.

“This is a job. We (residents) are your employers. It’s a job,” Battersby said. “You can’t just keep changing things because they don’t suit you.”

Former commissioner Ray Johnson also spoke on the matter and urged the board to not impose the new rules on the public.

“As I’ve said before, I asked y’all last time and I’ll ask you again — please just let people come up and speak for the five minutes, and then sit back down and y’all go about your business,” Johnson said.

All the pleas from residents to not pass the resolution were made during the public appearances portion of the agenda, and it wasn’t until the end of the meeting when the issue went to a vote.

Just before the vote, County Attorney Chad Young reiterated the details of the resolution and clarified some of the language.

“This is to take the rules that were put in place regarding public speaking on a temporary basis back in August, and make those the permanent rules governing public comments and speaking before the commissioners,” Young said.

Young explained that one of the driving forces behind the new rules is so the board can weed out anyone verbally attacking county employees or other residents.

“The idea being that if somebody wants to come and make a negative comment about the commissioners or any elected official, that’s permitted. What I understand the board is trying to avoid is if two citizens have a private dispute and they want to use this as a forum to come up and for five minutes personally attack each other, that would be prohibited.”

The resolution passed on a 4-1 vote, with District 4 Commissioner Charlie Stephens voting no.

During the pre-meeting work session and again in the actual meeting, Stephens explained that he doesn’t want to hinder any resident from getting up and speaking about anything they choose.

“The reason I voted the way I did – to me, that form is restricting,” Stephens said. “I feel like it’s (the sign-up form) restricting people and their voice to stand up here and speak. I’m sorry, but that’s the way I feel, and I’ll stand behind my votes until the end of my time here on this Board of Commissioners.”

Commissioner Chuck Harris likewise explained his view of the issue after the vote.

“This is in no way to prohibit anyone from speaking out against us,” Harris said. “If you can’t get here on time, you can sign up online or call in. The bottom line is, this isn’t a freedom-of-speech issue. This is a running-of-the-meeting issue. Anybody can speak on any issue they want to speak to. This is your county, this is your Board of Commissioners, and not one thing has changed.”

Chairman Steven Henry said a school group thought better of attending a recent meeting due to the reputation of how meetings are run and some of the behavior exhibited.

“When I first started hearing that we had 4-H groups that wouldn’t bring their senior class to our meetings because of the behavior — that’s not the kind of government I want us to be,” Henry said. “That’s not the legacy I want to leave behind. Like it or not, the rule has passed, and hopefully we can move on and just do our jobs.”

‘We’re sick of it’: Anger over police killings shatters US

Protests over police killings rage in dozens of US cities