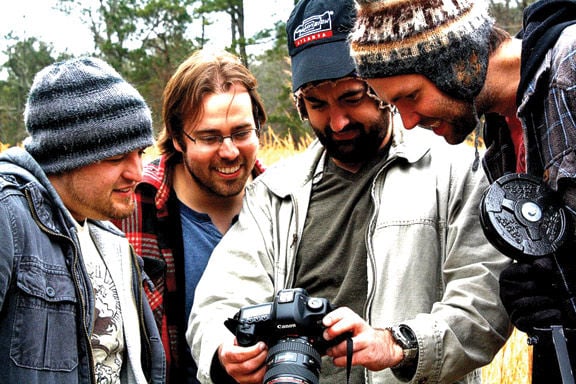 Filming for “Down and Yonder” is scheduled to begin in late July in Walker County. The film crew is looking to raise $30,000 to produce the full-feature film. The fundraiser officially kicked off Feb. 2 on indiegogo.com and will run for 60 days. From left: Benson Greene, Geoff James, Christopher Flippo and Sam Griffiths, all of Cindicate Productions. 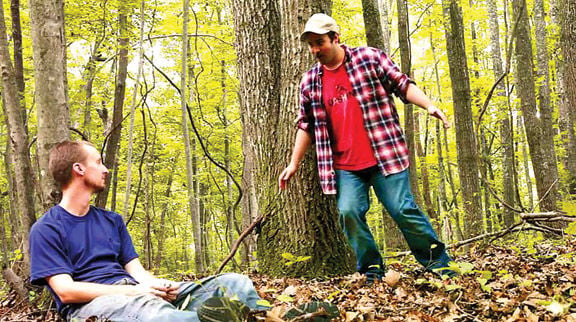 Chris Shultz (left) and Geoff James appeared in Cindicate Productions’ short film “The Future West,” and now the company is raising funds to shoot a feature-length follow-up film chronicling the coming-of-age friendship of the characters “Wally” and “Sugar Baby.”

Filming for “Down and Yonder” is scheduled to begin in late July in Walker County. The film crew is looking to raise $30,000 to produce the full-feature film. The fundraiser officially kicked off Feb. 2 on indiegogo.com and will run for 60 days. From left: Benson Greene, Geoff James, Christopher Flippo and Sam Griffiths, all of Cindicate Productions.

Chris Shultz (left) and Geoff James appeared in Cindicate Productions’ short film “The Future West,” and now the company is raising funds to shoot a feature-length follow-up film chronicling the coming-of-age friendship of the characters “Wally” and “Sugar Baby.”

A production company out of Atlanta, with ties to Walker and Catoosa counties, is currently raising funds to shoot an independent full-length feature film in the area this summer.

A group of aspiring filmmakers banded together over the last few years to create the Atlanta-based Cindicate Productions, and now the friends have returned home to make a feature film inspired by characters from one of their earlier short films.

Producer and actor Geoff James, director and writer Christopher Flippo and director of photography Benson Greene are natives of Walker County, and were all part of Ridgeland High School’s class of 2005.

Greene and Flippo are both from Rossville, and James is from Chickamauga and LaFayette.

“We’ve been thrilled by the support we’ve received so far,” James said. “We got a lot of great feedback from people in the area.”

The crew is primed to make the film “Down and Yonder,” which follows up with characters “Wally” and “Sugar Baby” from its earlier short film, “The Future West,” which premiered at last year’s Chattanooga Film Festival.

James said the story is about two friends having a belated coming-of-age in their mid-twenties. When one of them becomes convinced to move away, they both begin to examine their futures.

The film is about a friendship that becomes tested by time and distance, and it is ultimately a love letter to growing up in a small southern town. The crew describes the film as a comedy/drama that explores themes of friendship, maturity and the search for home.

The screenplay was written by Flippo and the story has been a long time coming for the group, who are excited to tell the story in and around their hometowns.

“It’s fun to see how far it’s come from when we first started talking about it,” James said. “It’s changed since the beginning, but I think the first draft of it was finished in 2009. We sent it out to a lot of friends and family, and then we also got feedback from other filmmakers and actors, so we’d have a good mixture of opinions.”

Shooting for “Down and Yonder” is slated to begin on July 25 in Walker County. The crew is looking to raise a grand total of $30,000 to finance the project, with $20,000 of it currently being funded through an Indiegogo crowd-funding campaign that can be found at indiegogo.com.

The fundraiser officially kicked off Feb. 2 and had already accumulated $4,326 as of Feb. 10, which is approximately 22 percent of their goal.

“It’s really going well, and we’re really happy with it so far,” James said. “It’s a great start for the first eight days.”

The team members feels if they can at least reach the $20,000 goal, they could then discuss additional funding through another company.

As the shooting date approaches, James said the team is finalizing locations, casting the final few actors for minor roles, and doing all they can to spread the word about their dream of making this film.

“We’ve talked to a bunch of people who are behind us,” James explained. “There are some people letting us use locations, and friends and family have put us in touch with restaurant owners who might be willing to feed the crew during the nine-day straight shoot. Every little thing like that is priceless and very appreciated by anybody making an independent film.”

James also pointed out ties to Ringgold and Catoosa County in some of the company’s earlier work.

“My brother Shawn Bible is a Ringgold attorney, and he has diligently worked to get all of the legal things ready for our film,” James said. “He’s also been a huge supporter by donating his time and money to help us with locations in and around Ringgold.”

Bible’s office at his firm was used for a scene in “The Future West,” and James said his other brother, Ashley and his wife Erin also assisted with their film “Dogberry.”

“Ashley's daughter Lyla was also in "Dogberry," which was our first short film,” James said. “They are all graduates of Ringgold High School and devoted members of the community.”

For James, Flippo and Greene, the best part about making the film is the opportunity to do it right in their hometown.

“Filming it here is huge,” James said. “We all feel very humbled. We’ve had a good following with our shorts, but we did most of that with funds from our own pockets. It’s just invigorating to have people behind us, and to have the community we grew up in believing in us enough to help like this. It’s just great.”