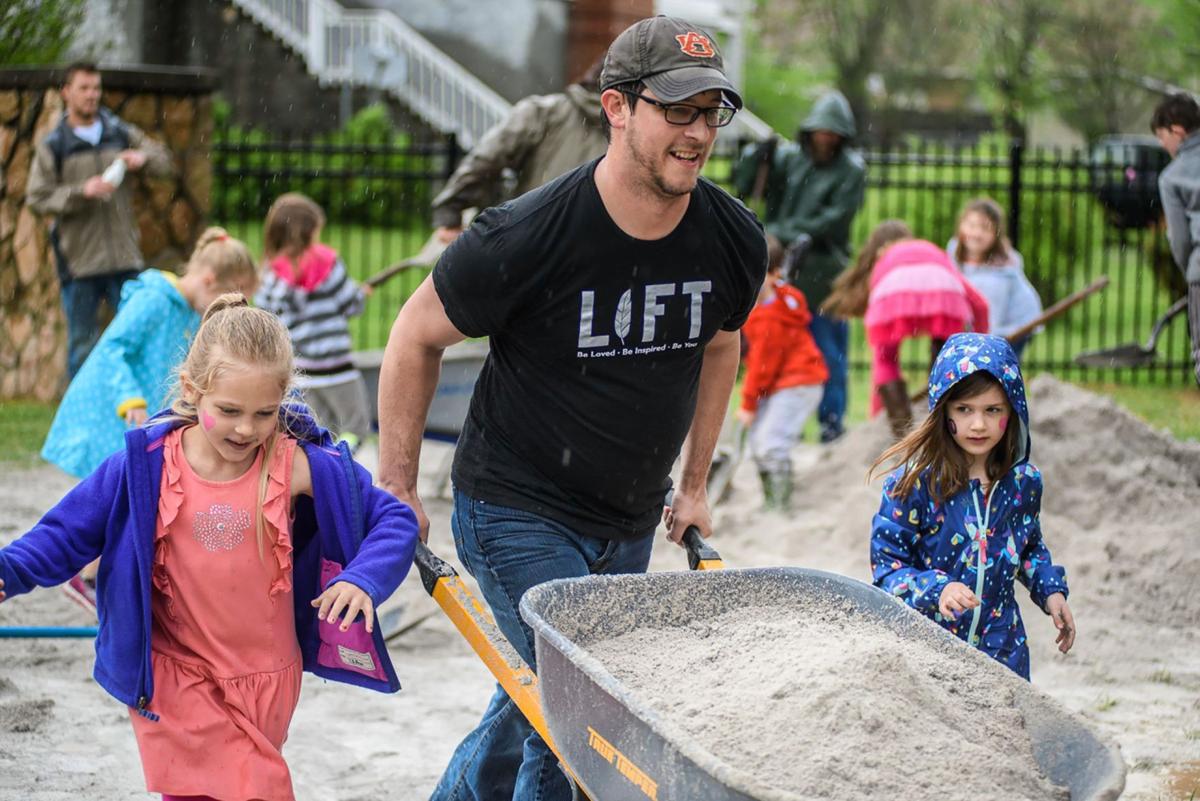 On April 27 last year, the nonprofit organization LIFT partnered with the cities of Ringgold and Fort Oglethorpe, as well as Catoosa County and other groups, to clean up streets and waterways and landscape public spaces and then gather to celebrate Earth Day. 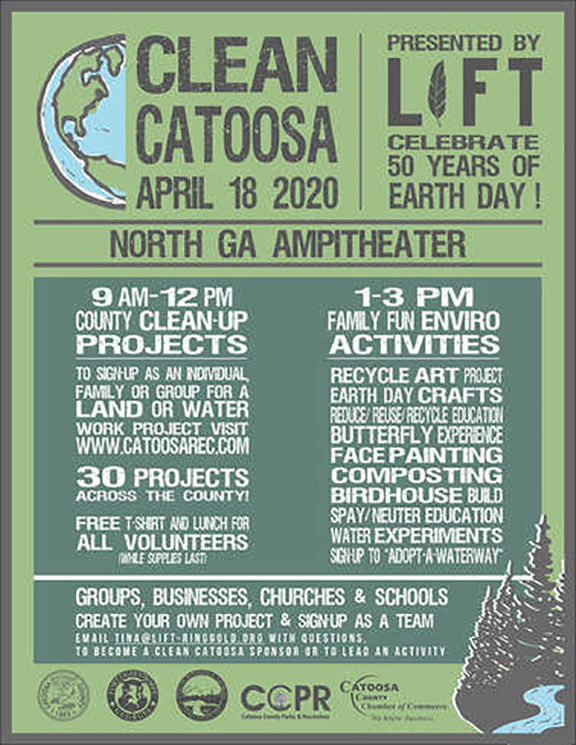 Catoosa County and the cities of Ringgold and Fort Oglethorpe are partnering with the non-profit organization, LIFT, for the annual "Clean Catoosa" Earth Day event Saturday, April 18. 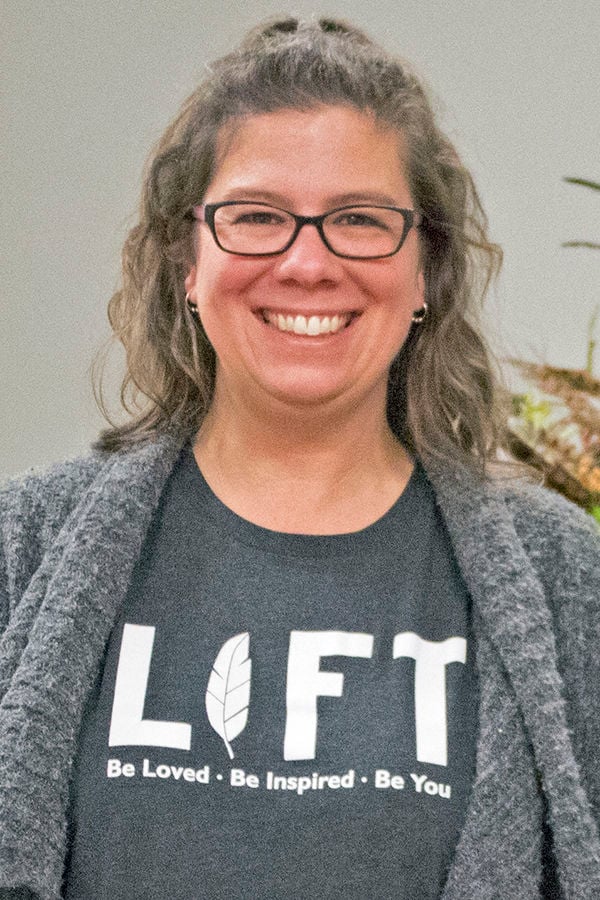 On April 27 last year, the nonprofit organization LIFT partnered with the cities of Ringgold and Fort Oglethorpe, as well as Catoosa County and other groups, to clean up streets and waterways and landscape public spaces and then gather to celebrate Earth Day.

Catoosa County and the cities of Ringgold and Fort Oglethorpe are partnering with the non-profit organization, LIFT, for the annual "Clean Catoosa" Earth Day event Saturday, April 18.

The city of Ringgold is joining forces with the city of Fort Oglethorpe and Catoosa County for the Earth Day “Clean Catoosa” event slated to take place Saturday, April 18.

Over the past couple of years, the local non-profit organization, LIFT, has organized Earth Day efforts in the community to not only clean up the environment, but to also educate youth and adults about projects that can help better the planet.

During the Jan. 27 Ringgold City Council meeting, City Manager Dan Wright explained the annual partnership with LIFT, and asked for the board’s blessing for city staff to begin planning the joint event.

According to Wright, LIFT approached the city a couple of years ago about doing an Earth Day event to coincide with Cities Week, which is recognized by the Georgia Municipal Association.

“Earth Day and Cities Week is usually a day or two a part, so we had this wonderful group of volunteers (LIFT) that’s very organized, boots on the ground, and just willing to serve our community come together alongside us and made an event that was probably going to be very small in nature turn out to be very large,” Wright said. “I believe it rained buckets the entire time and was still successful. The theme this year with LIFT is ‘Clean Catoosa.’ The city staff has talked again about joining with LIFT along with Fort Oglethorpe and Catoosa County.”

As the event has grown, the effort has grown to include creek clean-up crews, planting crews, and other volunteers who find various projects to better the Earth.

Wright added that last year’s event also included volunteer trash pick-up crews, folks spreading playground mulch, and several educational stations for youngsters so they could learn tips about how to keep the environment safe through recycling and other efforts.

“April 18 is the date that we’re trying to go with, and we would like for y’all to authorize us to plan that event if you so desire,” Wright asked of the council. “To work with LIFT, Fort Oglethorpe, and Catoosa County again — I think we’re all better together.”

Tina Pinkston, executive director of LIFT, said that although the first event in Ringgold two years ago included downpours of rain, the event has picked up more traction every year.

“The first event was when the buckets (of rain) happened and we still had close to 150 people that day. It was awesome,” Pinkston said. “Then, last year, ‘Clean Catoosa’ began and 367 were involved that day on 26 different projects across the county.”

Pinkston says the passion and commitment behind the project is what’s making it successful.

“We’re really excited about this year because that momentum has just continued to grow,” Pinkston said. “This year is the 50th anniversary of Earth Day no less, so the challenge I’m uttering tonight for the first time is how great it would be if we could have 50 projects that day, which would be a significant increase.”

Pinkston said the organization is working with the Catoosa County Chamber of Commerce this year to help spread the word in the community.

The council unanimously approved the city’s involvement, and Mayor Nick Millwood took time to express his support for the endeavor and what it means to the community.

“We’re so grateful for you, thank you,” Millwood said. “It was a great first year event when we were out in the rain. That made it even cooler to me and I’m glad to see it growing.”

The second annual “Clean Catoosa” event will include work projects across Catoosa County from 9 a.m. to noon on Saturday, April 18, followed by a lunch for the volunteers at noon. The Earth Day celebration for the general public will then be held from 1-3 p.m. at the Northwest Georgia Amphitheater on the Benton Place Campus.

Anyone seeking more information about getting involved with the event can contact LIFT Executive Director Tina Pinkston at 423-314-2438, or via email at Tina@lift-ringgold.org.