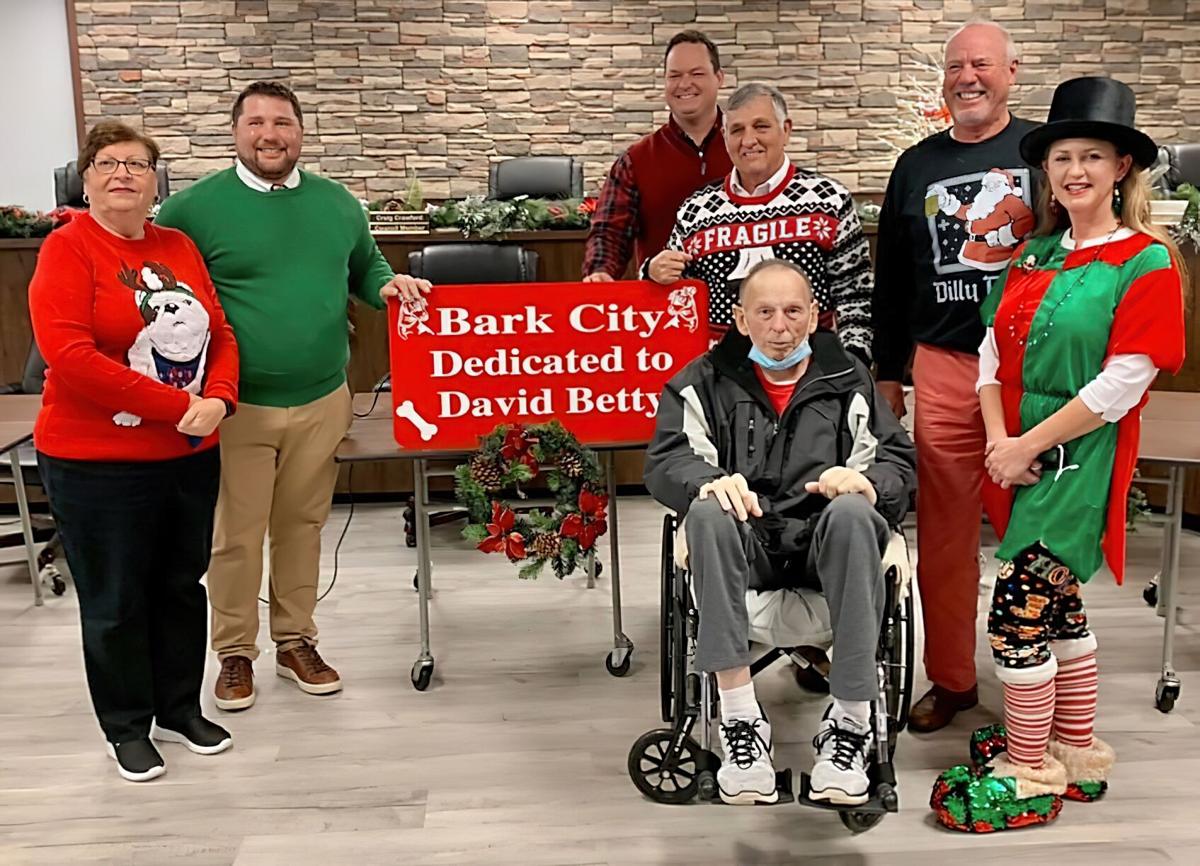 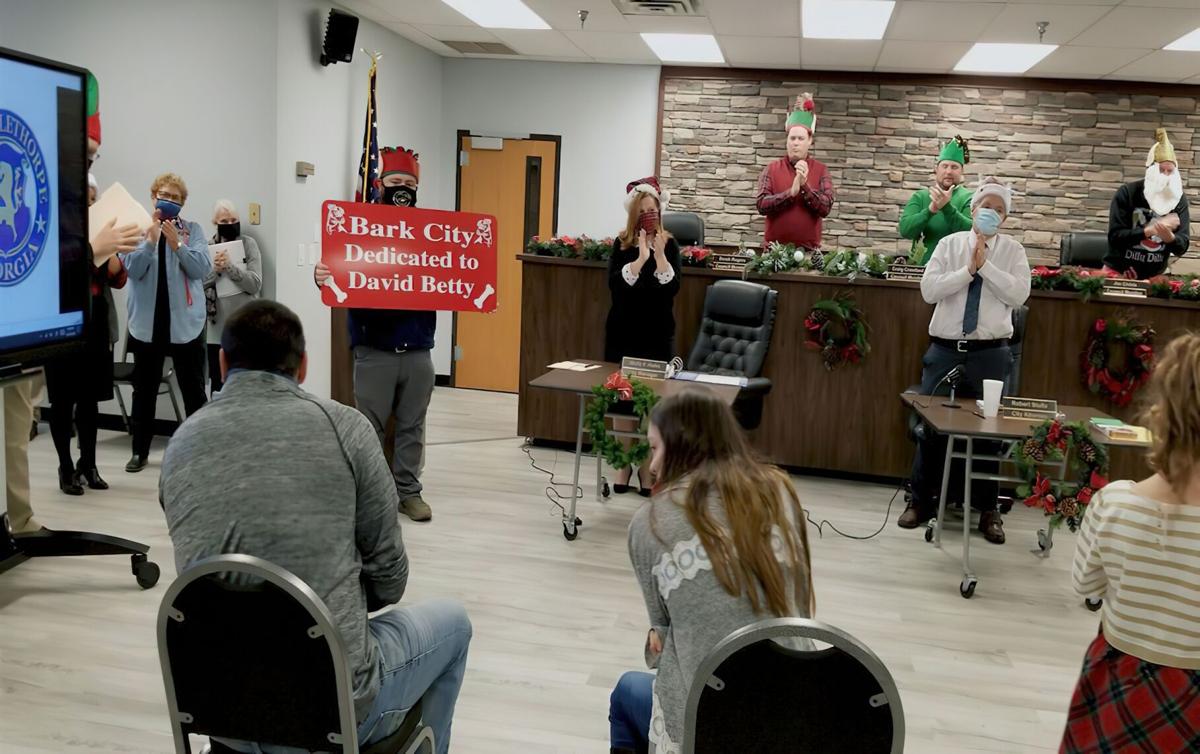 The Fort Oglethorpe City Council was in full Christmas spirit and costume when it met on Dec. 14 and dedicated Bark City Dog Park to David Betty, husband of council member Rhonda James and one of the founders of the committee to bring the dog park into existence.

The Fort Oglethorpe City Council was in full Christmas spirit and costume when it met on Dec. 14 and dedicated Bark City Dog Park to David Betty, husband of council member Rhonda James and one of the founders of the committee to bring the dog park into existence.

David Betty, husband of Fort Oglethorpe council member Rhonda James, was honored at the Dec. 14 council meeting by having Bark City Dog Park dedicated to him.

Betty was one of the founding members of the dog park committee in 2016, when a dog park for Fort Oglethorpe was just a dream.

“David has always had a love of animals,” says James. “He always had dogs in the family when he was growing up.”

Betty and James lost their rescue dog Seven (named after a Star Trek character) a couple of years ago. James says the dog stayed by her husband’s side as he was dealing with health issues. The couple chose not to get another dog because they felt they wouldn’t have time to give it the attention it needed. The dog park was another way they could make animals a part of their lives.

In addition to his work on the dog park committee planning and raising funds, Betty took it upon himself to stop by the park every couple of weeks as it was being built and photograph progress to share on social media.

“The idea to dedicate the dog park to David,” says James, “was Paula Stinnett’s.”

Stinnett, a Fort Oglethorpe City Council member, has a tradition of writing a Christmas poem in which she parodies elected officials of the city, as well as others.

Stinnett reads the poem aloud at the last council meeting of each year. This year, she brought along her dog, dressed as an elf. After reading the poem, she instructed her dog to go around the room and choose someone who had made Santa’s “nice” list.

Betty was armed with dog treats but did not know what Stinnett had planned. The dog made the rounds of the room, sniffing as it roamed, and was drawn to the man with the treats as the nicest in the room, to Betty’s and everyone else’s delight.

“Two and a half years ago,” says James, “David was diagnosed with stage four bladder cancer.” Betty was given two weeks to a month to live. He chose to fight. He’s been through immunotherapy, clinical trials, five rounds of radiation, and chemotherapy. Three weeks ago, he started on hospice.

Betty has been involved in his community for decades, especially supporting and coaching girls’ recreational softball. As the father of four daughters, girls’ sports are close to his heart. But so are animals, and the dog park was a sort of icing on the cake for Betty.

“Having the dog park dedicated to me was very emotional,” says Betty.

After the council meeting, city officials and employees held a party for Betty. Everyone enjoyed small cakes, hot cocoa and cider.

Fort Oglethorpe City Council and city employees agree that Betty has done an outstanding job of living these past few years.

UConn's hiring of Sal Alosi was questioned early on. Now the school faces a lawsuit.

Kandiyohi County marriage licenses for the week of June 14, 2021

COVID-19 case rates fall to lowest level all year, all but one west central Minnesota county reports vaccine rate of 50% or more

Competency hearing rescheduled to September for defendant in 1974 Willmar homicide