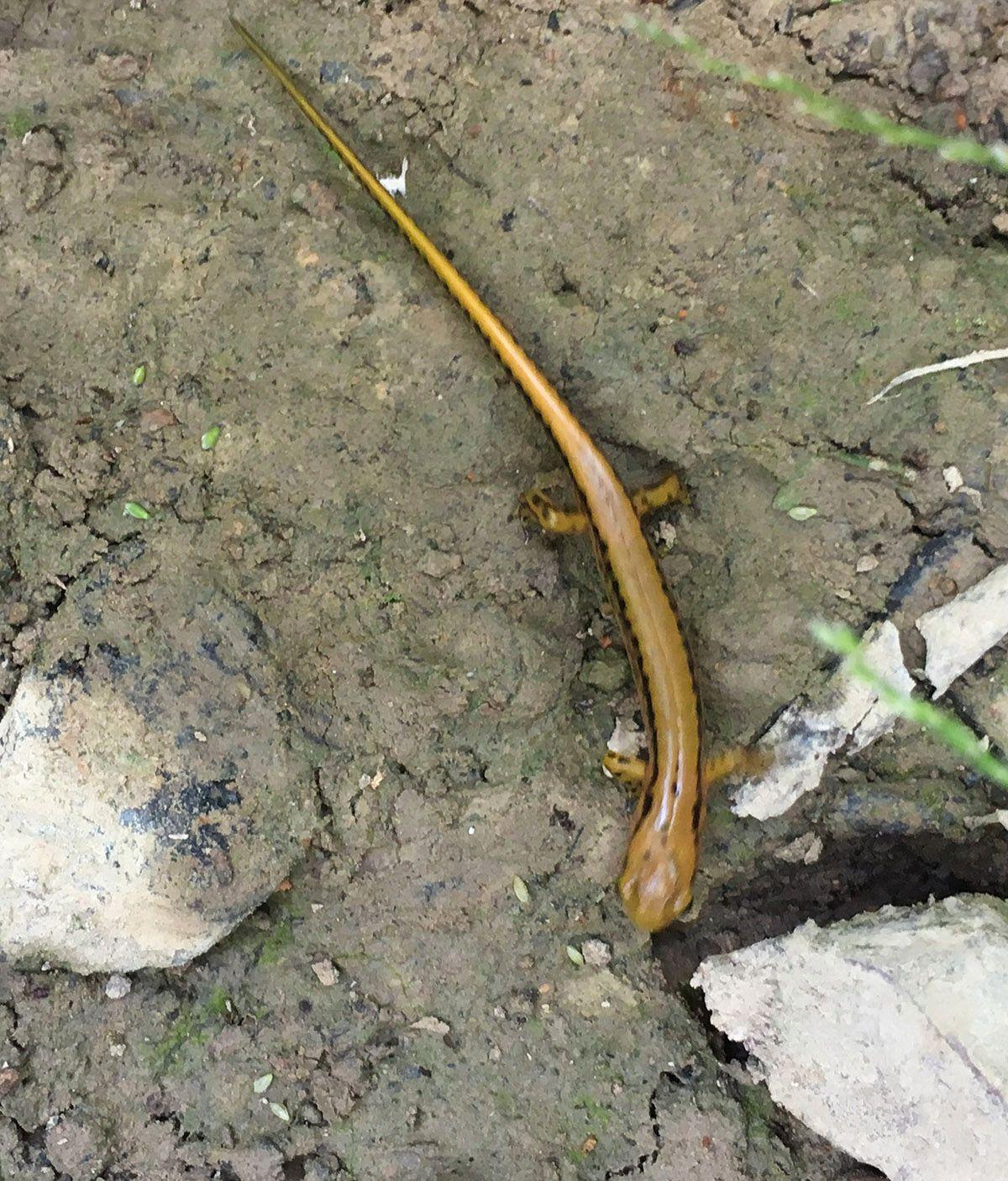 This is the young longtail salamander we found in a creek bed near our house in Northwest Georgia.

This is the young longtail salamander we found in a creek bed near our house in Northwest Georgia.

My daughter loves to poke around in the wet weather creek that runs under our driveway, and on a recent trip to the mailbox, I found myself waiting for her with my son in his stroller. I let her get her fill of the microcosm that any body of water, even a drying one, presents.

Her shrill “Mom!” brought me over to the edge of the culvert, and I saw, near a rock she’d overturned, a small lizard. I jumped down into the creek bed with her and quickly realized this was no reptile but a tiny salamander, its skin glowing the color of a ripe lemon and lined with dark dashes. Its tiny, suction cup fingers clung to moist dirt, and its tiny turtle eyes seemed to look furtively around for predators. We had effectively eliminated its hiding place by pulling the rock away. I knew its skin needed to stay hydrated, so we did the best we could, depositing it in a muddy hole in the creek bank before moving on.

I set about Googling later and came up with a pretty similar likeness labeled “Chamberlain’s dwarf salamander.” Research on the species revealed an article on The Wildlife Society’s website, wildlife.org, quoting one Dr. Sean Graham, a Texas-based herpetologist, as having scoured North Georgia in vain for the species several years ago. Delighted to have solved Graham’s mystery with my single stab at herpetology, I tracked down his email and sent him an excited message to that effect. He promptly responded that this was still an open investigation, given the fact that I had found not a Chamberlain’s but “a very young, recently metamorphosed longtail salamander, Eurycea longicauda.”

He assured me that this salamander is still “very cool,” and he graciously agreed to discuss all salamanders in North Georgia in a phone interview. As we began our conversation, Graham told me he teaches at Sul Ross State University, located in a part of Texas he describes as similar to the setting of “No Country for Old Men.” However, he’s familiar with my part of Northwest Georgia because, as a Jonesboro, Georgia, native himself, he’s spent years trawling the state for salamanders.

I was surprised to hear him describe the Southern Appalachians as the world center for diversity in these creatures.

“You can see 16 species in several hours,” he said.

He did add that they’re a little harder to find outside the Great Smoky Mountains, but nevertheless, they’re still numerous where I live.

“Well then, why was this little yellow guy (or girl) such an unusual find for us?” I asked.

Graham explained that we’re not seeing salamanders every time we turn a rock over in a creek because they’re usually out at night.

“They don’t just come out in broad daylight like a lizard. I can guarantee if you went to the Pocket with a flashlight, you would see a ton,” he said, referencing the Pocket Recreation Area, the low-lying area between Mill and Horn mountains near my home.

Salamanders, he explained like rich, forested environments. Many species lay eggs in water with a larval stage individual that has “big, bushy gills.” Those that skip the larval stage for direct development lay eggs on land in mossy places.

Our young longtail, he explained, was a stream breeder. This species lays eggs during winter under rocks in wet areas, and the females stay with the eggs. Other popular salamander species in Northwest Georgia include two-lined, spotted (jet black with yellow dots) and marbled.

I asked Graham how landowners could be friendly to these little amphibians, and he stressed not eliminating their habitats. He explained that a lot of the water breeding species live in ephemeral wetlands, which the Environmental Protection Agency defines on nepis.epa.gov as low-lying places that hold water during only part of the year, typically spring and summer. The EPA says these wetlands do not contain fish, which like to eat salamanders. Graham’s advice to land owners includes refraining from stocking these areas with fish.

I looked at the photos on the site and realized that the area on the lower half of my property often looks similar to the pictured swampy places during these times of year. The stream we found our salamander in flows toward these areas.

I can see how property owners might be tempted to drain ephemeral wetlands because it’s impossible to use them for anything when they’re filled with water. Graham cautioned property owners against eliminating these habitats and to think more toward conservation.

“Be nice to your ephemeral wetlands,” he said. “Be happy that you have them.”

I have to say that I see these swampy areas differently now that I’ve learned more about their inhabitants. I also enjoyed talking with Graham. His descriptions of tromping through the unwelcoming tangle that is the North Georgia woods, eyes peeled for amphibious life, had me nodding and chuckling simultaneously. This interview was certainly not his first attempt at making herpetology approachable for the layman, and he said his book, “American Snakes,” is written with a large audience in mind, so I encourage you to check it out.

In the meantime, if you’re lucky enough to run across a salamander in the daytime, I hope you’ll enjoy the experience as much as we did.

Elizabeth Crumbly is a newspaper veteran and freelance writer. She lives in rural Northwest Georgia where she teaches riding lessons, writes and raises her family. She is a former editor of The Catoosa County News. You can correspond with her at www.collective-ink.com.