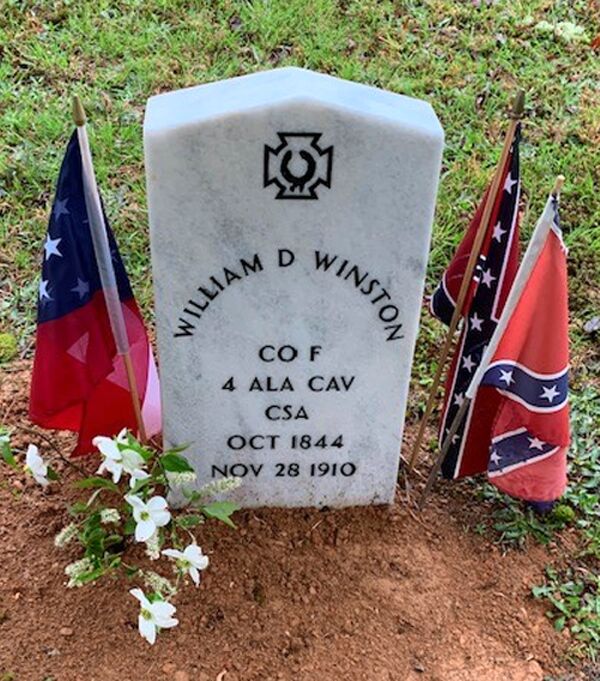 About 30 people attended the April 10 ceremony to unveil the new marker. 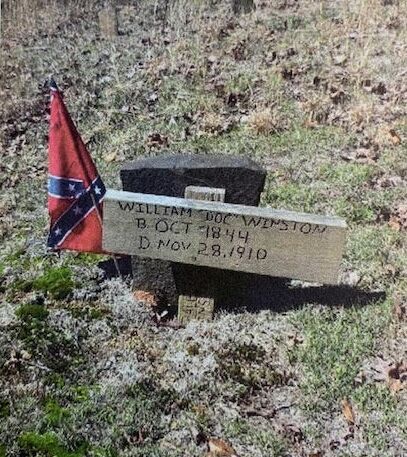 This fieldstone marker marked William D. “Doc” Winston’s grave. His niece made the wooden cross and placed it at his grave when she was 10 years old.

About 30 people attended the April 10 ceremony to unveil the new marker.

This fieldstone marker marked William D. “Doc” Winston’s grave. His niece made the wooden cross and placed it at his grave when she was 10 years old.

A Confederate Civil War veteran’s grave in the Estelle Cemetery in Walker County has received a new marker.

Joanie Jackson, a member of the Missionary Ridge (Chattanooga), Chapter 1777 of the United Daughters of the Confederacy, has been working on a personal project to place a first national flag of the Confederacy at every known Confederate grave in Walker County. So far, she said she has placed more than 160 flags.

“When placing some flags at the Estelle Cemetery off of Highway 193, I noticed that a veteran, Mr. William D. ‘Doc’ Winston, only had a fieldstone with his name/dates scratched on it as his headstone,” Jackson said.

She said she applied to the Veterans Administration to get him a military-issued Confederate headstone, the application was granted, and a headstone was delivered to her house. Winston died in 1910.

Joanie Jackson read the following speech at the marker dedication:

Maj. David F. Boyd of the 9th Louisiana Infantry of the Confederate States said, “He who feels no pride in his ancestors is unworthy to be remembered by his descendants.”

Mr. William D. Winston, known to his family as “Doc” was born in October 1844 in Tennessee. He enlisted on Oct. 1, 1862, as a private in Company F of the 4th Alabama Cavalry. The 4th Alabama saw military action in the battles of Lexington, Trenton, Jackson, Parker’s Cross Roads and Chickamauga, with later involvement in the Knoxville and Atlanta campaigns.

On his oath, Mr. Winston is described as having “fair complexion, light hair, was 5 feet 6 inches tall, and had brown eyes."

He came home and married Mary Ballinger on June 22, 1884, in Dade County, Georgia. I am told by his great niece, Christie Ballinger, that he and Mary raised Mary’s four brothers whose parents had died, one of which was Christie’s grandfather, Roy Ballinger.

Mr. Winston filed for a war pension in September 1902 when he was 58 years old and had “rheumatism, neuralgia, was feeble, and unable to work." Apparently he was not awarded the pension because he had to file again in January of 1907. He died on Nov. 29, 1910.

Mr. Winston must have been a well-liked and respected man in the community as attributed to the affidavits signed for his pension filing.

Today, we honor Mr. Winston’s service to the Confederacy and place a military headstone at his grave. A grave that was so long marked by a fieldstone with his name, date of birth and death scratched on it. Also marking the graves of Mr. Winston and his wife are handmade wooden crosses, made by Christie Ballinger when she was around 9 years old.

Thank you to Mr. Winston and all the veterans buried here at Estelle and across the United States for their service and sacrifice. We have not forgotten you.

The Latest: 100s of bodies found buried on India riverbanks

Mike Preston: No clear-cut favorite in AFC North, but Browns add some spice

Sideline Chatter: Seems like this pool hustle happens before the game is played