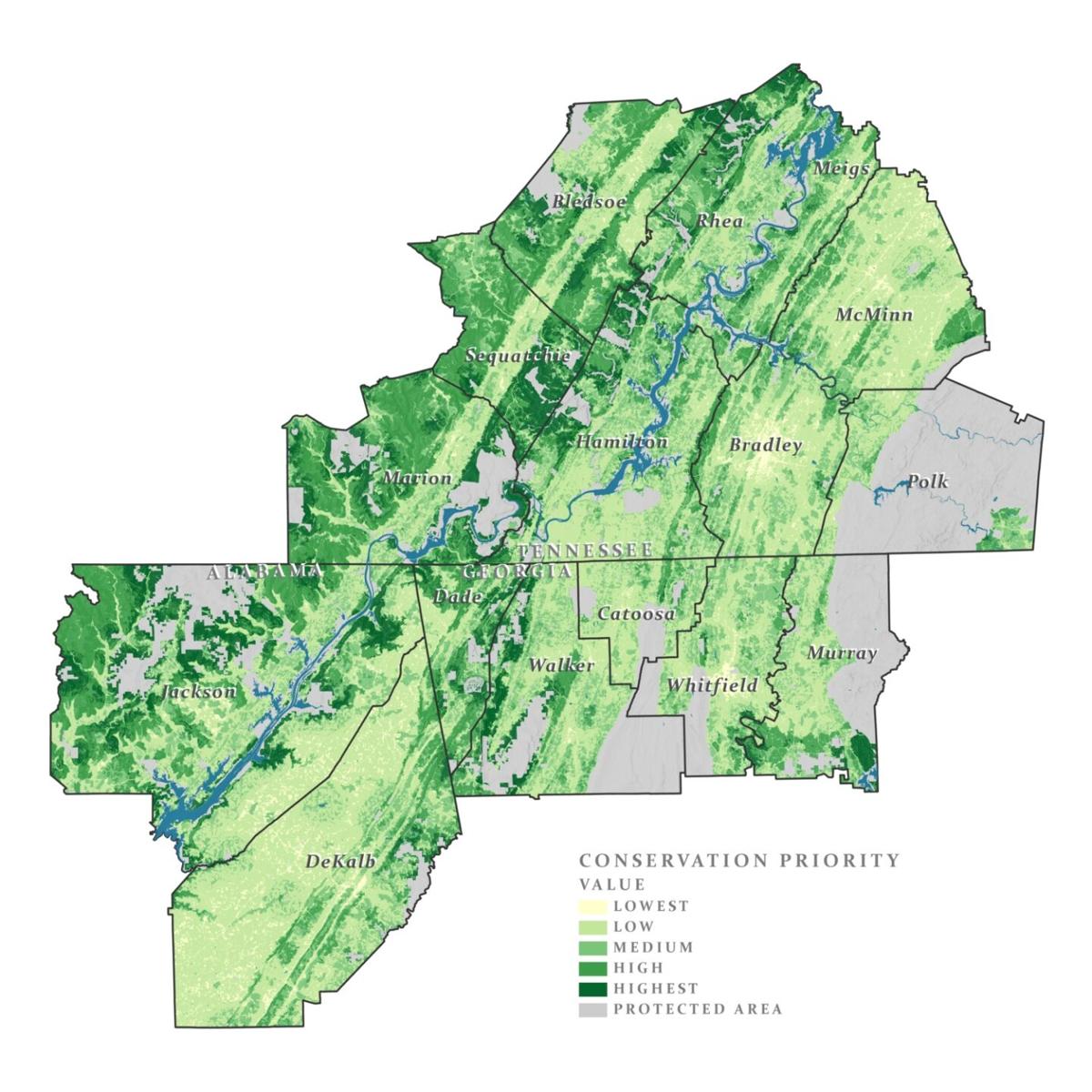 Seeking to accelerate land conservation along the Appalachian Mountains to counter climate change and its impacts, the Open Space Institute (OSI) Feb. 22 announced the launch of its $18 million Appalachian Landscapes Protection Fund (ALPF), which will focus, in part, on protecting key sections of Tennessee, Alabama and Georgia.

The ALPF, initially capitalized with $5.25 million in the tristate area, will provide grants to the local region for the acquisition of land and conservation easements to protect wildlife habitat and store carbon. Funded projects are also expected to improve recreational access and safeguard clean air and water.

Harnessing the critical role of forests to combat climate change, the ALPF aims to conserve at least 30,000 acres in the tristate area known locally as the Cradle of Southern Appalachia, a 7-million-acre region that has long been a priority for conservation. The ALPF will be guided by a conservation blueprint developed by Thrive Regional Partnership’s Natural Treasures Alliance, a regional collaboration of conservation groups, private businesses and citizens.

The Cradle of Southern Appalachia is one of three focus areas of the ALPF, which aims to conserve 50,000 acres along the spine of the Appalachian Mountains — home of the world’s largest broadleaf forest, which stores over half of U.S. forest carbon and serves as an essential climate refuge for plants and animals.

The other identified target areas of the ALPF are located in the Middle-Atlantic and Northern Appalachians. Altogether the ALPF seeks to distribute $18 million across the three focus areas, of which $12.5 million has been raised to date.

“The forests of the Southern Appalachians are not only critical for their natural and local heritage, they also protect the land that matters most as we take on the largest environmental challenge of our time — a changing climate,” said Kim Elliman, OSI president and CEO.

"On behalf of Thrive Regional Partnership, we would like to thank the thousands of citizens who took the time over the past several years to convey the importance of protecting natural treasures as a key priority for this region," said Daniel Carter, chair of Thrive Regional Partnership’s Natural Treasures Alliance. "This funding announcement is a direct result of what happens when citizens and local leaders come together to thoughtfully plan for our future."

The ALPF, aimed specifically at protecting some of the nation’s most biologically rich and climate-resilient landscapes, aligns with the federal government’s recently announced plan to conserve 30 percent of U.S. land and waters by the year 2030 to leverage natural climate solutions, protect biodiversity and slow extinction rates.

The Fund builds on more than a decade of successful conservation in the region. Since 2008, OSI has assisted in the protection of almost 40,000 acres of land in the Tennessee, Georgia and Alabama tristate area.

In order to achieve critical, climate-related conservation goals, OSI is providing grants and loans for the acquisition of land and conservation easements that will leverage an additional $66 million in matching public and private funds. The ALPF also advances efforts by states, local communities, Native American tribes and land trusts to align their conservation goals around climate priorities. The ALPF will ease funding requirements for organizations that identify as Black, Indigenous and People of Color-led that are at heightened risk of being negatively impacted by the climate crisis.

In addition to providing critical watershed protection, recreational opportunities and wildlife habitat, forests are a critical front-line defense against climate change. (Learn more by reading OSI’s Meeting the Challenge of Climate Change guide here.) In 2019, forests in the United States stored 59 billion metric tons of carbon — the equivalent of more than 33 years of U.S. economy-wide emissions. Every year, forests remove 15% of the country’s carbon dioxide emissions, equal to removing more than 673 million cars from the road.

The Appalachian Mountain region, stretching 2,000 miles from Alabama to Canada, contains vast swaths of healthy, older, larger and contiguous forests that are critical in combating climate change. These forests and rivers also provide tremendous benefits to society, including clean water, wood products, recreation and personal rejuvenation for millions of people.

Despite their critical importance to the nation, the forests of the Appalachian Mountains face significant threats, including development, poor management, and energy extraction. Nationally, U.S. forests are permanently lost at a rate of just under a million acres per year.

Partners in the effort

OSI’s conservation support within the Cradle of Southern Appalachia focus area will bolster the work of the Thrive Regional Partnership’s Natural Treasures Alliance. With the region’s population expected to double by mid-century and recognizing that economic health is inextricably linked to preserving intact natural systems, the Alliance calls for protection of a million additional acres of the area’s forestland over the next several decades. The resulting lands will be protected for climate, recreation, clean water and quality of life.

To expand the impact of the Fund, OSI is also turning to organizations such as American Forests, The Nature Conservancy and the Land Trust Alliance, to share expertise, amplify efforts and coordinate the Fund’s investments. OSI is also collaborating with eastern Climate Alliance states, a growing coalition of 25 states committed to achieving emissions reductions set by the Paris climate accord.

“The Appalachian Landscapes Protection Fund will apply cutting-edge science to safeguard some of the most resilient, carbon-rich, and biologically diverse forests in North America,” said Sacha Spector, program director for the environment at Doris Duke Charitable Foundation. “Over the past two decades, OSI has been leading the way with innovative, science-based efforts to protect the most biodiverse and climate-resilient places across the Eastern U.S.”

“To address climate change, we need to make sure we keep carbon in our forests and improve how we manage lands to sequester more carbon in order reduce harmful emissions,” said Jad Daley, president and CEO of American Forests. “The Fund is an invaluable tool in demonstrating and documenting the value of land conservation as a critical and necessary response to climate change.”

In considering lands for conservation, the ALPF is harnessing cutting-edge climate science developed by The Nature Conservancy to identify and protect places that are “climate-resilient” — in that they will continue to protect habitat for sensitive plants and animals, even as the climate changes. A property’s climate resilience will be the major selection criteria, and within these areas OSI aims to protect places with the highest carbon storage potential by 2050, to help meet Paris climate accord climate goals for carbon neutrality.

The ALPF is the second large-scale, climate-resilient land protection effort championed by OSI. From 2012-2020, OSI’s Resilient Landscapes Initiative (RLI), also supported by the Doris Duke Charitable Foundation, provided a total of $5.5 million to conserve 55,000 acres across the Eastern U.S. Through the RLI “Catalyst Program,” OSI also integrated climate science into more than 41 conservation plans by land trusts and public-private partnerships and disseminated training materials and case studies to more than 1,300 practitioners.

Stocks are off to a mixed start on Wall Street, yields rise

The Latest: Czech Republic gets patient help from nations