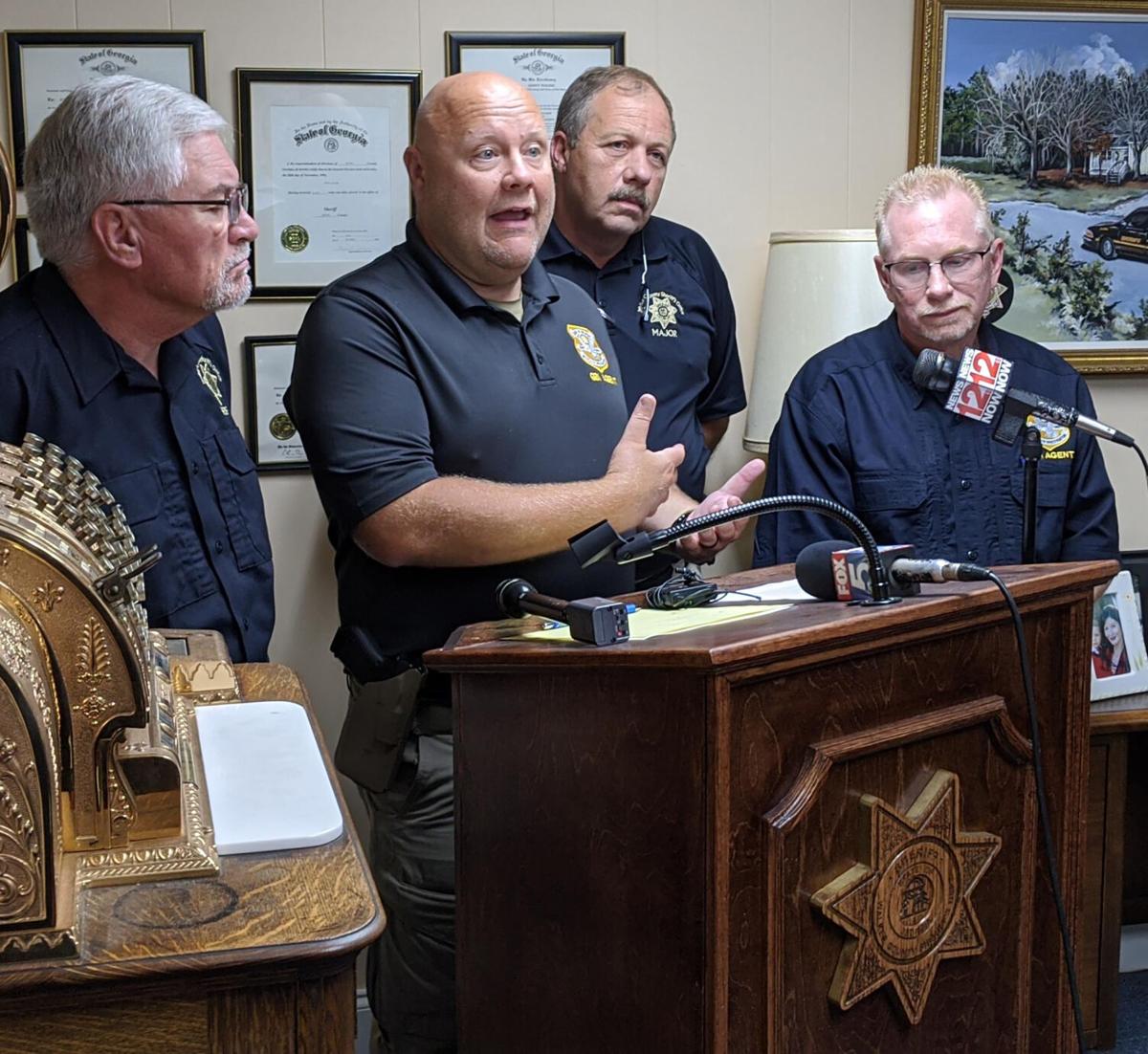 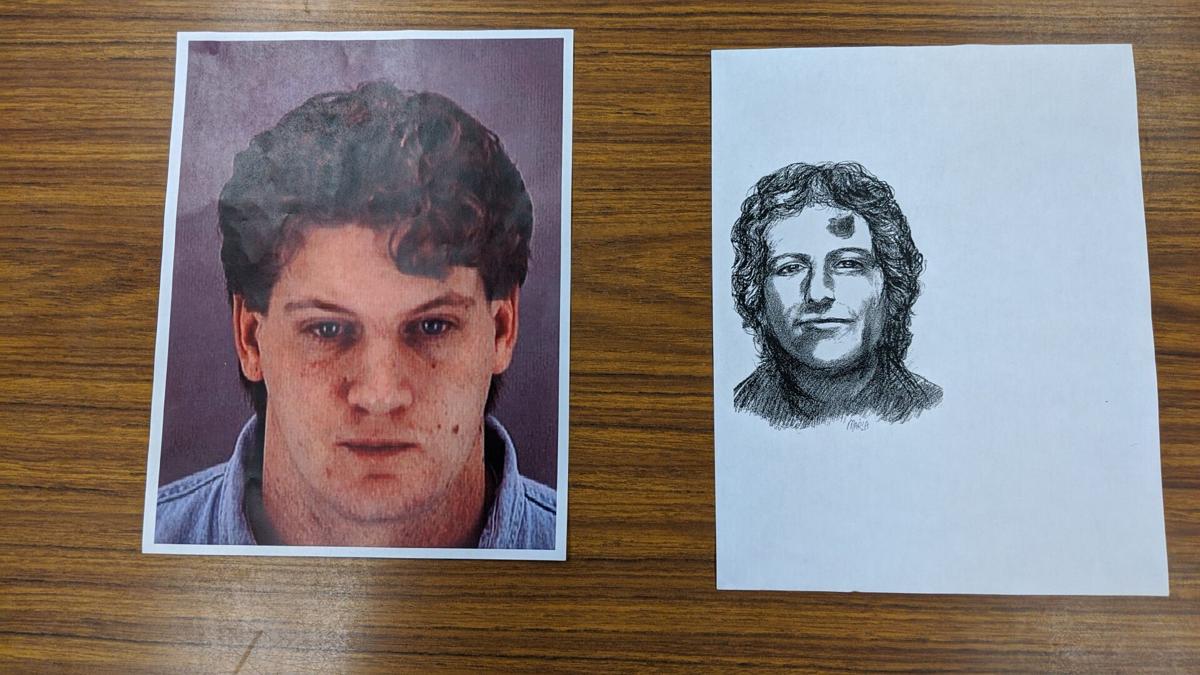 At right is a GBI composite drawn in 1994 of a possible suspect in the James Harris murder case. At left is a 1996 photo of Robert Allen Mowry, who was arrested in Nashville.

At right is a GBI composite drawn in 1994 of a possible suspect in the James Harris murder case. At left is a 1996 photo of Robert Allen Mowry, who was arrested in Nashville.

Authorities on Friday arrested a man for the 1994 murder of a Chickamauga man, officials announced Saturday in a news conference at the Walker County Sheriff’s Office in LaFayette.

Robert Allen Mowry, 50, of Tullahoma, Tenn., has been charged with malice murder for the death of 54-year-old James Richard Harris.

Tennessee Bureau of Investigation (TBI) officials arrested Mowry about 10 p.m. in Nashville, not far from the metropolitan airport.

Harris was found dead on Dec. 22, 1994, at the entrance to his property and residence on Boss Road in Chickamauga. He had been murdered and robbed by the gate of his property as he was leaving for work. At the time, Harris worked at Miller Industries in Chattanooga.

Officials said that in 2009 investigators received information from Crime Stoppers about the murderer’s possible identity. Using a Georgia Bureau of Investigation (GBI) composite of a possible suspect drawn in 1994, along with a 1996 photo of Mowry, authorities were able to start connecting the dots.

The GBI, Walker County Sheriff’s Office, and the Chattanooga Police Department pursued additional leads which brought the case closer to a resolution; however, there was not enough evidence to make an arrest.

“He was a young detective in 1994,” Wilson said. “He was assigned the case and so for almost 26 years he has lived this case.

“I’m happy for him that he’s able to see it come to this point,” Wilson said.

Montgomery said officials received information from Crime Stoppers in 2009 that “kind of narrowed our scope.”

“Basically through all the interviews, the surveillances, and the gathering of evidence we were able to obtain evidence on Mr. Mowry that led back to the original evidence from the original crime scene,” Montgomery said.

He said Mowry worked at Miller Industries with Harris.

Through the years, Crime Stopper has kept the case in the public eye, he said.

“Major Freeman lived with this case and was the driving force behind it,” he said. “When it got to the point where I couldn’t carry the ball over the goal line, Agent Nicholson picked it up and took it for me. And so my hat is off to him.”

He said Freeman “never gave up.”

“After 26 years, it’s such a great thing to be able to come here today and to say this case is solved and that the right person has been arrested for this crime,” he said.

Freeman said the case stuck with him from day one, but not without some doubts of it being solved.

“I don’t even really know where to begin,” Freeman said. “I had been a detective one month when I was assigned this case. I’m glad I was a much younger man at the time to be able to have the energy to put into this. There’s a lot of times I really, really thought it would never be solved. I wanted to give up. I thought, ‘you know, I don’t have the energy for this.’ My assignments had changed over the years. I had other responsibilities. But I never could let it go.”

Freeman said hundreds of law enforcement and others have worked on the case.

“I want to thank this family of Mr. Harris, for their patience over the years and never giving up on us,” he said

“These cases,” Montgomery said. “need justice and we need to give these families some closure. And today the Harris family will have closure.”

Nicholson said the Crime Stoppers tip in 2009 is what put investigators on right trail, emphasizing that the partnership between various agencies and individuals is the key to solving such cases. Thousands of tips were looked at in this case, he said.

“So if you take that and multiply it times 26, that’s a lot of death cases,” he said. “So you’re constantly going from one to the other. It’s very rare that we have time to come back and focus on these cases. We try to make as much effort as we can to go back to these original cases and rework them. So when we got the tip that led us to Mr. Mowry and we got to looking at the composite, it kind of helped us go in the right direction and got us to where we are today.”

Where IS ruled, pope calls on Christians to forgive, rebuild

LSU vs. Oral Roberts, Sunday: Who's starting, how to watch, what to watch for

Led by Landon Marceaux, LSU rebounds to even series with Oral Roberts

Migrating California gulls an 'amazing sight,' but some High Desert residents see only a 'messy nuisance'