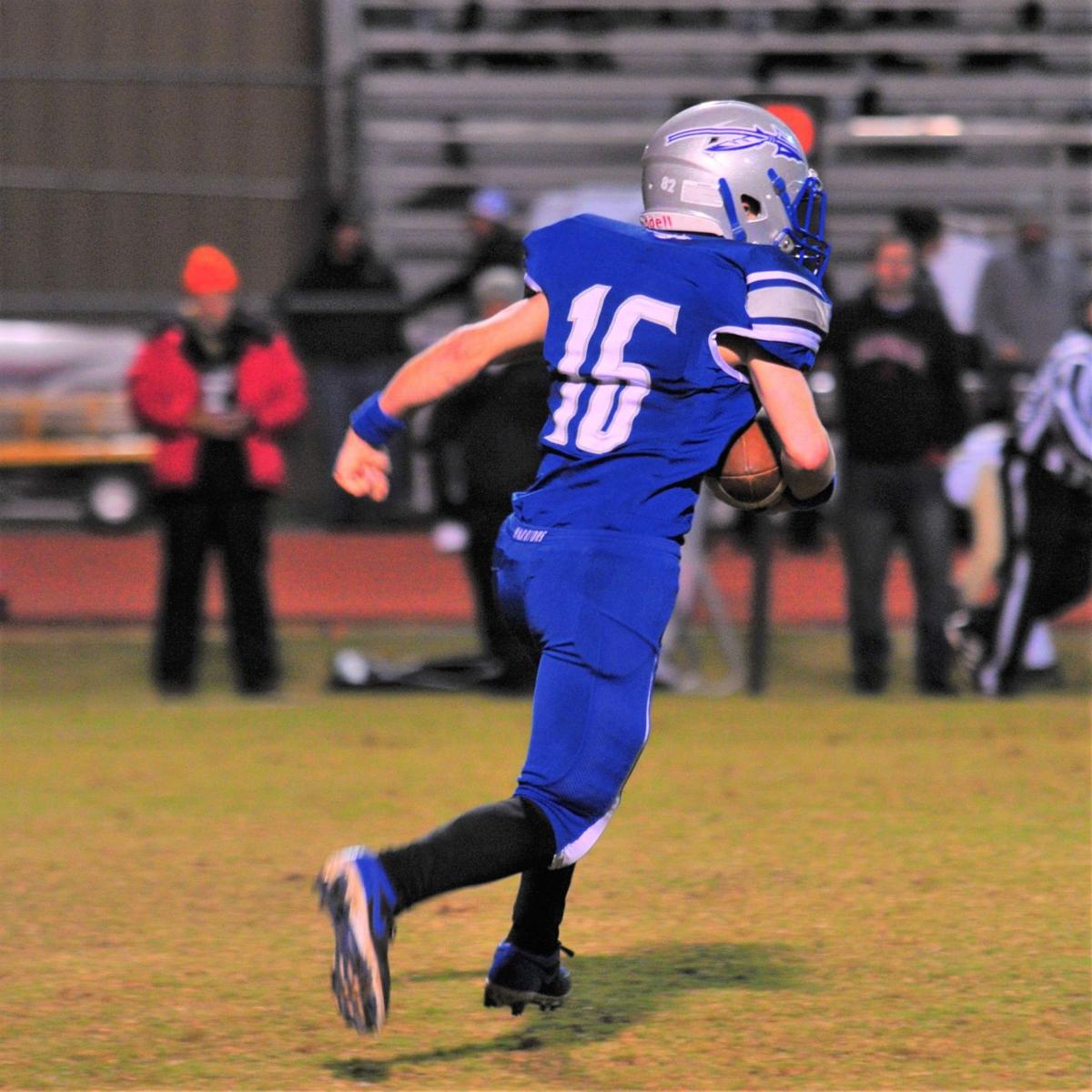 Gordon Central’s Jesse Walters takes off toward the end zone for a Warriors touchdown against the Rockmart Yellow Jackets at Ratner Memorial Stadium on Friday, Nov. 1. 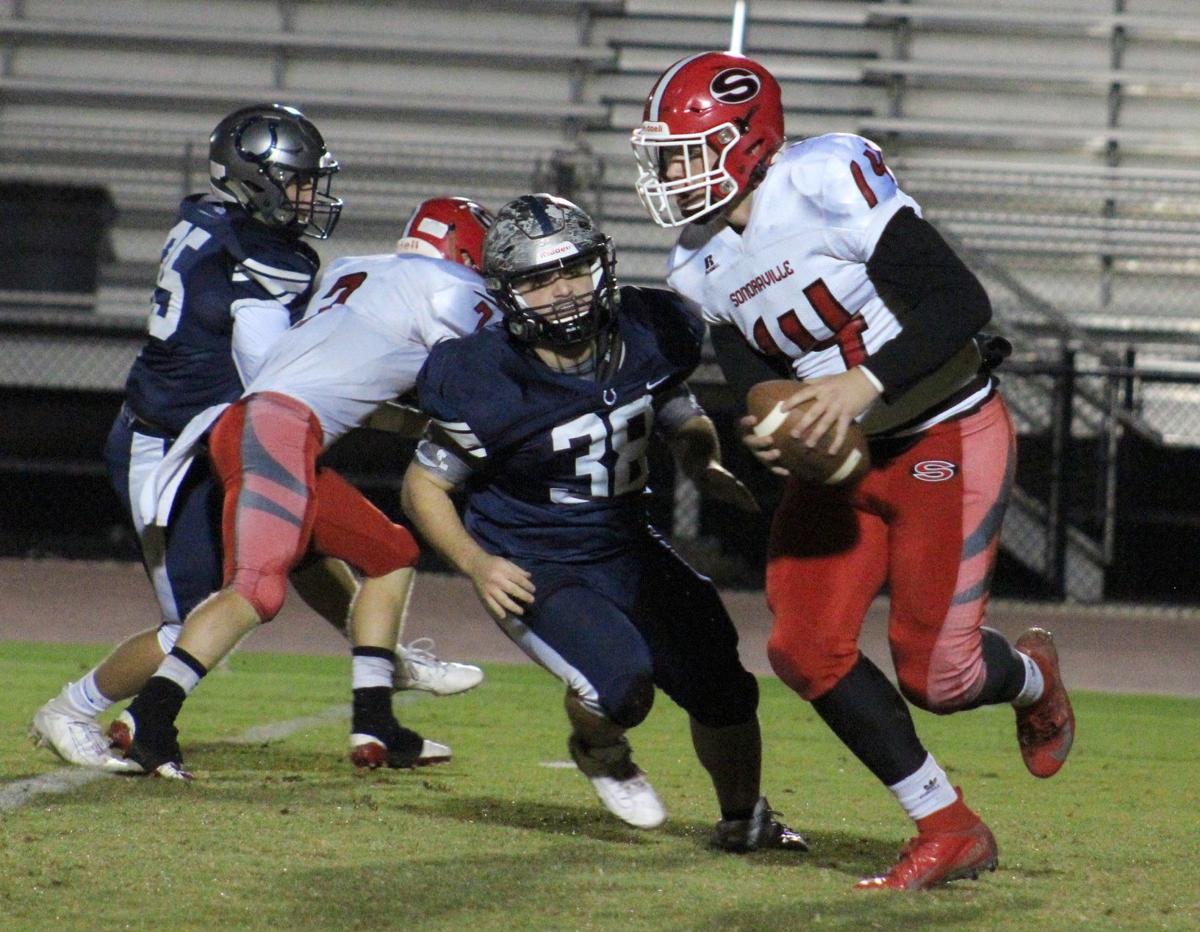 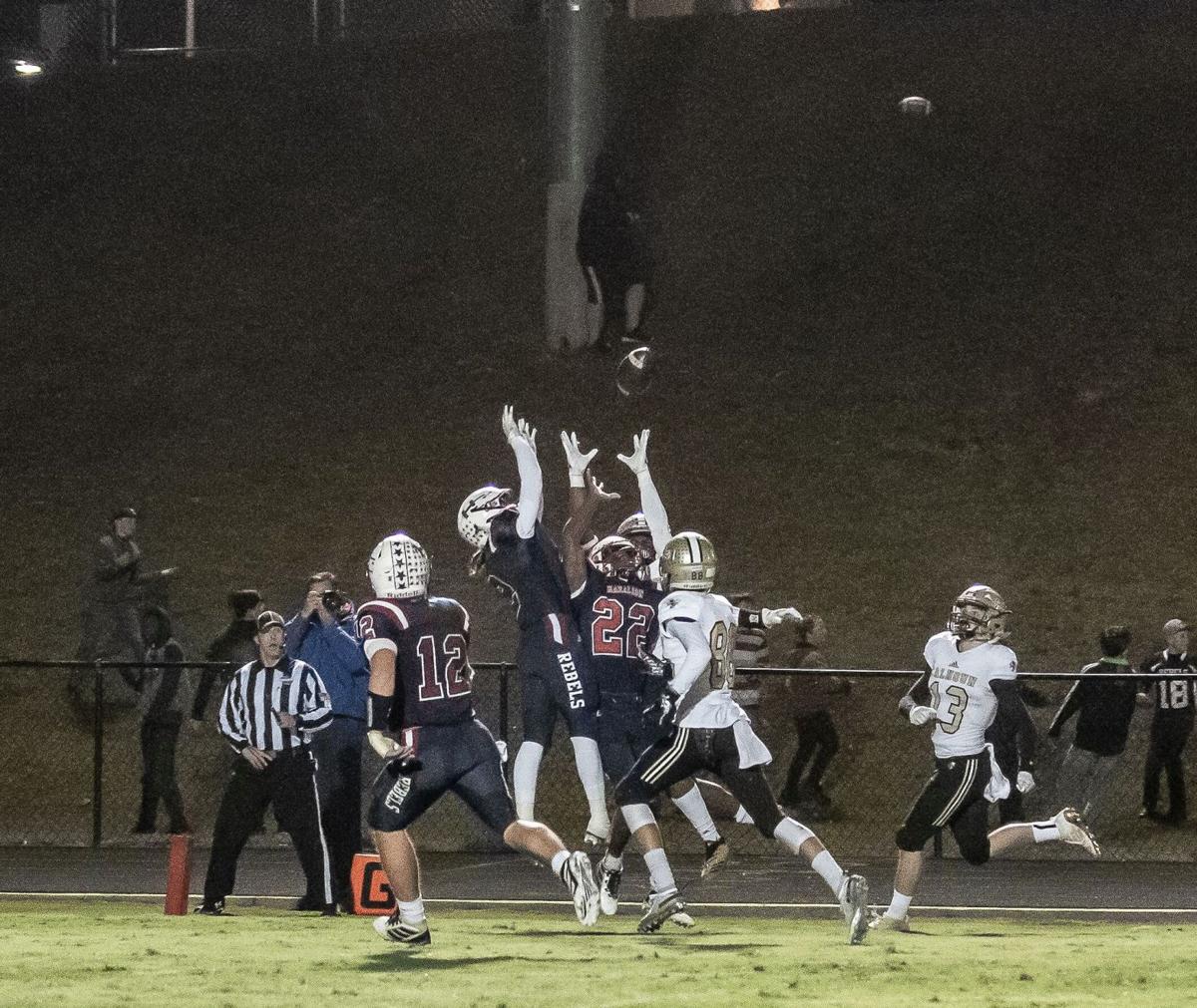 Calhoun senior quarterback Jake Morrow throws a pass to the end zone at the end of the first half against the Haralson County Rebels. This picture captures moments before Morrow’s pass is tipped and caught by senior Grant Gilmer (13) for a touchdown to close the first half.

Gordon Central’s Jesse Walters takes off toward the end zone for a Warriors touchdown against the Rockmart Yellow Jackets at Ratner Memorial Stadium on Friday, Nov. 1.

Calhoun senior quarterback Jake Morrow throws a pass to the end zone at the end of the first half against the Haralson County Rebels. This picture captures moments before Morrow’s pass is tipped and caught by senior Grant Gilmer (13) for a touchdown to close the first half.

Well, here we are. Twelve weeks ago we kicked off Gordon County varsity football with Calhoun facing Ridgeland in the 2019 Corky Kell Classic. This Friday, the regular season will end, but a definitive is the county will be represented in the GHSA state playoffs. The question that remains is: How many teams will be playing on Nov. 15?

Below, we break down the Week 12 region matchups: Calhoun at Lakeview-Fort Oglethorpe, Gordon Central at Coosa, and Sonoraville at North Murray.

The Calhoun Yellow Jackets (8-1, 6-1 region) have secured second place in Region 6-AAA after a come-from-behind 28-14 win at Haralson County last Friday night. While Calhoun’s 18-year region title streak has ended, the Jackets have not only secured a spot in the playoffs, but have earned a first-round home playoff game at Hal Lamb Field at Phil Reeve Stadium on Friday, Nov. 15.

Before we get there, however, Calhoun battles the Lakeview-Fort Oglethopre Warriors (4-5, 4-3 region) in Catoosa County this coming Friday. LFO is coming off a 31-0 loss to North Murray, which secured Region Six for the Mountaineers.

Expect the Morrow-Hames duo to be on display Friday against a Warriors team that has surrendered 57 points in its previous two games.

After surrendering two first-half touchdowns to the Haralson County triple option, the Yellow Jacket defense locked it down, allowing just 53 yards to the Rebels the entire second half. LFO turned the ball over five times last Friday against the Mountaineers, so the stout Calhoun defense can create turnovers.

Kickoff from Fort Oglethorpe is scheduled for 7:30 p.m.

Last week, the highlight for the Warriors was undoubtedly Jesse Walters’ 75-yard touchdown run against the Rockmart Yellow Jackets on senior night.

Gordon Central’s offense can bounce back this week against an Eagles team that has surrendered an average of 39 points to region opponents.

Defensively, the Warriors present problems to Coosa’s struggling offense, as the Eagles have only eclipsed 14 points twice this season.

Kickoff at Coosa High School is scheduled for 7:30 p.m.

It all comes down to Friday. The Sonoraville Phoenix (5-4, 4-3 region) head into their final game of the 2019 regular season against region-undefeated North Murray (8-1, 7-0 region) with an opportunity to go to the playoffs.

For Phoenix fans, a game you will want to keep a close eye on (in addition to Sonoraville-North Murray) is Calhoun at Lakeview-Fort Oglethorpe.

Both Sonoraville and LFO are tied at 4-3 in region standings, with the fourth place (and last playoff) spot up for grabs. Fortunate for the Phoenix, score differential in head-to-head contests.

With a maximum of 12 points that can be taken from head-to-head contests in determining tiebreakers, Sonoraville is at +11 (with a +12-point win over Adairsville and one-point loss to LFO), LFO at 0 and Adairsville at -11.

This weighs on which team will qualify for the postseason. The higher the number will determine which team moves on.

Because of this, LFO must beat region second-best Calhoun to earn a berth in the playoffs. Conversely, a Yellow Jacket victory would see Sonoraville leapfrog LFO and capture fourth place in the region to move on to the postseason, regardless of the result of its game against North Murray.

In short, Sonoraville can afford a loss and still qualify for the playoffs. LFO cannot.

Don’t discount the Phoenix, though, as an upset at North Murray is possible. This is a tall order, though, as the Mountaineers have won eight straight and have not conceded more than 17 points in region game. North Murray shut out LFO 31-0 last Friday in Fort Oglethorpe.

Junior quarterback Brady Lackey has been a consistent dual-threat presence under center, while brothers Blade Bryant (senior) and Brant Bryant (freshman) have racked up yards — and points — for the Phoenix this year.

A road win at North Murray would provide the Phoenix a huge boost of confidence heading into the state playoffs for the first time since 2016.

The only way Sonoraville does not make the state playoffs is if the Warriors beat the Yellow Jackets and the Phoenix lose to the Mountaineers.

Kickoff from North Murray High School is slated for 7:30 p.m.