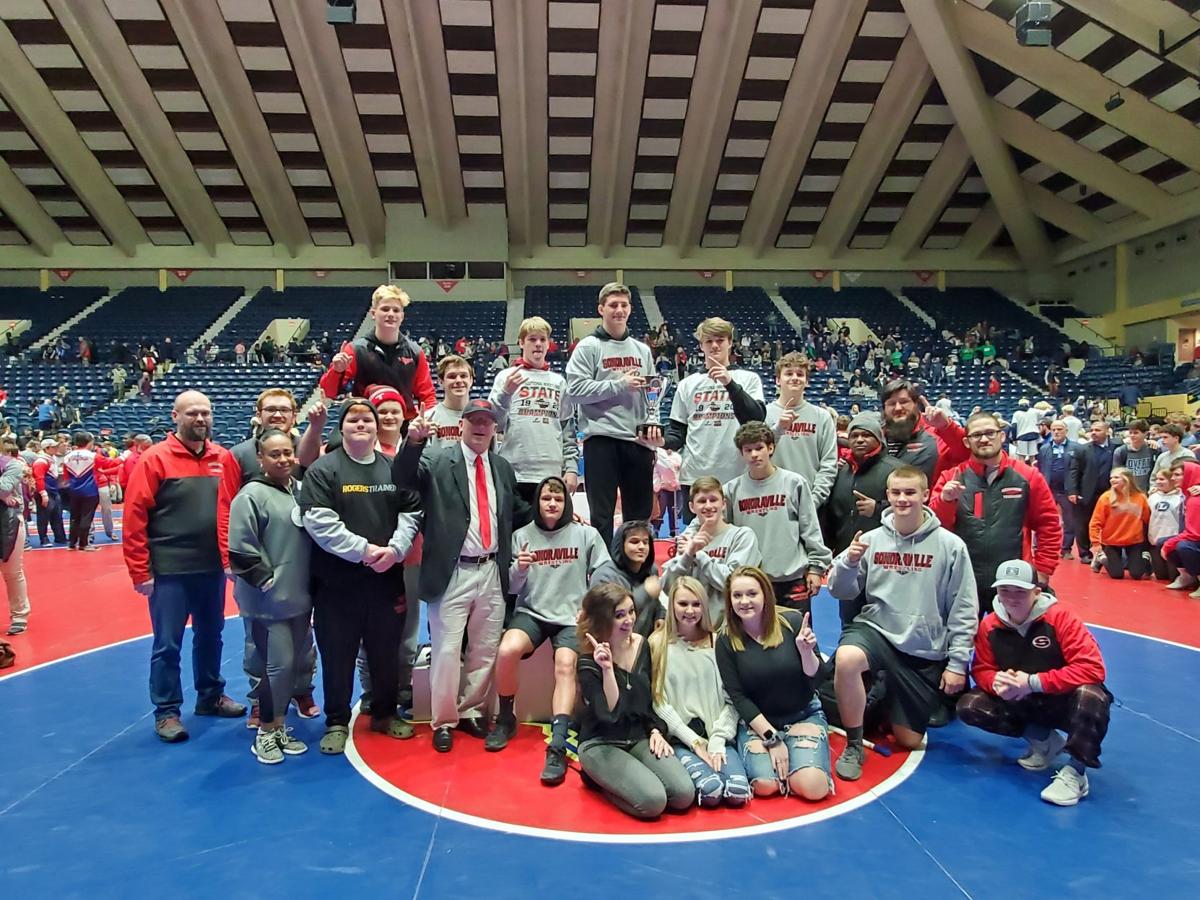 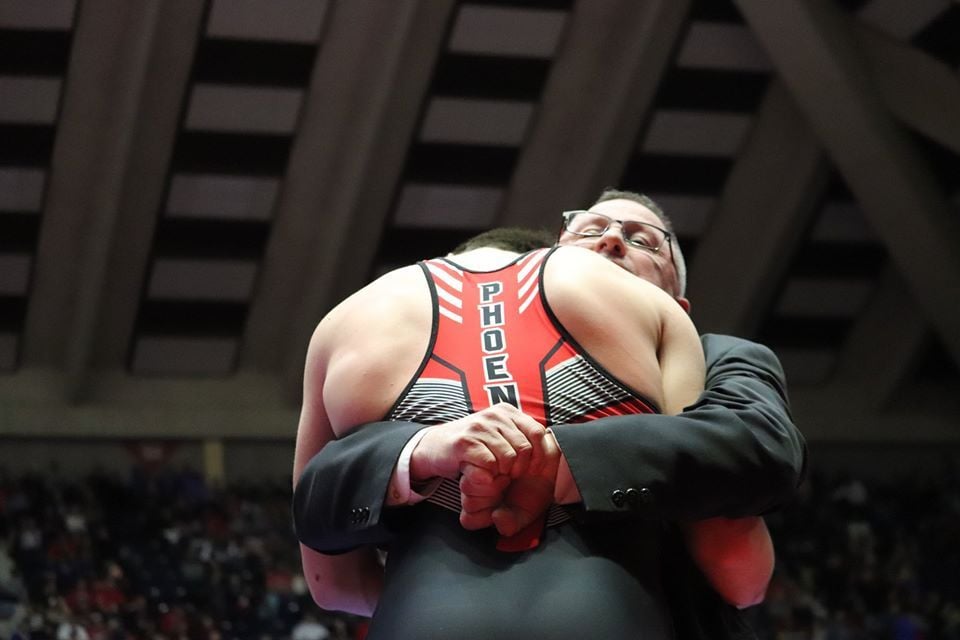 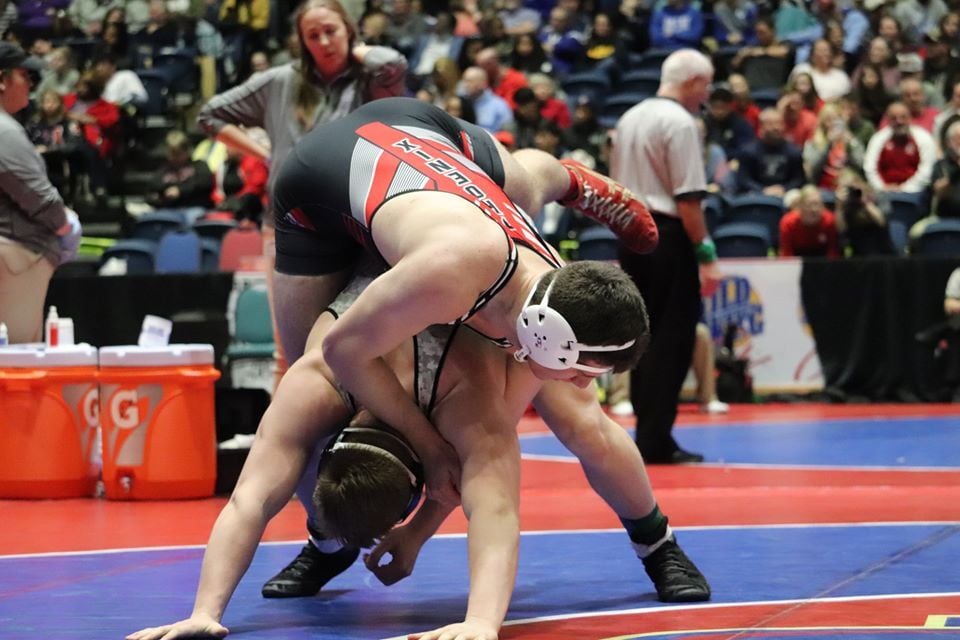 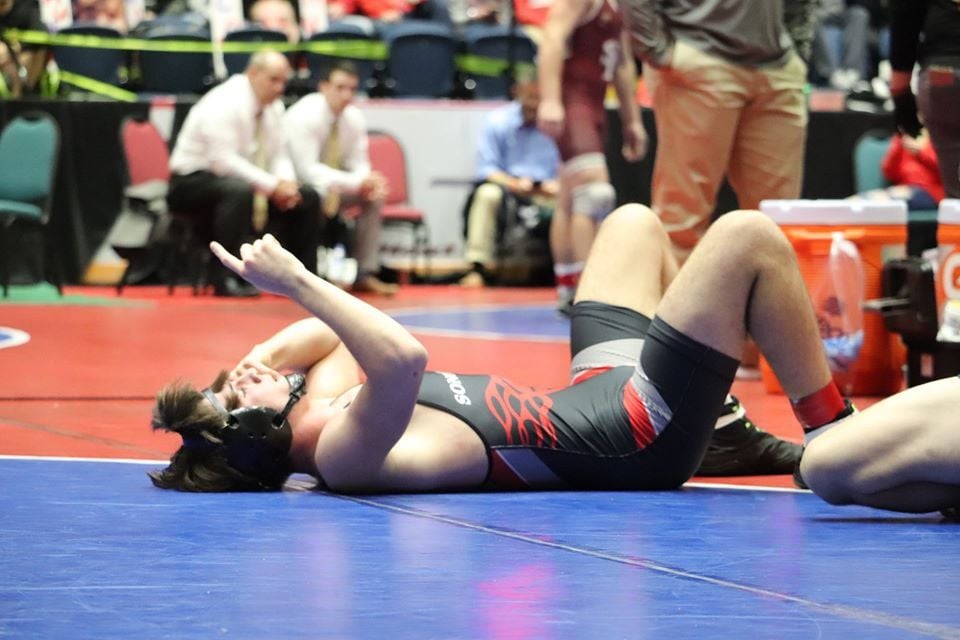 Sonoraville’s Jeb Knight points toward the sky during his 170lb championship bout against Lovett’s John Thomas Brooks at the Macon Coliseum on Saturday, Feb. 15. 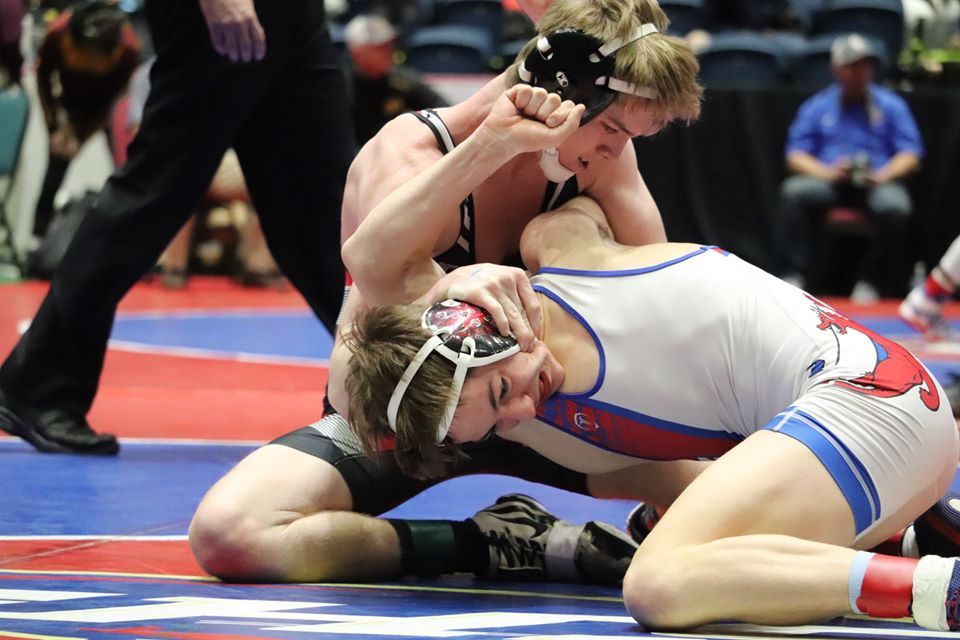 Sonoraville’s Eli Knight battles Jefferson’s Mason Mingus during the 136lb Class AAA championship bout. Knight would be one of three Phoenix to win a state championship on Saturday. 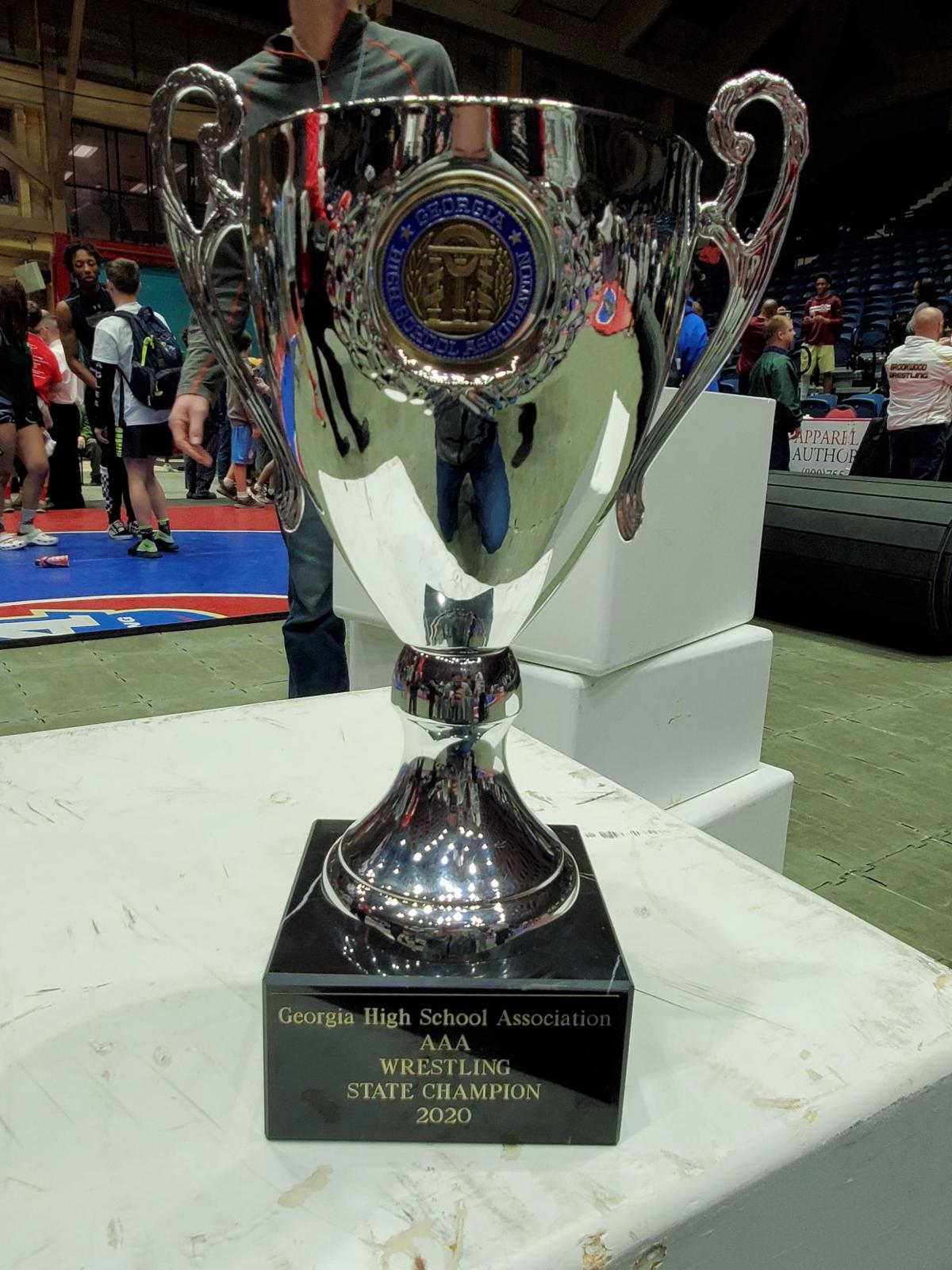 Sonoraville’s newest edition to the trophy case, seen here at the Macon Coliseum on Saturday, Feb. 15.

Sonoraville’s Jeb Knight points toward the sky during his 170lb championship bout against Lovett’s John Thomas Brooks at the Macon Coliseum on Saturday, Feb. 15.

Sonoraville’s Eli Knight battles Jefferson’s Mason Mingus during the 136lb Class AAA championship bout. Knight would be one of three Phoenix to win a state championship on Saturday.

Sonoraville’s newest edition to the trophy case, seen here at the Macon Coliseum on Saturday, Feb. 15.

Randy Steward walked back toward Mat 3 at the Macon Coliseum and held up three fingers to the Phoenix faithful.

"It's over," Sonoraville's wrestling coach said.

Sonoraville's last wrestler to compete, Charlie Brown at 195, had not even taken the mat yet and the Phoenix, or Firebirds as they have been branded, had achieved yet another remarkable milestone in a short period of time.

"When I came in, ... I came in with a strong group of freshman. First group I worked with; they're all seniors now," Steward said. "I wanted them all to go out on top. To me, that's probably the most satisfying thing. They got to experience it one more time. This one ... I'm going to collapse tomorrow."

"That little experience when a kid wins like that, Jeb winning it and knewing we sealed the team title, you can't even describe it," Steward said. "It's a high. You can't describe it, it's so good."

Steward said he didn't immediately know after Jeb's victory the title would be returning to Gordon County, but got the news shortly thereafter.

"I was just happy we won," Steward said. "Coach Huf kept saying 'Coach, it's over,' and I kept saying 'I know the match is over.' He meant the tournament's over."

Steward said the feeling of the three peat would take time to set in.

Sonoraville held a slim lead over North Hall, as there was plenty of work to be done on the final day of the season to lock up a third state title.

"We have a history of not wrestling well on Saturday morning, and history repeated itself," Steward said. "We had five matches, I think we won two (at that point). I was hoping we could get a little more of a lead built up."

Entering the final day of competition, Sonoraville would have five wrestlers compete for individual state titles. North Hall, close behind in second place, had four taking the mat.

"They tied it at 152 (pound weight class), I knew they were done because (Dalton Battle) was their last kid," Steward said. "We still had two left. We had to win matches and that's the bottom line. There's no big secret in what you've got to do."

Steward said getting five wrestlers into the finals put the Phoenix in the position for the possible three peat.

"I made a big deal out of it the last three years," Steward said. "We've got to make a big run on Friday. Last year, we opened up a huge lead and they came back and we were able to hang on. This time, the lead wasn't as big, but still, we set ourselves up and put ourselves in a position. That was critical."

"A year ago today, he got beat in the finals," Steward said. "He said 'Coach, I'm going to come in here next year and I'm going to tap my kid in the finals.' He reminded me of that today too, and he did. He's a special kid and he wins his second state title."

The mood was quite different from four weeks prior, when the Phoenix lost to North Hall in the duals title (which happened to be on a Saturday), taking state runner up. As the shudder clicked, a blank expression stared back. Steward said January's results in Macon added fuel to the fire, as everyone desired to end 2019-20 on the highest note possible.

"They physically beat the crap out of us," Steward said. "We hadn't been beat like that since I've been here, so I was concerned. But again, it's not head-to-head here. It's just a different deal. I thrive on this one. I like the individual part of it."

"It's the same joy doing it. That's why I'm still doing it," Steward continued. "I work all-year long, we wrestle all spring, we wrestle in the summer ..., for two hours of joy on a February afternoon. It's still worth it to me."

This time around, though, it was all smiles for the team photo as Sonoraville prepared to bring home yet another trophy to add to a growing display case.

"If you could bottle this, how you feel right now, it's priceless," Steward said.

Steward himself got quite the surprise when his brother, who lives in Sioux City, Iowa, made the lengthy journey south to Macon to see the Phoenix, and his brother, earn another set of rings.

"I see him two or three times a year, if we're lucky," Steward said. "I wanted him to see this. I'm glad he got to sit and watch this whole day because that makes it even more special that he got to be here and see it."

With another trophy in hand, the Phoenix exited through the coliseum doors ready to celebrate. The post-tournament destination was already known.

"Every year, we go to the Ole Country Buffet," Steward said. "We found it ... three years ago. We were looking for a place to eat. We got second, my first year. Parents come. Just have fun. They can eat and be silly. I get up and talk a little bit and just celebrate."

Now that the season has concluded, the Firebirds get to plan hanging up another banner.

In addition, the team has to hammer out what kind of bling they want for their rings. What style, specs, etc. And for some, what finger to get the state champions ring fitted for.

So how did it all happen for a third time in three years?

At the end of the year, the Firebirds have done just that. Three state championships, three trophies, three banners in a row. This senior class? Three team titles in four years.

And, yes, it's super early to think about this, but next year, the Phoenix go for four in a row. That senior class would be 4-for-4. Can you imagine? Staggering. Good thing you have 10 fingers.