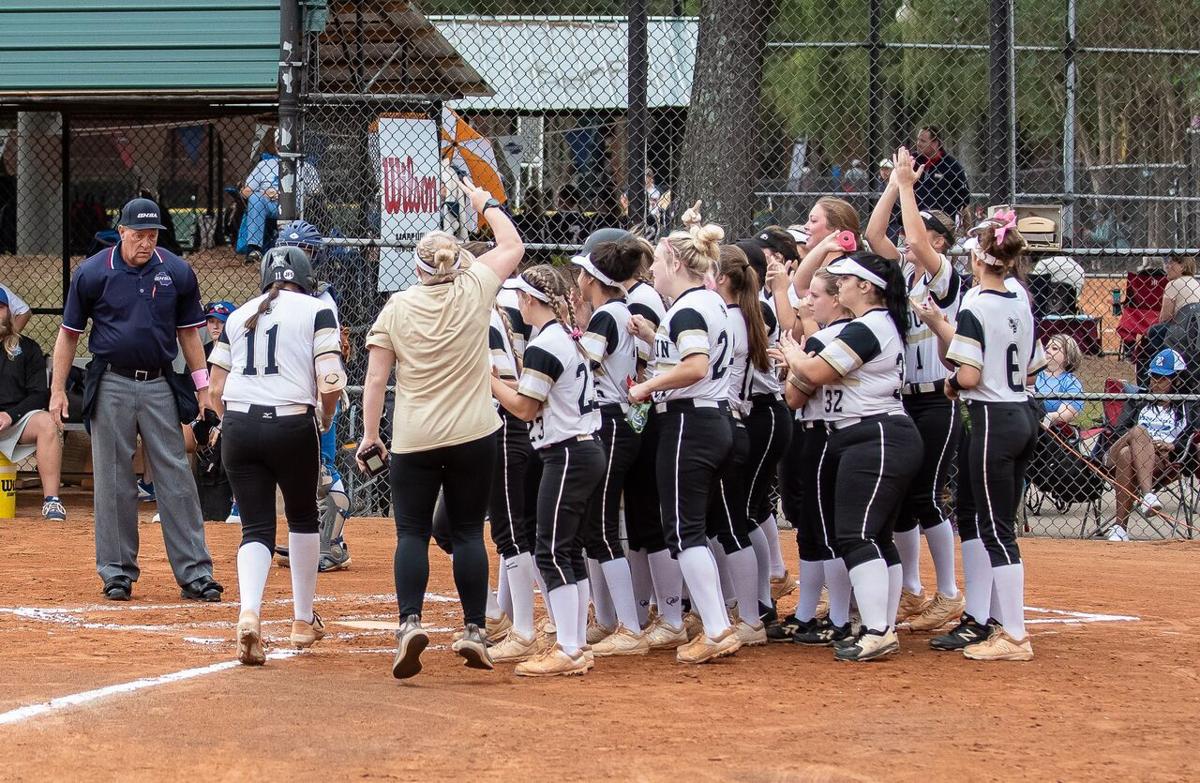 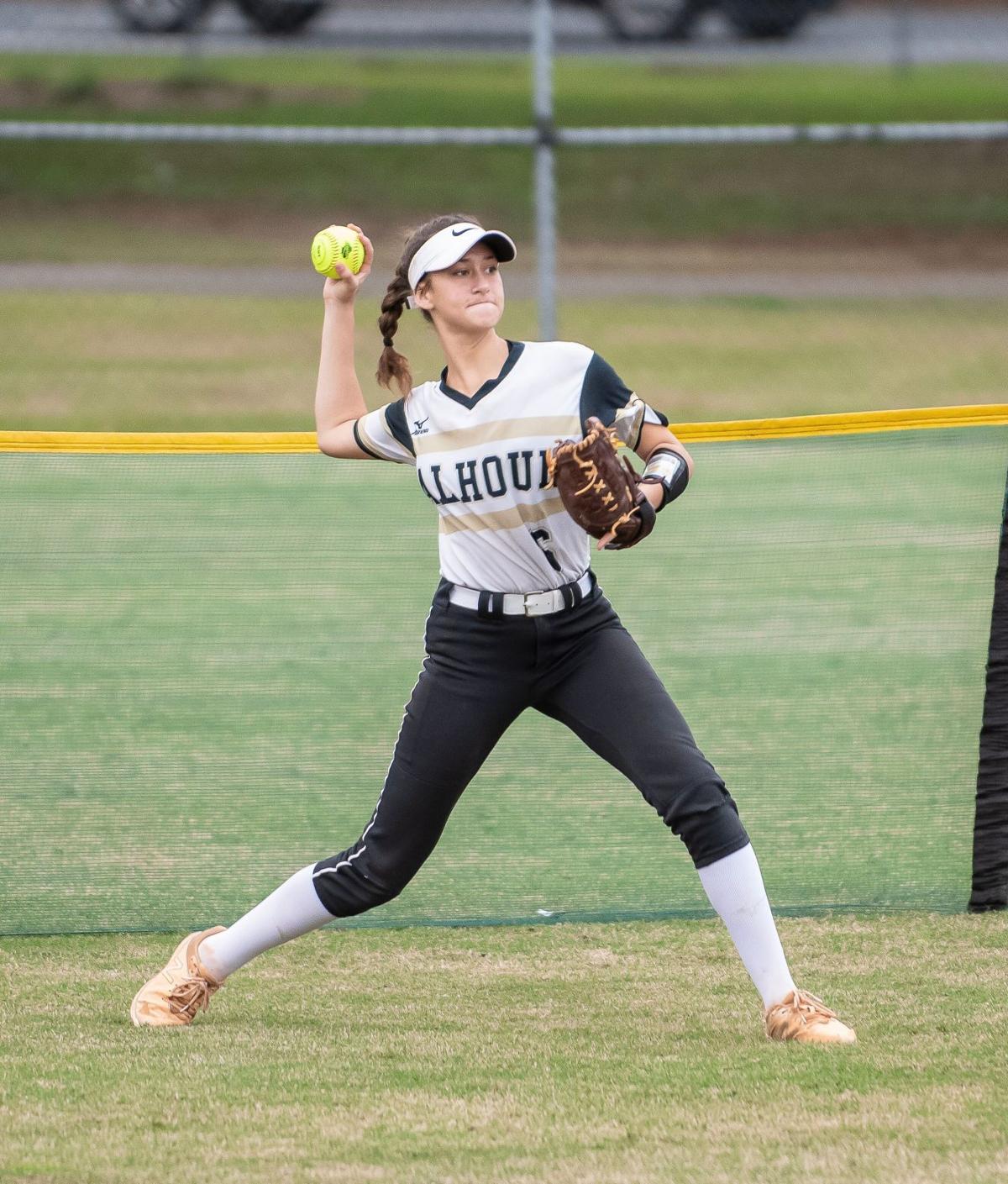 Calhoun junior Hannah Mashburn during the 2019 fast-pitch softball state tournament in Columbus. Mashburn is one of 16 girls on the slow-pitch team this spring. 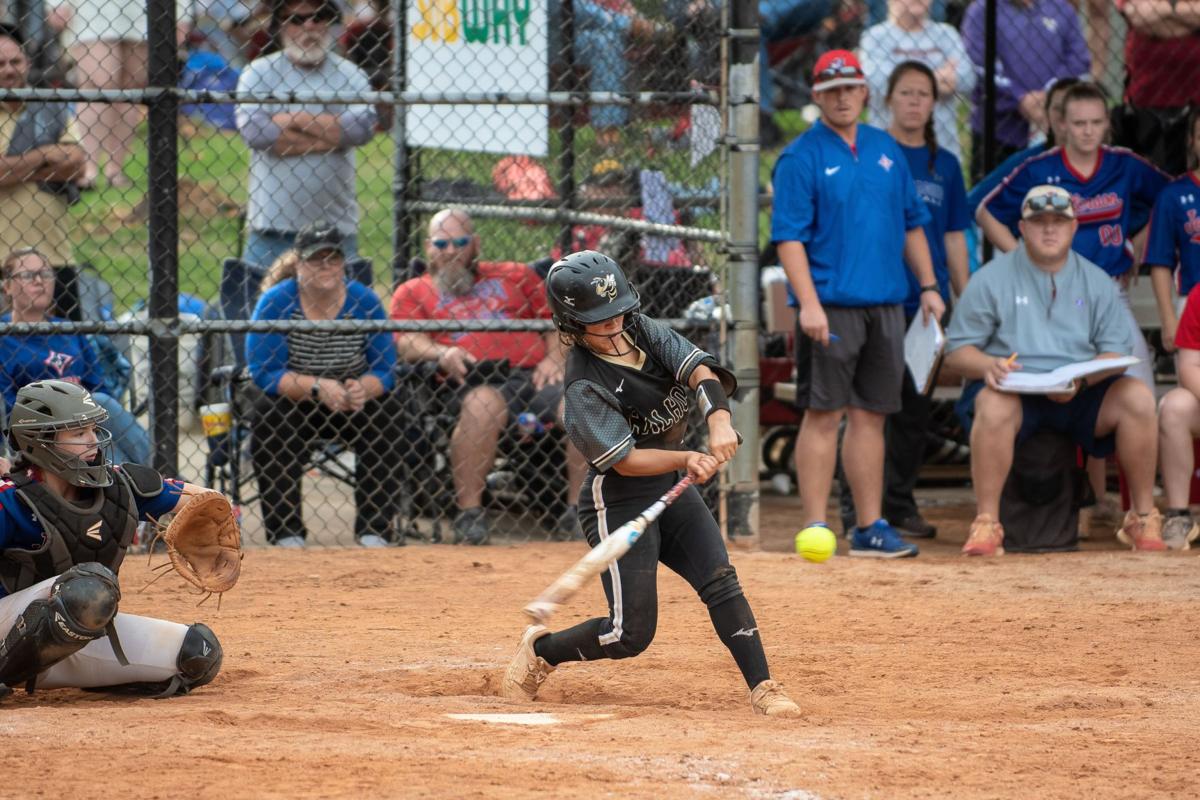 Calhoun sophomore Espey Reyes hits a two-run RBI single in the top of the seventh inning to give the Lady Jackets a 8-7 lead over Jefferson at the South Commons Softball Complex on Friday, Oct. 25 in Columbus. Calhoun would win the game 10-7.

Calhoun junior Hannah Mashburn during the 2019 fast-pitch softball state tournament in Columbus. Mashburn is one of 16 girls on the slow-pitch team this spring.

Calhoun sophomore Espey Reyes hits a two-run RBI single in the top of the seventh inning to give the Lady Jackets a 8-7 lead over Jefferson at the South Commons Softball Complex on Friday, Oct. 25 in Columbus. Calhoun would win the game 10-7.

In recent years, the arrival of March usually coincides with baseball, soccer and track and field seasons in full swing, with region games on the horizon. However, this year debuts a sport making its first mark at Calhoun High School since the start of the millennium: slow-pitch softball.

In just a matter of days, the Calhoun Lady Jackets will suit up for a new beginning, one that they hope will be just the start of something new. But one Lady Jacket in particular is no stranger to slow pitch. Diane Smith, Calhoun’s longtime head softball coach, will lead a slow-pitch team for the first time since 1999.

“I went to (Athletic Director) Brock Holley and expressed interest in having a slow pitch team,” Smith said in an emailed statement. “I had already spoken with Bret Greene who said he would be glad to help, and we had enough girls interested in playing. Mr. Holley was on board as well as Principal Peter Coombe.”

Three years ago, the GHSA brought back slow-pitch softball. Smith had an immediate interest, but at the time did not pursue due to caring for her husband, the late Jerry Smith.

“Since the passing of my husband … I had a lot of time on my hands and I needed to be around the girls and stay busy,” Smith said. “I love being around them even though they make me want to pull my hair out sometimes. They make me laugh.”

So who’s been making Smith laugh and/or pull her hair out? It turns out the entire team is made up of fast-pitch players from the fall.

“It thrilled me to death to see 16 girls show up to play,” Smith said. “Playing slow pitch is going to help us defensively in fast pitch. Everyone had better be on their toes because they will get some action. I’m excited because I’m getting to do something I love in the fall and in the spring.”

So what are some differences between slow and fast pitch? Probably the most obvious is the speed pitch.

Beyond that, though, there are differences in numbers. For example, there are 10 defensive positions, with four outfielders as opposed to three in the fast-pitch game. Teams can play with nine, 10 or 11 athletes. Smith said she will likely use 11.

“I have 16 girls playing and I’m going to give each of them an opportunity to play,” Smith said. “The biggest advantage of using 10 players is having the extra outfielder. There will be a lot of balls hit to the outfield more than they get in fast pitch. Communication is always very crucial but more so with four in the outfield.”

Other guidelines include pitchers must bat and a foul ball hit with two strikes, regardless of where it lands, is an out (three strikes). There is also no bunting or leads base runners can take off a base pad.

The number of games is also different. Calhoun is scheduled to play on five dates this month. All game days will feature doubleheaders.

“All of our Area games are double headers, so if a player doesn’t play in the first game, they will play in the second game,” Smith said. “No position is set. Most will have the opportunity to play different positions. I want them to be well-rounded players and do the best they can do at whatever position they are playing.”

Given a slightly different set of rules, Smith said her fast-pitch personnel were adjusting quite well.

“They were really concerned about hitting a slow pitched ball, but I told them if they hit a softball the way they’re hitting the baseball size whiffle ball with a broom stick, then we’ll have no problems,” Smith said. “I think it’s going to be fun to watch. There will be a lot of runs scored and the game will not take as long to play as a fast pitch game.”

Pitching-wise, the Lady Jackets turned to junior all-state pitcher Maggie McBrayer as the ace during the fast-pitch campaign. However, slow pitch will feature more of a mix as Smith said multiple girls will get the opportunity to pitch.

“Anyone who wants the opportunity to try pitching, then I will let them,” Smith said. “If they can’t pitch, we will call time and put in someone else. With all the rain, we haven’t been able to get onto the field yet. We’ve been practicing inside and going over slow pitch rules and playing a lot of whiffle ball. Their biggest adjustment is learning to be patient and waiting on the ball.”

Calhoun begins this new chapter is a newly-formed region. The region two consists of the Lady Jackets, Haralson County (current Class AAA), Osborne (Class 6A), McEachern and Kennesaw Mountain (7A).

Despite the Jackets facing schools from higher classifications, that doesn’t phase Smith one bit.

“This game is entirely different from fast pitch and you can’t judge a team on how they play the fast pitch game,” Smith said. “It doesn’t matter who we play or has it ever. We look at it from the standpoint, we’re not playing them, they have to play us! Yes, I’m very confident and I believe in our girls. Naturally, you must have talent to win but players must believe in themselves and their teammates and not be afraid of any challenge.”

In between 1999 and now, the Lady Jackets have brought home four titles, including a three peat from 2013-15.

Smith said she is hoping this is just the infancy of a revamped slow-pitch program.

“There are those who cannot play fast pitch but they can play slow pitch. I think there is a place for both,” Smith said. “Fast pitch and slow pitch are great team sports and I love both. I’m so thankful I have an administration who supports this sport, the girls and the coaches.”

Due to rain (will it ever go away), Calhoun was scheduled to open the season Thursday at Haralson County. However, inclement weather has postponed the contest to Tuesday, March 10. The Lady Jackets will have their home opener on Monday, March 9, versus McEachern. First pitch of game one is slated for 5:30 p.m. and game two follows at 7 p.m.