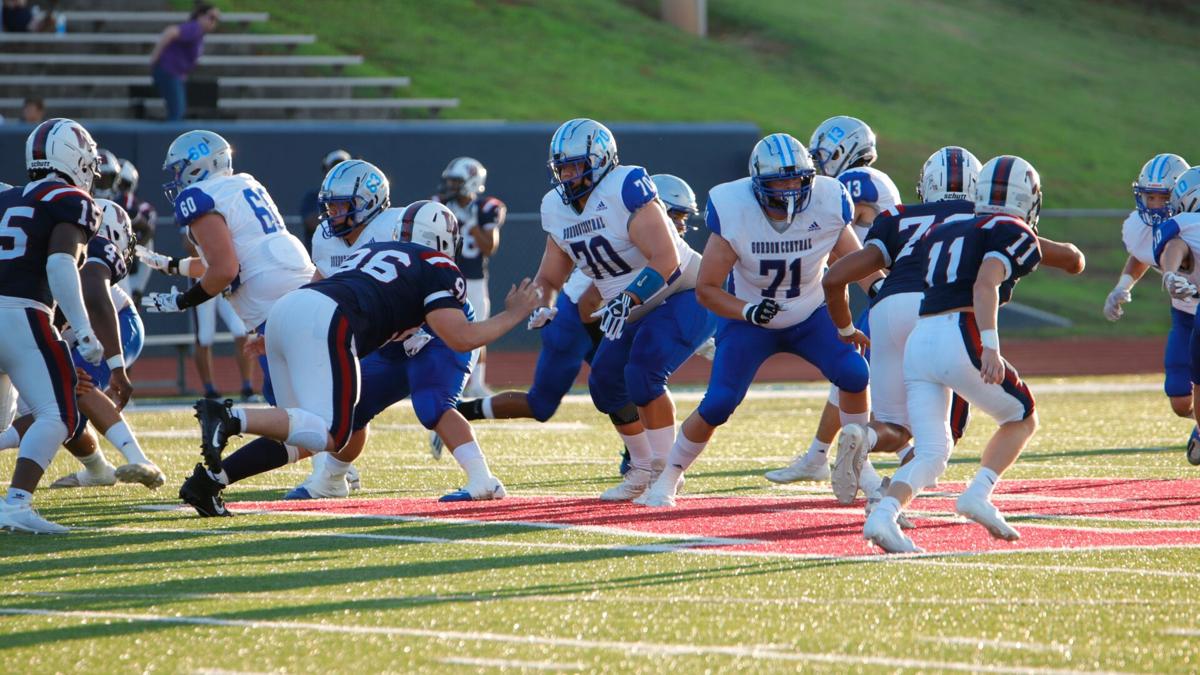 Gordon Central seniors Ethan Hendrix (70) and Zac Pardue (71) work to buy time for the Warriors offense to develop a play during a loss on the road at Woodland in Cartersville. 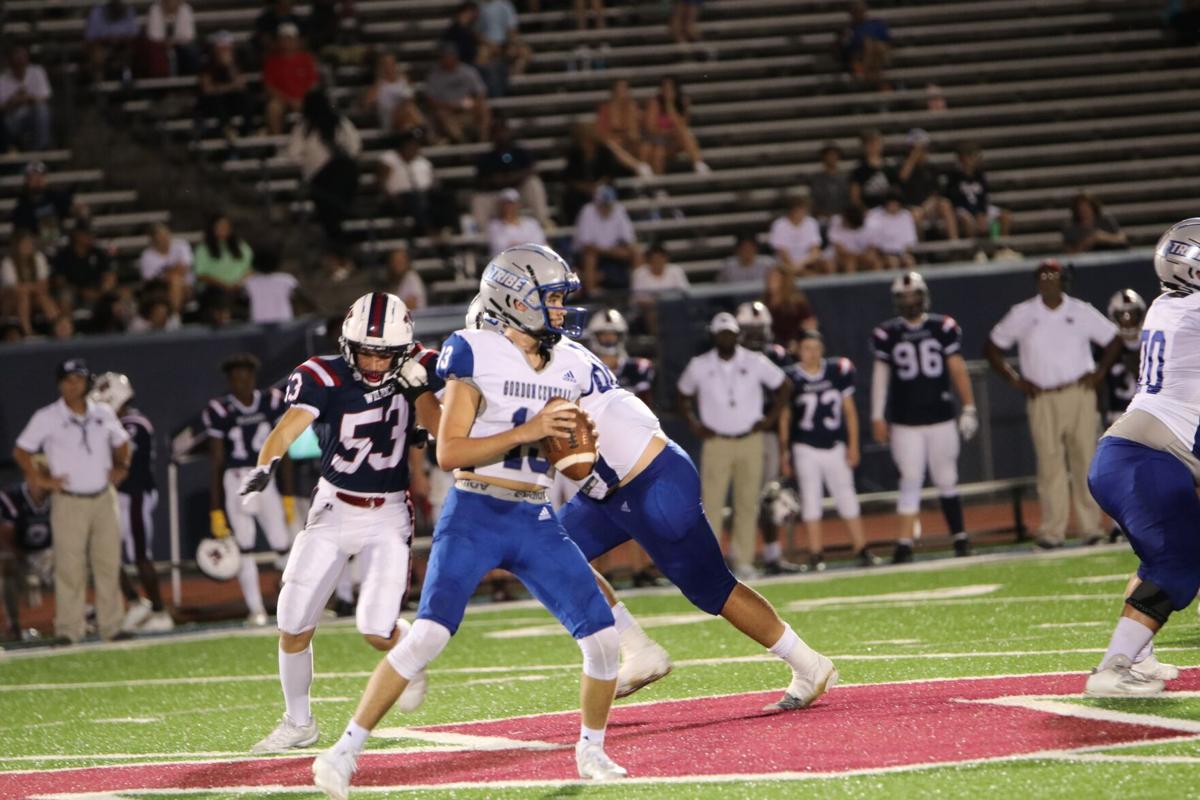 Gordon Central junior quarterback Peyton Wilson looks downfield for an open receiver during the Warriors’ season opener on the road at Woodland. 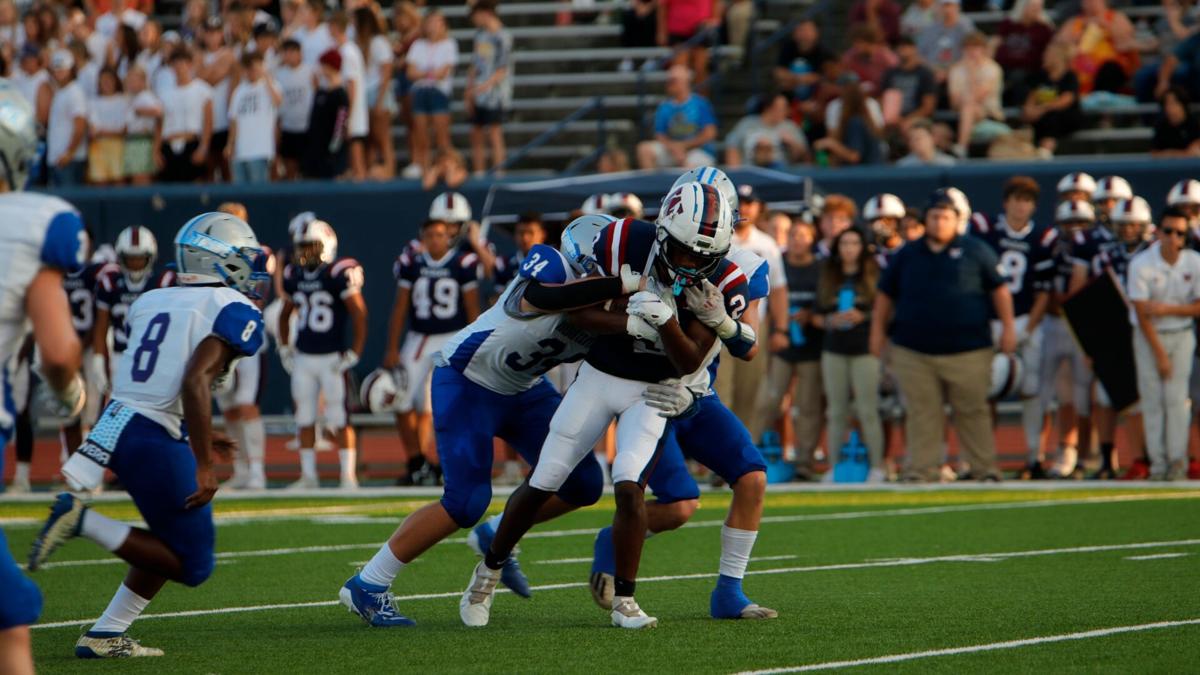 Warriors defenders swarm a Woodland runner during Gordon Central’s first game of the 2021 season on the road at Woodland in Cartersville.

Gordon Central seniors Ethan Hendrix (70) and Zac Pardue (71) work to buy time for the Warriors offense to develop a play during a loss on the road at Woodland in Cartersville.

Gordon Central junior quarterback Peyton Wilson looks downfield for an open receiver during the Warriors’ season opener on the road at Woodland.

Warriors defenders swarm a Woodland runner during Gordon Central’s first game of the 2021 season on the road at Woodland in Cartersville.

The traveling road show that is currently the Gordon Central High School football team continues Friday for the Warriors when they go to Northwest Whitfield County to take on the Bruins.

Head coach T.J. Hamilton’s team is in the second week of a schedule that has them opening with four away games as the Warriors’ regular season home opener is still almost a month from now.

The Tribe returns to Whitfield County next week but this time to face Southeast High School and then they have an open date.

That bye week, as they call it in the professional ranks, gives them two weeks to prepare for their 2-A Region 7 opener on Friday, Sept. 17th at Gordon Lee to complete their quartet of road games to kick things off.

They will actually begin their home schedule a week later on Friday, September 24th against Fannin County.

But that is still a ways away and this Friday night’s game with Northwest Whitfield matches up two teams in search of their first victory no matter where they have to go or not go.

The Warriors fell behind early in their season opener and lost to 5-A opponent Woodland, 43-9 while Northwest Whitfield found itself in a wild back and forth game with neighboring Coahulla Creek before faling 31-25 on a muddy field at Northwest Whitfield HS.

The Creek actually had a couple of more chances to score but lost a fumble inside the Bruins’ 5-yard-line and ran out of downs on another possession.

For the Warriors, they are hoping this is the week they really start to put things together as Region play is not far away. They still have a lot of young players at the skill positions on both sides of the ball and are working to become a solid offensive and defensive football team.

The 2-A Region they play in had mixed results last Friday night on the opening week of high school football in Georgia. The region went 3-4 overall with Dade County, Fannin County, and Pepperell all collecting victories while everyone else took it on the chin.

Dade County got its 2021 season going like everyone hopes their year will begin by returning the opening kickoff 90 yards down the right sideline for a touchdown to eventually spark a 21-12 victory over Gordon Lee, which Gordon Central will see in just over three weeks.

Fannin County got its offense cranked up to the tune of 434 yards and five touchdowns in a 34-7 conquest of Union County. The Rebels also showed they are going to be a force running and throwing the football as they earned 234 yards running and 200 more throwing in the victory.

Pepperell pitched the league’s only shutout in an 18-0 win over Heralson County. But while they had one of the Region’s best defensive efforts of the opening week, the Dragons seem to have one of the league’s biggest playmakers in running back DJ Rogers, who ran for an 81-yard touchdown in that game and also caught a 40-yard touchdown pass.

For the rest of the teams besides Gordon Central and Gordon Lee, Chattooga racked up 300 yards but lost, 33-14, to Adairsville and Model was shut 21-0 by Sonoraville.

The Phoenix racked up 398 yards in offense, including 232 passing. But Model did have a couple of interceptions and two fumble returns.

The Phoenix also had an excellent defensive effort, holding Model to under 50 yards in total offense, including 20 rushing.

Coosa High was the only team in the region that did not play last week as open the season Friday night at Trion.

The kickoff Friday night between Gordon Central and Northwest Whitfield HS is set for 7:30 p.m.

5 years given for possessing sexual images of minors