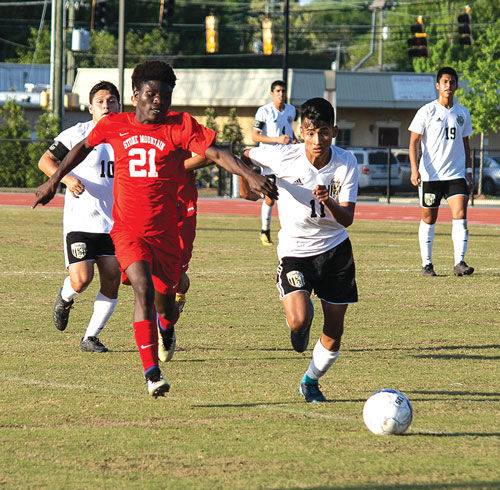 Calhoun’s Daniel Isep (right) outsprints a Stone Mountain player to the ball in the first half on Friday. (Tim Godbee, For the Calhoun Times) 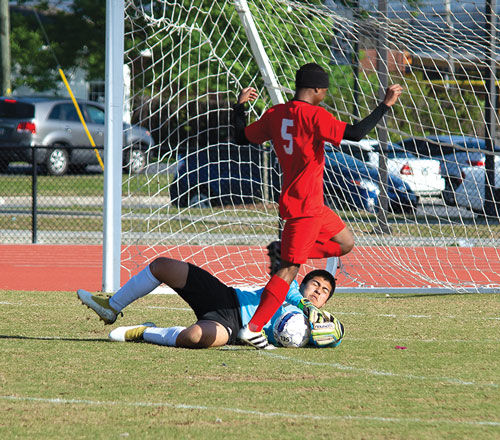 Calhoun goalkeeper Eduardo Fajardo (bottom) makes a save at the feet of a Stone Mountain player in the second half. (Tim Godbee, For the Calhoun Times)

Calhoun’s Daniel Isep (right) outsprints a Stone Mountain player to the ball in the first half on Friday. (Tim Godbee, For the Calhoun Times)

Calhoun goalkeeper Eduardo Fajardo (bottom) makes a save at the feet of a Stone Mountain player in the second half. (Tim Godbee, For the Calhoun Times)

The Calhoun Yellow Jackets were propelled by the goal-scoring prowess of Daniel Isep and a rugged defensive effort in a dramatic 3-2 postseason victory over the Stone Mountain Pirates to punch its ticket to the second round of the Class AAA State Tournament on Friday.

It was tumultuous start for the Jackets (11-5-1), who suffered from a lethargic start offensively and fell behind 2-0 in the first 21 minutes of the contest by allowing the Pirates (8-7-2) to capitalize off of two early breakaway opportunities.

“We knew this was going to be a tough matchup coming into the game,” Calhoun head coach Matt Rice said. “Stone Mountain plays in one of the toughest regions in the state, and they definitely showed how good they are this afternoon. They came out playing hard and fast, so we had to take a breath and start playing our brand of soccer.”

With their collective backs up against the wall, members of Calhoun’s offensive attack, midfield unit and defensive back line were all forced to ratchet up their intensity and resiliency, with each responding effectively over the course of the remaining 59 minutes.

“This game was going to come down to want to, and who wanted it more,” Rice said. “So we had to regroup and make some adjustments.”

On the offensive side of the field, the comeback effort started and ended with Isep and his hat trick of clutch goals.

The crafty forward’s first goal occurred with 17 minutes left in the first half when midfielder Gerardo Fraire lofted a pinpoint pass onto the foot of Isep, who swiftly tapped the ball past the goalie to put the Jackets on the board and crucially snag a bit of the momentum back from the Pirates before the halftime break. Fraire was credited with an assist on the play.

Calhoun kept the pressure on Stone Mountain to open the second half, with Isep emerging from a chaotic scramble for the ball near the top of the box and burying an equalizer into the bottom of the net in the 56th minute.

With only five minutes left in regulation, extra time seemed almost inevitable until Isep netted the game-winning goal after nabbing the ball from a Stone Mountain defender, knifing through the rest of the defense and launching it past the outstretched arms of the keeper to seal the win.

“(Isep) is a special player,” Rice said. “You get him the ball in a position to score, and he has a nose for the goal and just seems to make things happen. He also has 10 other players behind him creating those opportunities, so I’m extremely proud of all of them.”

To bolster Isep’s offensive outburst, Calhoun’s defense tightened up in the second half and kept Stone Mountain quiet and off-balance by intercepting passes and winning the majority of balls in the air.

When the Pirates did break through the back line, goal keeper Eduardo Fajardo was there to deflect most attempts. After those two early miscues, Fajardo preserved Calhoun’s rally by swatting away shots in key moments down the stretch. He finished with four saves in goal.

“As a sophomore that has already been a two-year starter for us, (Fajardo) always steps up,” Rice said. “Whether it is out here for us or with the football team during their state playoff run, he has so much postseason experience. And today is actually his birthday, so I know it was a special afternoon for him.”

Calhoun will try to keep their postseason run going when they travel to Morgan County for Round 2 of the Class AAA State Tournament on Wednesday at 6 p.m. The Jackets are trying to advance past the second round for the fourth straight season.

In other boys’ postseason soccer action:

Gordon Central’s defense held down a potent offense at Putnam County in the first round of the Class AA State Tournament on Friday, but the Warriors fell 4-2 in penalty kicks as their season came to an end.

After the two teams’ defenses turned away several scoring chances by both sides in regulation and overtime, the game went to a PK shootout to decide it. Gordon Central’s Wilson Falla and Alfredo Pegueros connected on their kicks, but Putnam County hit four of their’s to seal the victory.

“Our defense was the story tonight,” said Gordon Central coach Matt Wiley. “It was a fun game even though the result didn’t come out like we wanted it to. We had some good shots on goal and played well, but just couldn’t get that one goal in that we needed. That’s the way it goes sometimes. The guys were heartbroken afterwards, but I told them I was very proud of them. They left everything they had on the field and went right at it with one of the top teams in the state in AA."

The Latest: Flights from UK to Greece can resume July 15

Trump's leadership is tested in time of fear, pandemic