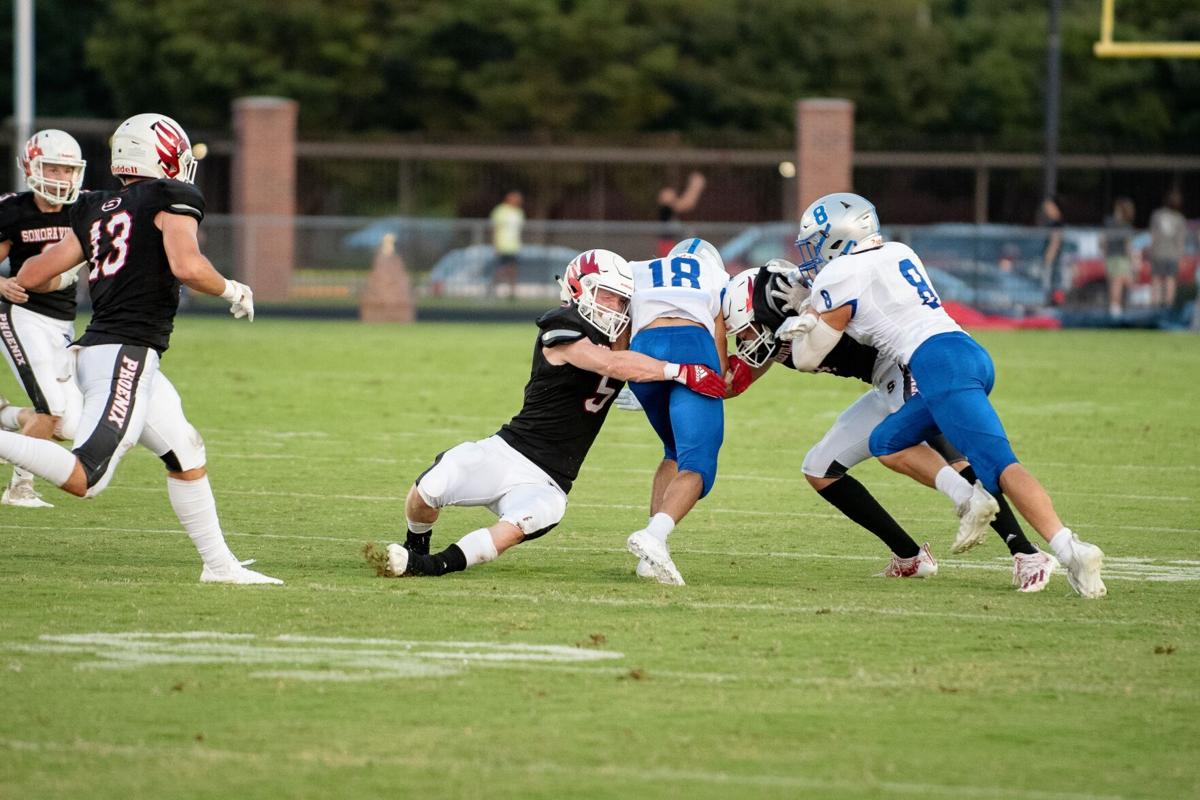 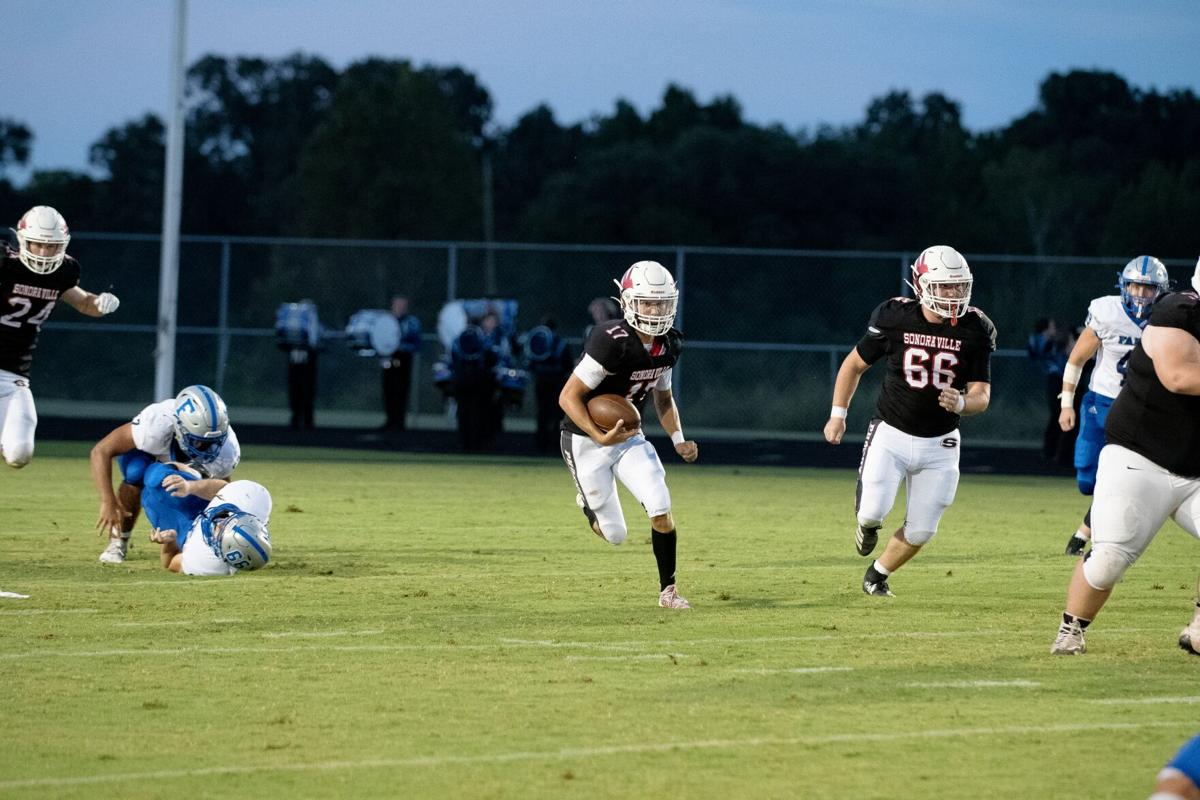 Quarterback Jaxon Pate runs for positive yards while Brenden Miller watches his left side during a shutout win over Fannin County. 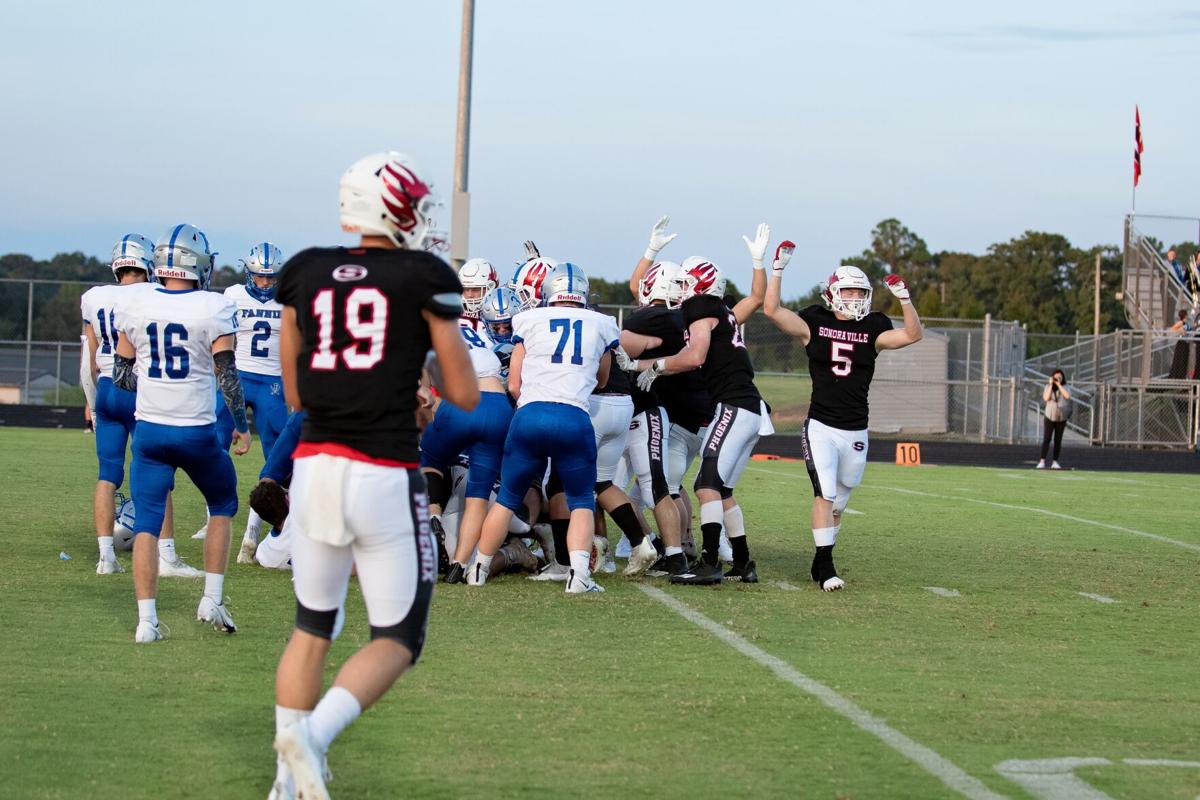 Sonoraville players celebrate a touchdown versus Fannin County in a 32-0 shutout victory for the Phoenix.

Quarterback Jaxon Pate runs for positive yards while Brenden Miller watches his left side during a shutout win over Fannin County.

Sonoraville players celebrate a touchdown versus Fannin County in a 32-0 shutout victory for the Phoenix.

Two games. Two wins ... and both were shutouts with no team having scored on them yet.

If the Phoenix keep that pace of play up the rest of the regular season, they’re not going to lose to anybody.

But while the thought of them playing 10 times and no one scoring on their defense is probably unrealistic, head coach Denver Pate and his staff are enjoying what they’re seeing as their rundown crew continues to come together early on.

“When you’re playing quality teams, you’re going to give up some yards, you might even give up a big play here and there, but if you can keep the team from crossing the goal line, you’ve done your job and so far our defense has definitely done their job.”

They improved to 2-0 on the year with a 32-0 romp over Fannin County last Friday night at The Furnace. They are off this week before they begin AAA Region 6 action next Friday night against Rockmart back at Sonoraville High School.

In their win Friday night over FC, the Phoenix led just 6-0 at halftime but scored four touchdowns and 26 points in the game’s final 16-and-a-half minutes to break it open.

“I did think we got better as the game went along,” Pate said. “Offensively, we were finally able to finish some drives. We had it going a couple of times in the first half but we stopped ourselves with mistakes but in that second half, even though it got a little sloppy real late there, we were able to finish drives.”

While they only scored once in the first half, it did seem like they were knocking on the visitors’ goal line a lot.

Taking the opening kickoff, the Phoenix moved the football right down the field and look like they were going to score but fumbled inside the Fannin County 5.

Establishing junior running back Zach Lyles as a workhorse early (he got the ball the first five times they snapped it), the Phoenix used nine plays to travel from their own 25 to the Rebel 5 before giving it up. A Jaxon Pate 25-yard pass to Nicholas Beddington and Lyles’ 27-yard tote the play before the fumble sparked the drive.

Taking over at their own 3 after the turnover, the Rebels were unable to pick up a first down and had to punt from their own end zone.

With a nice roll, the Phoenix took over at their own 48-yard line. Six plays later, after a terrific diving catch by senior Brant Bryant put them at the goal line, Pate called his own number for a 1-yard touchdown run and their first touchdown of the night.

After the teams exchanged punts, Fannin County responded with the longest drive the Sonoraville defense has surrendered this year.

Taking over at their 38 with under a minute remaining in the first period, it appeared the Rebels even scored to possibly take the lead but a penalty wiped out the touchdown and eventually the visitors missed a 31-yard field goal.

Using both the run and the pass, the Rebels broke loose for a 28-yard touchdown run on the eighth play of the possession to seemingly tie the game. But a holding call erased it and they were still at the Sonoraville 25.

The Rebels picked up another first down and even got close to the Sonoraville 10-yard line before they wound up being backed up and then missed a 31-yard field goal attempt.

The teams would close out the rest of the half by exchanging fumbles and trading punts.

We weren’t pleased with the way we played in that first half,” Denver Pate said. “I knew we needed to come out in that second half and play much better and fortunately we did.”

They began to put the game on ice with their first drive of the second half — an 11-play, 90-yard thing of beauty that took just over 5 minutes off the clock and gave them a little breathing room.

With Lyles, who unofficially finished the night with just over 120 yards and one rushing touchdown on 22 carries, taking it three times for 25 yards and Jaxon Pate finding Beddington for on a 13-yard pass, the Phoenix were facing a 4th-and-inches at their own 48.

The Phoenix dropped the snap from center but officials called Fannin County for a sideline infraction after a warning earlier in the game, resulting in a 5-yard penalty which was enough to give the home team the first down and keep things moving.

Pate then threw to tight end Jebb Knight for 13 yards and scrambled for gains of 14 and 15 yards respectively, putting them at the FC 8.

On the next snap, freshman running back Wyatt Springfield ran in from eight yards out and after another failed kick for the extra point, they were up 12–nothing.

From that point on, the Phoenix would score three more touchdowns, two of which came off turnovers.

First, Beddington intercepted a pass just past midfield and returned it inside the Fannin County 10, setting up Pate’s second scoring run of the game.

Their last touchdown came after Springfield picked off a throw near midfield and returned it tothe Fannin County 25. Overcoming two penalties, Pate threw his second touchdown pass of the night with a 15-yarder to sophomore wide receiver Hayden Ross.

In between, they scored their fourth touchdown on a drive that was both joyous and cringe worthy at the same time.

Joyous because they moved 74 yards for a touchdown, took almost seven minutes off the clock, converted a 4th-and-1 along the way, and completed the exhausting march with their first made point-after kick of the night.

It was also somewhat of a rough ride because they had four penalties including false starts on consecutive trips to the line of scrimmage.

But they kept plugging away, with a 23-yard pass to tight end Ridge Redd and a Fannin County pass interference call setting them up at the Rebel 30.

Five running plays later, including Pate plowing ahead for two yards on 4th down when they needed one, they were inside the Fannin County 15 and Pate delivered a nifty little shovel pass about 3 yards in front of himself to Lyles, who caught it and covered that distance for the score.

The head coach said it feels great to be 2-0.

“We feel good about where we are right now,” coach Pate said. “We played two games and have not given up a point yet. That feels good. We’ve been moving the ball and really only stopped ourselves to this point,. That means we’ve got to work on getting some things cleaned up and stop being our own worst enemy, but we feel good that we have been able to move the ball. We just feel good overall really about the direction that we are going in.