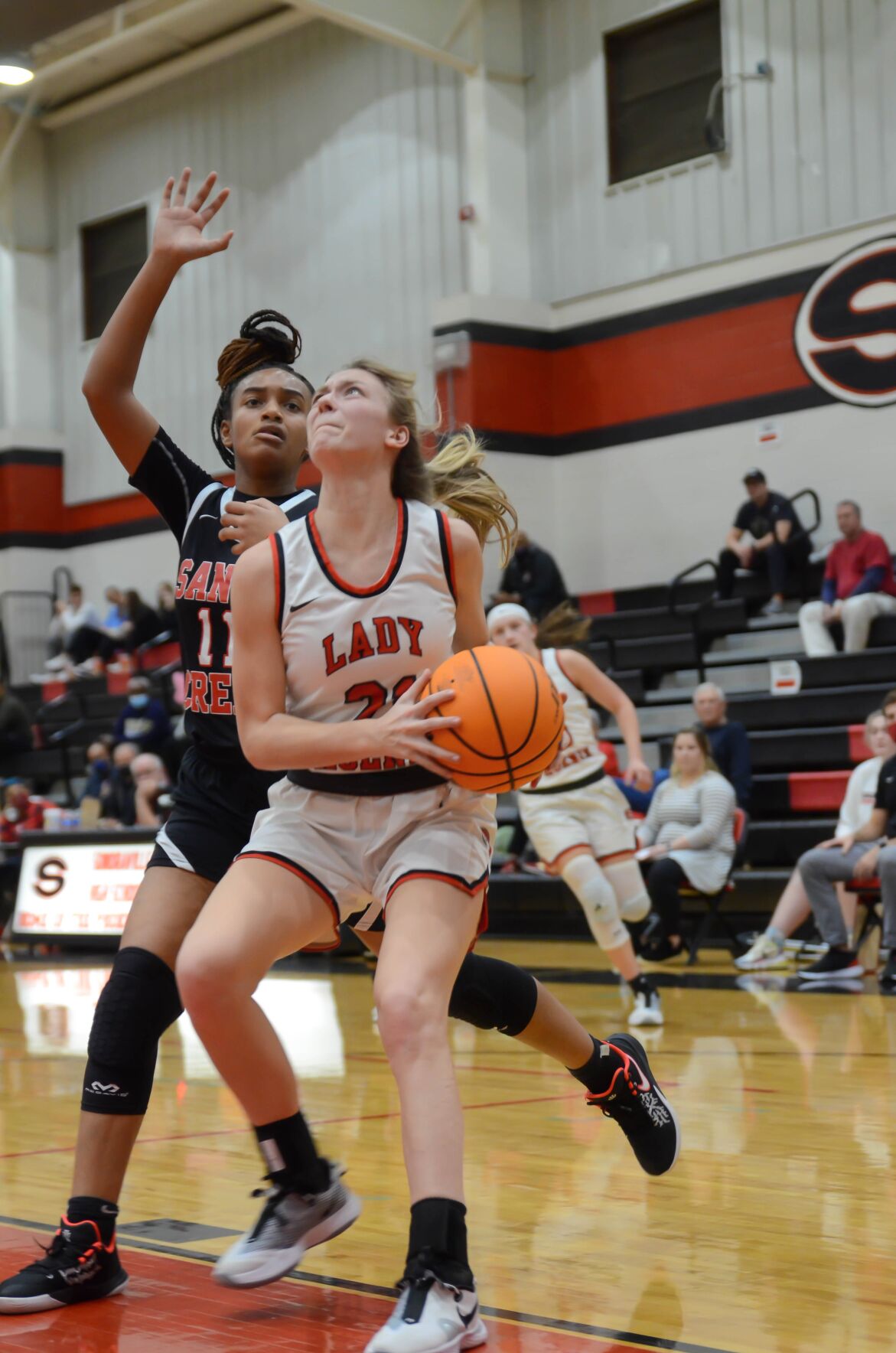 Abby Chambers drives in against a Sandy Creek defender for the bucket and foul in another playoff win for Sonoraville. 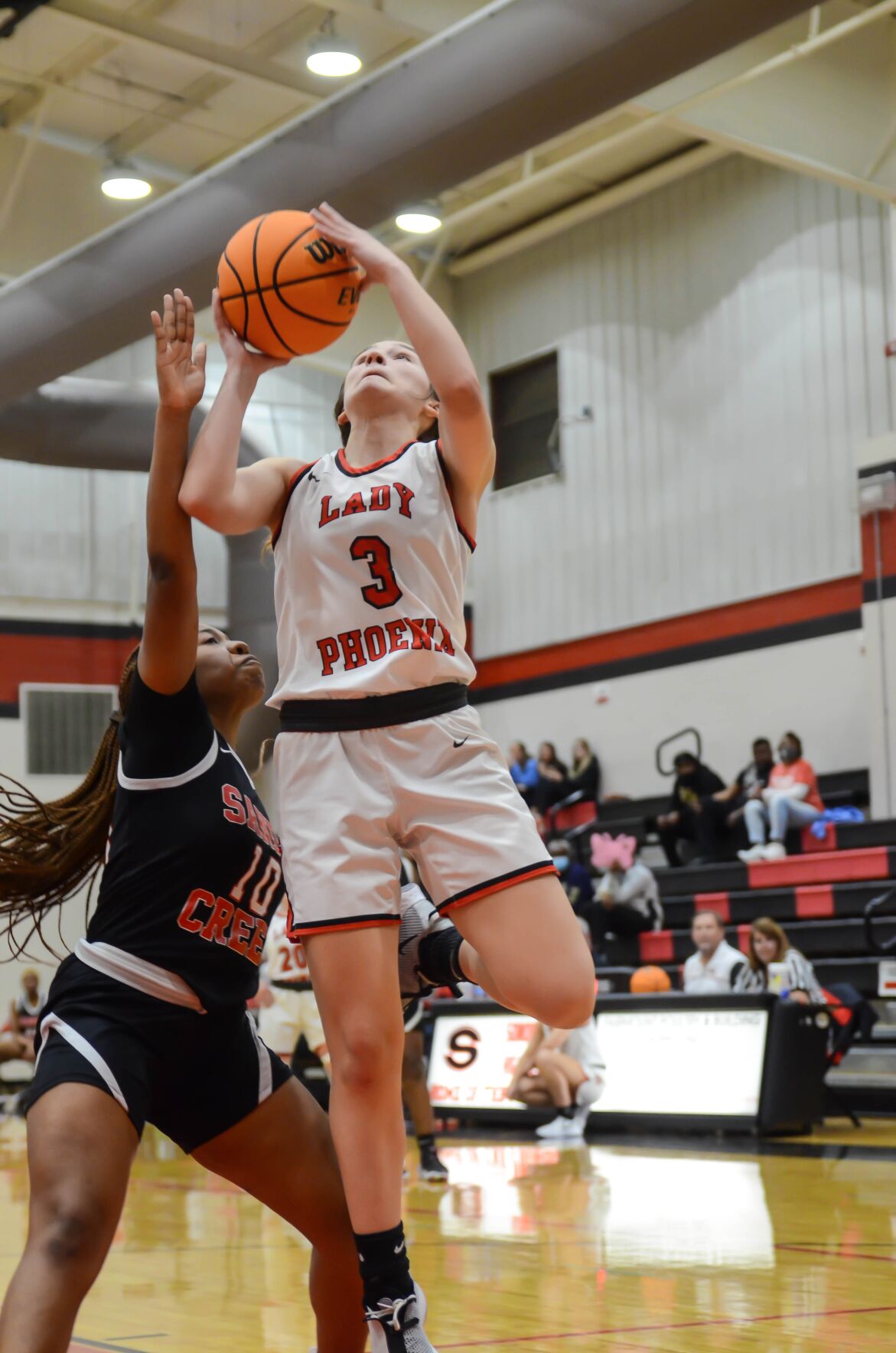 Matti Parker drives the lane for a two point play as Sonoraville moves on in the state tournament with a huge 67-48 win. 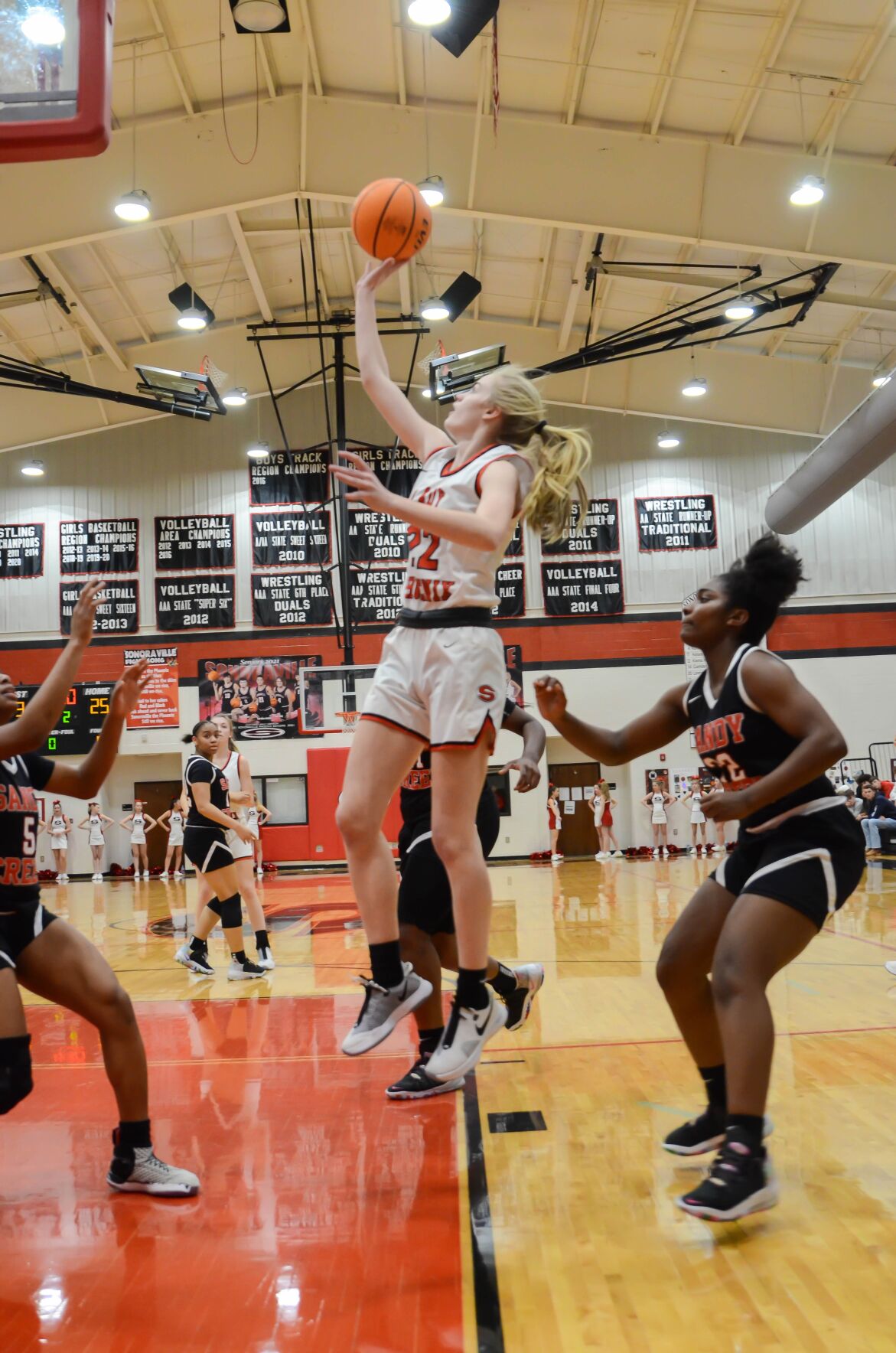 Kayleigh Kelley goes up for a basket as Sonoraville wins at home to advance in the playoffs 67-48. 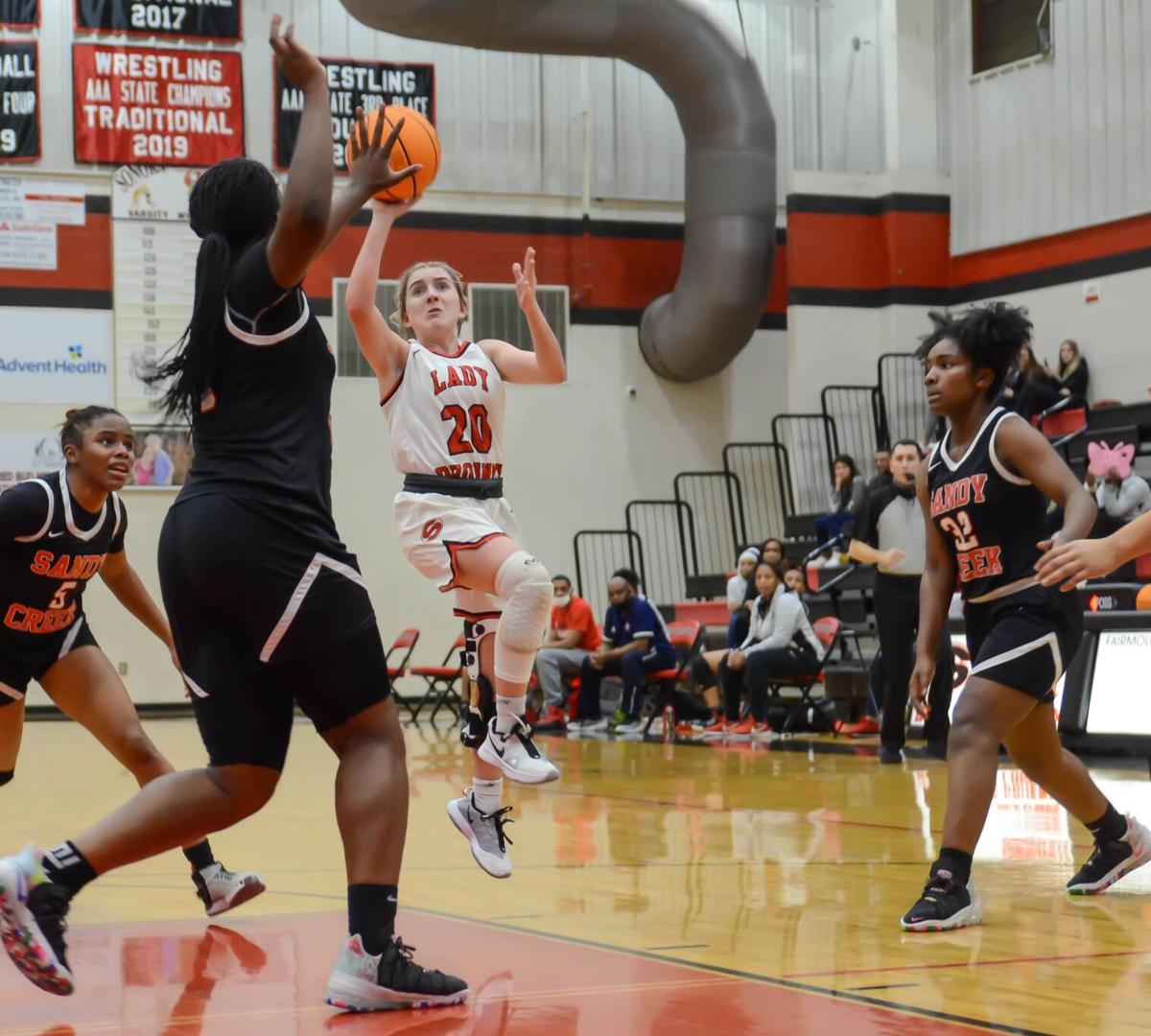 Lindsay Bowman goes up over Sandy Creek defenders for a shot as the Lady Phoenix took the lead early and never let go as they advanced into another round of the state playoffs. 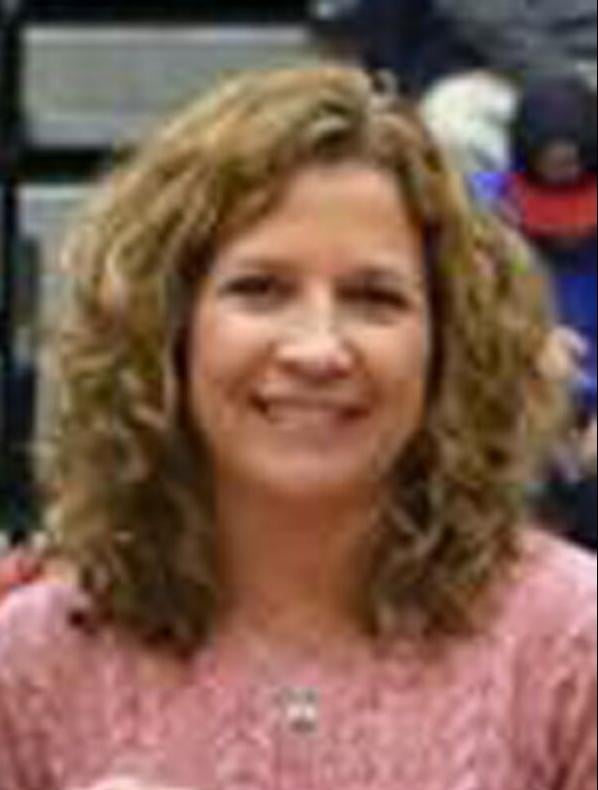 Abby Chambers drives in against a Sandy Creek defender for the bucket and foul in another playoff win for Sonoraville.

Matti Parker drives the lane for a two point play as Sonoraville moves on in the state tournament with a huge 67-48 win.

Kayleigh Kelley goes up for a basket as Sonoraville wins at home to advance in the playoffs 67-48.

Lindsay Bowman goes up over Sandy Creek defenders for a shot as the Lady Phoenix took the lead early and never let go as they advanced into another round of the state playoffs.

In their first-round win on Tuesday, it took a little while for Sonoraville to get going as they gained steam as the game went on and eventually pulled away in the final quarters. On Friday, there was no waiting around or struggling in the early minutes.

The Lady Phoenix got off to a big start in front of their home crowd at The Furnace, leading by nine at the end of the first quarter and by 20 at the half, before coasting to a 67-48 victory over Sandy Creek in the second round of the Class AAA State Tournament to secure the program’s third straight Elite Eight berth.

Sonoraville (23-4) quickly took control in the first quarter, scoring the game’s first seven points before settling into a 12-3 lead at the end of the period. The game’s defining stretch happened to start the second quarter as the Lady Phoenix reeled off a 15-0 run to give themselves a 27-3 lead, and it was never close again for the rest of the contest.

“If you come out and take control early, it allows you to rest some people here and there and keep everyone fresh,” said Sonoraville head coach Stephanie Caudell. “For Sandy Creek to come into an opponent’s gym after a long bus ride and get behind by that much early in the game, it made it really hard for them to get into the game. We knew even with the lead (Sandy Creek) would pick it up eventually so that start to build a good cushion on the scoreboard was huge.”

Sonoraville eventually took a 31-11 advantage into the locker room at the half. Sandy Creek (17-13) showed some signs of life in the third quarter trading buckets with the host Lady Phoenix, but the closest they got in the period was 18 points.

Leading 56-30 after three quarters, the Lady Phoenix continued the same strong play in the fourth as Sandy Creek was never able to put together a big enough run to truly get back in the game. They cut Sonoraville’s lead to 17 multiple times but could not get any closer.

“They amped up the pressure a little bit in the second half, but that’s what we expected with them being down,” said Caudell. “We went through a little stretch where we had some turnovers and took some quick shots, and that allowed them to get some better looks at the basket. I also think we didn’t rebound the ball in the second half as we did early in the game, but 21 (Arielle Belinga) had a lot to do with that. She’s a good player.

“We handled things well overall and were able to get a lot of people in to get good minutes. For the most part, I think everything that went into the game contributed good minutes. I was proud of them.”

Sonoraville’s Alexa Geary played a big role in the huge start for her team as she scored 16 of her game-high 26 points in the first half, including knocking down four 3s. The senior finished the game with five 3s total.

“When (Alexa) lets the game come to her and plays free, she’s very tough to deal with for opponents,” said Caudell. “She was making 3s, hitting some floaters, mid-range and getting to the basket. She’s also an excellent passer. She really is the total package.”

“It really gets us going when shots are going in early in the game,” added Geary of her hot start. “We went into tonight’s game with the attitude that we had nothing to lose and didn’t put any pressure on ourselves. We came out and gave it everything we had.”

Belinga was the top scorer for Sandy Creek with 21 points as she had 15 of those in the second half. Persia Sanders added nine points, and Jania Hodges and Leslie Green each contributed eight.

The Lady Phoenix now move into the Elite Eight for the third straight season and will host the winner of the Cross Creek and Americus-Sumter second-round matchup with a date and time to be announced later.

“Being in the Elite Eight means you are an elite team,” said Caudell. “But the thing is everyone else that’s left is too. It only gets harder as the tournament moves forward. We know we’ve got to have elite preparation, elite practice and do everything we can do to be ready. We know it’s going to be a tough one no matter who it is.”

“We’re grateful to be there, but we deserve to be there,” added Geary of her team’s Elite Eight berth. “We’re going to push even harder and work harder now to get past the Elite Eight. We know we’re going to be on our home court again so that should give us more energy and excitement. Our only goal now is to win the next one.”