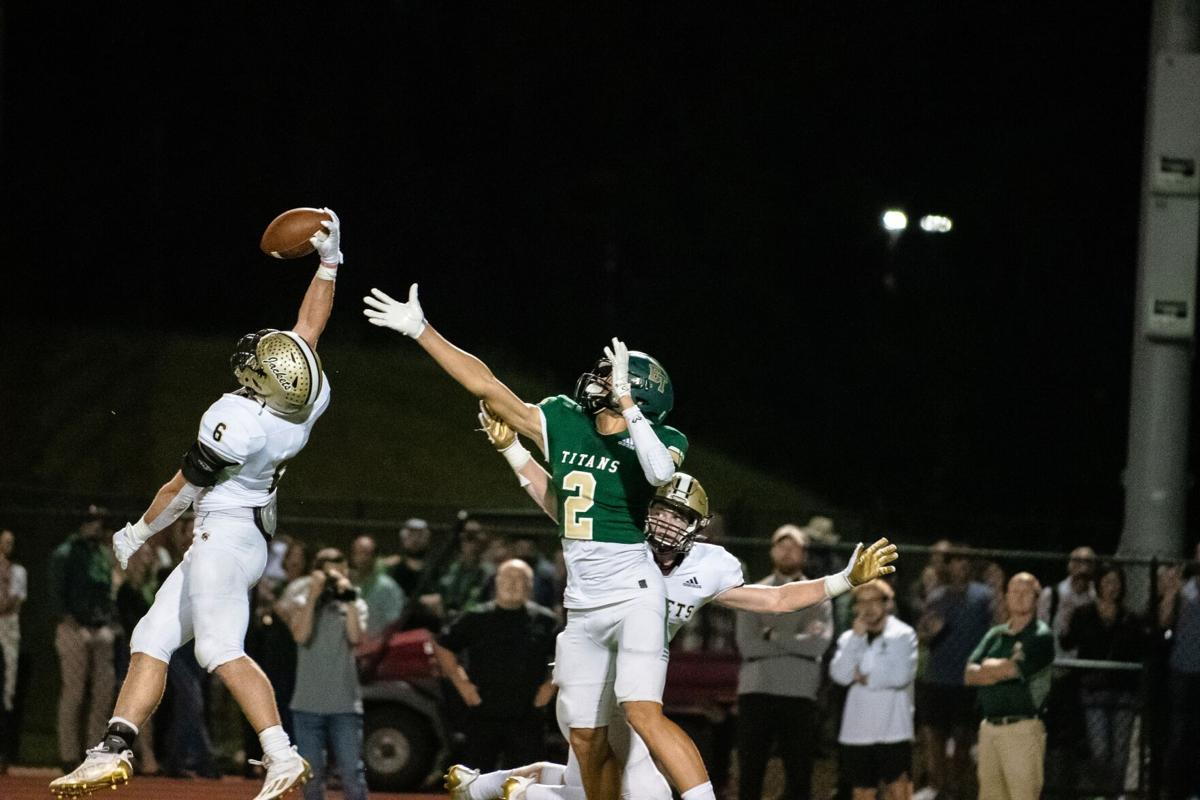 Calhoun’s Gage Leonard makes a one-handed interception in a 32-27 win over Blessed Trinity. 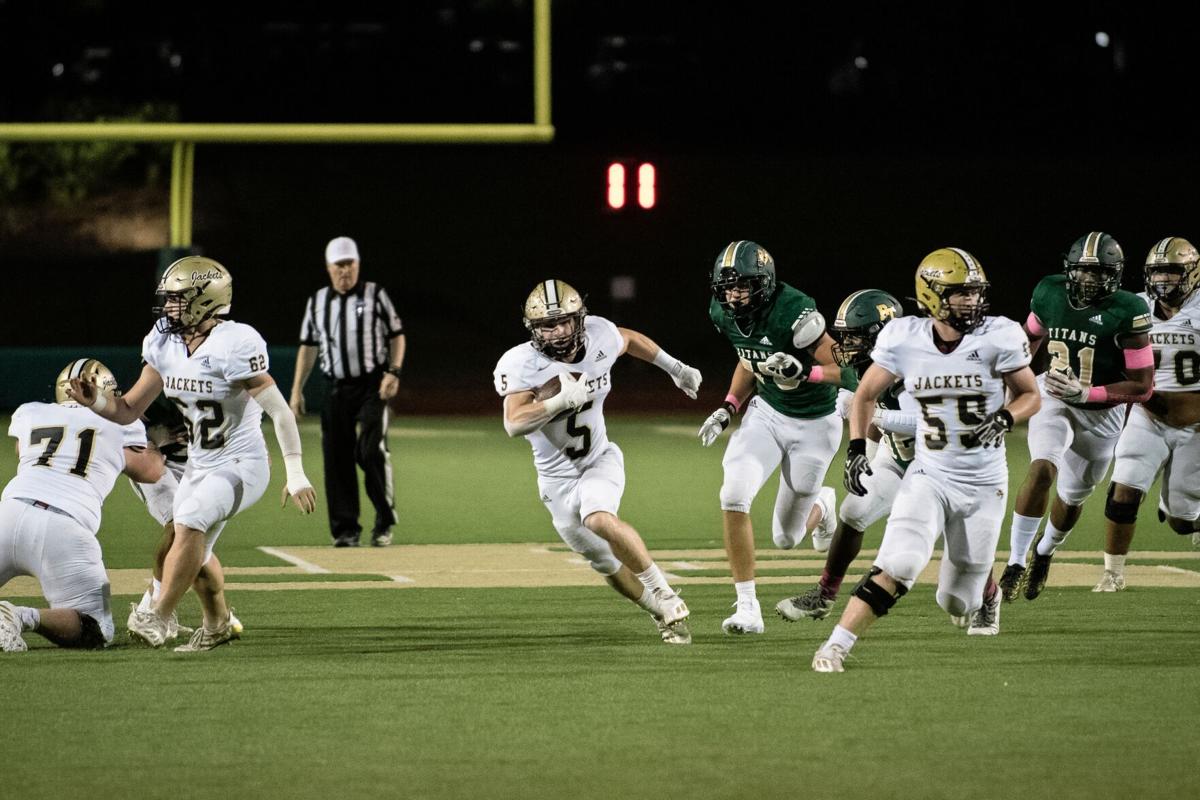 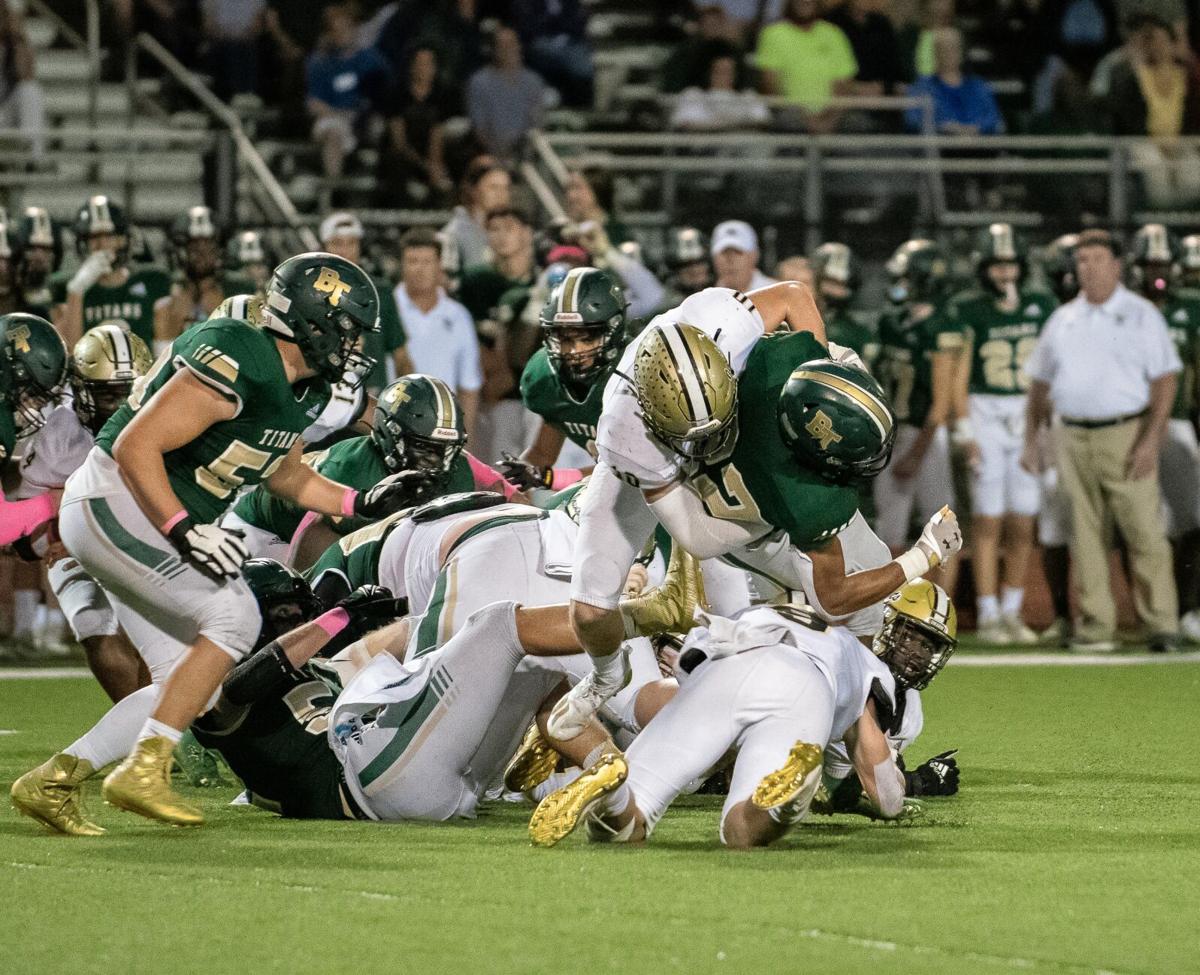 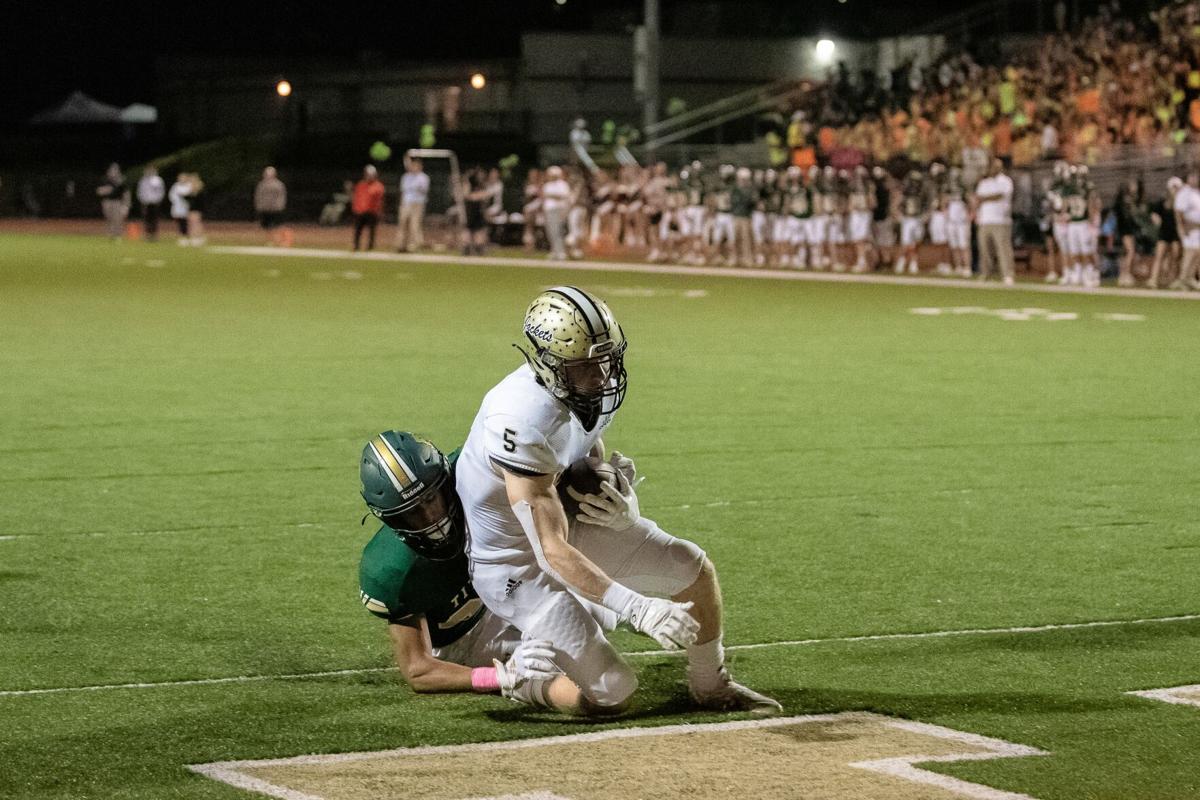 Calhoun’s Gage Leonard makes a one-handed interception in a 32-27 win over Blessed Trinity.

The Yellow Jackets are off to a 2-0 start in 5A region 7 action following a 32-27 thriller over Blessed Trinity last Friday night near Atlanta.

It was a game in which the Jackets never trailed the Titans and put one of their region’s biggest rivals a game behind them in the standings.

“It was a good win for us,” Calhoun head football coach Clay Stephenson said. “I thought it was a total team effort. We told the kids going in that it would be a full 48-minute football game, which it was. We were really proud of the way the kids responded down the stretch when things got tight there and I think it shows the maturity and the resiliency that our guys have right now. Blessed Trinity is a great football team and they had a chance to take the lead at the end, but our defense did its job and it was a big win for us.

“I thought we won all three phases of the football game. We didn’t turn the ball over and had just three penalties and while that’s not totally mistake-free, which is what you’re always looking for, we didn’t hurt ourselves and that was good to see. So we were pleased that we were able to get the win and now we hope to build on that and have another good week of preparation this week and play another good football game this Friday night.”

He said those types of finishes, where someone has to score or someone needs to get a stop, could be the norm going forward and it’s good to have the experience of playing through that situation.

“That’s one thing we have talked about and that is the challenge of finishing those types of games, “ Stephenson said. “You get into the playoffs and you’re facing a great team every week, you’re going to have games come down to the wire like that and so for our kids to show that they can make the plays is a positive sign. I know the players and the coaches were very excited about the way we were able to stop them at the end when we had to. And it shows the kids that it’s just a matter of going out, when it’s close like that, and finishing the game, which is something we’ve been talking about all year.”

“He’s a great player and we’ve faced some very good (running) backs this year but he’s the best. He didn’t need much room to make a couple of big plays and when you watch him he didn’t seem that fast but he can really run. So with a running back like that, they’re a team that always has a chance to make a big play when they have the ball and they made a few big runs against us but fortunately, we were able to match them offensively and then get the big stop at the end that really made the difference.”

While the defense did what it had to at the end, they also had a couple of key interceptions. Senior Quin Smith’s theft in the final seconds followed a highlight-reel type leaping, one-handed takeaway by Gage Leonard in the second quarter to thwart another BT threat.

Offensively, the Jackets displayed balance in accumulating just under 300 yards total offense against the Titans. Leonard led the ground game with two touchdowns rushing and Smith and Cole Speer each caught touchdown passes from senior quarterback Christian Lewis. Lewis ended with 193 yards passing on the night.

Stephenson said it feels great to be 2-0 in the Region, but the present goal is to be 3-0 after they play Woodland Friday night.

“It is nice to get off to a good start in region because these are the games that really count. These are the games you work year-round to get ready for, so we feel good about winning our first two games,” he said. “But we can’t get ahead of ourselves and we can’t look beyond today’s practice and this Friday’s game because that’s all that matters right now. We’ve got a good opponent coming in here Friday night and we’ve got to be ready to play and I believe our kids will be.”

The Yellow Jackets will go for their third straight League victory and sixth straight win overall Friday night against Woodland, which comes in with an 0-2 mark in the Region.

The Wildcats kicked off region action two weeks ago with a 40-3 loss to Blessed Trinity and fell last Friday to Cass, 35-0.

Stephenson said not to look at their record or any recent results because he believes the Wildcats are very capable.

“I have a ton of respect for Coach (Tony) Pont and the job he does,” Stephenson said. “They’re in a bit of a transition phase this year having changed offenses. They’ve been running the power T and this year they’ve gone more to the spread and so sometimes when you make a change like that, it can take time to make that adjustment. But coach Pont does a great job of always having his kids prepared and ready to go, so we’ve got to be able to match that Friday night.”

A victory would also seem to clinch a playoff berth for Calhoun when the postseason begins next month.

The Jackets and Cartersville, who are to meet in two weeks in Calhoun’s regular-season finale, both currently lead\ the league with 2-0 records while Blessed Trinity and Cass are each 1-1. Woodland and Hiram are each 0-2, meaning Calhoun could eliminate Woodland Friday night with a victory.

There is another big showdown in the league this week with Cartersville making the trip to Blessed Trinity and if the Titans can take down the Purple Hurricanes, the Swarm could be alone in first place in the region come Saturday morning.

But on top of all that, if the Cass Colonels can knock off Hiram Friday and stretch their Region win streak to two games, it would be the Hornets third league loss meaning Calhoun, Cartersville, Blessed Trinity, and Cass would be the Region’s playoff representatives with two weeks still left in the regular season.

“I really hadn’t thought that far ahead as far as winning this game and what it would mean regarding clinching a playoff berth,” Stephenson said. “Our main goal is just going out Friday night and taking care of business. We’re playing a good team with a fine coach so we need to come out and play our best football and that’s what we’re focused on.”

The Yellow Jackets are now 6-1 overall.