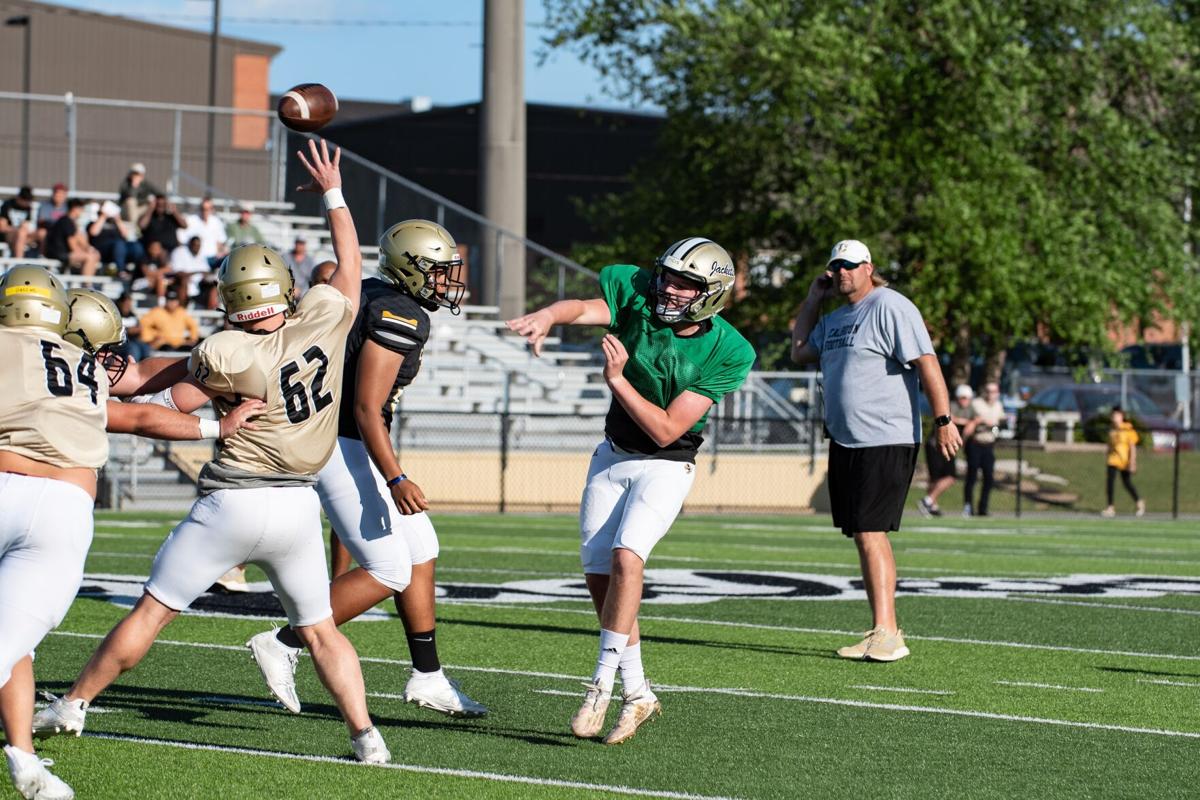 Trey Townsend attempts a pass for the Black team Friday night as the Yellow Jackets wrap up spring practice with their Black and Gold Spring Game. 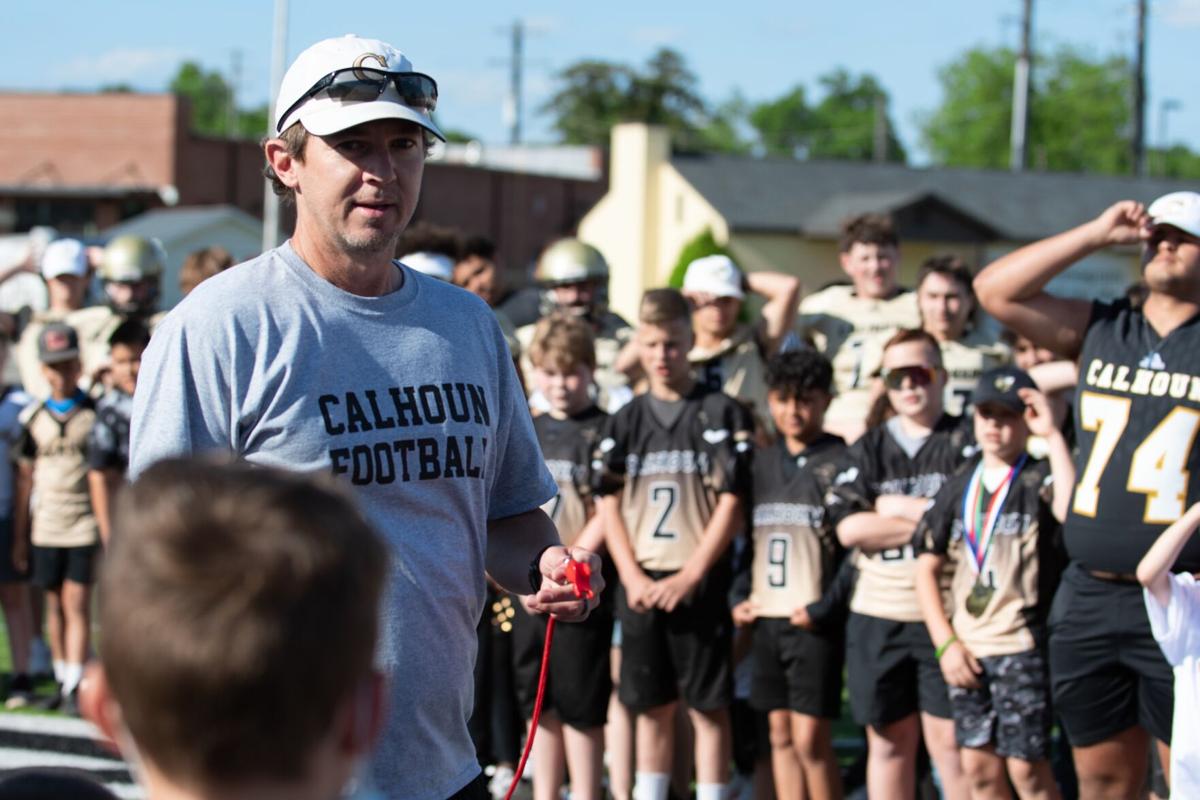 Calhoun Head Coach Clay Stephenson addresses current and future Yellow Jackets before the annual Black and Gold Spring Game with team Black taking the victory. Calhoun opened Fall practice in late July and will start the regular season on Aug. 20 when they host rival Dalton at 7:30 p.m. at The Reeve. 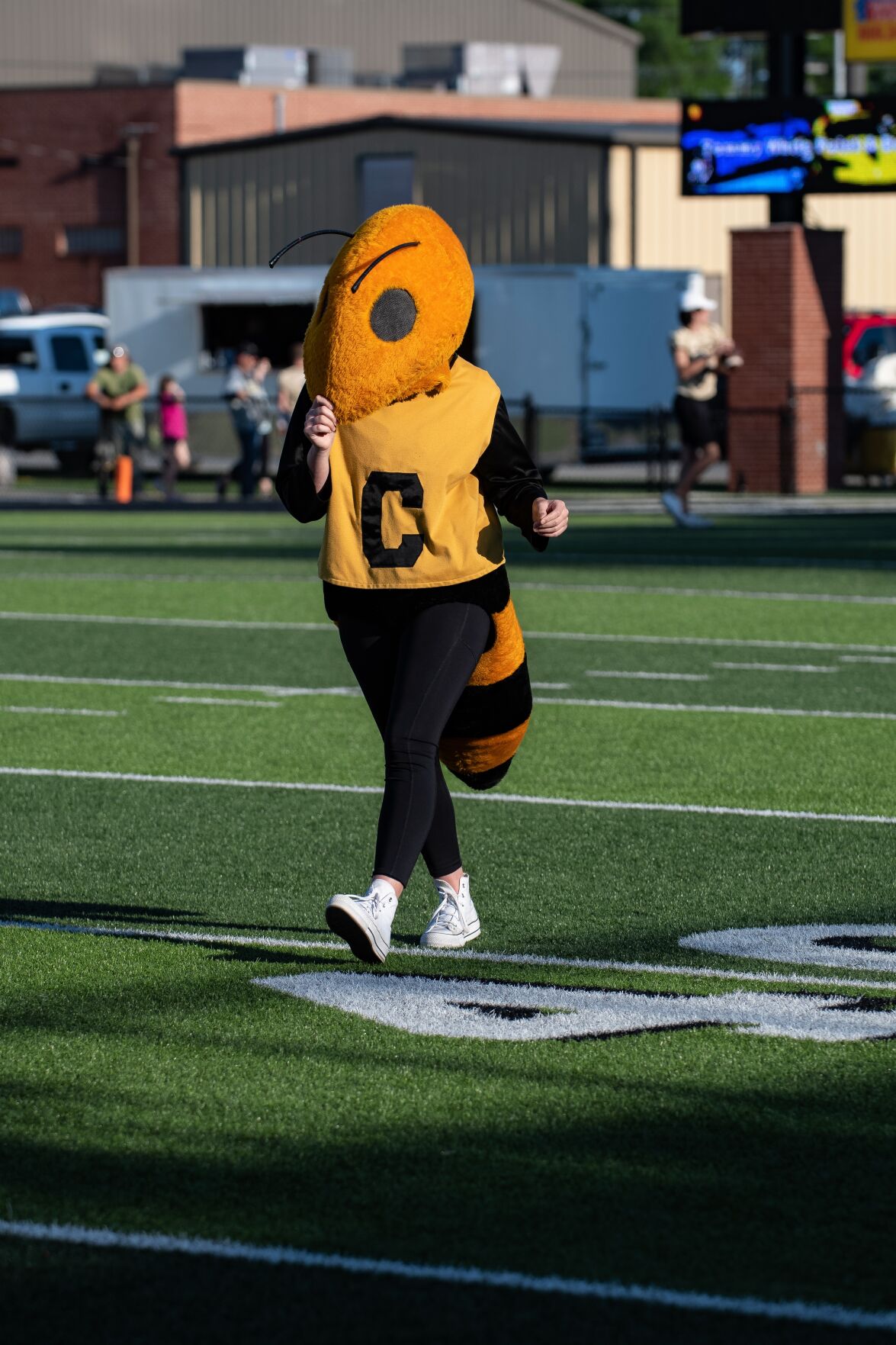 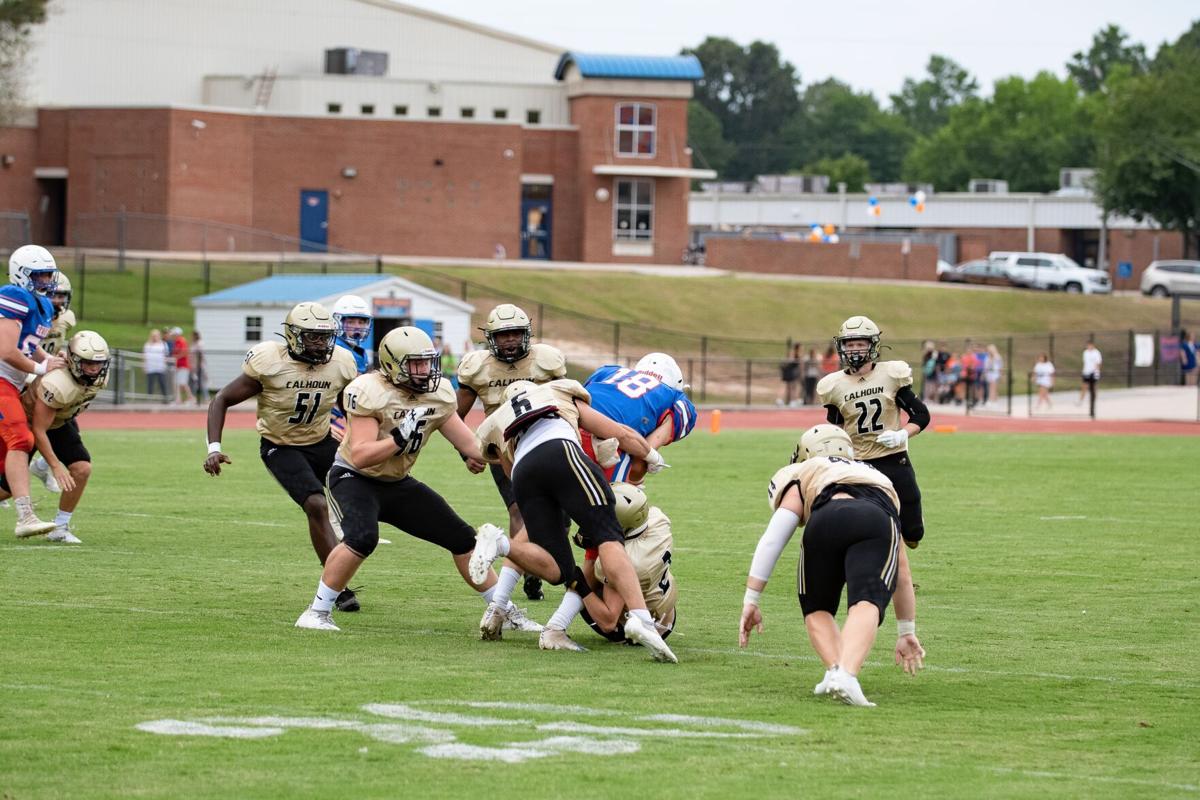 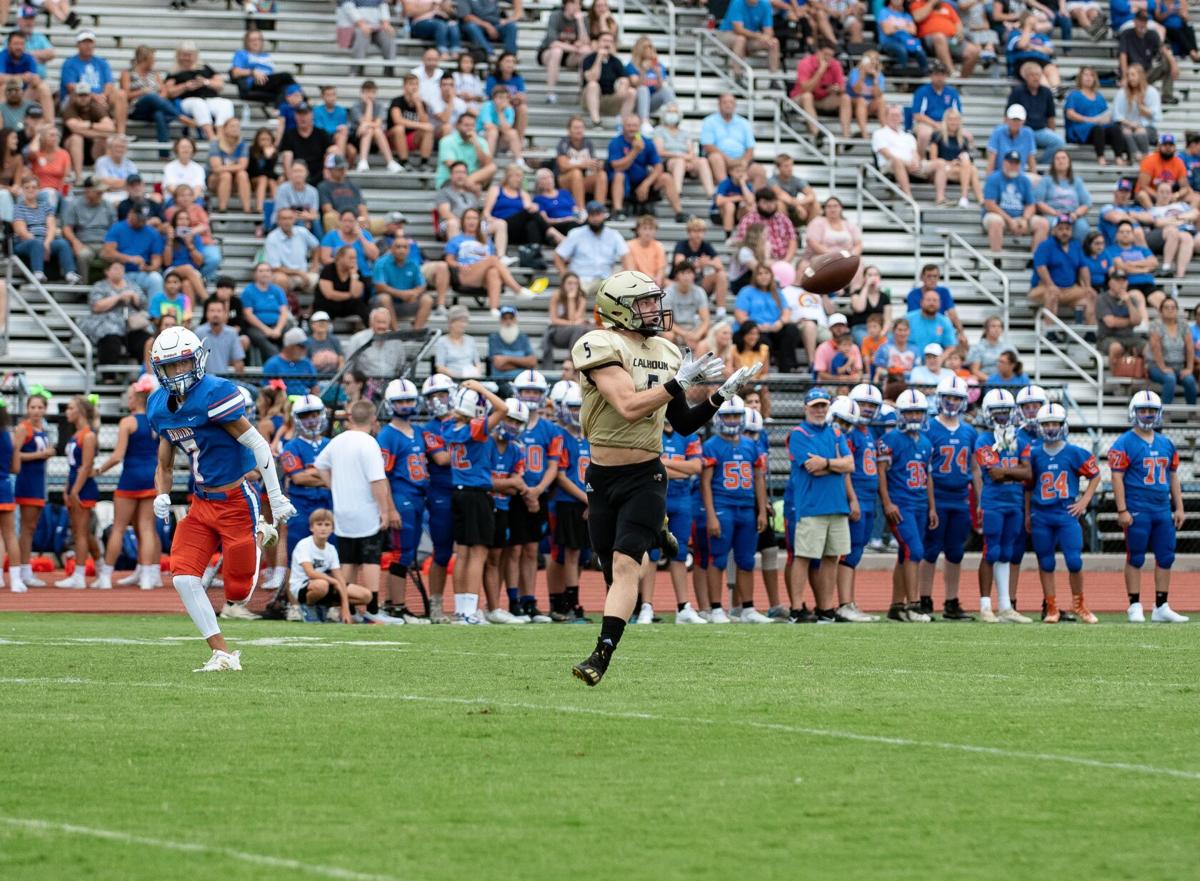 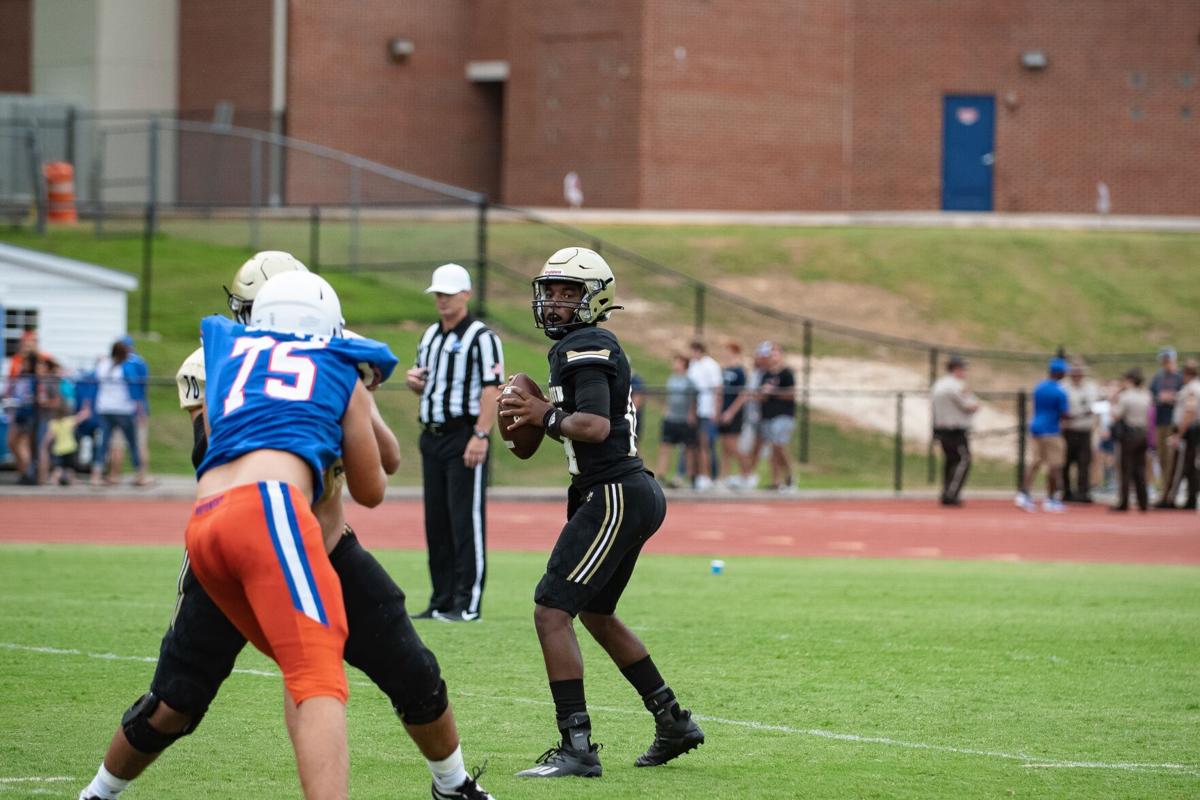 Calhoun senior quarterback Christian Lewis stands tall in the pocket looking for a receiver during the Jackets’ scrimmage victory at Northwest Whitfield County. 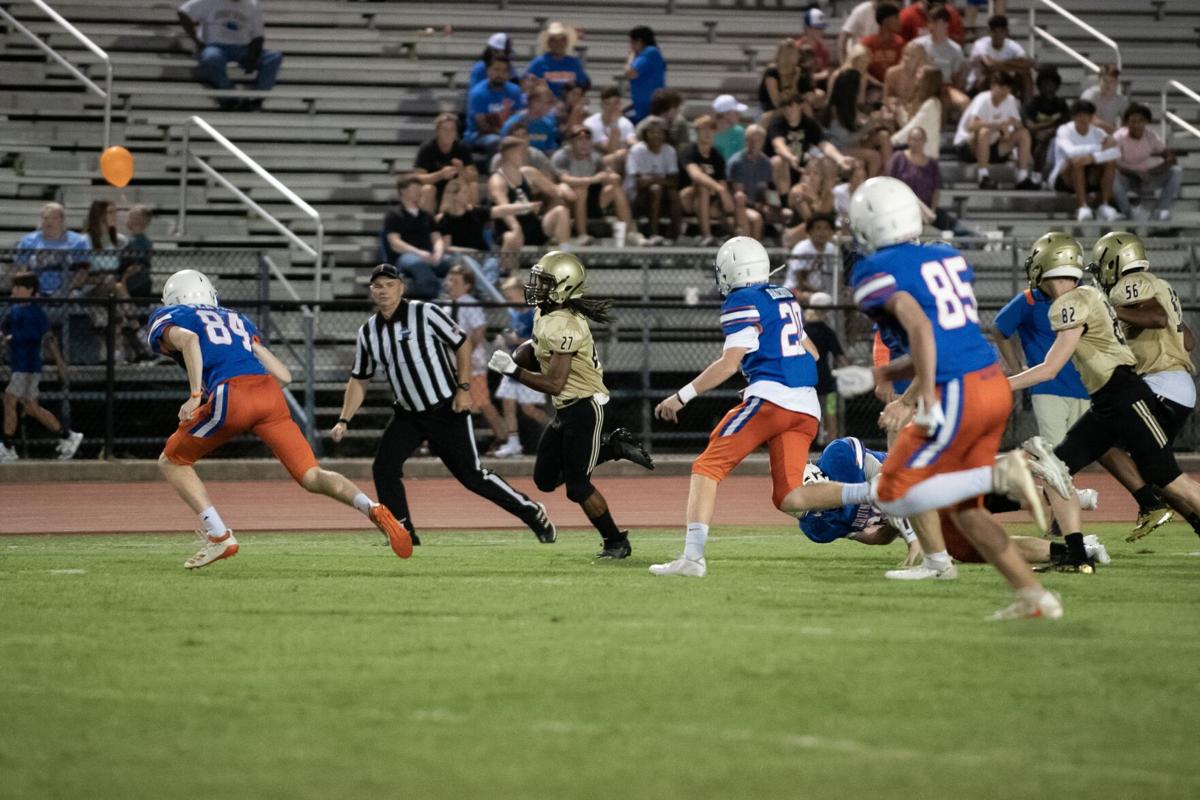 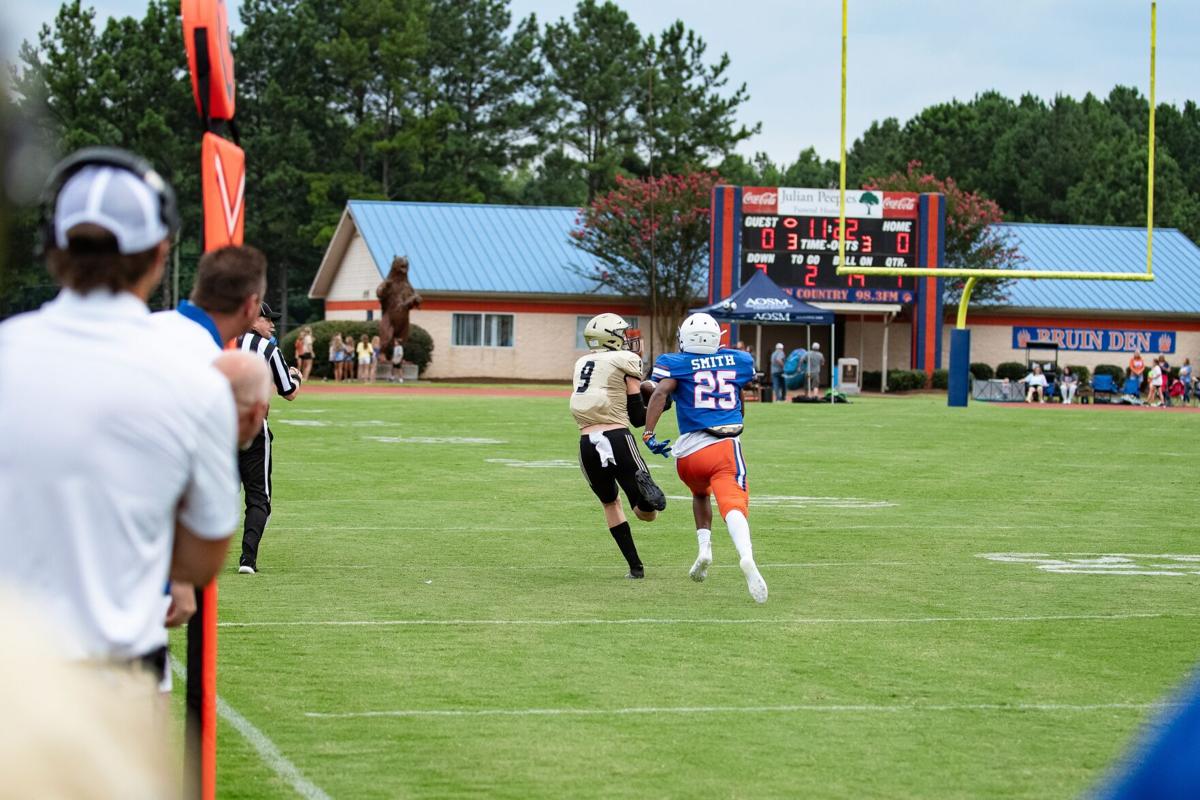 Calhoun senior Quin Smith beats out a Bruins defender for a long touchdown connection during the Jackets’ 41-13 victory to open the preseason.

Trey Townsend attempts a pass for the Black team Friday night as the Yellow Jackets wrap up spring practice with their Black and Gold Spring Game.

Calhoun Head Coach Clay Stephenson addresses current and future Yellow Jackets before the annual Black and Gold Spring Game with team Black taking the victory. Calhoun opened Fall practice in late July and will start the regular season on Aug. 20 when they host rival Dalton at 7:30 p.m. at The Reeve.

Calhoun senior quarterback Christian Lewis stands tall in the pocket looking for a receiver during the Jackets’ scrimmage victory at Northwest Whitfield County.

Calhoun senior Quin Smith beats out a Bruins defender for a long touchdown connection during the Jackets’ 41-13 victory to open the preseason.

When it was announced that Calhoun would be moving to Class AAAAA due to the last GHSA Reclassification cycle, there were many on the outside looking in that doubted the Jackets could continue to compete at the high level they were used to over the last two decades in Class A, AA and AAA.

Apparently all that doubt turned out to mean a whole lot of nothing.

Calhoun performed well in its first year competing in their new classification in 2020, finishing 9-4 overall and making a trip to the Class AAAAA Elite Eight. Those marks are pretty solid on their own, but add in the fact that the Jackets were right there with their opponents in all four losses, including leading Coffee in the fourth quarter of their state quarterfinal matchup, and it makes their inaugural 5-A season even more impressive.

But even with that success, the Jackets were not satisfied and return a talented and experienced roster in 2021 that is hungry for even more according to head coach Clay Stephenson.

“Last year (in Class AAAAA) was good to build some confidence and show that we could compete,” said Stephenson, who enters his third year at the helm for the Jackets. “But even with all that we accomplished, it’s never really good enough when you look back. We were in every game that we lost. Hopefully the experience gained in those games will help us and show us how to be able to pull those games out so we can go further in the postseason.

“’Finish’ is a big thing for us as we go into the 2021 season. We’ve got to finish quarters, finish halves and finish games. We weren’t able to do that in those losses last year so we’ve got to learn from that and change that to get to where we want to go this year.”

“We didn’t call it an offseason…We called it separation season,” said Stephenson. “It was the time for individuals to separate themselves from where they were and time for us to work to separate from our opponents. We focused on the small details and doing what we need to do to close out games. That has carried over into our first week of practice. Blocking and tackling are what we have spent a lot of time on. Big games come down to those things.”

Calhoun returns an experienced group on offense that looks to build off a 2020 season in which they averaged 33.2 points per game, including five 40-plus point efforts.

Quarterback Christian Lewis enters his senior season and his second year as a starter after putting up big numbers last year with the help of a deep group of skill players around him. The Jackets are once again deep at receiver and running back, with senior speedsters Cole Speer an Quin Smith leading the receiving corps and a backfield of Gage Leonard, Caden Williams and others who look to fill the void left by the talented Jerrian Hames who graduated this past spring.

The offensive line has multiple veterans back as well to lead the way for the Jackets in the run game and pass game, including seniors Kendrick Kirby and Jace Warren.

“We’ve got a lot coming back,” said Stephenson. “Having the guys up front that we have like Kendrick and Jace is a plus. We have solid guys that can carry us and make it easier for the playmakers we have at the skill positions. We’ve got the potential to be really good on offense, but the goal for us and our focus is on ball security and protecting the football. We’ve got to win the turnover battle. That is the difference in winning and losing those crucial, close games.”

The defensive side of the ball was no slouch either in 2020 for Calhoun as the group gave up 18.6 points per game, including seven efforts of allowing 14 points or less. The Jackets have some big holes to fill on the defensive line and at linebacker after several were lost to graduation following last season, but there are several players ready to step up and take advantage of their chance at increased playing time. Leaders on the defensive side include senior linebacker Christopher Lewis as well as Speer and Smith at defensive back. Leonard, who transferred to Calhoun this past offseason before his senior year is a name to watch as well at safety. Stephenson said there are several more that may not have the name reputation yet due to others playing in front of them the last few years, but Jacket fans will enjoy getting to know them over the course of the season in 2021.

“With our experience on the perimeter with both corners back in Cole and Quin, we feel good about that area of our defense,” said Stephenson. “Those are solid guys there that can make calls and make plays for us. Losing two guys up front hurts, but we’ve still got good players on the defensive line and at linebacker that we are going to count on. Early in the year will be big for those guys to get game experience and see what they can do. They have the potential to be really good players. Overall, I think we have a good mix of experienced and new guys on the defensive side of the ball. Those should balance well and help turn our defense into a strong unit this season.”

The Jackets will open the 2021 season with three games on their home turf at Hal Lamb Field at Phil Reeve Stadium. First up is longtime northwest Georgia rival Dalton on Aug. 20 at 7:30 p.m. They fill out the rest of their non-region schedule with home games against McCallie (Aug. 27) and Cedartown (Sept. 3) and road trips to Ridgeland (Sept. 10) and Woodstock (Sept. 17) before opening their Region 7-AAAAA schedule on Oct. 1 at home against Hiram. With only six teams in their region, each region contest is important, but trips to Blessed Trinity (Oct. 8) and Cartersville (Oct. 29) are definitely two that are circled on the calendar for the Jacket faithful as they try to avenge their two region losses from 2020.

Stephenson said his team has high goals as they have begun preseason practice for the 2021 campaign, but there are several fundamental keys his team must focus on in order to achieve the success they are aiming for over the next few months.

“We know what we have to do to change our outcome this year,” said Stephenson. “Big games that we lost last year came down to a few things here and there, a few plays. Blocking, tackling and turnovers are a few of those. We’ve definitely made that clear in our first week of practice. Winning and losing comes down to small details. Small details determine winning or losing games.”

Ballard stumbles against No. 7 Humboldt in 3A District 2 opener: Bombers fall on the road, 40-0

Akron man gets 15 years in prison on weapons violations