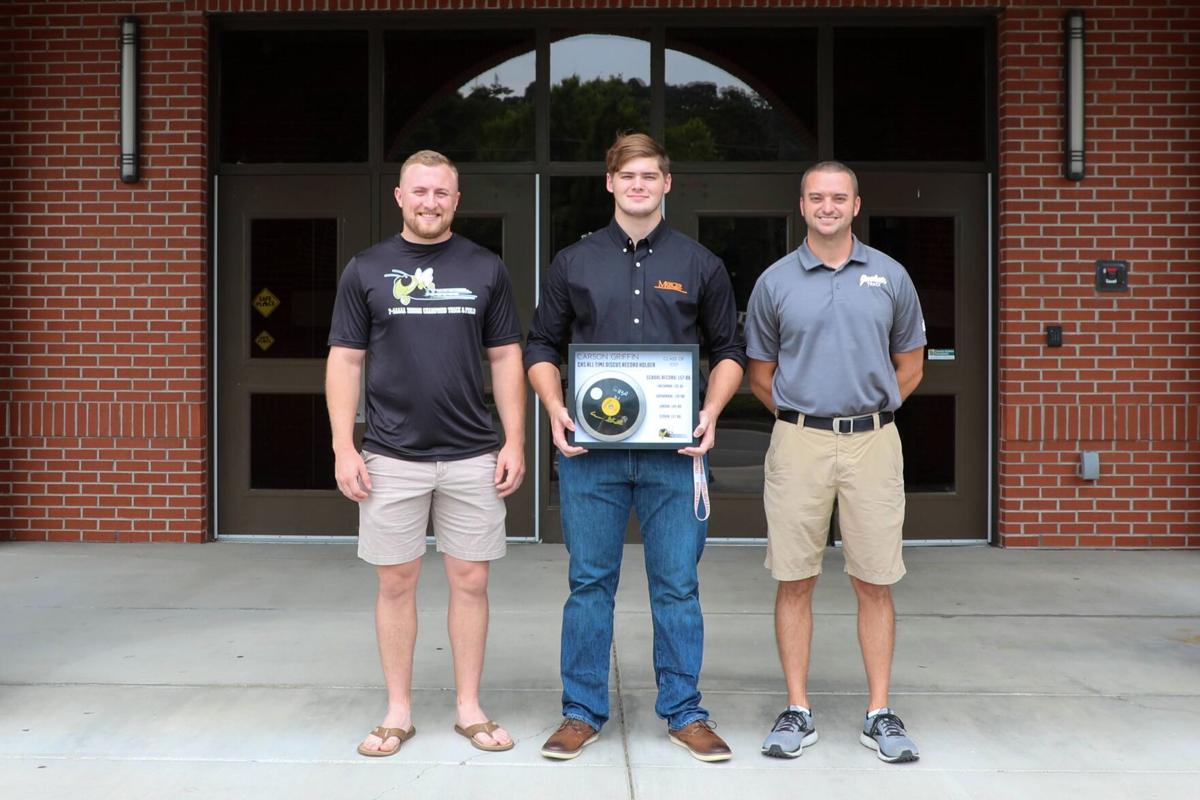 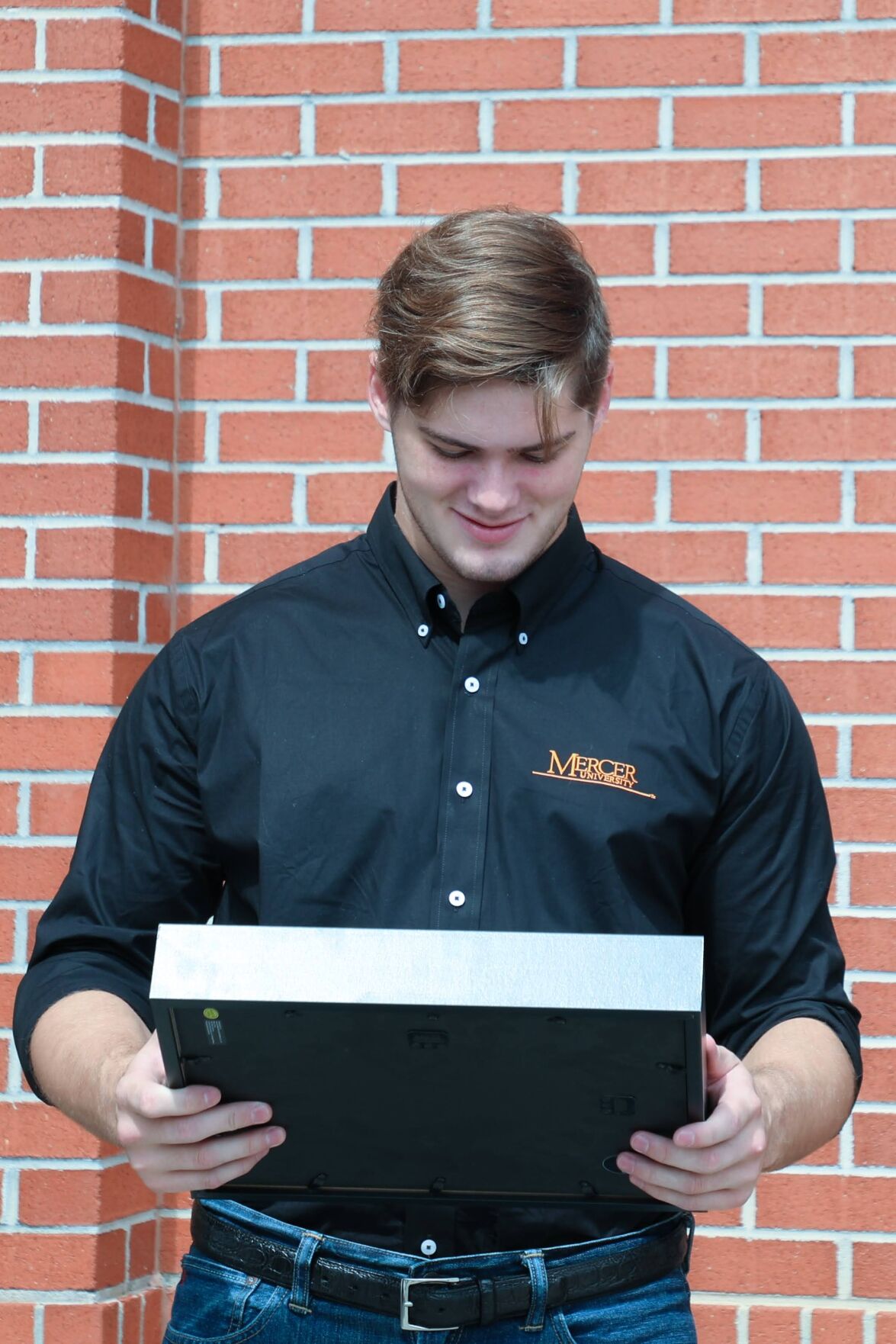 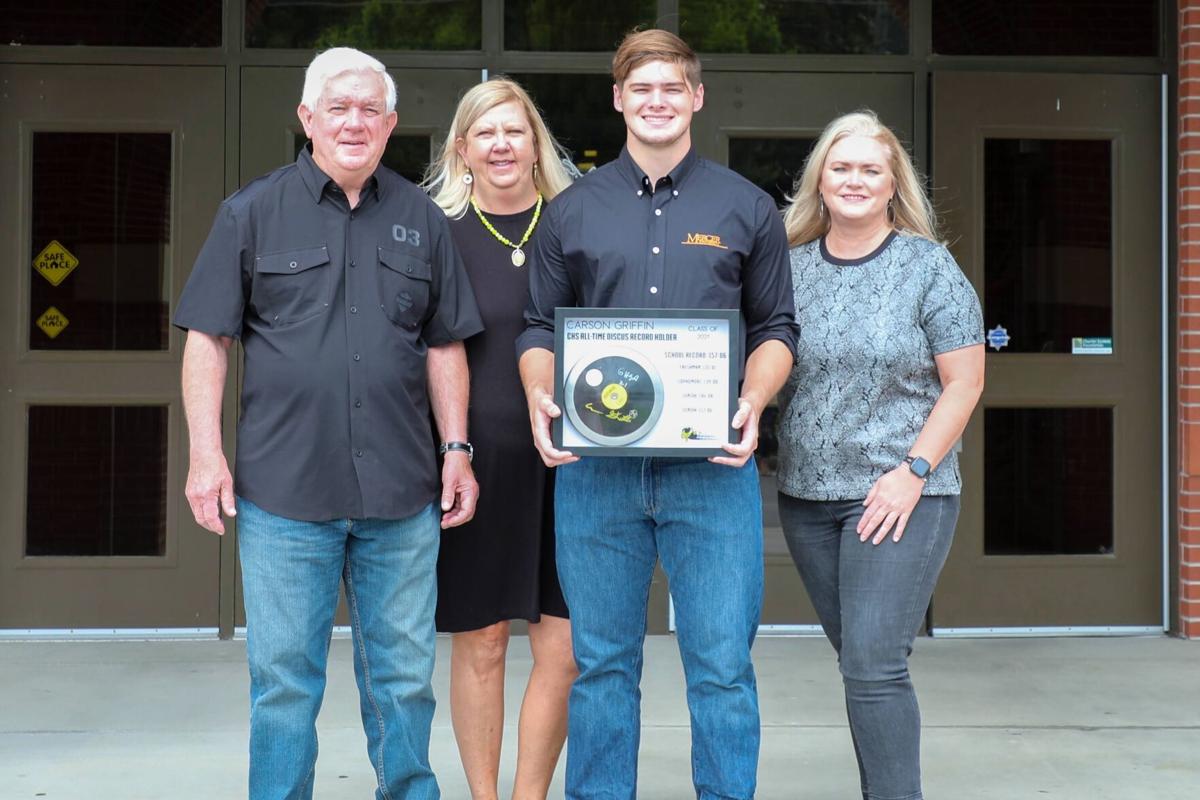 Carson Griffin with his mother Melissa Griffin (right) and his grandparents. 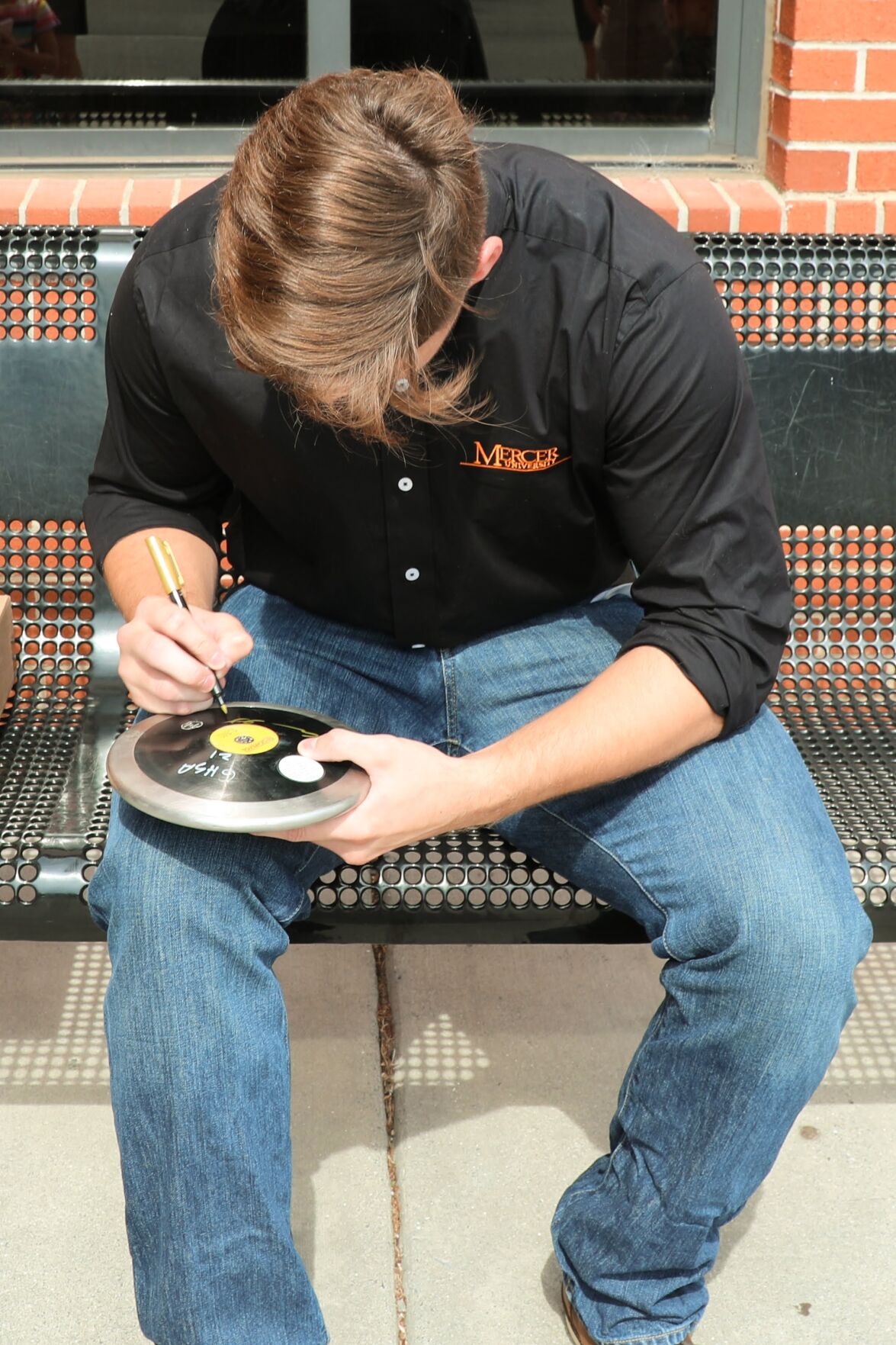 Carson Griffin puts the final touches on his high school discus before it's placed into a shadow box commemorating his grade-level and school career records at CHS. 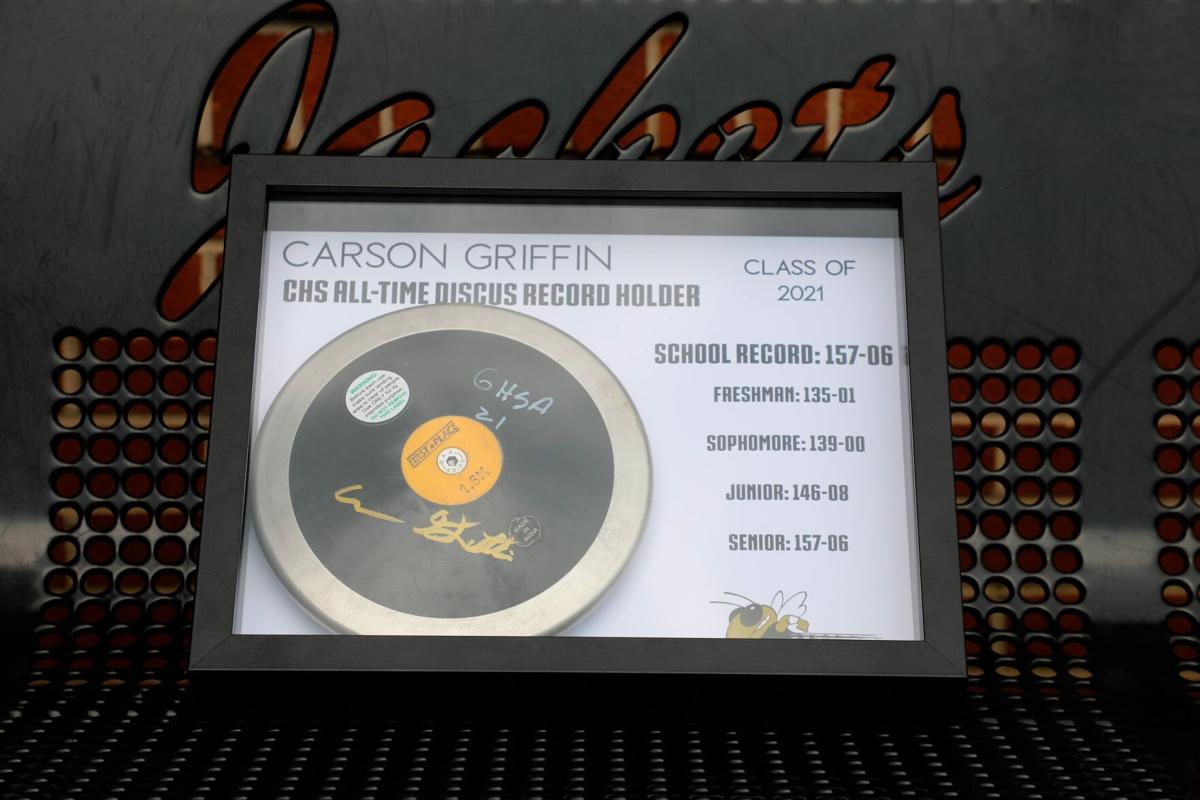 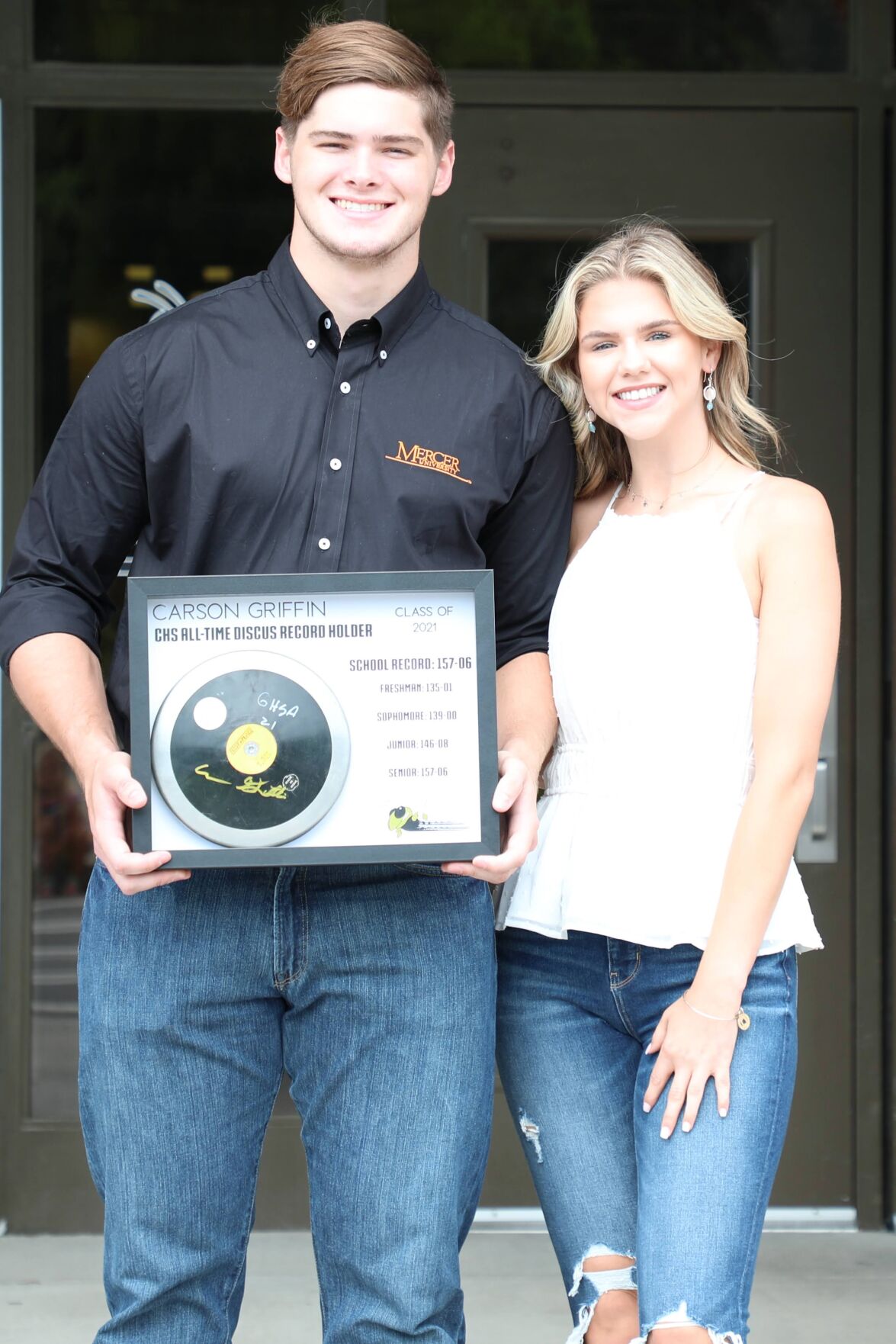 Carson Griffin with his mother Melissa Griffin (right) and his grandparents.

Carson Griffin puts the final touches on his high school discus before it's placed into a shadow box commemorating his grade-level and school career records at CHS.

For anyone looking through Calhoun High School track and field records in the future, one name in particular might stick out, especially in discus.

Starting in his ninth grade season, Carson Griffin began making a place in the record books for the Yellow Jackets, and by the time he was done, he’d shattered every single discus record in the school’s history.

“It was a pretty special experience to watch Carson grow throughout high school,” CHS head track coach Brant Murry said. “From the time he broke his first record as a freshman we knew he had a special athlete and knew he had an opportunity at our school record in the future.”

Even while leaving his mark on the record books, Griffin chose to do so quietly and modestly, according to his coach.

“Carson never sought out attention or had to tell anyone about his accomplishments, he always let his throwing do the talking for him,” Murry said. “He’s a leader, he’s well-liked by his peers, and all-around good person; and as a coach, I am a better person to have coached him.”

Along the way, Griffin also chose to pass down his knowledge and experience to others on his team.

“What was great to watch was his influence on our younger throwers as he got older,” Murry said. “He will be missed greatly in more ways than just for how far he could throw the discus.”

Of all the sports he’s played, Griffin said track might have made the biggest overall impact on his life as an athlete so far.

“My accomplishments in track stand out the most to me,” Griffin said. “I enjoy looking back at my accomplishments for football as well, but I feel my records I have broken are something that allows my name to be imbedded at Calhoun for many years to come.”

Griffin, who signed to play football at Mercer in March said track helped prepare him for the next level.

“Being a part of the track team prepared me for the next level at Mercer, arguably, as much as football did,” Griffin said. “It taught me that the overall goal is to win as a team but to also strive for personal accomplishments. Track has also created many personal relationships for me that I believe will help many greatly in my near future.”

His high school coaches felt it was important to honor Griffin as he leaves CHS for college, presenting him with a shadow box Friday morning that containing his high school discus and listing all the records he established along the way as the CHS all-time discus record holder.

“To be able to accomplish what he did throughout his career for Calhoun track and field was remarkable,” Murry said. “Whenever you have an athlete that impacts your program in such way that Carson has, you commemorate their accomplishments. To have a record is special. It signifies that no one at that level has been able to do it better. But to be able to say at every grade level that you were the best is a tremendous accomplishment.”

Griffin is one of only two in CHS history who holds a single event school record at every single grade level, according to Murry.

“In the history of our program, we only have one other athlete to accomplish this mark and that was Jeff McBee in the 400,” Murry said. “Carson is our first field event athlete to stamp his name in one event.”

Ready now to move on to the next level as a student and an athlete, Griffin said he appreciates the award and his time as a Yellow Jacket.

“It is a great honor. I always strived to be the best I can be at everything I do especially in athletics,” Griffin said. “And through the help and preparations from my coaches especially Coach Murry, I believe I couldn’t be more prepared for the next step in my career.”