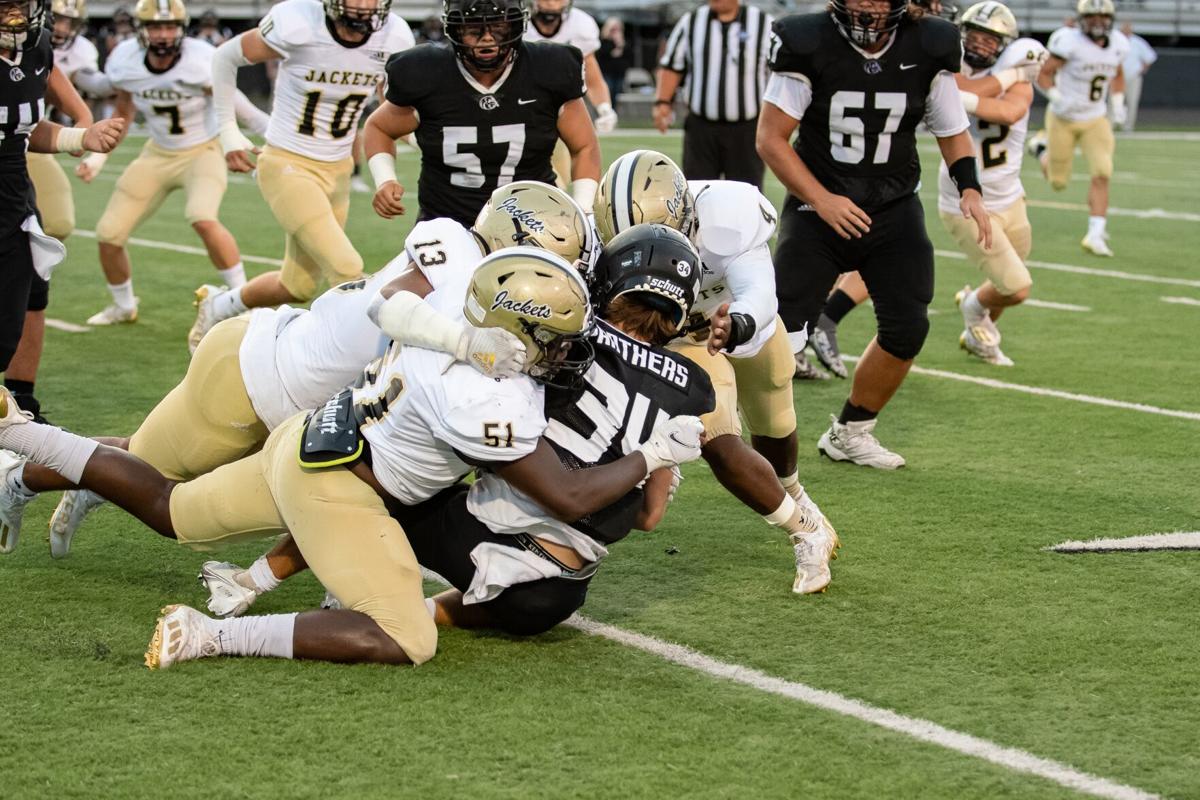 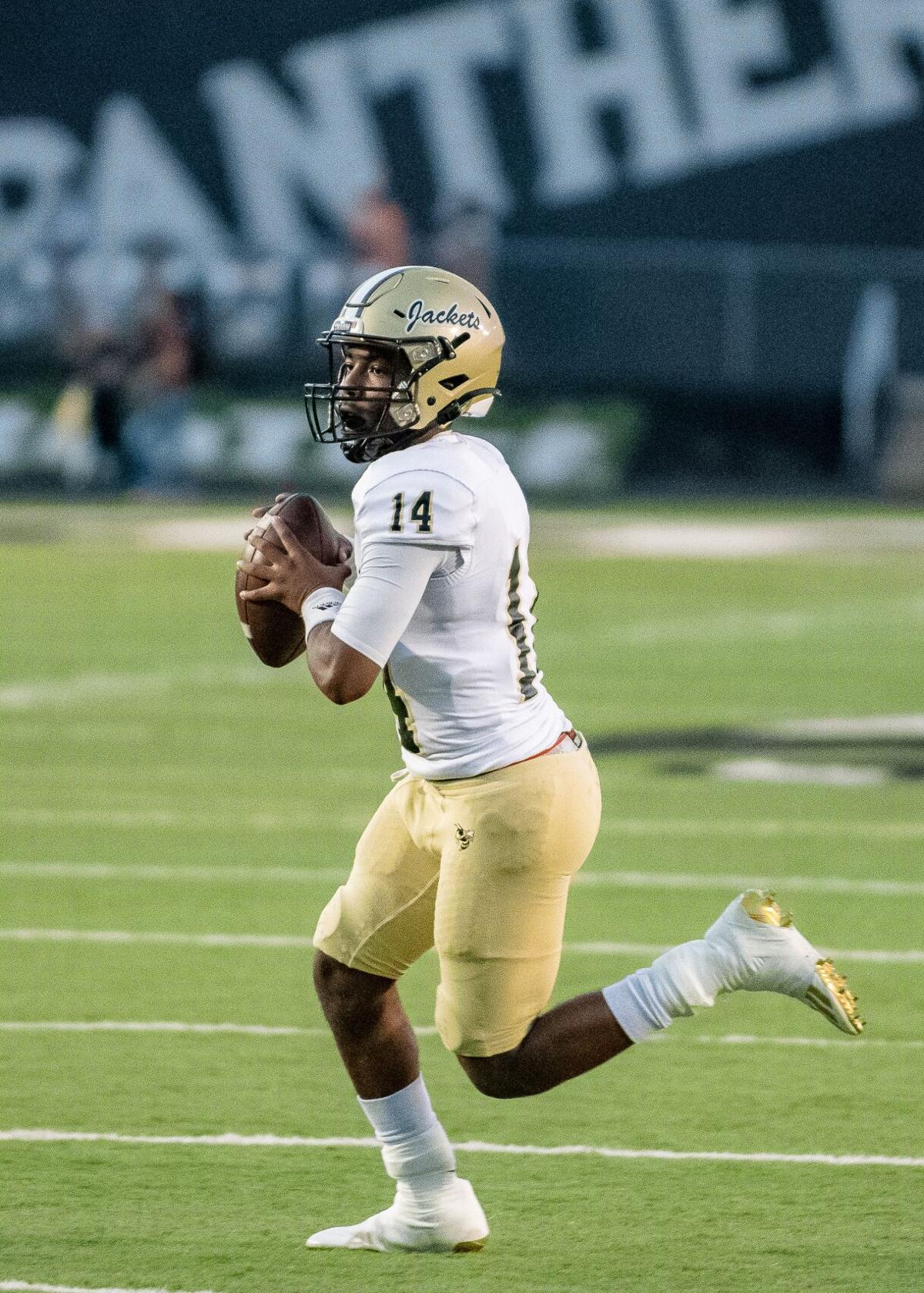 Calhoun quarterback Christian Lewis got the Jackets on the board early and often with four first-half touchdown passes last Friday night at Ridgeland.

Calhoun quarterback Christian Lewis got the Jackets on the board early and often with four first-half touchdown passes last Friday night at Ridgeland.

The Calhoun High School football team will try to remain road warriors when they travel to Woodstock Friday night.

The Yellow Jackets ended a two-week layoff last Friday night in Rossville with a one-sided 56-7 victory over Ridgeland and the visitors did not look like a team that hadn’t played in a while — scoring 35 points in the first quarter to seize control immediately.

“It was a fun game,” Calhoun head football coach Clay Stephenson said. “We wanted to come out and play real well right from the get-go and it was great to see the kids do just that. I know we hadn’t played in a couple of weeks and you never know how a team is going to look when they been off like that, but I know the kids were super excited about playing and they were ready to go. And I thought they showed that from the very first whistle, which is exactly what we were looking for.”

Finishing with over 400 yards in offense while holding Ridgeland to less than 120, everyone on the roster played. Coach Stephenson and his staff played their starters, their junior varsity teams, and all their freshmen as the youngest players on their roster outscored the Ridgeland varsity, 14-7, in the fourth quarter after the team from Gordon County led 42-0 at halftime.

“It was great to see everybody that we played do such a good job, “ Stephenson said. “It was a lot of fun to see them playing so well and playing so hard. For some of those guys, it was their first time out there under the big lights on Friday night and I thought they handled it very well. But I don’t think there’s any question that after not playing for two weeks and losing the last game we had played, the kids were super excited about getting to play again and it showed.”

Now they remain on the road this week to play winless Woodstock Friday night before closing out their non-region schedule next Thursday back at Phil Reeve Stadium against Cedartown in a makeup game after they could not play on their original date because of Covid-19 issues that forced Cedartown to call off two games.

“We’re excited about getting to play next week,” Stephenson said. “We were really disappointed that we didn’t get to play when we were supposed too, but we’re both off next week and we were able to work things out and reschedule the game.”

Woodstock stands 0-4 on the year and the Wolverines have struggled to this point, having been outscored, 146-21, and shutout twice already this year.

They have been silenced offensively by Sequoyah, 28-0, and Creekside, 48-0, and lost 49-14 to neighboring River Ridge in their highest scoring game of the year. Last week, the Wolverines fell 21-7 to Campbell in their tightest game thus far.

Coach said he knows Woodstock will be a formidable foe but the emphasis will be on how Calhoun is playing and not the Wolverines.

“We don’t really know that much about them because this is only the second time we’ve played them. We do know they are a 7A program so they’re a big school,” Stephenson said. “But our main focus in these non-region games is us and how we’re doing. We’ll learn more about Woodstock and what they want to do once the game gets going, but our concern right now is how we’re doing. Are we executing? Are we doing what we’re supposed to be doing?

“That’s our focus right now and that’s the way we’re approaching our game against Woodstock. We just want to see the guys continue to get better and we want to build on the way we played Friday night.”

From the outset against Ridgeland, they were clicking, connecting on long passes and making long runs while defensively, the Panthers only threatened to score once before they did cross the goal line with just 7.5 seconds to play in the game against the youngest players in the Calhoun program.

What they did all night long was simple. Move the ball with little resistance while not letting the Panthers get into any kind of offensive rhythm with their Wing-T offense.

It took them just four plays to score their first touchdown and they didn’t need a lot of snaps to finish with six scores in the first half against the Panthers.

On that first touchdown, quarterback Christopher Lewis threw a 44-yard pass to Payton Law and then after a positive and a negative play, senior Quin Smith took a screen pass from Lewis into the end zone from seven yards away. After the first point-after try of the night, they held a 7-0 just 106 seconds into the game.

After Ridgeland picked up a first down, thanks to a Calhoun penalty, the Panthers couldn’t get going and punted it 22 yards, giving Calhoun the ball at their own 48. Two running plays put them in a third-and-one, but instead of going for the first down, Lewis fired a 43-yard aerial to an open Cole Speer for the touchdown and Calhoun was up, 14-0.

The Panthers fumbled the ensuing kickoff and Issac Brooks recovered, giving the Jackets great field position at the Ridgeland 22. And they quickly capitalized with Speer going 22 yards untouched for their third score less than four-and-a-half minutes into the game.

Staying on the ground, Ridgeland ran three plays and punted the next time they had the ball and the visitors took over at the Panther 40. An illegal procedure negated a first down run, but Lewis hooked up with junior Dustin Kerns for 16 yards and then Law for 19 more and the Jackets were knocking on the door at the five. Lewis then went back to Law for a short pitch-and-catch that elevated their lead to 28-0.

Ridgeland ran two plays on its next drive and fumbled, giving the Jackets the ball at the home team’s 28-yard-line. On the first play they went back to the end zone, but a penalty took the score off the board and moved them back. After two running plays by Caden Williams brought up a third-and-long, junior Brendan Gray went high over the middle for a great, leaping 25-yard catch to put his team inside the Panther 5.

After a negative running play, Lewis went back to Gray and this time instead of going up, Gray lunged out for the ball, his body parallel to the ground, to pull in a sensational 10-yard touchdown pass, making it 35-nil with still 10.5 seconds to go in the first quarter.

Just after the second period began, they would add their sixth and final touchdown of half on Speer’s second rushing score and third overall in the first 16 minutes of the game. Starting on their own side of the field, Law and Cam Curtis caught passes and then Speer went 33 yards to his left to complete his hat trick.

At that point, Stephenson and his staff began to put in the backups at different spots and that is when Ridgeland made their first threat.

Aided by a facemask call, pass interference, and a personal foul call, all 15-yard penalties, the Panthers went from their own 40 to the Calhoun 7. The defensive starters then came back on the field and the Panthers wound up going backwards on the next four plays and were held out.

Stephenson said the team is glad it isn’t looking at another week for a while now.

He said it will be a short week with the rare Thursday contest, but they’ll adjust.

“It will be different,” he said. “We’ve never had a game on Thursday, so it will be a short week of preparation for us, but we’ll figure it all out. We wanted to play on Friday, but we couldn’t find any refs. All the crews were booked and so we found a crew that was able to work the game if we could play on a Thursday and so that is what we’re going to do. But super excited about getting to play and I know the kids are well. They were very happy when they found out about it, so we’re looking forward to that next week.”

But, he quickly added that their first and only priority right now is Woodstock this Friday night.

The Yellow Jackets are 2-1 overall.

New-look Grizzlies ready to bear down, chase an NA3HL championship