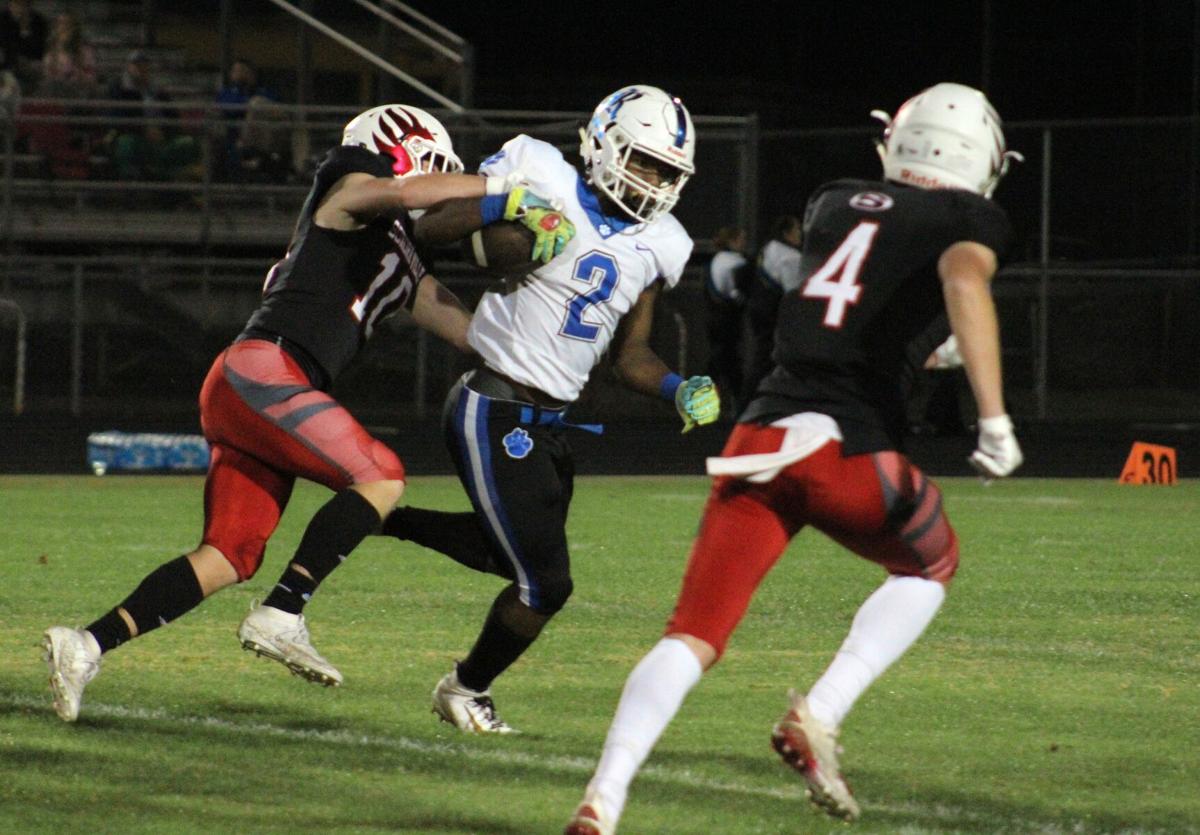 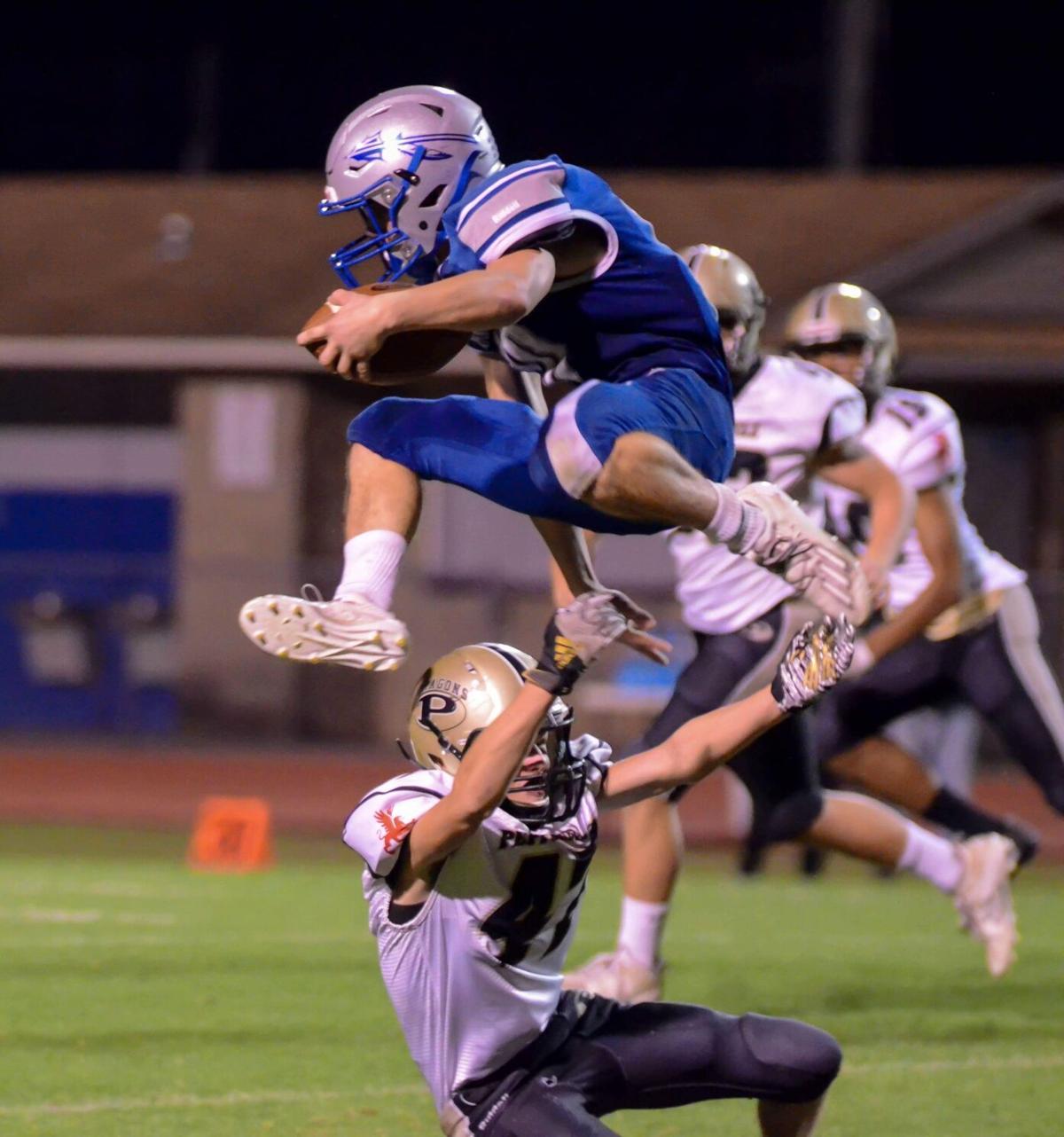 Gordon Central’s Brison McGinnis leaps over a Pepperell defender during a recent game in this file photo.

Gordon Central’s Brison McGinnis leaps over a Pepperell defender during a recent game in this file photo.

Only the county football teams are in action this week, as Calhoun prepares for their first-round playoff game on Nov. 27. Sonoraville hosts Coahulla Creek on Friday at 7:30 p.m., while Gordon Central hosts Model on Saturday at noon.

Sonoraville (4-5, 2-5) comes into this week fresh off two-straight wins, including a 26-23 victory over Ringgold last week. Sonoraville head coach Denver Pate wants to keep that momentum going Friday night for his seniors.

“It’s good to be back on a winning streak,” Pate said. “You want to send these seniors out the right way, and I think this team with them overcoming adversity deserves this. Being able to get back to a .500 overall record is key.”

Coahulla Creek is coming into this game after a shellacking by Ringgold (55-14) two weeks ago and were off last week to lick their wounds. The Colts have had a disappointing season at 2-7 (1-6 in region play) and are looking to put it all on the line in their last game against the Phoenix.

On offense, the Colts are led by quarterback Kace Kinnamon and running backs Tyler Locklear and Titus Underwood. Pate knows his defense has to slow them down.

“Just looking at Coahulla — their quarterback does a great job of running their offense,” Pate said. “He does a good job of getting the ball down the field, and he’s efficient in the run game. No. 32 (Locklear) is a big back — him and No. 5 (Underwood). We got to make sure we do a good job of swarming to the football.”

Underwood is the most impressive player on Coahulla Creek according to Pate. In addition to playing running back, he also plays linebacker on the defensive side of the ball and is known for his quarterback pressures. He will definitely be one to keep an eye out for on Friday night.

“They (Coahulla Creek) spell him on offense more than they do defense. He’s not an overly fast kid, but he’s a big, thick kid who is tough to bring down at times. We got to make sure we do a good job with him. No. 40 (Robbie Wiggins) also stands out. He’s their nose and tight end. He’s another big-bodied kid. Getting movement on him from an offensive standpoint is going to be key.”

Pate wants to see his team start strong and get ahead early. That’s something that did not happen in the last two games.

“I think jumping out early will be beneficial for us,” Pate said. “We’ve played two tough contests and were able to play from behind. You don’t like to be in those situations, but you like for those kids to overcome adversity. We need to play ahead of the sticks and eliminate turnovers. We had a couple of costly turnovers last week on our side of the field.”

A win on Friday night would mean a lot to the Phoenix, as they will finish the 2020 season on a high note after battling a lot of adversity throughout the fall.

“You hate it with the COVID-19 deal taking 19 kids one game and 16 another,” Pate said. “At the same time, everybody has to deal with it. Looking back on it, I told these coaches we’ll be kicking ourselves with the LFO and the Murray game. At the same time, it’s life. These kids are going to deal with struggles in life. It’s about overcoming adversity and dealing with the situation and getting better because of it. I think these kids have done that and shown that throughout the year. I think it would be a huge step in the right direction for this program to be able to finish .500 even though it won’t mean anything in the playoff picture. I still think the direction that these guys have this program going in is the right direction.”

After last week’s 35-32 win at Dade County, the Gordon Central Warriors (3-6, 2-3) are preparing for a physical slugfest against Model at Ratner Memorial Stadium. Gordon Central head coach T.J. Hamilton expects a quick game, based on both teams wanting to do the same thing – run the ball.

The game was originally scheduled for earlier in the year but was rescheduled because of COVID-19.

In last season’s meeting between the two teams, Model defeated the Warriors 21-0 but only could muster one offensive touchdown as Gordon Central beat themselves more than anything by throwing two pick-sixes. If Gordon Central can slow down Wallace and the Model running game and win the battle on special teams, Hamilton has confidence that his team can have success.

“I think he (Wallace) is a 1,000-yard rusher right now, so that’s been something we’ve talked about slowing down. If we can slow him down, of course, we will win that game. He’s really good at what he does. (Winning on) special teams and playing the battle of field position (are key). If we can win the field position battle, which we’ve been losing all year, we feel good. Javin (Baker) has got a little bit of a better leg than Allen (Garcia) does, but Allen has been automatic on extra points. I bet he’s missed only one all year, and that was early on. I do believe special teams will play a big role.”