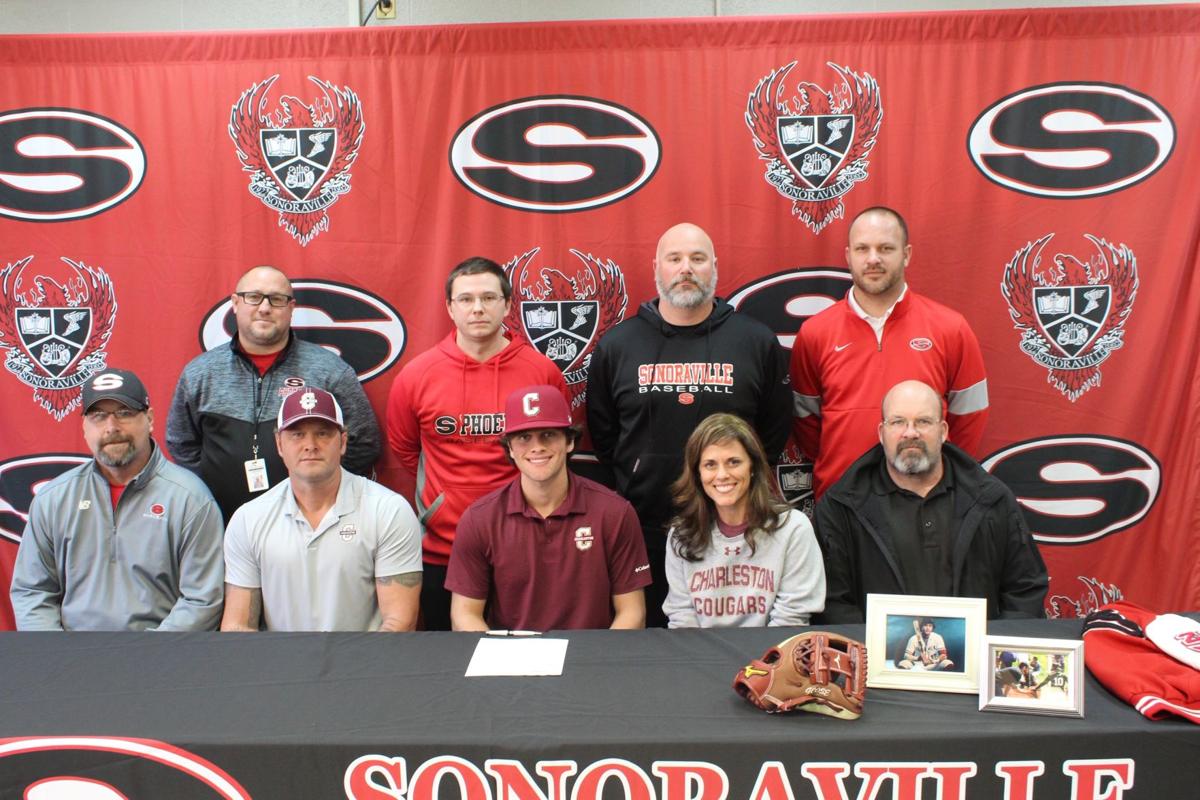 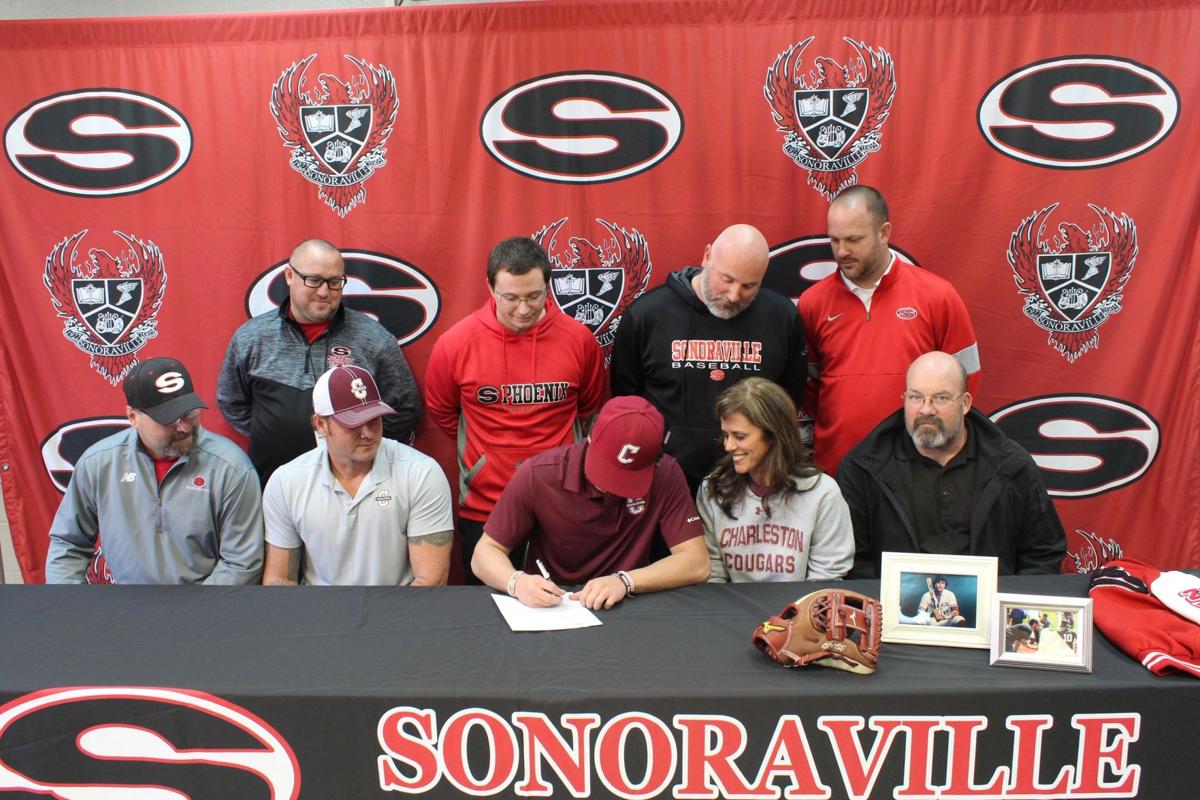 Sonoraville senior Wyatt Castoe signs his papers to play collegiate baseball for the College of Charleston during a signing ceremony at Sonoraville High School on Wednesday, Nov. 13.

Sonoraville senior Wyatt Castoe signs his papers to play collegiate baseball for the College of Charleston during a signing ceremony at Sonoraville High School on Wednesday, Nov. 13.

Sonoraville senior Wyatt Castoe made it official, signing with College of Charleston to continue his baseball career at the next level. Castoe signed his papers Wednesday at Sonoraville High School in front of friends and family.

“I feel like it’s the moment my whole life has built up to,” Castoe said. “Seventeen years of pure hard work, blood, sweat, tears, long car rides, long hours, sleepless nights. Everything has led up to this moment and I’m so thankful for my family, for my coaches, for my friends, for everyone to not give up on me and just stick with me through all (of) the process.”

“The biggest thing I told him was enjoy the moment because you’re never going to get the time back,” Sonoraville Baseball head coach Daniel McArthur said. “Take in every bit of it and make sure that, when you do commit, it’s somewhere you’re going to fall in love with and you’re going to love to be there.”

Castoe’s love of America’s Pastime stems from a very young age, and his affection for the game continues to evolve.

“My first word was ‘Ball,’” Castoe said. “I said that before I said ‘Mom.’ Ever since I could breathe, I’ve just always had a ball in my hand. I literally do it every single day of my life. I don’t take one day off. I know the game doesn’t owe me anything at all, but I owe the game everything because it’s formed me into the person I am today. I’ll always have love for the game.”

Castoe said he had offers from bigger Division I schools, but wanted to play college baseball where he would not be considered just another number on a team.

“I wanted to go somewhere where I’m going to produce as a player and a person and I wanted to get as much dirt time as possible,” Castoe said. “The ultimate goal here is to go pro and I feel like I would have a much better chance of doing that if I went to (College of) Charleston versus going to a bigger school.”

Castoe visited the College of Charleston during his junior year, committing during the experience. Since then, Castoe said he has traveled back to South Carolina liberal arts college multiple times since.

Castoe said the biggest thing he has learned throughout the college recruitment process was patience.

“Every kid is excited, getting their first offer,” Castoe said. “They just want to jump on the first thing. They see this big name and they want to just hop right on it right there, but they don’t want to take the time to sit back (and) think about what’s best for them and playing for their future.”

McArthur said Castoe’s signing is a fantastic moment for the family and the Sonoraville baseball program.

“I’m not necessarily old enough to be his dad, but kind of a proud dad moment,” McArthur said. “Since I’ve been coaching as an assistant and as a head coach, I’ve been more involved I think with his recruiting and just giving insight. To be involved in it and see it come to fruition and ... him actually signing that letter ... it was hard to contain my emotions at the beginning when I had to talk.”

As you can probably begin to gauge, McArthur and Castoe have had a close relationship over the years. The two first met four years ago, when Castoe was a freshman, during 2-on-1 drills. McArthur described the time as a “collision moment.”

“I started vouching for him then to get a lot of playing time for us as a freshman and be on varsity,” McArthur said. “I felt like he could help us. Since then, I feel like our relationship has continued to grow yearly. It’s been fun ... life-changing.”

Over the years, the two men have grown close through the common bond of baseball. However, baseball is not the only thing the two discuss, as Castoe noted McArthur’s mentoring role and how it has influenced his life.

“I’ve always valued Coach McArthur’s input on everything and he’s always been a big mentor and adviser in my life,” Castoe said. “I feel like he’s helped some great choices in my life and he’s never led me in the wrong direction. I respect every opinion that he has.”

During a short speech at Castoe’s signing ceremony, McArthur noted the senior’s maturity and how he arrived at the program with a foundation already in place.

“When you understand that it is just a game, it really starts to take off for you,” McArthur said. “When you put all your stock in baseball, you’re not going to end well because you go 3-for-10, fail seven out of 10 times and you’re doing good. If you put all your stock into that kind of thing, it’s not a fun game, but when you understand it’s bigger than baseball and you can use that platform to do things ... that’s been fun to watch.”

“That’s what the beauty of baseball is,” Castoe said. “It’s the most humbling sport out there and that’s a fact.”

The Latest: Doctor's referral not needed for NCarolina tests

US notifies UN of withdrawal from World Health Organization

Trump says he will pressure states to reopen schools in fall