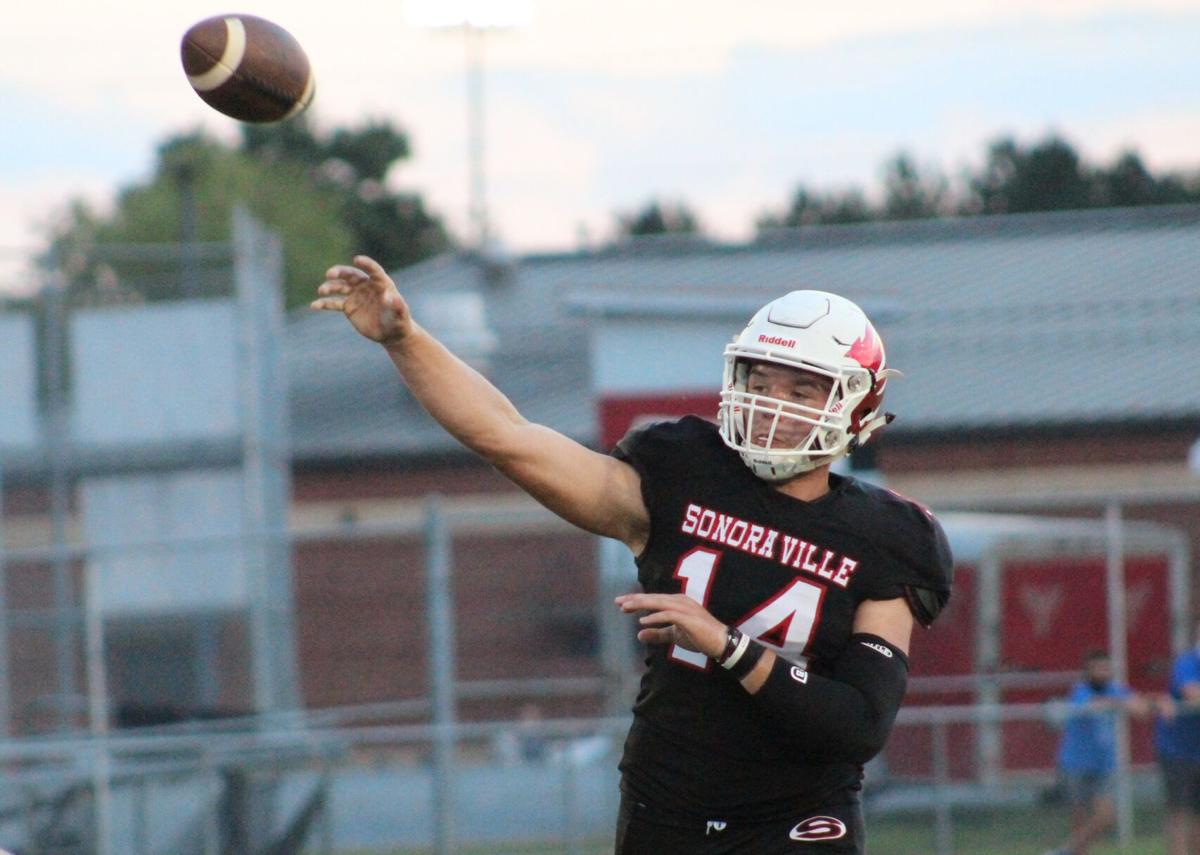 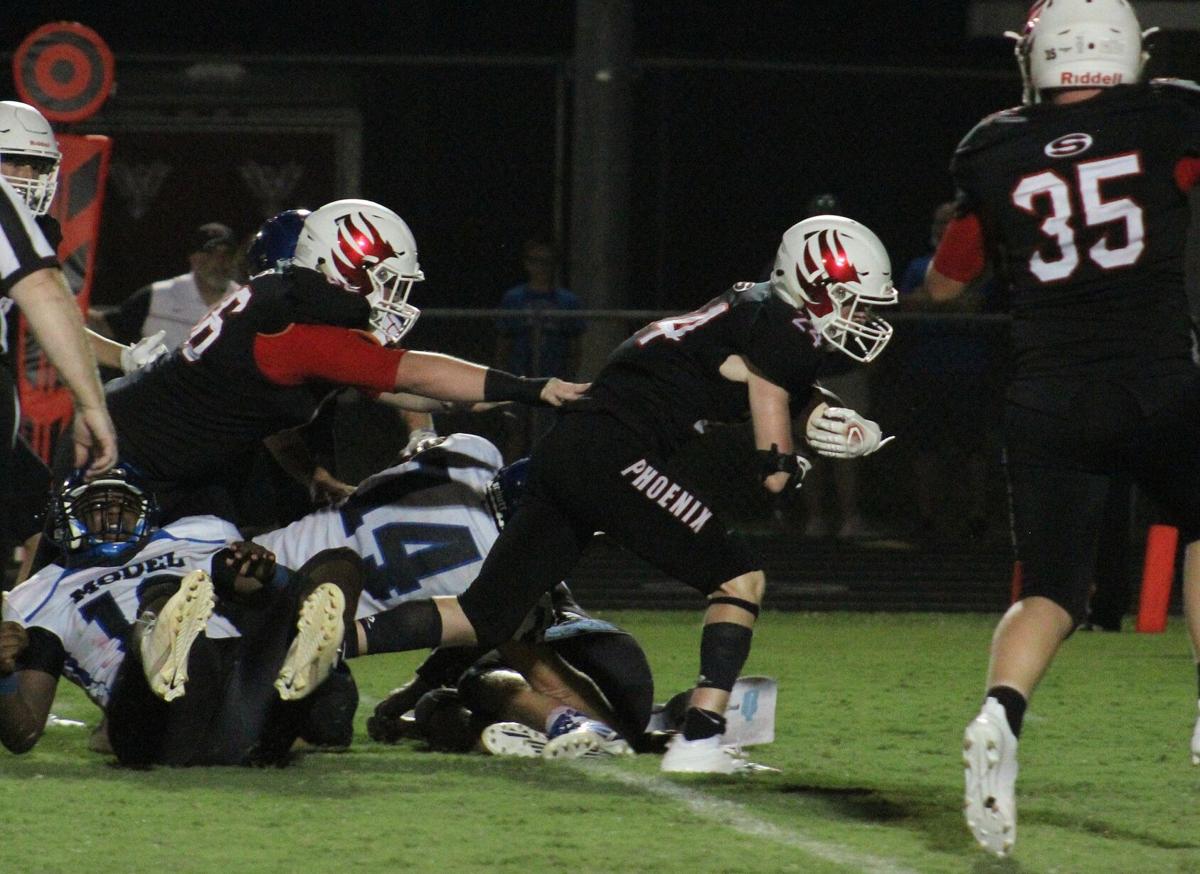 Sonoraville’s Zach Lyles breaks free before lunging for the end zone during the team’s OT win against Model on Friday. 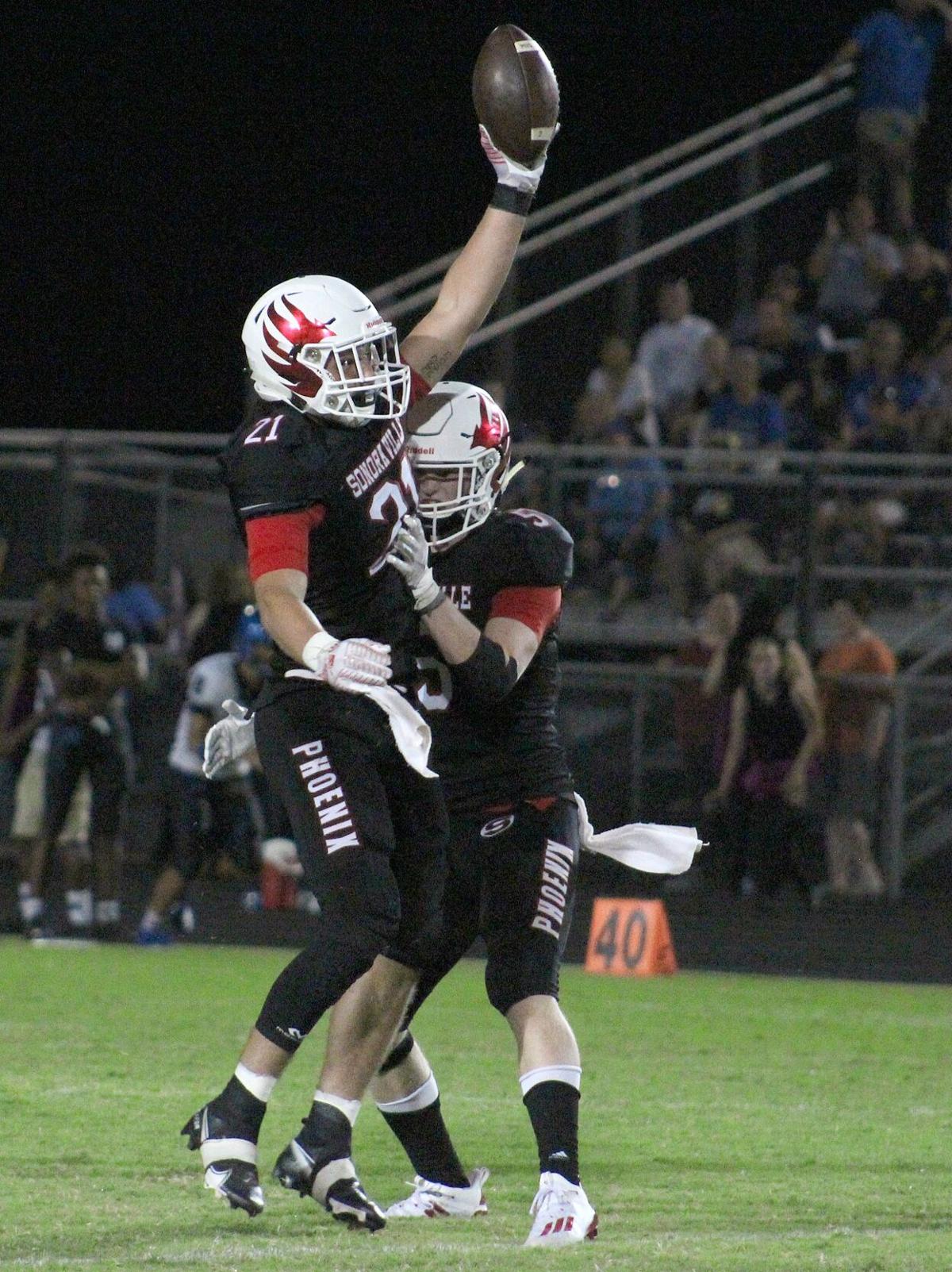 Tanner Folds celebrates on the field after recovering a fumble. 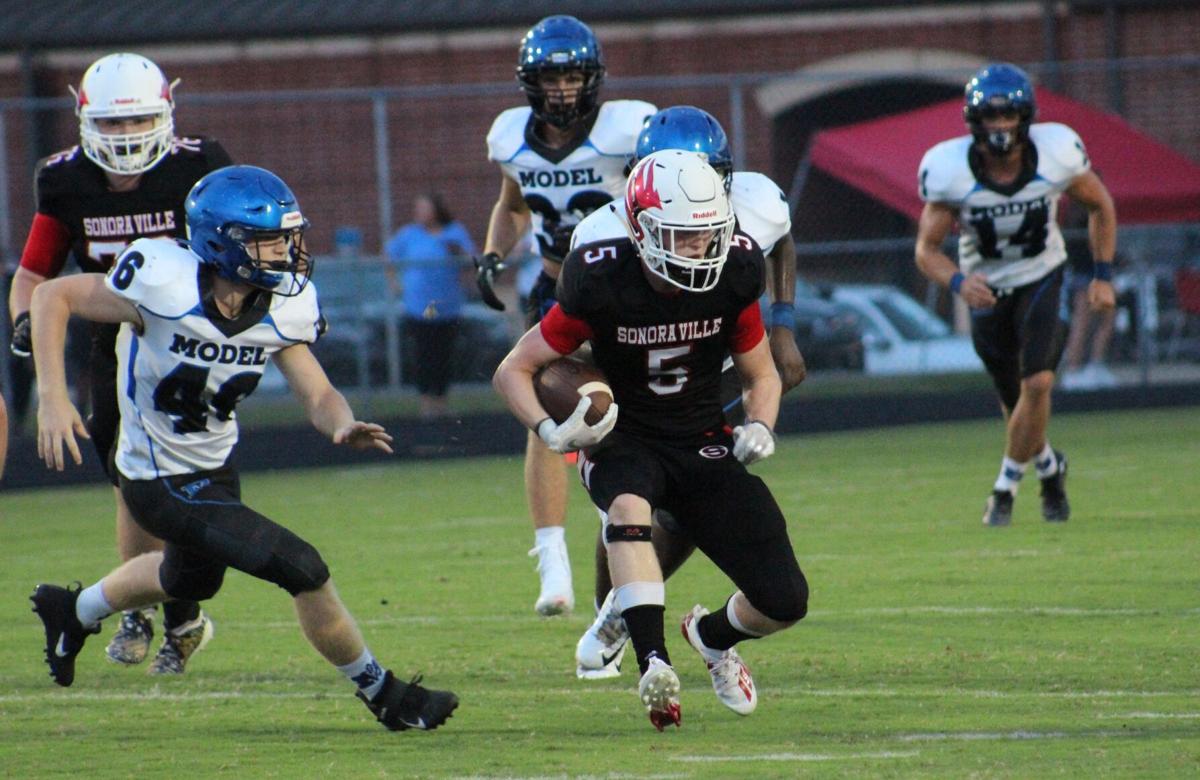 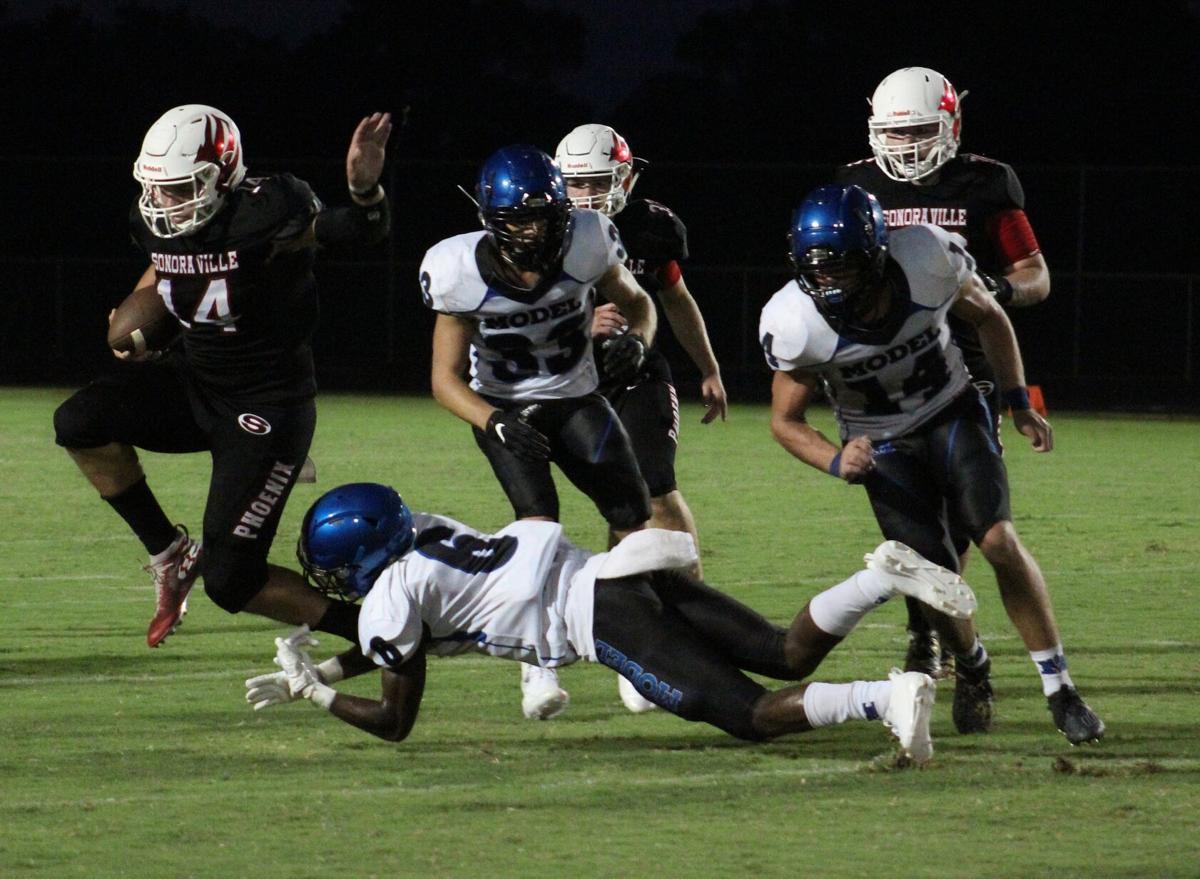 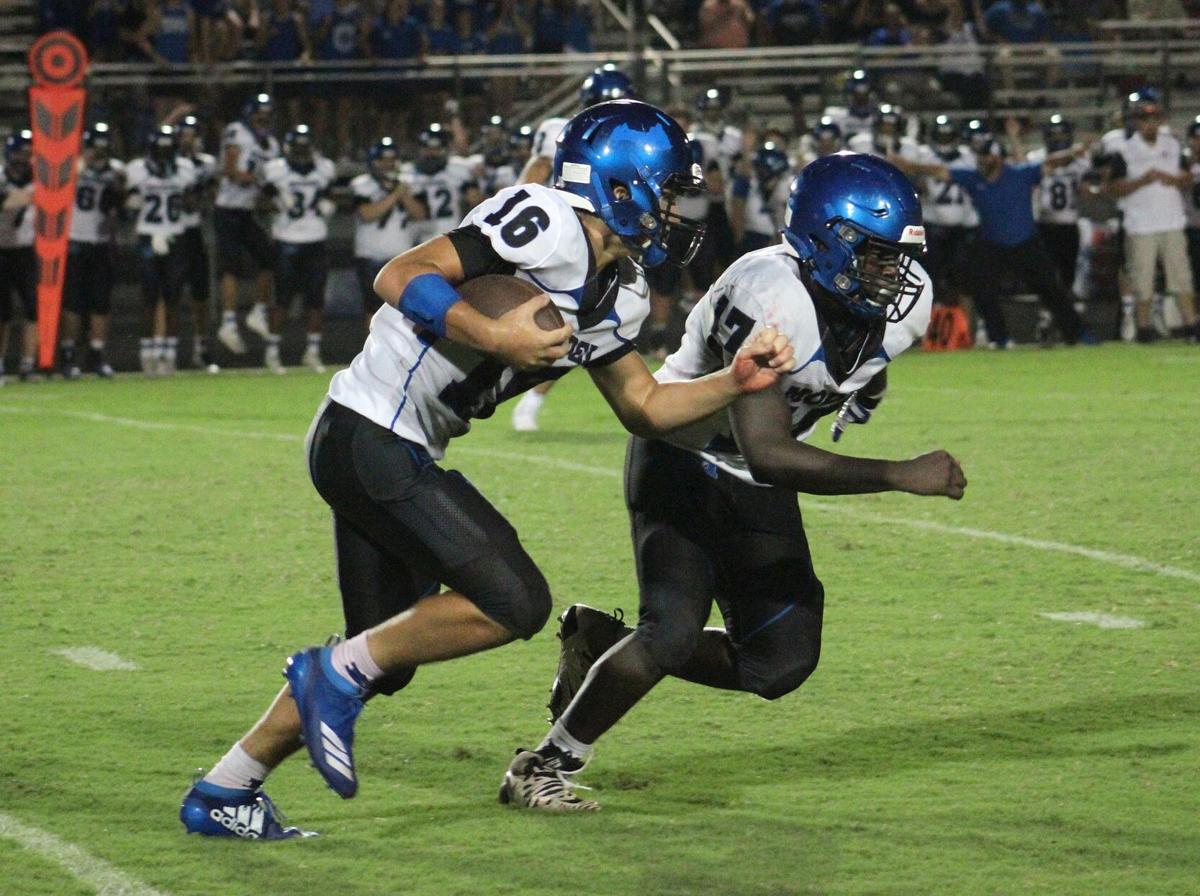 Model defensive back Dillon Silver runs up field after securing an interception while Anthone Williams leads the way.

Sonoraville’s Zach Lyles breaks free before lunging for the end zone during the team’s OT win against Model on Friday.

Tanner Folds celebrates on the field after recovering a fumble.

Model defensive back Dillon Silver runs up field after securing an interception while Anthone Williams leads the way.

The Sonoraville Phoenix won their season opener 20-14 Friday night over the visiting Model Blue Devils after a flag-filled first half gave way to a wild finish late in the fourth quarter and into overtime.

“It was a sloppy game. One thing is to credit the kids for not getting down. They kept fighting, gave themselves a chance at the end,” said Sonoraville Coach Denver Pate. “I think the penalties got better at the end. That first half, I don’t know how many penalty yards we had, probably as many as we had total yards.”

The Phoenix started the game out with some momentum, moving downfield before missing a field goal. The Blue Devils notched a couple first downs on their first possession before losing a fumble to Sonoraville.

The teams traded punts before Sonoraville put together a lengthy, penalty-filled drive to score the first points of the game. Sonoraville took the field on their own 10-yard line before a sack of quarterback Brady Lackey knocked the Phoenix back to the 2-yard line. A pair of long runs from Lackey and wide receiver Joseph McDaniels moved Sonoraville up to about midfield, but then four straight penalties moved the team into a second-and-25 situation.

Two plays later Lackey connected with RB Zach Lyles on a long pass to move the Phoenix inside the Model 20. Two plays after that Lyles punched in the touchdown. The extra point set the score at 7-0 with 5:26 left in the half.

The Phoenix defense again forced a Model punt on its next possession, but then Model’s defense put the Blue Devils on the board after a high snap sailed over Lackey’s head and Model’s Luke Holtzendorf scooped up the loose ball and scored a touchdown. A flag on the extra point attempt was waved off and the score was tied at 7-7, where it would stay until late in the third quarter.

After trading a pair of fumbles early in the third quarter, the Phoenix went on to score the go ahead touchdown on a drive where they converted two separate fourth down attempts, scoring on a Lackey touchdown pass to Lyles. The extra point settled the score at 14-7.

The Blue Devils rallied back on their next possession though, putting together a 64-yard-drive that ended with a touchdown pass from QB Sam Silver to Ben Estes. The extra point tied the game at 14 with less than five minutes to play.

Model defensive back Dillon Silver would pick off a Lackey pass on the next possession and return the ball back to the 45-yard line. The Blue Devils then drove down to the 1-yard line and called a timeout with one second remaining, appearing to have set up the game-winning field goal.

The kick, however, doinked off the left upright, sending the game into overtime. In overtime, teams start with the ball on their opponent’s 15-yard line.

Model’s offense took the field first, and Silver scored on a 17-yard run play that was called back due to a block in the back penalty. The Blue Devils ultimately went three and out.

Sonoraville then took the field and appeared to score on a long run by Lyles, with the line judge signaling touchdown but the referee overturning the call and placing the ball at the 1. Lackey powered in the ball to secure a 20-14 win on a QB sneak.

Pate said that while Lackey didn’t have his best game, he could see the growth and maturity in his quarterback after a few turnovers.

“He moved on after. He didn’t let it linger, like a younger player would have. I think he did a good job overcoming some adversity,” said Pate.

The Phoenix are off next week but will host Chattooga on Sept. 18 at 7:30 p.m. The Blue Devils will play at LaFayette, Alabama, next Friday at 7:30 p.m.