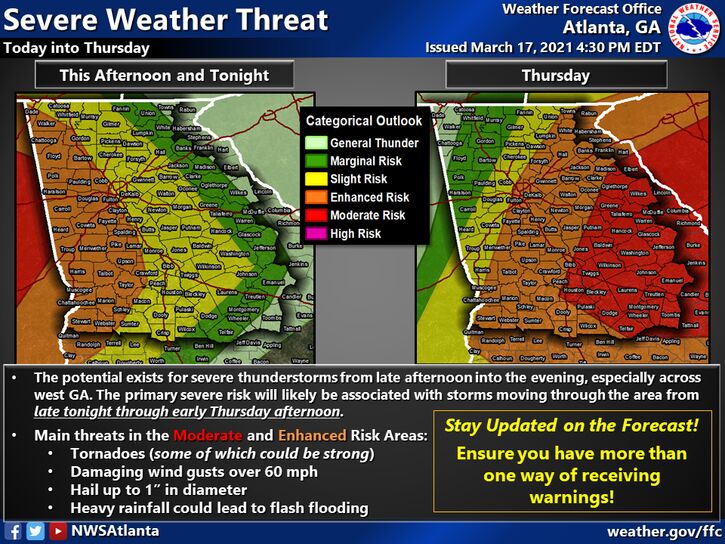 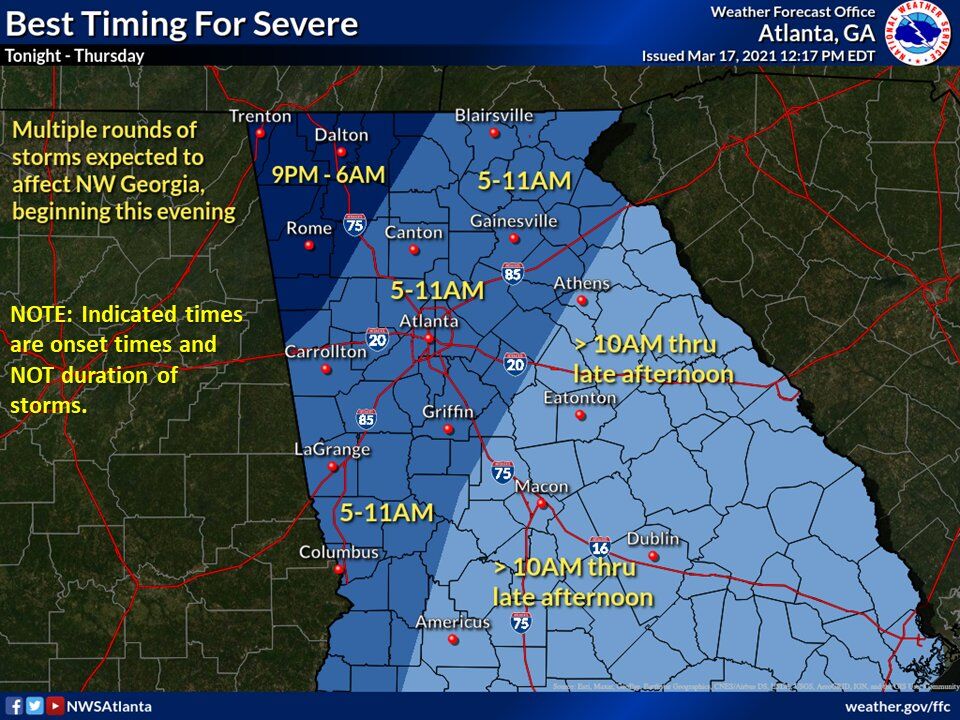 Onset timing of severe threat: While multiple rounds of storms may affect NW GA starting this evening, the main severe risk will be with a line of storms that will enter GA after 12 AM and push across the area on Thursday.

There have been some changes to the predicted weather expected in our area today through Friday and northwest Georgia has been upgraded to an enhanced risk of possible tornadoes developing from the severe storms moving into our area tonight.

Counties in Alabama across the border are under a tornado watch until 7 p.m. That means no tornadoes have been spotted in the area but the conditions are favorable for severe weather or the formation of a tornado.

Tornadoes, damaging winds, hail, and heavy rain will all be potential threats as these storms impact north and central Georgia. Tornado warnings have been issued in other parts of the state, including Birmingham.

The severe threat is predicted for later this evening into the late night hours.

To prepare, Floyd County Emergency Management Director Tim Herrington said people should to download a weather alert app, such as the Floyd County EMA app, on their phone to notify them about tornado watches and warnings.

He stressed the importance of having an emergency notification in place to alert you of potential threats from tornadoes, flooding and flash flooding the area.

In addition, prepare by having a safe place identified at your residence to go to in the event of a tornado during the night time hours, he said.

"Please take the necessary steps to keep your family and friends safe during severe weather incidents," he said.

Rome and Floyd County Schools systems are canceling all afterschool activities for March 17 due to the threat of inclement weather. These cancelations include all childcare and sporting events.

Rome City Schools will be delaying 2 hours in the morning because of the forecast of potential severe weather. Floyd County Schools are off Thursday for a parent teacher conference day.

Hundreds of schools, COVID-19 vaccination clinics, businesses and more shut down across the Deep South on Wednesday as forecasters warned of waves of severe weather including massive tornadoes, downpours and hail the size of tennis balls.

While nearly 16 million people in the Southeast could see powerful storms, the Storm Prediction Center said, a region of about 3 million stretching from southeastern Arkansas and northeastern Louisiana across Mississippi into Alabama was at high risk for big twisters that stay on the ground for miles, straight winds up to 80 mph (129 kph) and destructive hail.

Storms were possible all the way from northern Texas in the west to northern Illinois and as far east as the Carolinas.

A possible tornado knocked down trees and toppled power lines, damaging a home, in the rural Alabama community of Burnsville, but no one was hurt, according to an emergency management official in Dallas County.

Dozens of schools systems in Alabama, Louisiana and Mississippi canceled classes, switched to online learning or dismissed students early, and Mississippi State University moved to virtual teaching because of the potential for danger at its campuses in Starkville and Meridian.

Large vaccination clinics where hundreds of people an hour can get shots without leaving their vehicles were canceled in Alabama, Mississippi and Tennessee. In the Mississippi capital of Jackson, state employees were warned to head to stairwells if they hear weather sirens. Near Birmingham, labor organizers canceled an outdoors event at an Amazon facility where workers are voting on union representation.

At least two waves of storms were likely, forecasters said, and the worst might not hit until a cold front passes overnight.

“The biggest question is how strong to severe these storms are going to be and if they're going to be tornadic right off the bat," said Gary Goggins, a forecaster with the National Weather Service office for Birmingham.

Gov. Kay Ivey placed Alabama under a state of emergency, and communities across the South used social media to share the location of tornado shelters. Dozens of people gathered in a gymnasium that was opened as a shelter in Tuscaloosa, where more than 50 people died in a twister during a weather outbreak that occurred 10 years ago next month.

In Jackson, Tennessee, officials said a civic center and the regional airport would be open for residents seeking shelter.