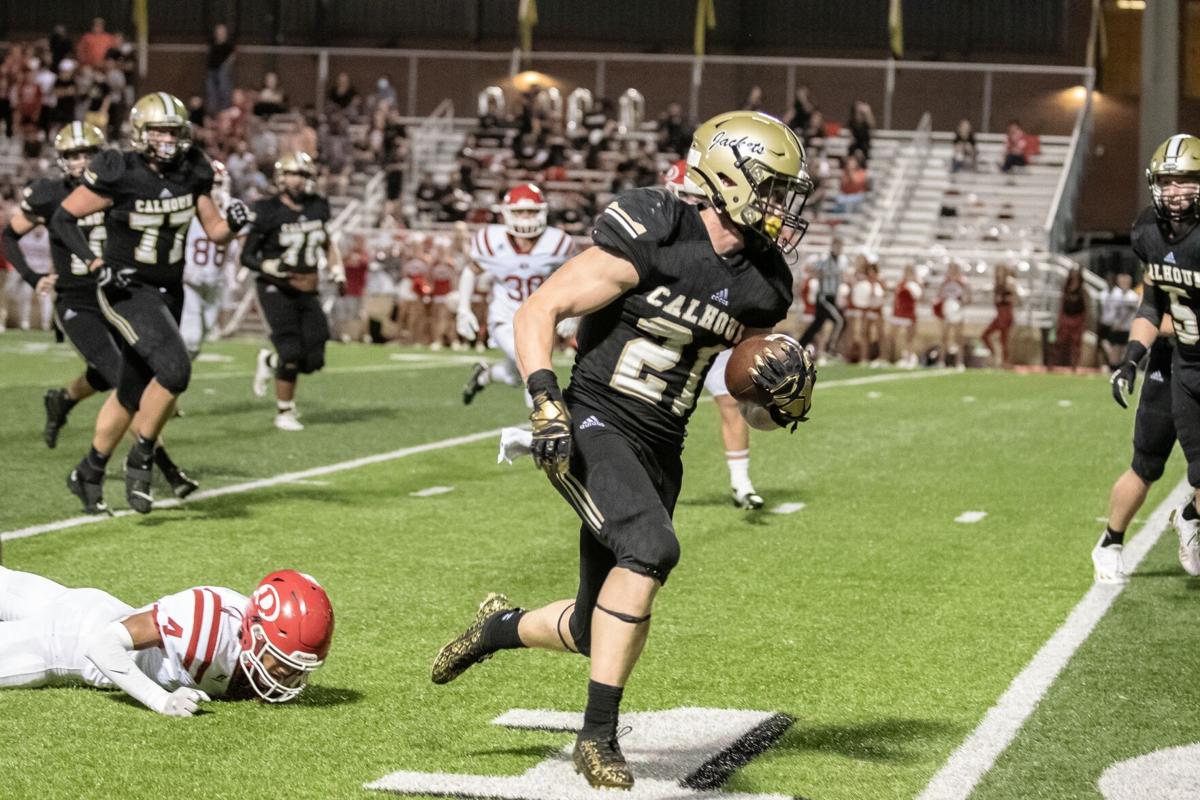 Calhoun sophomore Caden Williams runs in one of his two touchdowns on the night in a 42-35 win over Dalton. 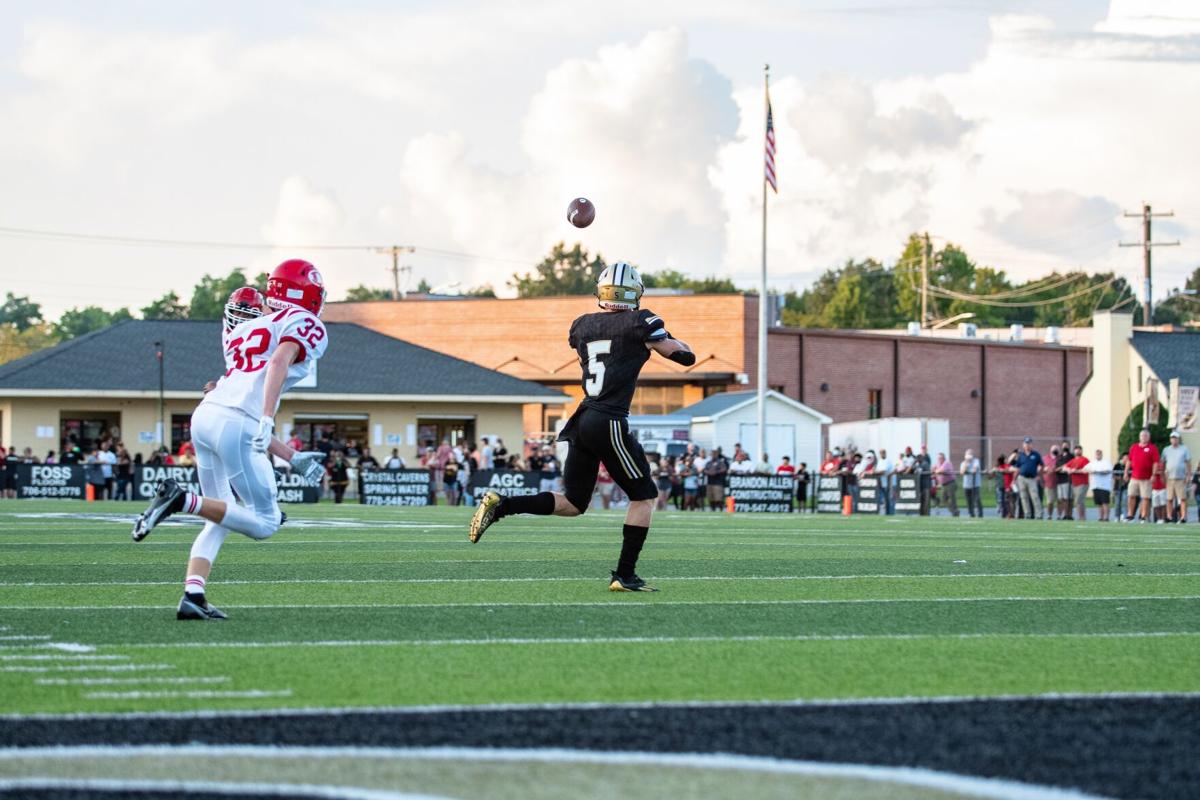 Senior wideout Cole Speer catches the first touchdown pass of the game for Calhoun in a 42-35 comeback win for the Jackets. 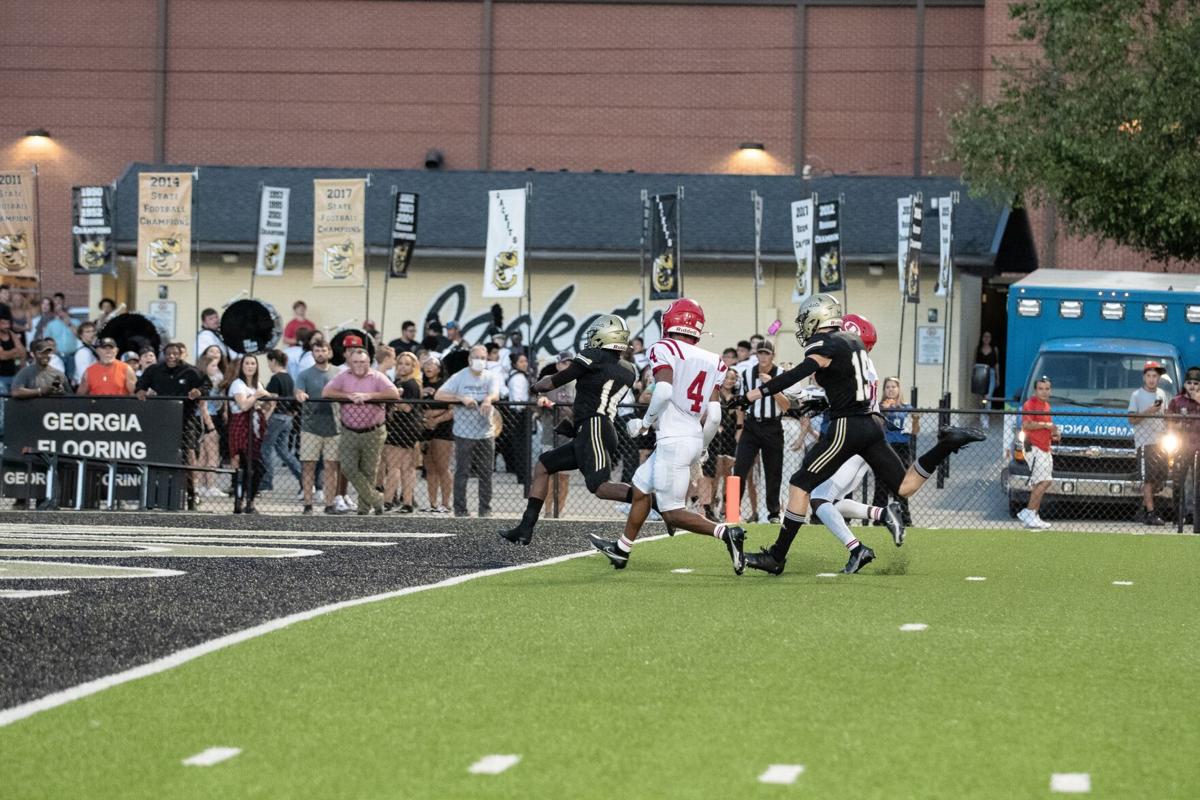 Senior Christian Lewis runs in a score for the Jackets on a pass from Christopher Lewis. 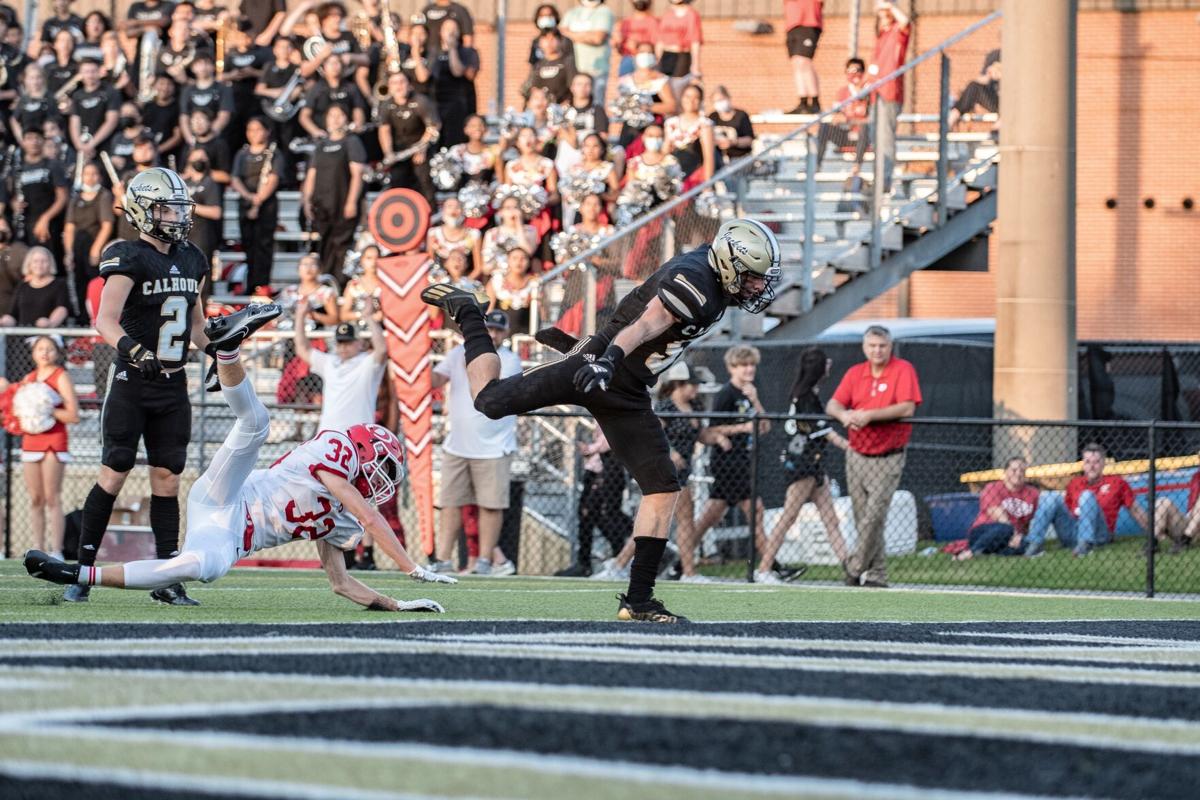 Calhoun sophomore Caden Williams runs in one of his two touchdowns on the night in a 42-35 win over Dalton.

Senior wideout Cole Speer catches the first touchdown pass of the game for Calhoun in a 42-35 comeback win for the Jackets.

Senior Christian Lewis runs in a score for the Jackets on a pass from Christopher Lewis.

It was a typical opening night of high school football in Georgia for Calhoun and Dalton when they clashed Friday night at Phil Reeves Stadium at Hal Lamb Field.

There were a lot of penalties. There were a few turnovers. And there was many big plays, both bad and good for both teams.

But in the end, Calhoun used a strong running game along with resiliency and perseverance to hold off the pesky Catamounts, 42-35, in both teams’ season opener.

“It was a pretty wild game,” Calhoun head football coach Clay Stephenson. “We were fortunate enough to make enough plays in the second half to get the job done. But I knew Dalton would come in here and give us everything we wanted and that’s exactly what happened.”

Meanwhile the home team matched Dalton’s first score with a Cole Speer 21-yard touchdown catch from quarterback Chris Lewis to tie the game at 7 with 2:23 to play in the first period after the first of six extra-point kicks by senior Carlos Orozco.

Dalton took the lead back when on a punt, Calhoun fumbled it twice and the second time, the Catamounts recovered. Moments later, senior quarterback Brady Pendley capped off an 8-play, 47-yard drive with a 15-yard touchdown pass to senior wide receiver Luke Blanchard and the Catamounts went up 14-7.

The hosts would tie it midway through the second quarter on a Lewis 35-yard touchdown run, but Calhoun scored again before halftime on a Pendley one-yard throw to Journey Boston, putting the visitors in charge, 21-14, at the break.

The home team finally gave themselves a little breathing room by scoring 21 points in the third period with running backs Gage Leonard and Caden Williams began to run free.

Williams started the touchdown spree with a 37-yard touchdown run thru traffic to tie the game and on their next possession, Leonard broke off a 53-yard run that put them inside the Cat 10-yard-line. Two plays later, he went in from three yards out and Calhoun had the lead for good.

They would extend that advantage to two touchdowns when Dustin Kerns intercepted a pass to end the red-and-white’s next drive. Taking over at their own 46, they needed 12 plays and converted two fourth downs to keep things moving before Lewis rushed for his second score of the night, putting them up 35-21.

Dalton came back with a nine-play, 72-yard scoring drive of its own to cut the deficit in half, but after a chance to tie the game came up empty, Speer picked off a tipped pass and took it back 45 yards to put the Jackets at the Dalton 24. Staying on the ground, they covered that yardage in three plays with Leonard rushing another one in, this time for one-yard out to make it 42-28.

But Dalton wasn’t done, scoring again with just under six minutes to go to make it a one-score game. But they would get no closer as the Calhoun defense turned them away two more times.

“We’ve got a lot of work to do, but there’s a lot of positives we can build on,” Stephenson said. “We did a lot of good things, but we had a lot of mistakes and other things we’ve got to clean up and we will.”

Calhoun is 1-0 on the season and will remain at home next Friday night to face Chatanooga McCallie.

Dalton stands at 0-1 and the Catamounts will have their home opener next Friday night against Ridgeland.