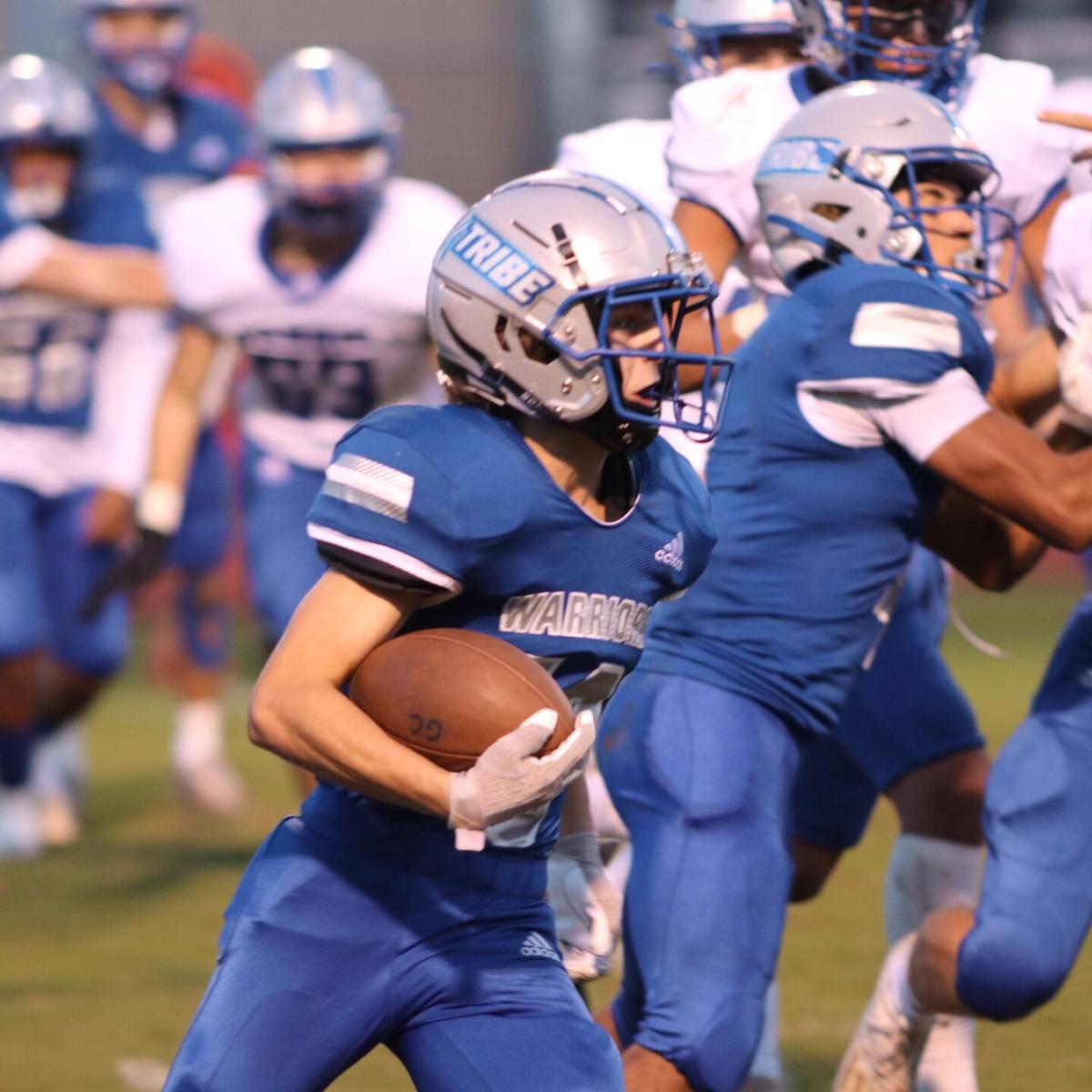 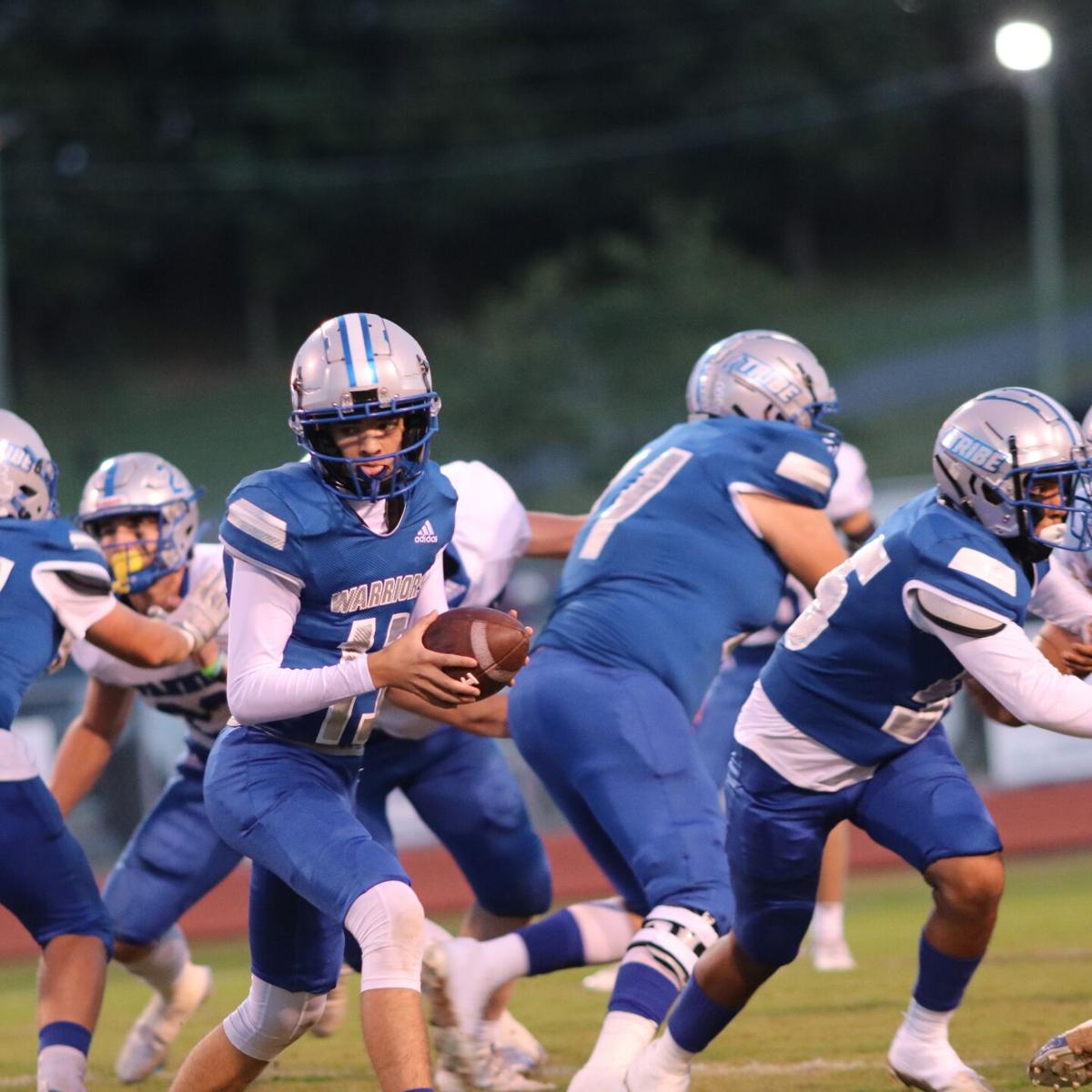 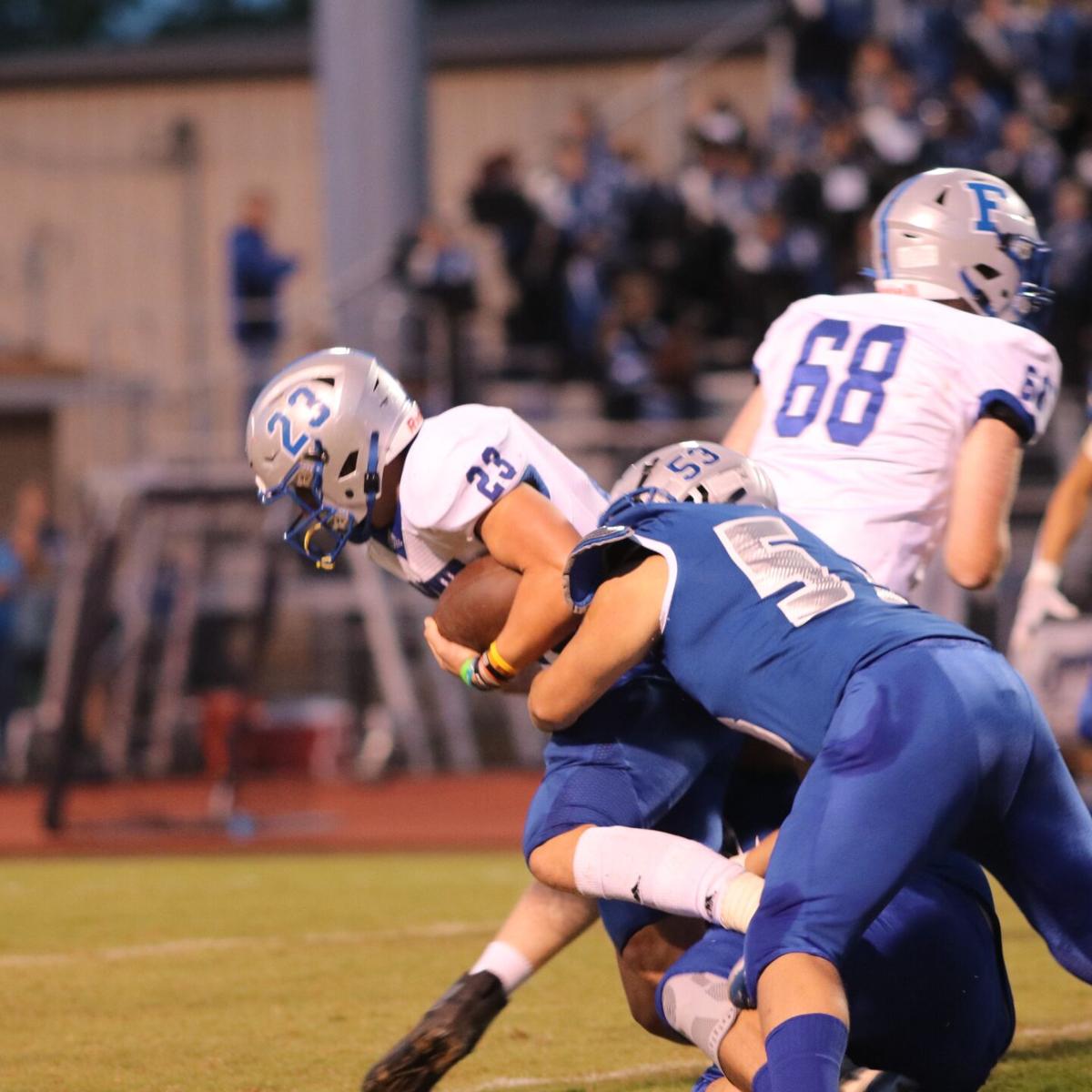 Sophomore lineman Matthew Burdette slams a Fannin County running back to the ground. 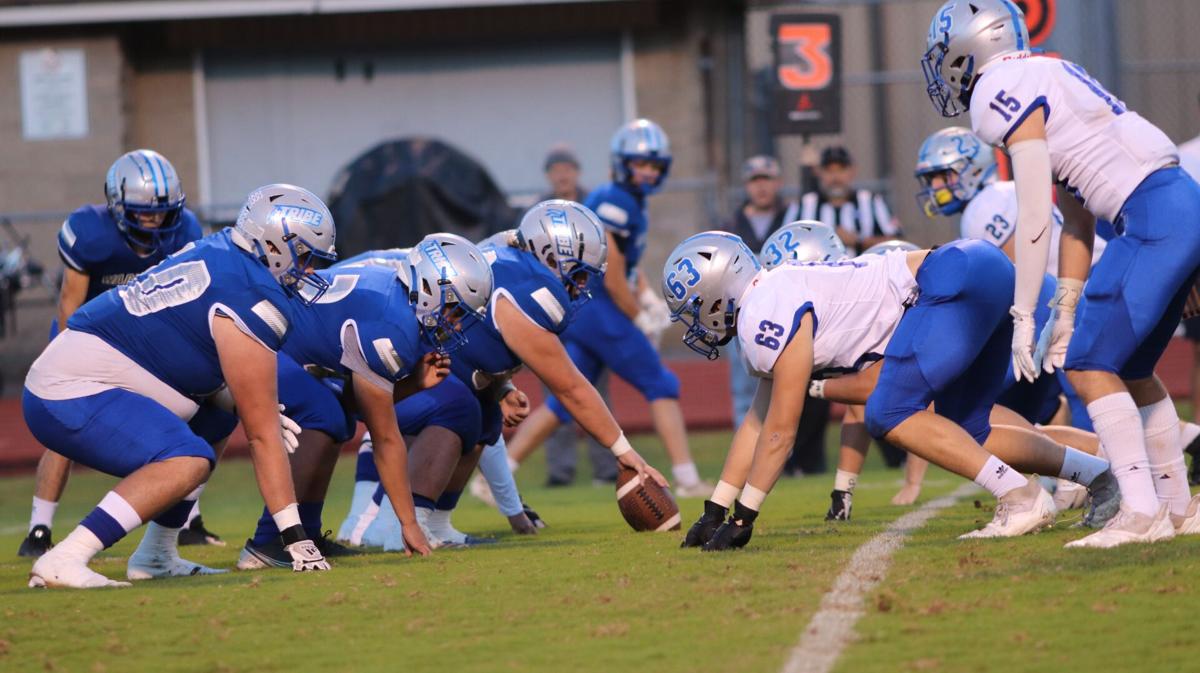 The Gordon Central offensive line gets ready to do battle during their game against Fannin County. 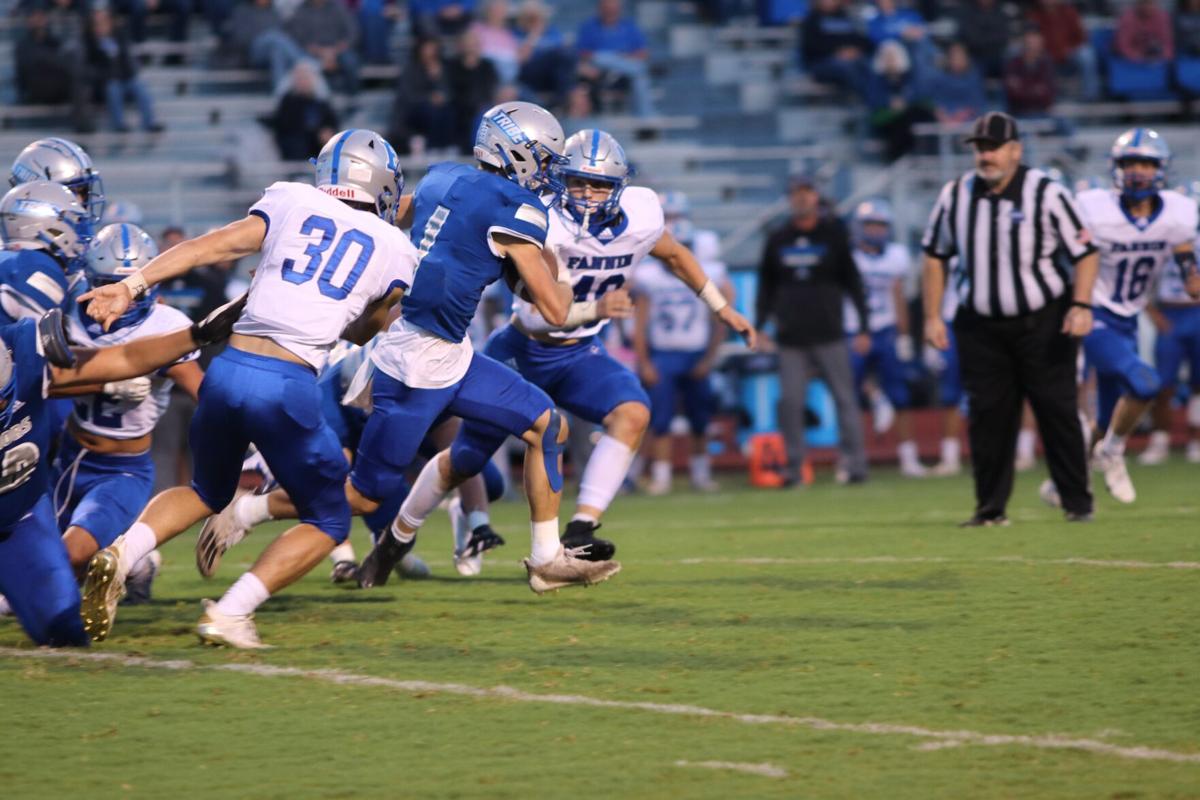 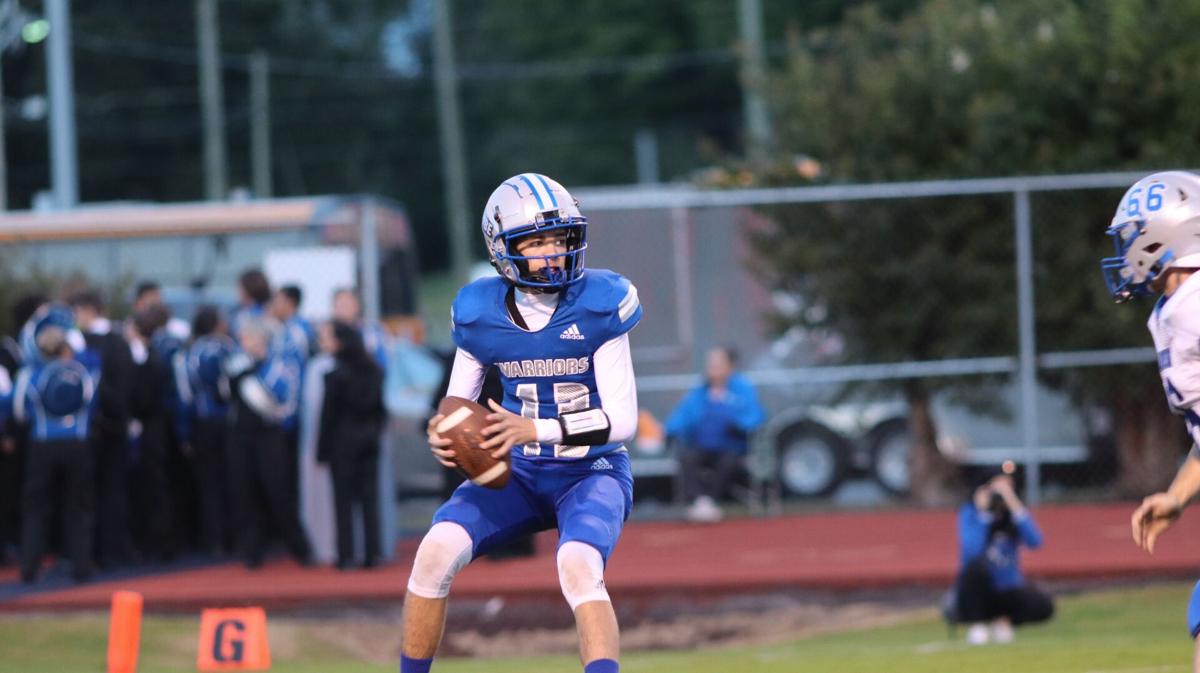 Sophomore lineman Matthew Burdette slams a Fannin County running back to the ground.

The Gordon Central offensive line gets ready to do battle during their game against Fannin County.

Fannin County took the first step towards defending its AA Region 7 championship Friday night with a 52-7 victory over Gordon Central before a good-sized crowd at Ratner Stadium.

The Rebels, who went a couple of rounds deep in the playoffs last year, found themselves in a real struggle with the Warriors for the first quarter-and-a-half, but three touchdowns right before halftime allowed them to break it open.

The Warriors looked like they were going to make a game of it after Fannin County scored on the first possession of the night, forcing a couple of turnovers and making a couple of big plays, but they could not keep things going.

After taking the opening kickoff, the Rebels needed just two plays to get inside the Gordon Central 25 and five plays to score on a short run for a 7-0 lead with over 10 minutes left in the first quarter.

Then things got interesting, the Warriors had a pass intercepted on their next ownership of the ball and the Rebels were at the GC 22. But on first down, senior Randall Carnes got the ball back with a beautiful, leaping interception of his own and the Warriors had the ball at their own 10.

With senior Brison McGinnis breaking off two 10-yard runs, Sean Gray adding another, along with a 13-yard reception from quarterback Peyton Wilson, the Rebels moved to the Fannin County 35. But an interception stopped the drive.

The Rebels then moved inside the Central 35 before they had to give it up on down with just over two minutes left in the period.

Gordon Central picked up a first down as the quarter ended but had to give the ball back on punts and the Rebels would score on three consecutive drives to close out the period.

On the first drive, the Warriors had a chance to get off the field defensively when FC had a fourth-and-three at the GC 25, but Rebel quarterback Jackson Davis ran for a first down by the nose of the football.

Two plays later, they would score on an 18-yard screen pass.

The second score of the quarter was set up a 45-yard punt return, giving them excellent field position at the Gordon Central 35.

The third came after the Warriors tried a little trickery but had a flea-flicker intercepted in the final two minutes of the half. With a 33-yard run on first down, the Rebels moved inside the home team’s 35 and five plays later, scored on an 18-yard screen pass to close out the first half.

The Rebels would score three more times in the third period, pushing the lead to 46-0 to start the fourth quarter.

The Warriors got on the scoreboard when senior running back D’Andre McIntosh, who had over 100 yards rushing, scored the team’s only touchdown on a 53-yard breakaway four minutes into the fourth period. It capped off a 7-play, 80-yard scoring drive that was aided by a pair of nice Jordan Sibley runs and a Wilson 15-yard pass to sophomore tight end Peyton Chastain.

The Rebels would add a final touchdown with under three minutes remaining to collect its fourth win in a row and improve to 5-1 on the season.

Gordon Central falls to 0-5 overall and 0-1 in the league and will be back at home next Friday night to take on Chattooga on Senior night.

Fire breaks out on container ship off Canada's Pacific coast