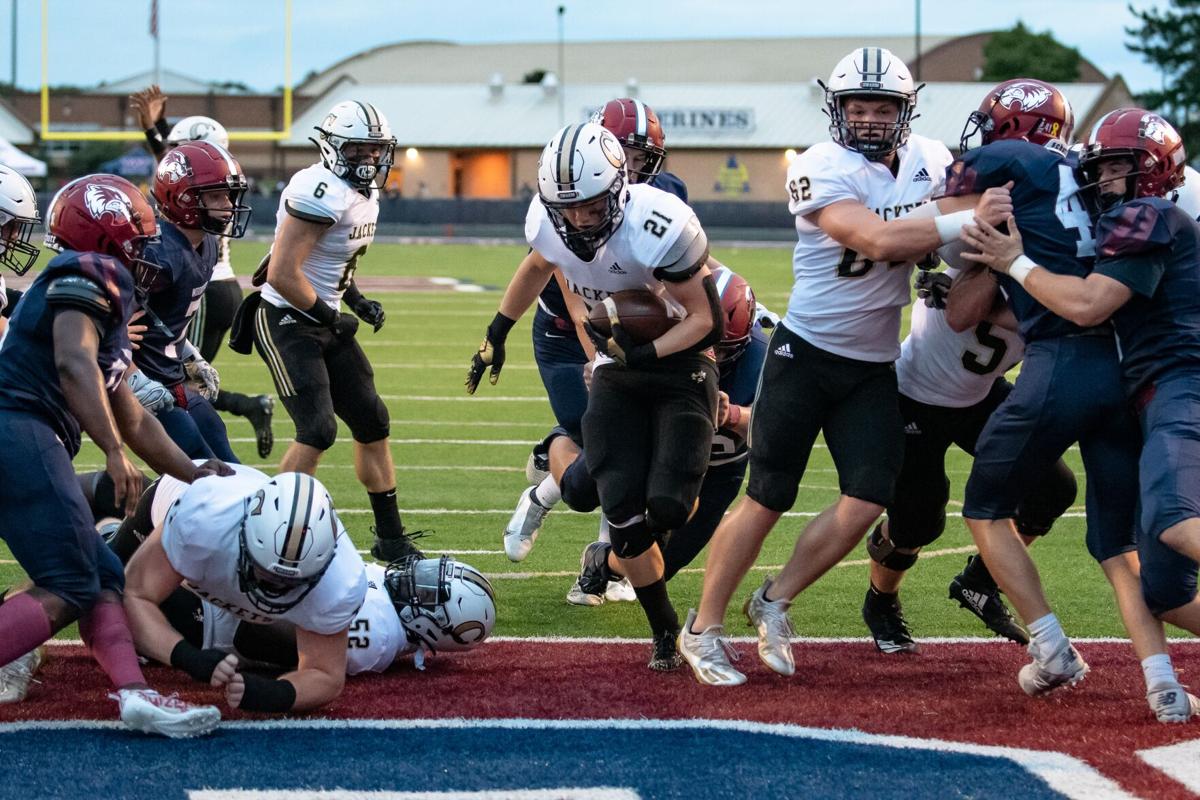 Calhoun running back Caden Williams takes it into the endzone during Calhoun’s 56-16 win over Woodstock. 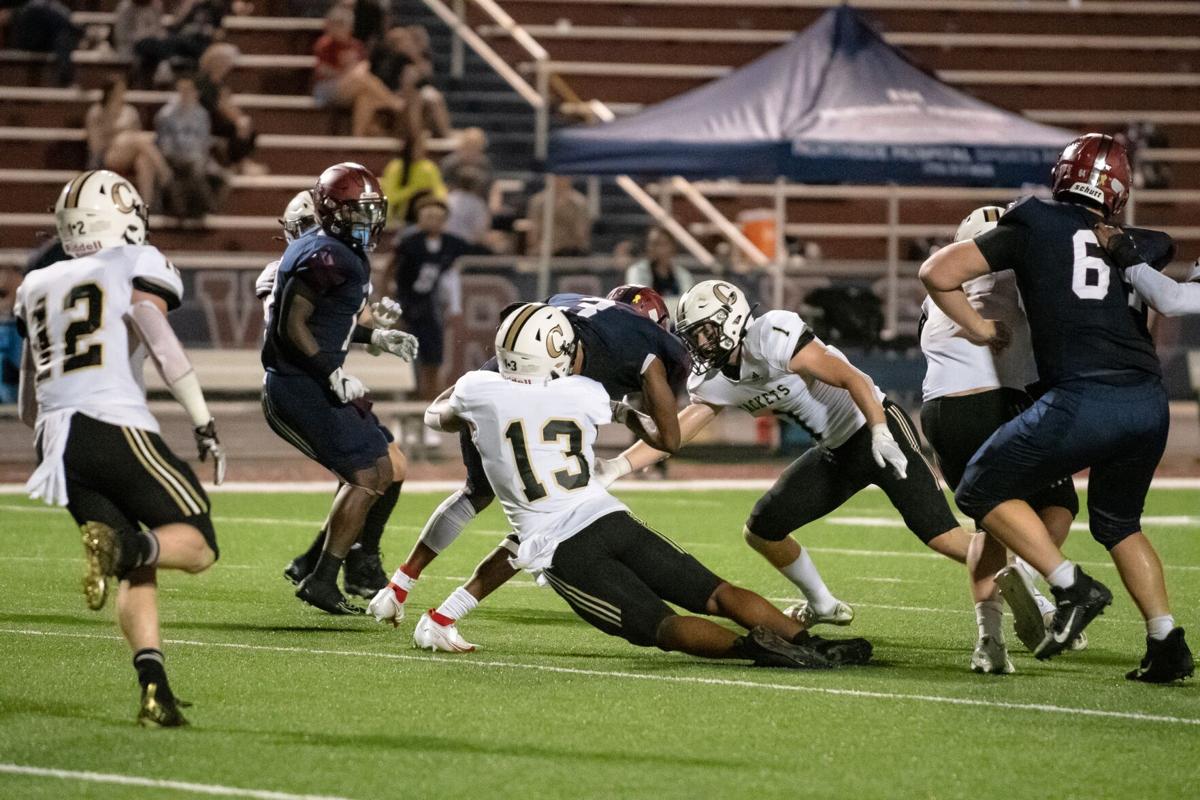 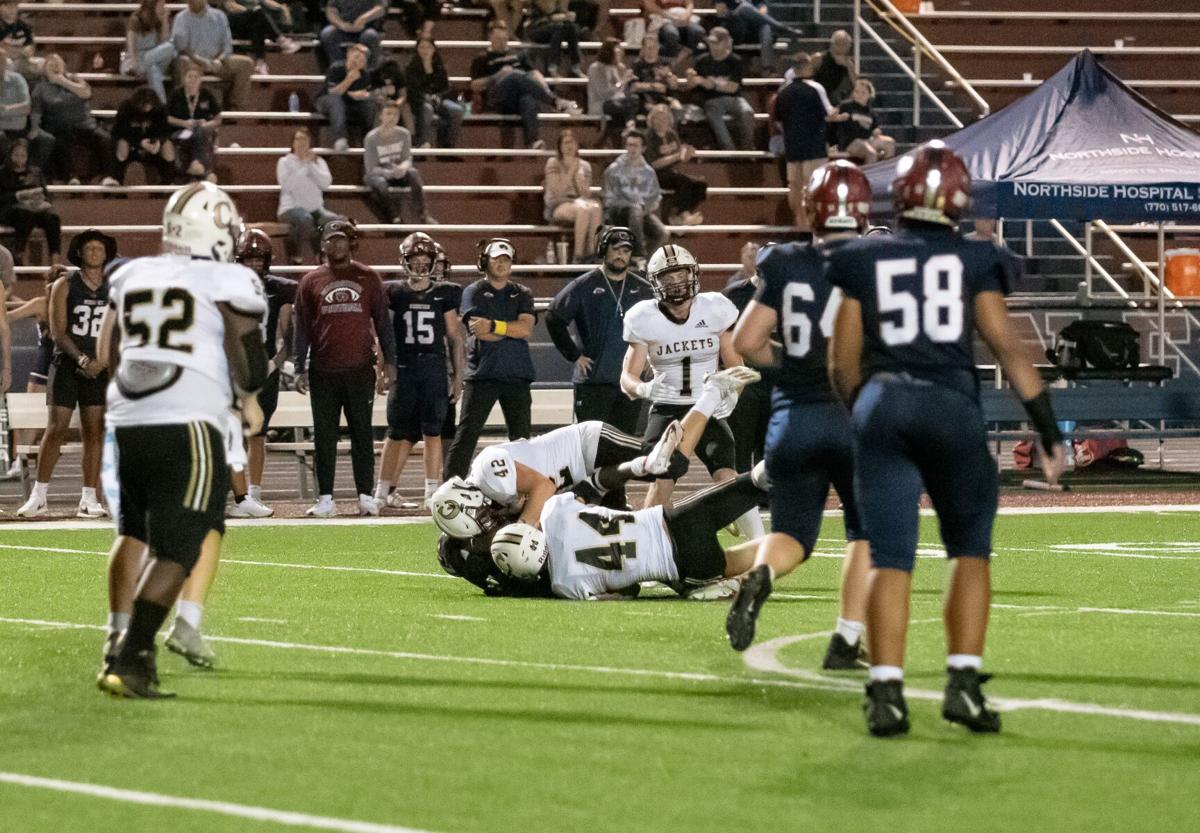 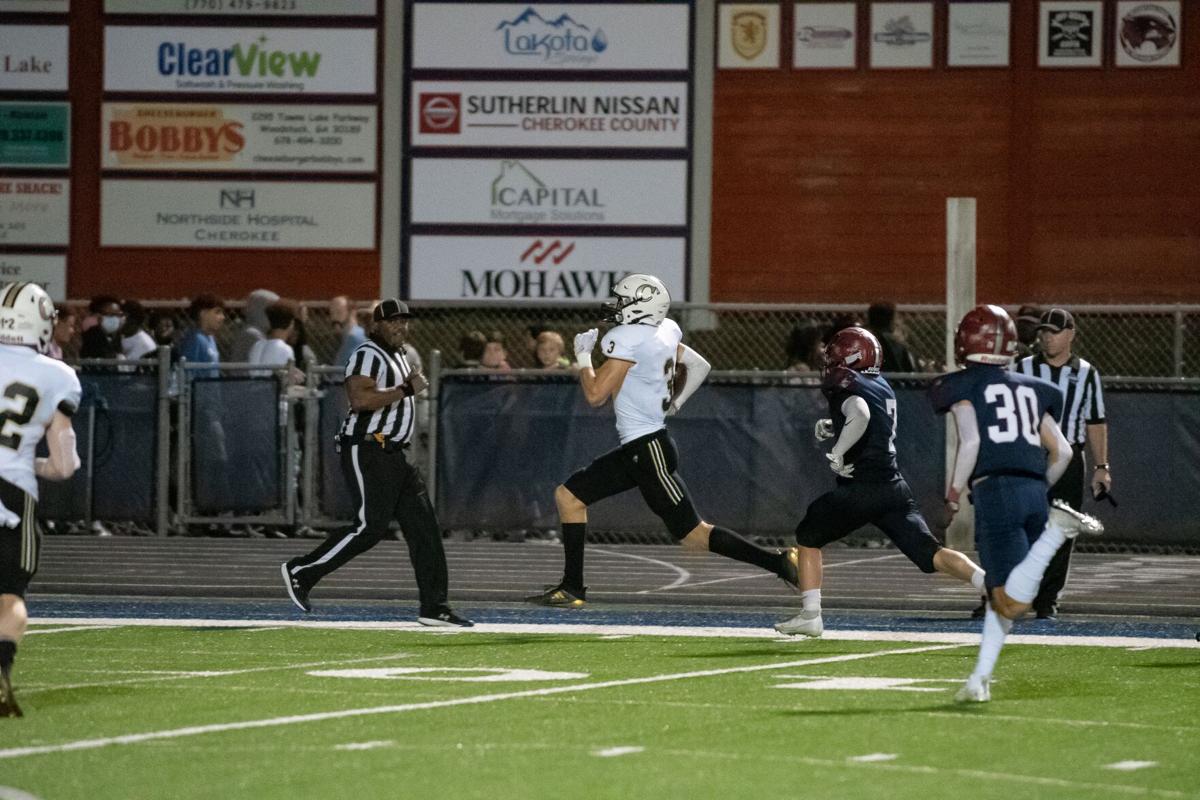 Peyton Law takes it down the sideline for a score in Calhoun’s 56-16 rout of Woodstock on the road moving the Jackets to 3-1 on the year. 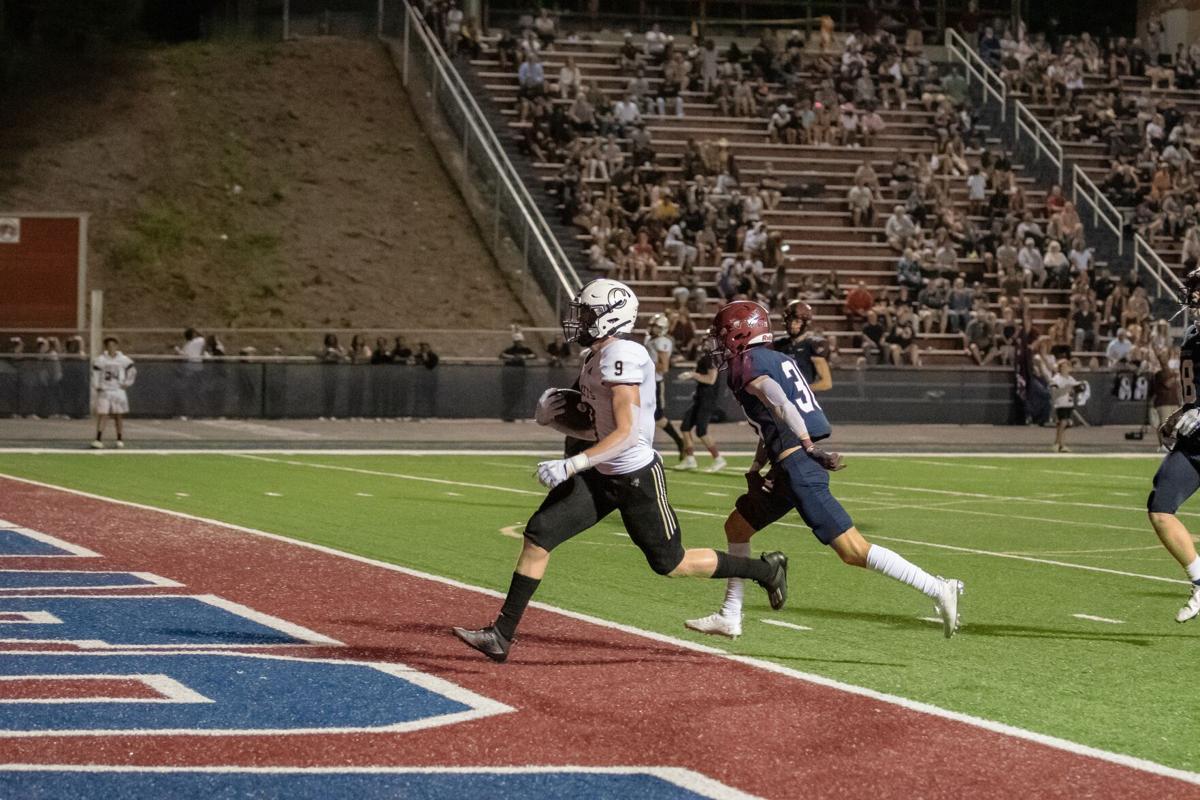 Jackets wideout Quin Smith finds paydirt versus Woodstock in a blowout road win for Calhoun over the Wolverines. 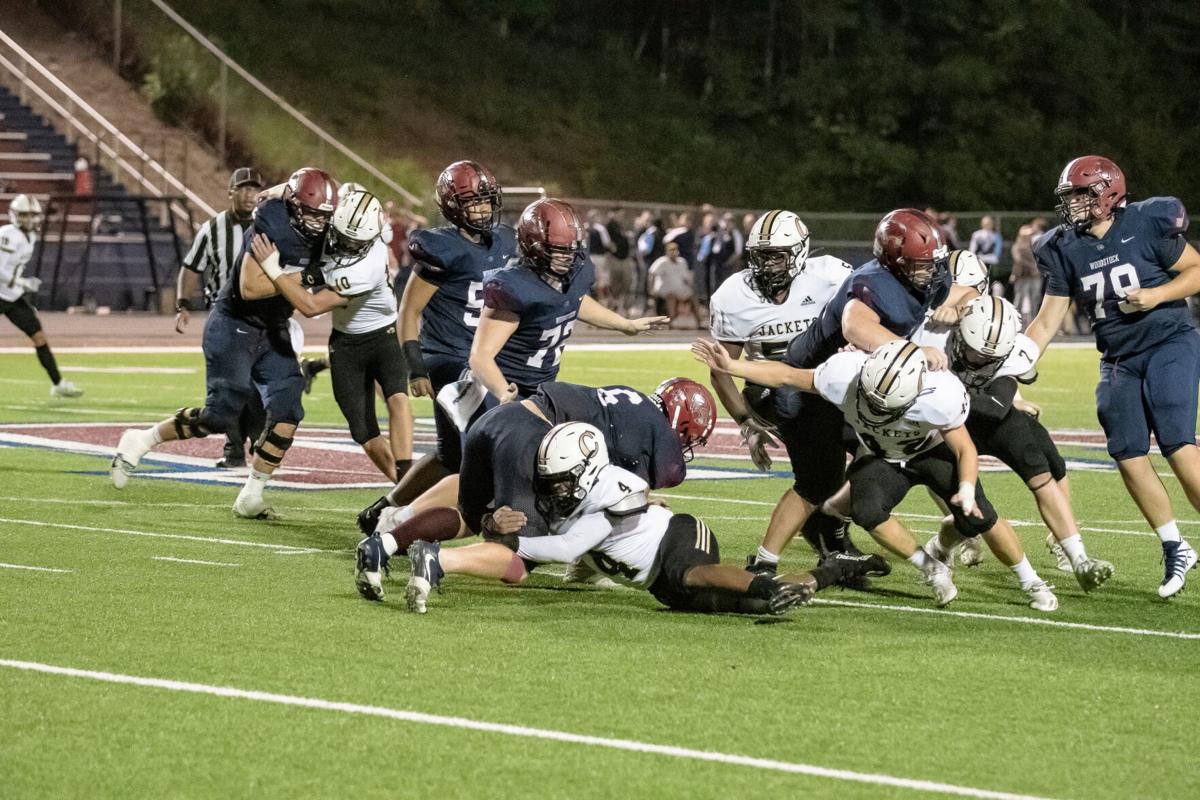 Calhoun running back Caden Williams takes it into the endzone during Calhoun’s 56-16 win over Woodstock.

Peyton Law takes it down the sideline for a score in Calhoun’s 56-16 rout of Woodstock on the road moving the Jackets to 3-1 on the year.

Jackets wideout Quin Smith finds paydirt versus Woodstock in a blowout road win for Calhoun over the Wolverines.

WOODSTOCK -- Five out of eight Calhoun touchdowns needed one or two plays in its crushing 56-16 victory over Woodstock on Friday.

There were three scoring drives that needed a single play for the Yellow Jackets. Calhoun ended the first half running 20 plays.

After a Woodstock punt was dropped before the ball was kicked off, Calhoun (3-1) was placed one yard from its goal, and with the first play, Christian Lewis rushed into the end zone to up the score. Caden Williams would score the first touchdown with a 1-yard rush, and the Yellow Jackets would close out the first quarter, 12-0.

In the second quarter, A personal foul from the Wolverines would draw the Yellow Jackets to the 50 yard line. Peyton Law would score on a pass from Lewis. In Calhoun’s second possession, Quin Smith ran for 34 yards on the Yellow Jacket’s second play. Cole Speer would run for 78 yards on the first drive in Calhoun’s following possession and on a single play. A 61-yard rushing touchdown from Carney, and a 52-yard rushing touchdown from Gage Leonard would complete the scoring for the Yellow Jackets with a 56-9 lead at the end of the first half.

“There was a lot of quick strikes on offense,” Calhoun’s Clay Stephenson said. “We spread it around, five people got touchdowns, so it leaves a good night.”

This is Calhoun’s second game back due to two games being canceled.

“It was tough,” Stephenson said when asked about the long break. “We got canceled because of covid which threw us off and we got a short week this week. We’re playing on Thursday night, so it’s a crazy year, but we’ll play football whenever.”

Woodstock (0-5) would keep Calhoun scoreless for the last half of the game, coming out with one touchdown of their own in the third quarter with a 1-yard rush from Preston Lawrence.

Kristian Colina completed a 30-yard field goal late in the first quarter to put the Wolverines on the board with a 14-3 score with 6 minutes left in the opening period.

With six plays heading into the second quarter, the Wolverines scored their sole touchdown of the game with a single rush touchdown from Preston Lawrence.

“You want to come out and win every game, but under certain situations, it’s going to help us move forward.”

Woodstock will look to take a break next Friday, and begin region play in October, while Calhoun plays Cedartown in a makeup game Thursday night at Hal Lamb Field.

Sun-Star's best prep football poll: Vote for the Prep of the Week for Week 10

Warriors wake up late against winless Thunder to stay unbeaten