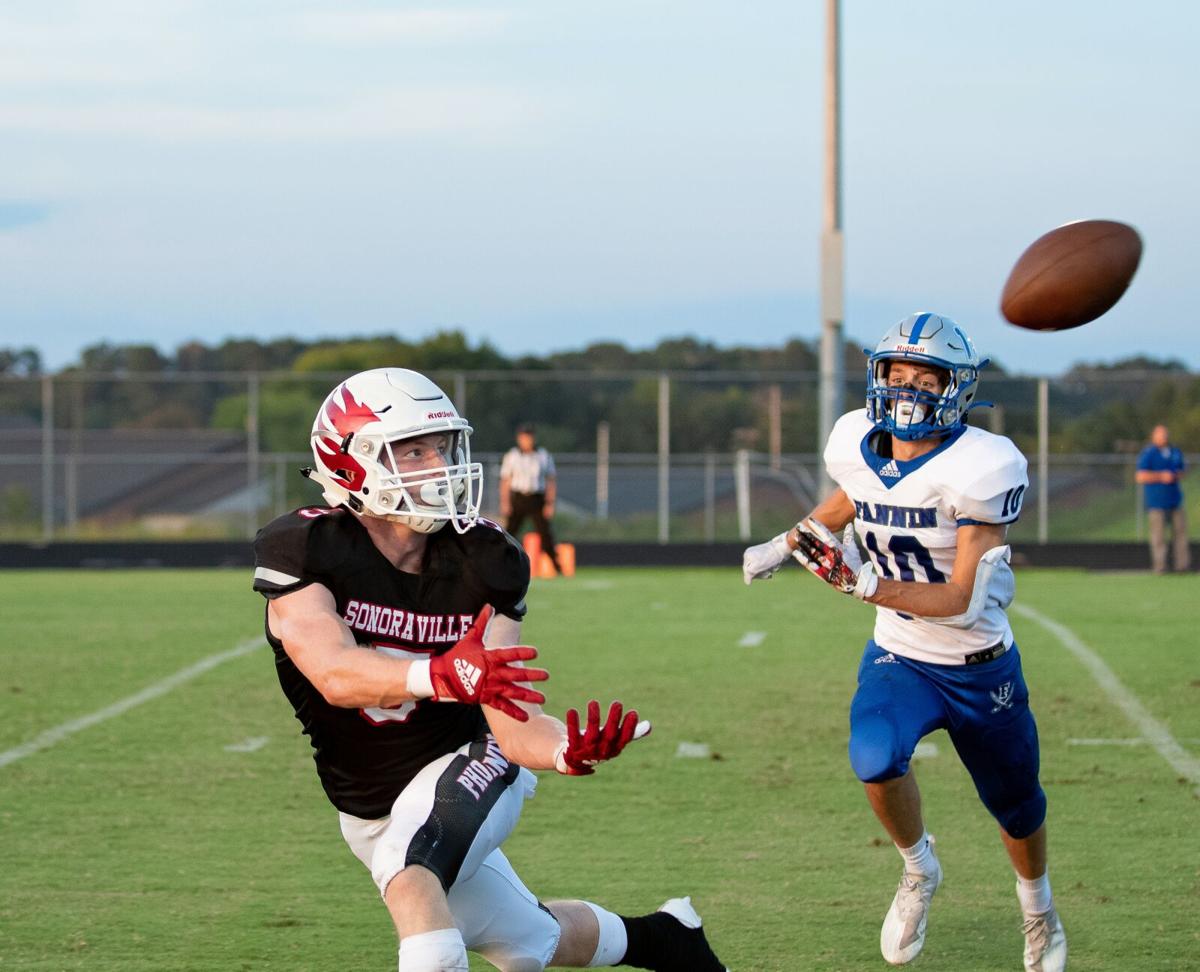 Receiver Brant Bryant makes a diving catch, setting up Sonoraville’s first touchdown of the night versus Fannin County in a 32-0 victory. 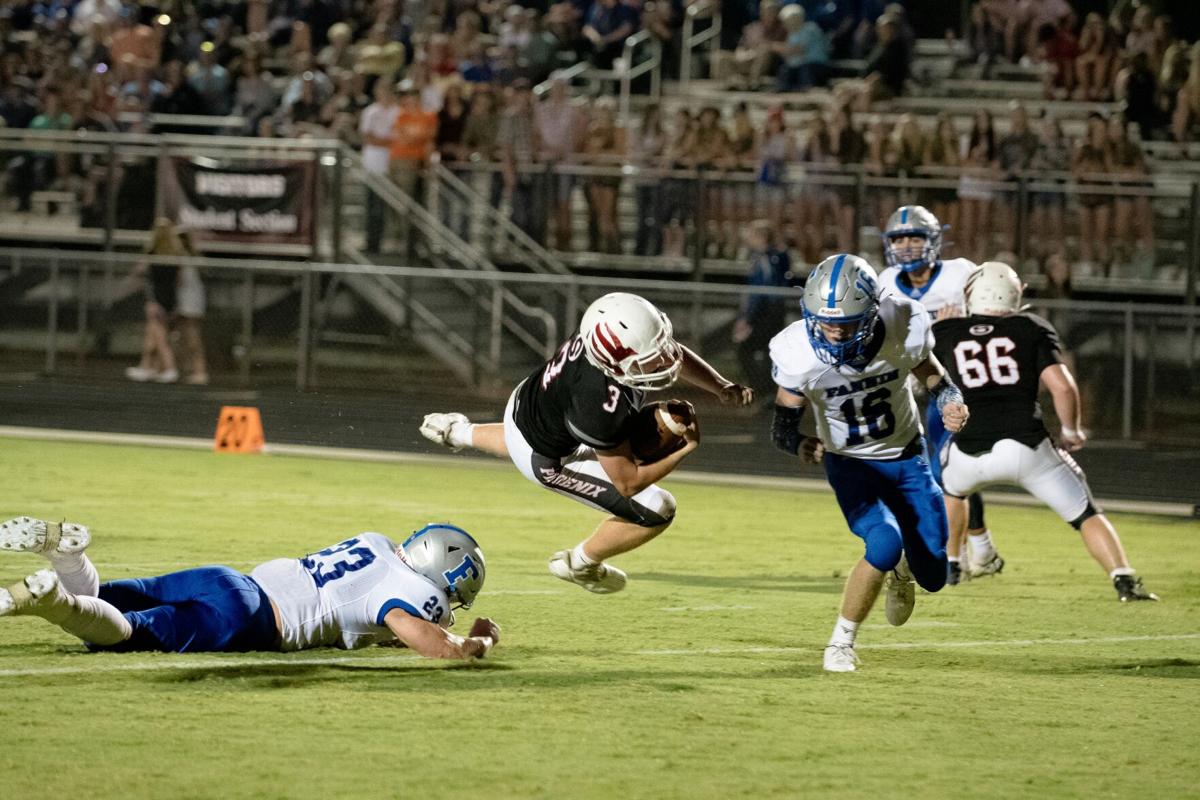 Sonoraville junior Wyatt Springfield runs the ball for the Phoenix in a 32-0 win over Fannin County. 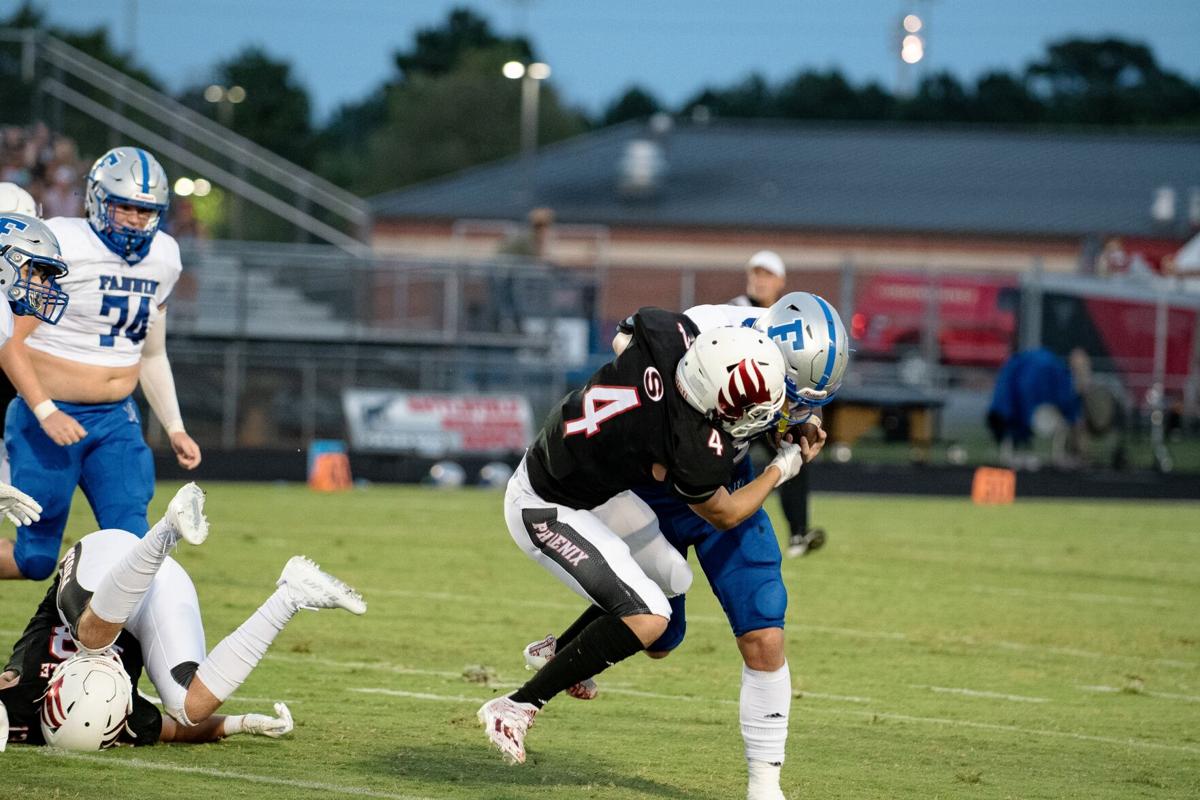 Sonoraville junior Nicholas Beddington brings down a Fannin County runner in a 32-0 shutout win over the Rebels at The Furnace.

Receiver Brant Bryant makes a diving catch, setting up Sonoraville’s first touchdown of the night versus Fannin County in a 32-0 victory.

Sonoraville junior Wyatt Springfield runs the ball for the Phoenix in a 32-0 win over Fannin County.

Sonoraville junior Nicholas Beddington brings down a Fannin County runner in a 32-0 shutout win over the Rebels at The Furnace.

Scoring 26 points in the second half while the defense pitched another shutout, Sonoraville rolled past Fannin County 32-0 Friday night at The Furnace.

The Phoenix, now 2-0, led just 6-0 at halftime, but got things cranked up in the second half, scoring 12 points in the third and 14 more in the fourth to win going away.

For the second straight game, the defense tossed a shutout as they have not been scored on now all season.

“The defense did a great job,” Pate said. “I thought we flew around. Anytime you can keep a quality team like Fannin County out of the end zone, you’ve got to be pleased. I thought we had a lot of guys making plays on that side of the ball, which is what you want to see so my hat goes off to the job Coach Walraven and the defensive staff for coming up with a great game plan. We will gladly take a shutout anytime against anybody.”

The Phoenix scored the first touchdown of the night on their second possession. After moving inside the five on their first drive, they fumbled and the visitors recovered. But they couldn’t do anything with it and had to punt from their own end zone.

Starting out at the Rebels 48, the Phoenix picked up two first downs and then sophomore quarterback Jaxon Pate found a diving Brant Bryant for a 27-yard reception to the one. On the next play, Pate powered his way for a 6-0 lead with 4:30 left in the first quarter.

It remained a one-score game until the home team went on a 14-play, 90-yard scoring drive on its first drive of the third period. Junior Wyatt Springfield completed the long march, which was aided by a couple of FC penalties, with an eight-yard touchdown run with 4:30 left in the third.

Sonoraville’s next touchdown came after Nicholas Beddington intercepted a pass and returned it 43 yards to put the Phoenix inside the FC 15. Two plays later, Pate went around the left side for a 14-yard touchdown run to make it 18-0 with 93 seconds left in the period. This time the hosts went for two but didn’t get it.

They would add two more scores in the fourth quarter.

The first came on another long drive, this one was a 13-play, 76-yard drive that Pate finished with a 19-yard touchdown pass to junior running back Zach Lyles. On the drive, Sonoraville had four false start penalties and had to convert a fourth-and-one but did to push the score to 25-0 when Bryant made the extra point.

The last score came after Springfield picked off a pass and returned it into FC territory. Five plays later, Pate threw a 15-yard touchdown pass to fellow sophomore Hayden Ross with just over a minute left on the clock.

Bryant added his second point-after kick of the night to complete the scoring.

The Phoenix are now 2-0 and will be off next week before opening up Region play a week from Friday back at The Furnace against defending region champion Rockmart.