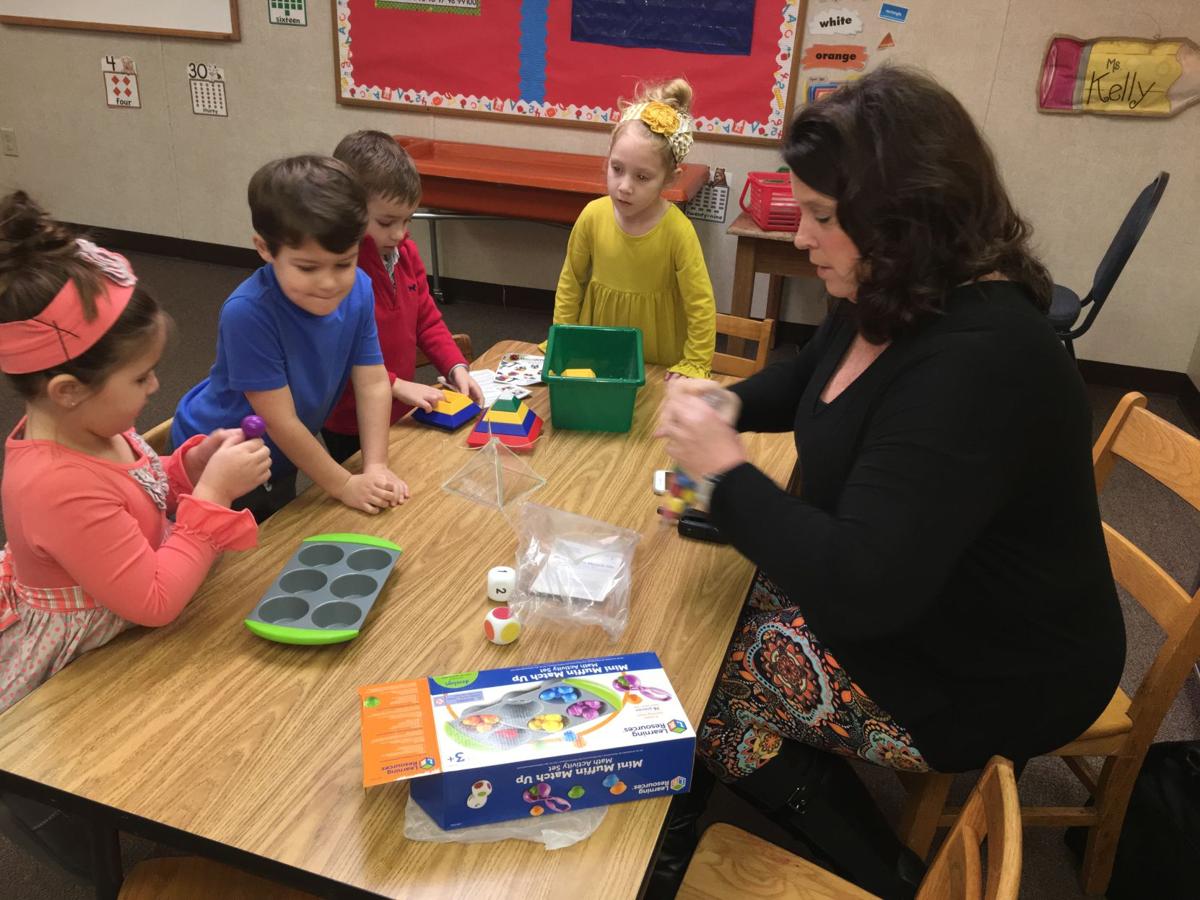 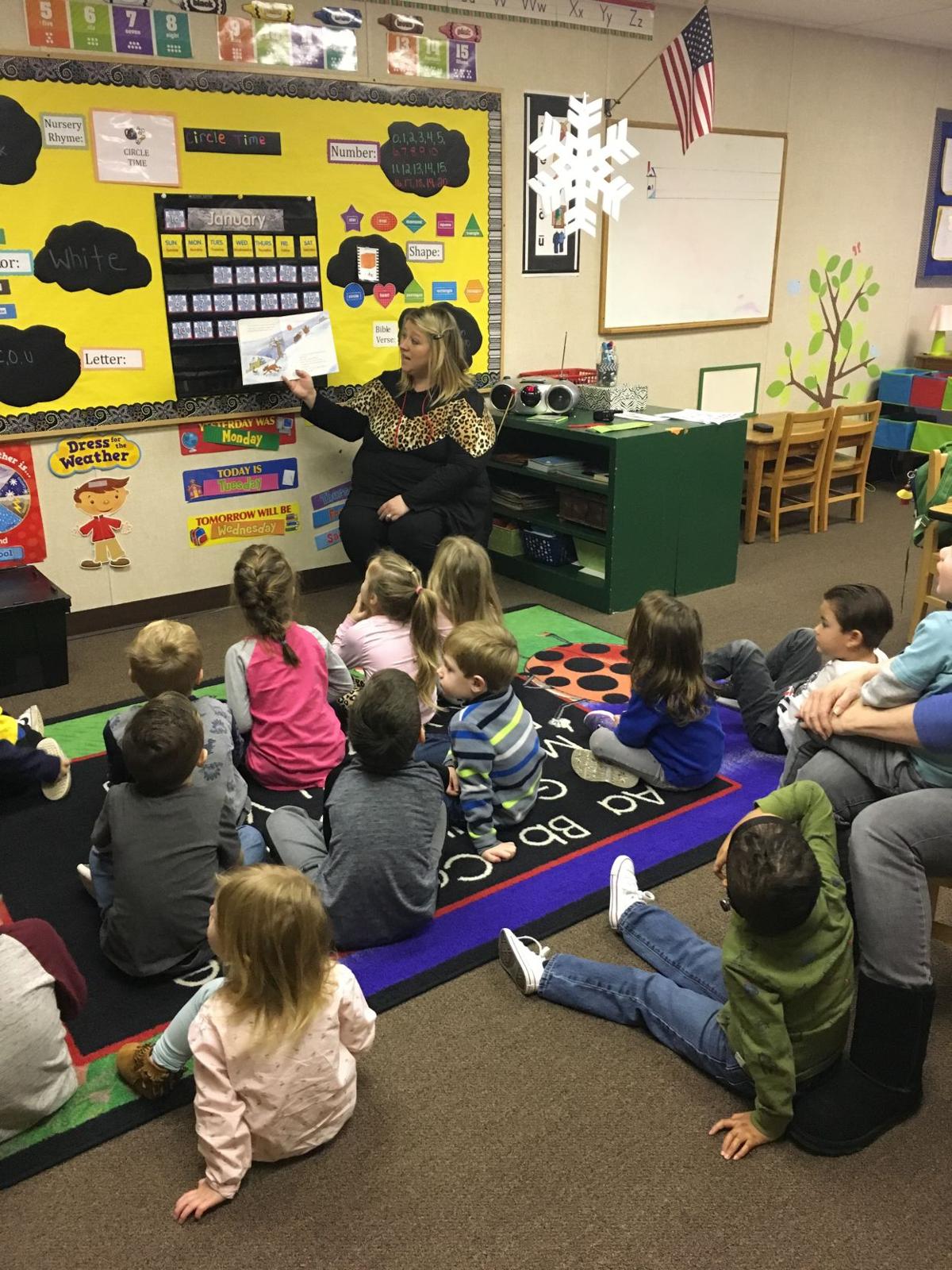 Amy Richards reads to her class of 4-year-olds at Anne Jones Memorial Preschool in Calhoun. Richards has been a teacher at the school for seven years. / Liz Crumbly 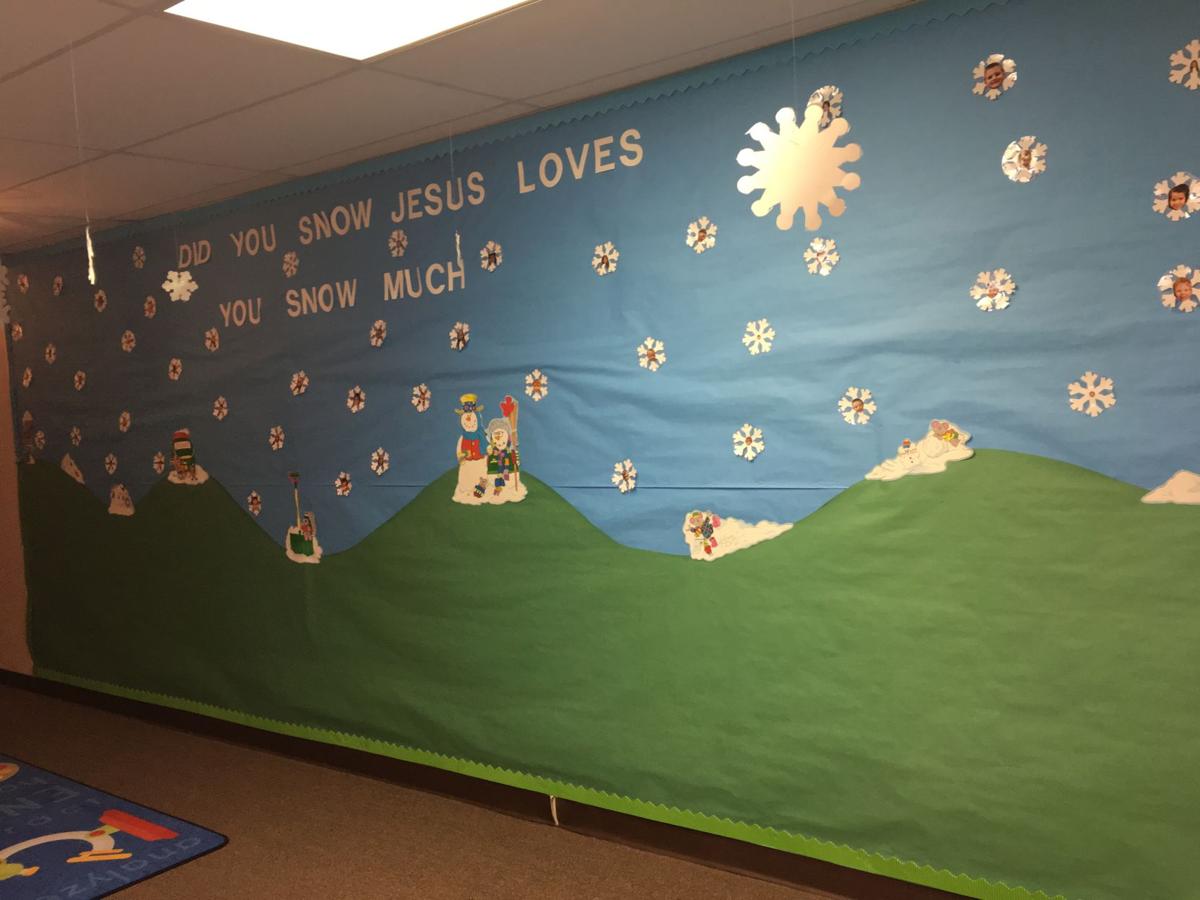 Amy Richards reads to her class of 4-year-olds at Anne Jones Memorial Preschool in Calhoun. Richards has been a teacher at the school for seven years. / Liz Crumbly

You’ll be pretty hard-pressed to get Kelly Brittain to talk a lot about herself. When she discusses her role as director of the Anne Jones Memorial Preschool at Calhoun First Baptist Church, she inevitably turns the conversation back to her teachers and students, for whom she has a fountain of praise.

Brittain took over the director’s role at the beginning of the 2017-2018 school year after former director Vickie Warren retired, and she’s kept many of the traditions Warren put in place. Classroom activities still revolve around socialization and play with low-tech toys. Brittain calls the lessons “very hands on” with an emphasis on fine motor skills.

Although it’s not a state-recognized pre-K site, the school still places an emphasis on having its 4-year-olds ready for public school by the end of the year, just as it has for decades.

“When they transition into Kindergarten, we want them to be ready,” Brittain says.

She’s added a slew of significant new features of her own in the past year and a half, however.

The 3- and 4-year-old classes at the half-day preschool now participate in a math and science lab several times per week, and there are Spanish lessons once a week. The school now partners with parents and area retired educators to read during students’ weekly visits to the library.

Brittain piloted a drive-thru chili fundraiser at the school her first year. It brought in several thousand dollars. Word spread, and orders poured in for the second event this past fall, and the school actually ran out of chili before it could fulfill all its orders.

The result of these efforts is obvious in the school’s enrollment numbers, which have more than doubled from the mid-70s in 2017 to 154 in early 2019.

When pressed for a reason for the jump, Brittain can’t really pin one down. She’s consistently thoughtful in her answers, though, and after some obvious reflection, she simply says, “It’s God.”

Indeed, she’s kept an emphasis on the spiritual aspect of the early childhood education experience here. Students attend a chapel service once a week with one of the church leaders, and artwork throughout the school consistently reflects a focus on faith.

Brittain says her team has been a large part of the reason the new efforts have succeeded.

Her 15 teachers, she says, are “willing to help with whatever. They’re hands-on first for these kids. The love from them, it’s just amazing to see. They just run with it.”

She also credits her students’ parents with helping the school flourish by being involved. They volunteer in classrooms, which has “been a huge help this year,” she says.

They also line the streets around the church for the Halloween parade, which has replaced the school’s annual spring parade.

The director’s position seems to be a natural fit for Brittain, a Calhoun native. She is the daughter of Yvonne Fuquea, a homemaker and Georgia Tufters employee, and Kenneth Fuquea, who made his career in retail.

Kelly began working with little ones at St. Mark’s Preschool in Dalton when her son, Turner, reached preschool age. She taught there for three years, but when Turner began Kindergarten, she came to Anne Jones so she could get him to school in Calhoun.

“I wanted him to be around his school friends,” she says.

The move worked well for her, too, and she taught at Anne Jones for three years, but she felt a pull to return to St. Mark’s. She ended up back there for the next 14 years, working with a diverse group of young students that included special needs children.

When the director’s position at AJM became available, Kelly took a leap of faith in leaving the school she loved so much. Her husband, David, of 23 years is a Southeastern Freight Lines driver, and he was supportive and excited as she made the transition. It’s been a long time since Brittain spent her first days in the classroom at St. Mark’s. Turner has made his way through the Calhoun city school system. He’s now 20 and a sophomore at Dalton State College where he’s studying respiratory therapy. Kelly now has two decades of experience teaching small children to recognize letters and numbers and begin socializing in a healthy way, and AJM has benefitted from her training and expertise.

She’s been able to implement a lot of the practices and concepts here that she picked up at St. Mark’s. One change has been the addition of an aftercare program. The school day only extends until noon, and some parents need a little extra time, so Kelly added an extra hour for children ages 2, 3 and 4 whose parents request it. These students bring a lunch and spend time reviewing their schoolwork, eating and playing.

The school still offers a variety of attendance options for its two- and three-year-olds as it has for many years. Parents can choose between two, three or five days for their little ones, while 4-year-olds attend school five days per week.

Although her responsibilities now include staff supervision and introduction of new programs, Kelly was adamant when she took the job that she be able to continue with her first love of teaching. She runs the math and science lab now, spending a few hours each day with the 3- and 4-year-olds.

In keeping with her overall approach in interacting with preschoolers, she’s kept the activities “all hands-on.” Her dedication is evident in her interaction with her students. Four of them clustered around a table with her on a recent winter morning. She asked them questions about their favorite math and science activities and invited them to play a game of Mini Muffin Match-up.

The students recapped their favorite lab activities: making slime, doing crafts and making ice cream. One little girl summed up her experience in the classroom succinctly and in a way it seems any teacher would be satisfied with: “I like to learn — I love to learn!”

According to Calhoun First Baptist Church Secretary Betty Vaughan, Anne Jones Memorial Preschool at First Baptist began about 55 years ago at the church’s old location on Wall Street where the Regions Bank building is now.

The church moved to its current location on College Street around 1975, and the preschool went with it.

A handful of women in the church began the school, Vaughan says, in response to a perceived need. The school’s first director, Ramona Reese, now 89, still attends First Baptist. The church renamed the school Anne Jones Memorial Preschool after its namesake, a much-beloved director, passed away from cancer in May of 2001.

The school, Vaughan says, has a longstanding reputation in the community as a good place for small children to begin their educational journeys.

“Now, we’re seeing children that are three and four generations (of families) that have attended here. It’s always been well-received. We get good remarks from everybody who’s been here,” she says.

With new variant, masks are back

Review: Darkly comic 'The Suicide Squad' is a superhero splatterfest

US women's soccer takes bronze, but there's 'some soul-searching' ahead

‘Nine Days’ review: This moving, bittersweet fable is about souls waiting to be born, the audition of a lifetime

Television Q&A: Will there still be a final season of 'Grace and Frankie'?