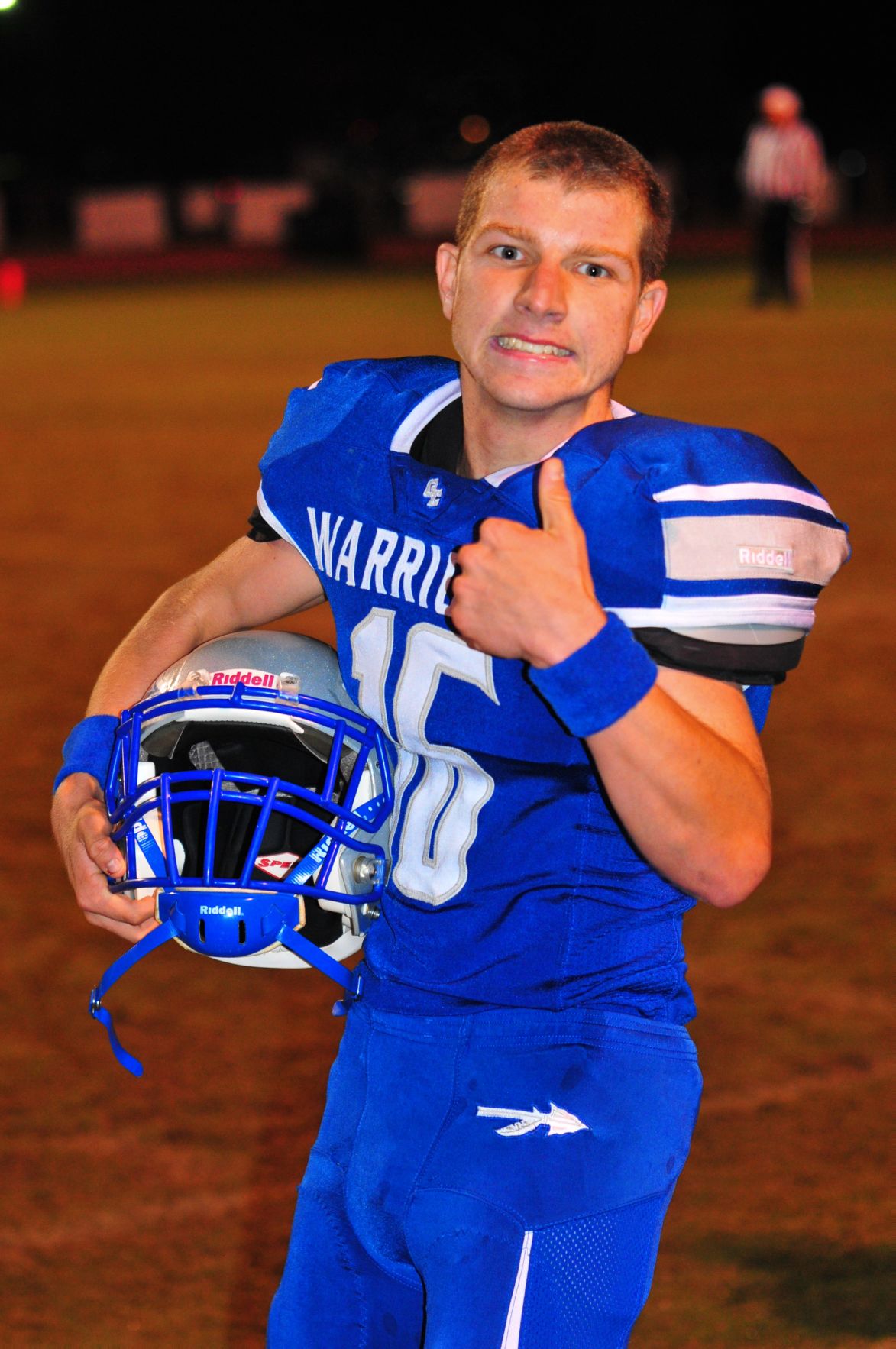 Gordon Central senior Jesse Walters smiles in full pads and uniform during the Warriors' football game against the Rockmart Yellow Jackets on Friday, Nov. 1. Walters scored the team's only points of the night on a 75-yard touchdown run. 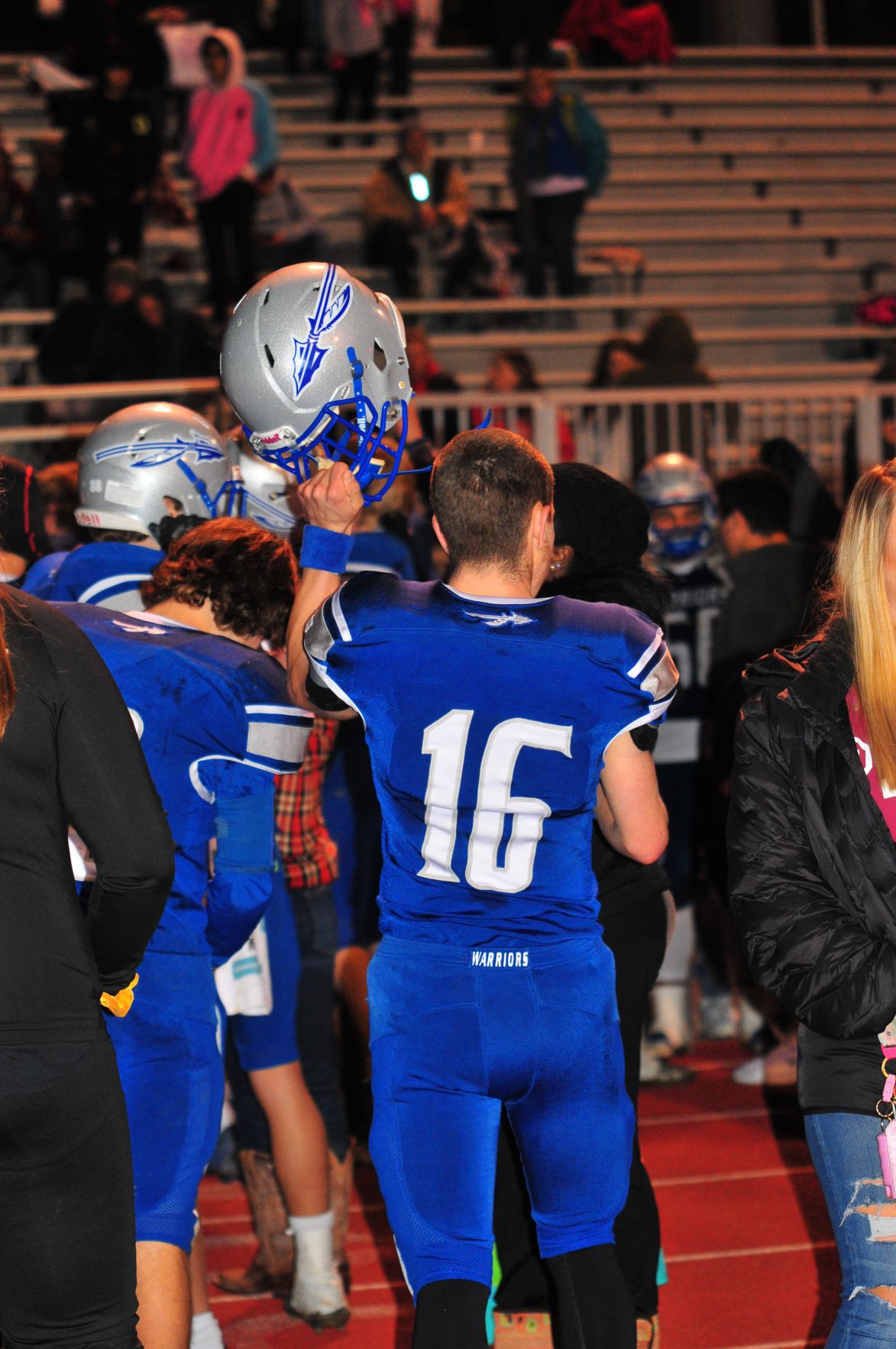 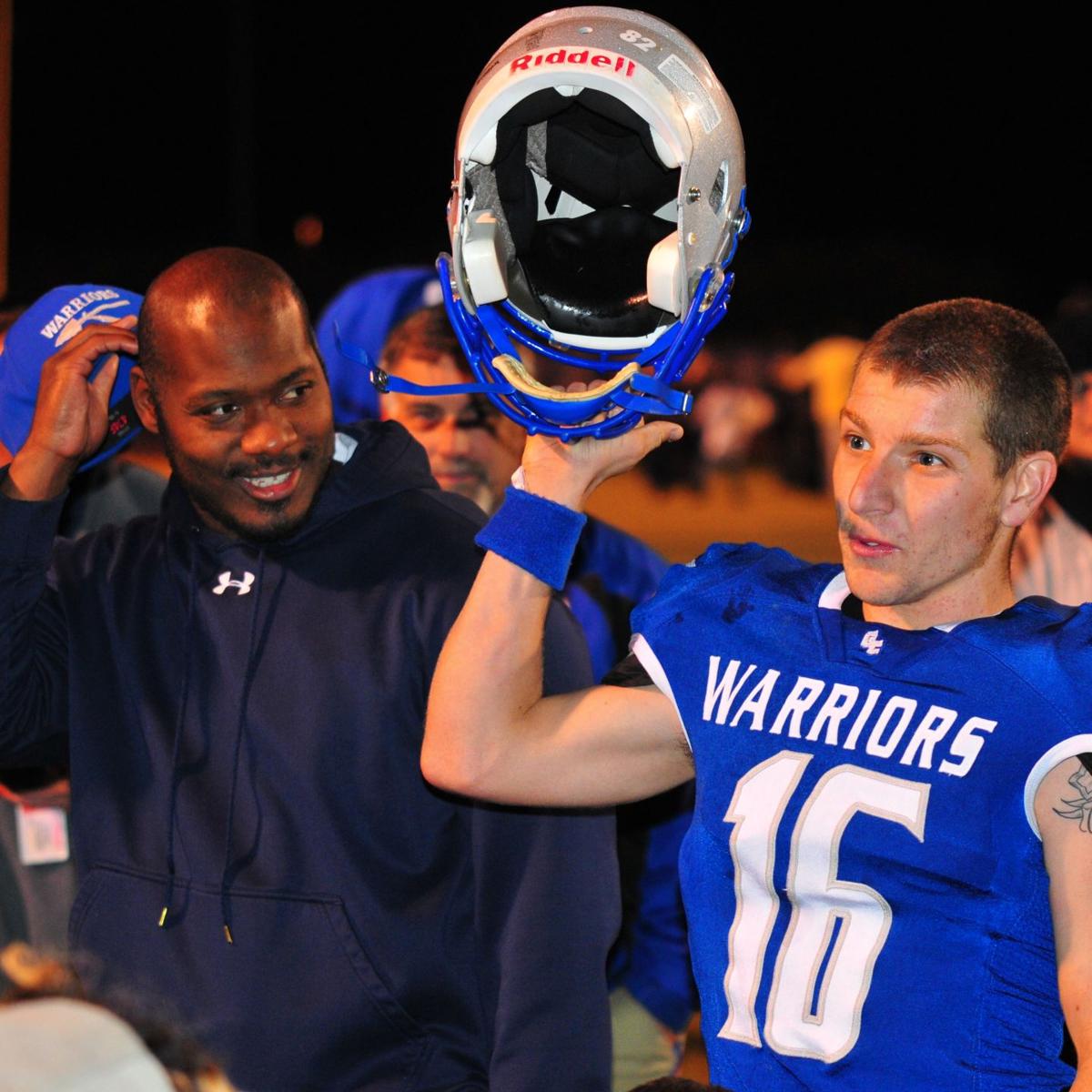 Gordon Central senior Jesse Walters raises his helmet while head coach T.J. Hamilton looks on at the Warriors’ game against the Rockmart Yellow Jackets at Ratner Stadium on Friday, Nov. 1.

Gordon Central senior Jesse Walters smiles in full pads and uniform during the Warriors' football game against the Rockmart Yellow Jackets on Friday, Nov. 1. Walters scored the team's only points of the night on a 75-yard touchdown run.

Gordon Central senior Jesse Walters raises his helmet while head coach T.J. Hamilton looks on at the Warriors’ game against the Rockmart Yellow Jackets at Ratner Stadium on Friday, Nov. 1.

If you have attended a Gordon Central sporting event in the past five years, chances are you have come across Jesse Walters. Walters, a five-year senior with special needs, has been described as Gordon Central’s No. 1 fan and is as constant presence on the GC sideline.

Currently, he is Gordon Central football’s team manager, at practice running the clock and making sure water bottles for the players are filled. While Jesse had yet to see field action in a game with his Warriors, all that was about to change.

“We (the coaches) all sat down about a month ago,” Hamilton said. “I was thinking about different ways we could get Jesse involved ... and it just dawned on me, let Jesse run the football.”

Hamilton said he approached his coaches and shared his idea. They were all on board, but the question became, how do we execute it?

“I said we’ll let him come back in after halftime, we’ll throw his gear on after halftime and then once fourth quarter comes around, we’ll see how things are and get him in there,” Hamilton said.

Hamilton then reached out to Rockmart football head coach Biff Parson and Parson was quickly on board. Jesse would suit up in full uniform Friday night at Ratner Stadium

Hamilton informed the team about Jesse suiting up at Friday’s game in full uniform on Wednesday during practice, and Hamilton said the boys were fired up.

“Nelson (Gravitt) said ‘We gotta get you some swag, Jesse,’” Hamilton said. “(Gravitt) threw some wristbands on him and he wore Nelson’s shoes. He was up there stomping around and he ready to go.”

As Friday, Nov. 1 rolled around, the Gordon Central Warriors were welcoming the Rockmart Yellow Jackets. At halftime, though, the Jackets were up 38-0.

“We came in at halftime and I took Jesse around the locker room, asking him how he was doing,” Hamilton said. “Coach (John) Rainwater went and grabbed up stuff, put it in his locker and immediately after that is what the video you’re seeing and he just goes nuts. It was absolutely amazing.”

The video Hamilton is referring to captures Jesse’s realization of suiting up in full uniform for the second half. If you haven’t seen it yet, we highly recommend you check it out on the web version of this story at CalhounTimes.com. Needless to say, it’s an epic moment, one that Jesse will never forget.

Tonight I got to witness one of the most inspirational moments of my life! Watching Jesse be told that he would suit up...

“I was happy because of what the team did for me,” Walters said. “After I got to the locker, I was happy and jumping up and down and coach said, ‘Suit up.’ After I got ... everything on, I went in there to jump up and down with the team.”

“His reaction, nothing else mattered,” Hamilton said. “It was amazing.”

After three quarters, Rockmart held its 38-0 lead. With 12 minutes to play, there was too much ground to be made up.

“As the game kept going on, it was like we’ll do it ... first possession fourth quarter,” Hamilton said. “We wanted to run a play or two just so that way, he could get the excitement built up. I was trying to get him to run down our sideline and he said, ‘Coach, I got this.’”

Walters took his place in the football game against one of the best teams in the state of Georgia.

“I felt really good when I put the pads on,” Walters said. “I was ready to get on (the field).”

GC quarterback Sean Gray handed Walters the ball, and the rest is history.

Walters charged 75 yards down the field for a touchdown. It would be the Warriors only score of the night, but they are perhaps the biggest points GC has scored in a long time.

“I wanted to go that way to get down there to the (end zone)” Walters said. “They looked at me and said ‘Dang, who was that?’ He said, ‘There’s the Warrior.’ And I said ‘OK, there’s me.’ They was happy and they came over and hug me and congratulate me. I hugged my coaches and told they thanks. I was happy and I love them so much.”

When asked what he’ll remember most about that Friday night, Walters said immediately being on the field.

“Scoring that touchdown and ... I want to come back and be a coach for GC,” Walters said. “It was a privilege for me from the coaches. The head coach on the other team was happy how fast I ran.”

After Walters crossed the goal line, the entire Gordon Central team came thundering onto the field to celebrate and congratulate Jesse on his accomplishment.

“The whole time I was like, man I cannot believe this just happened,” Hamilton said. “You change kids’ lives in that way. This is something we’ll all remember for the rest of our lives. It will be like, ‘Where were you when Jesse Walters scored his first touchdown?’ and it was against the best team in the state too.”

Walters danced on the sideline, getting plenty of high fives and hugs.

“I came back in (the locker room after the game) and I told the team, ‘It’s y’all’s score and my score and all our scores.’ They were coming over there and hugging me.”

Hamilton said the moment will definitely go down as one of his top coaching memories, possibly No. 1.

“I don’t know if there will ever be another feeling like it, even if I ever got a chance to win a state championship,” Hamilton said. “I don’t think it will compare to that moment. In my 12 years, it’s No. 1.”

So what’s next for Walters? He graduates in May 2020, and after that, he expressed interest in going to the University of Georgia or the University of Florida to serve on their respective football program’s staffs. So, Kirby Smart and Dan Mullen, you’re officially on notice.

Hamilton said he wants to keep Jesse at Gordon Central High School as a coach.

“Hopefully, he’ll be here as long as I’m here,” Hamilton said. “He’s going to be the staple here for Gordon Central football. Right now, he’s wanting to go to Georgia and take over their stuff at Georgia, ... but I want him to stay here and continue doing the job that he’s doing. He’s a phenomenal kid.”

“Every day is the best day,” Hamilton said. “He treats everybody with respect. He loves everybody (and) he’s so genuine in everything he does.”

Walters may have special needs, but that has never stopped him. His infectious energy, passion and unwavering support for the Warriors and its athletes are what make him truly special. Jesse Walters is what you might call a true Warrior.

'Cautious but not worried': local expert dishes on the coronavirus