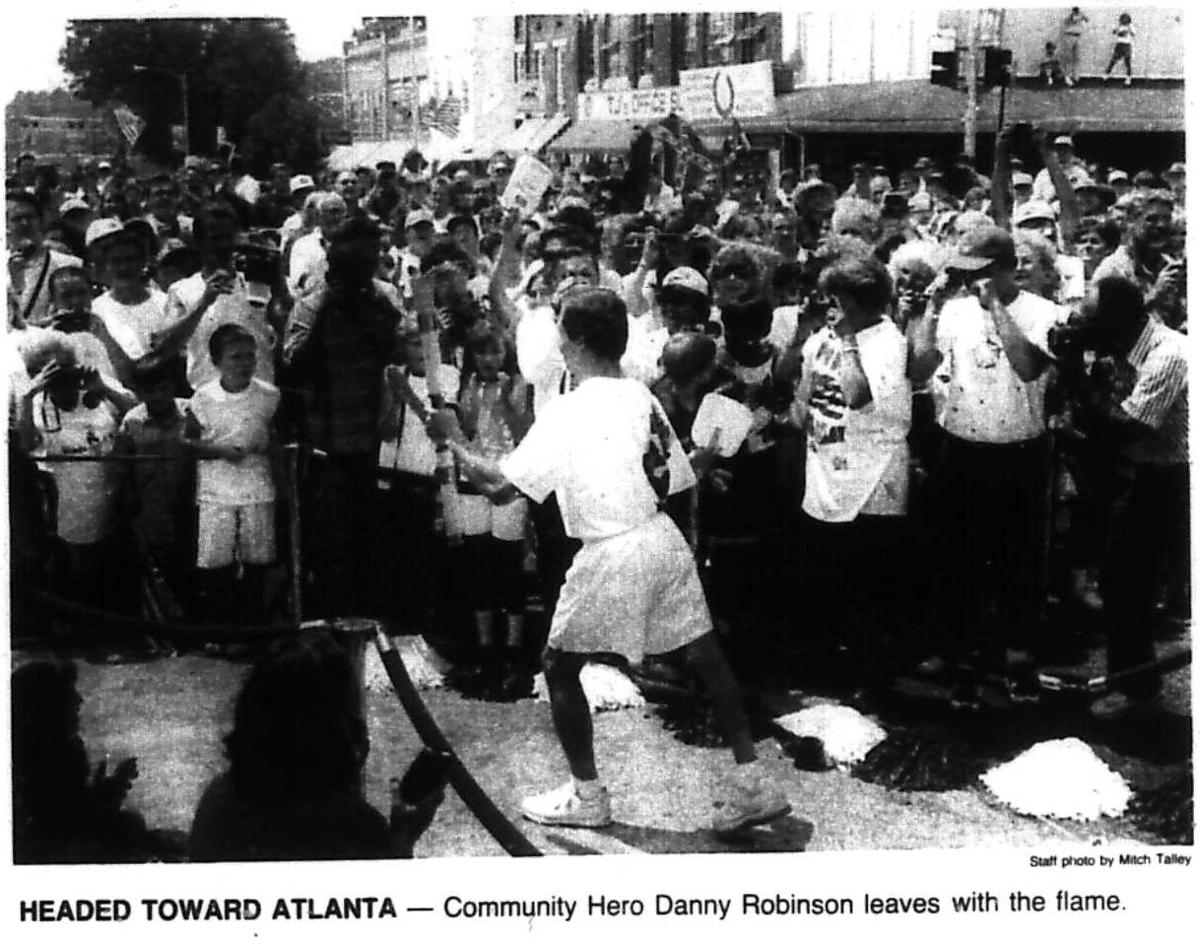 Danny Robinson turns to head south on Wall Street after receiving the Olympic flame Tuesday, July 16, 1996, in front of the Gordon County Courthouse before a crowd of several thousand people. 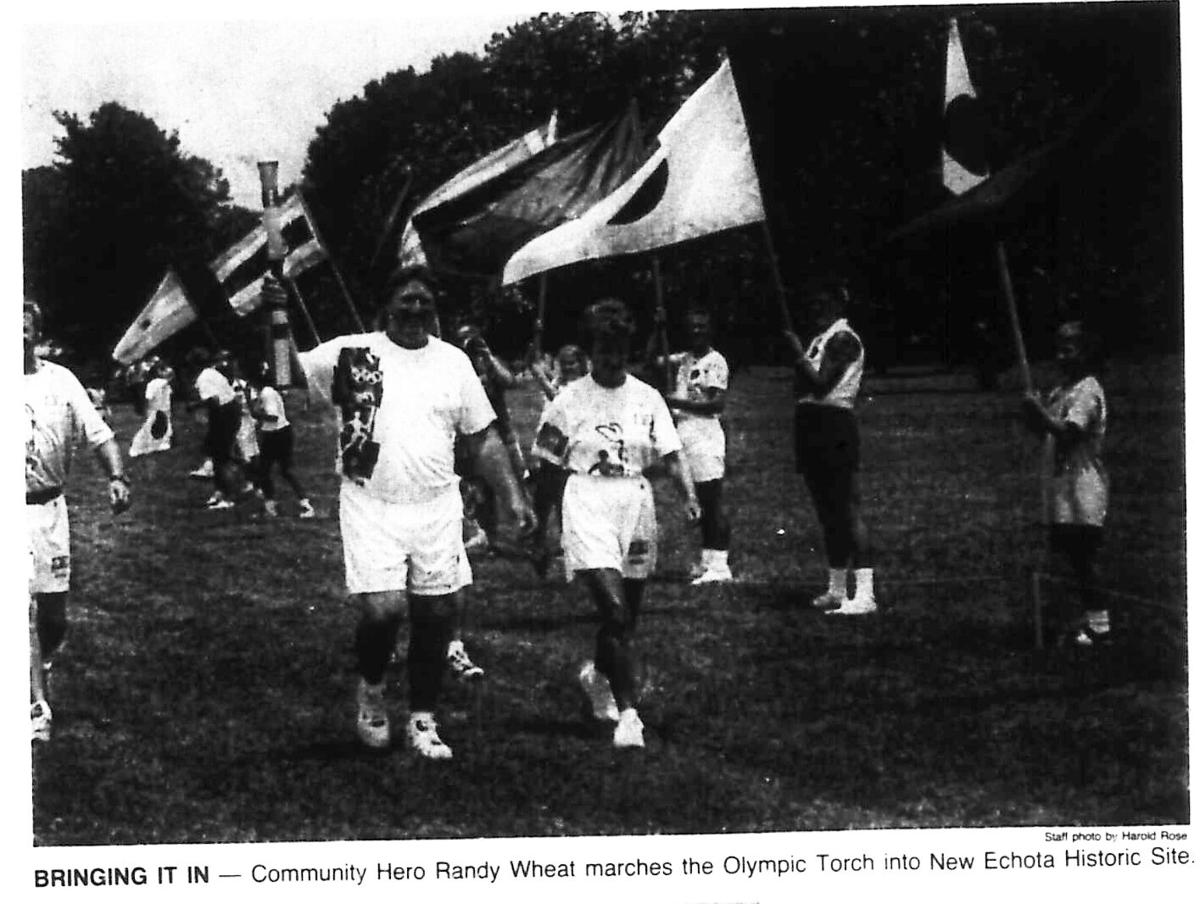 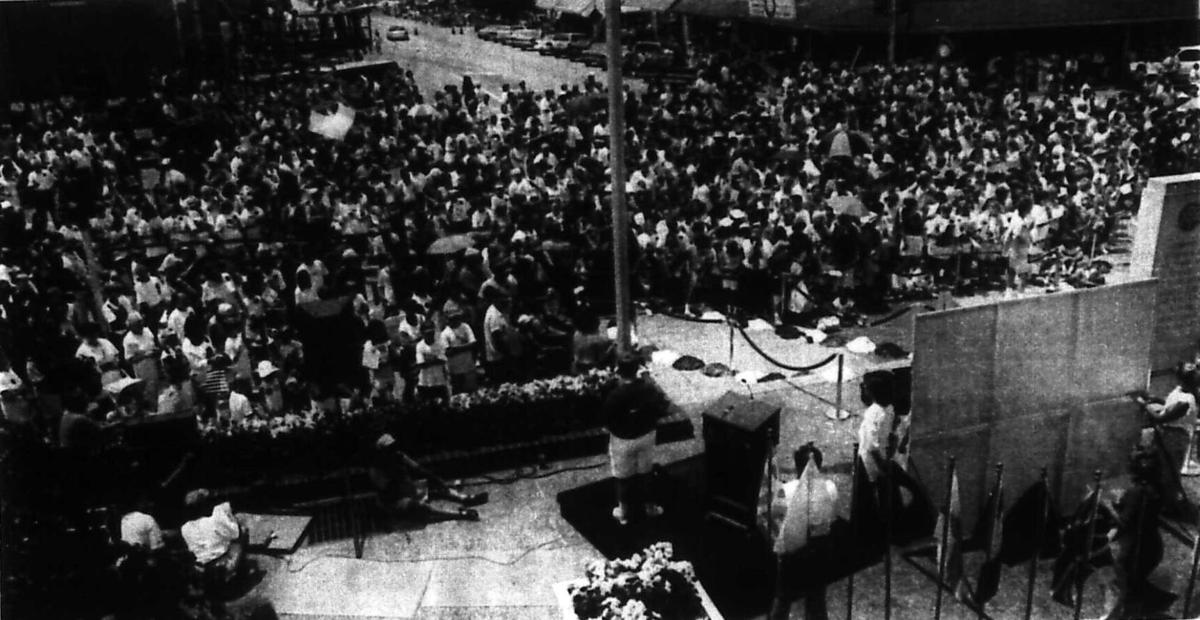 Thousands gather on July 16, 1996, at South Wall Street and Court Street in front of the Gordon County Courthouse to see the Olympic flame passed between torches. 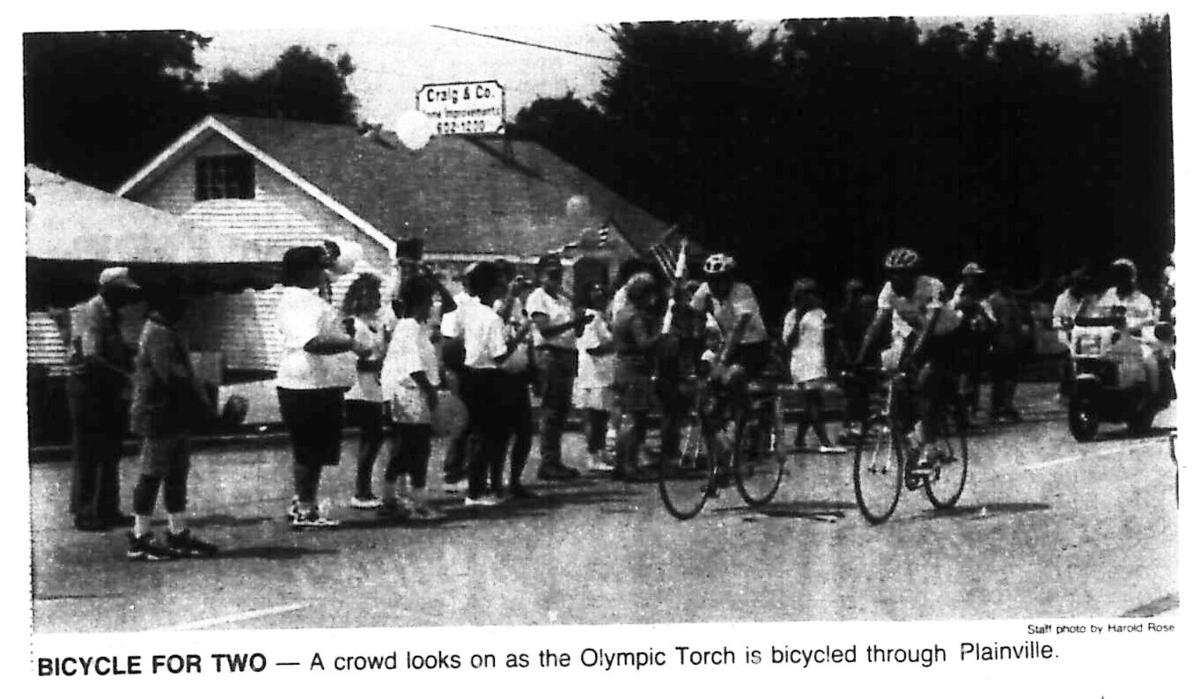 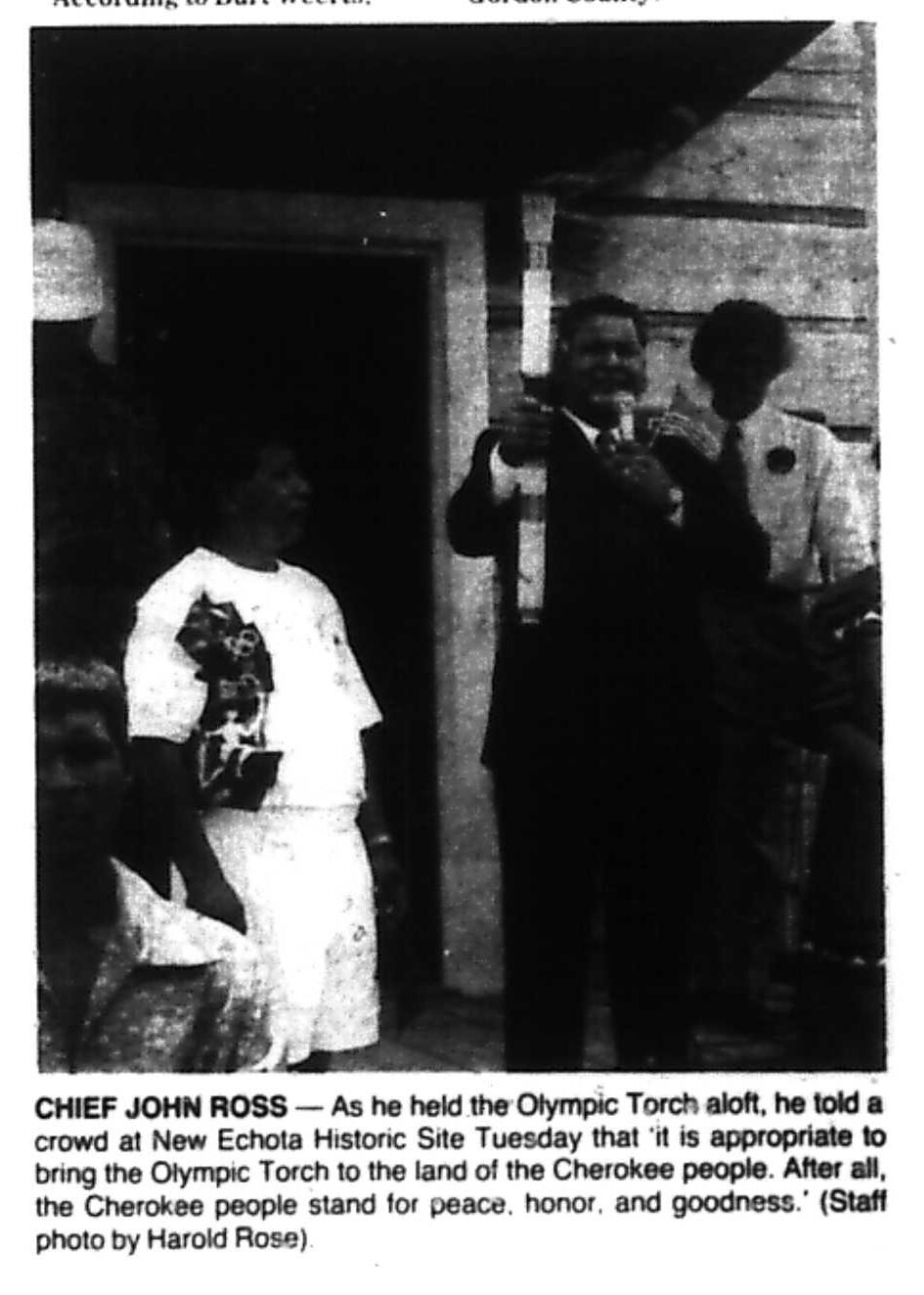 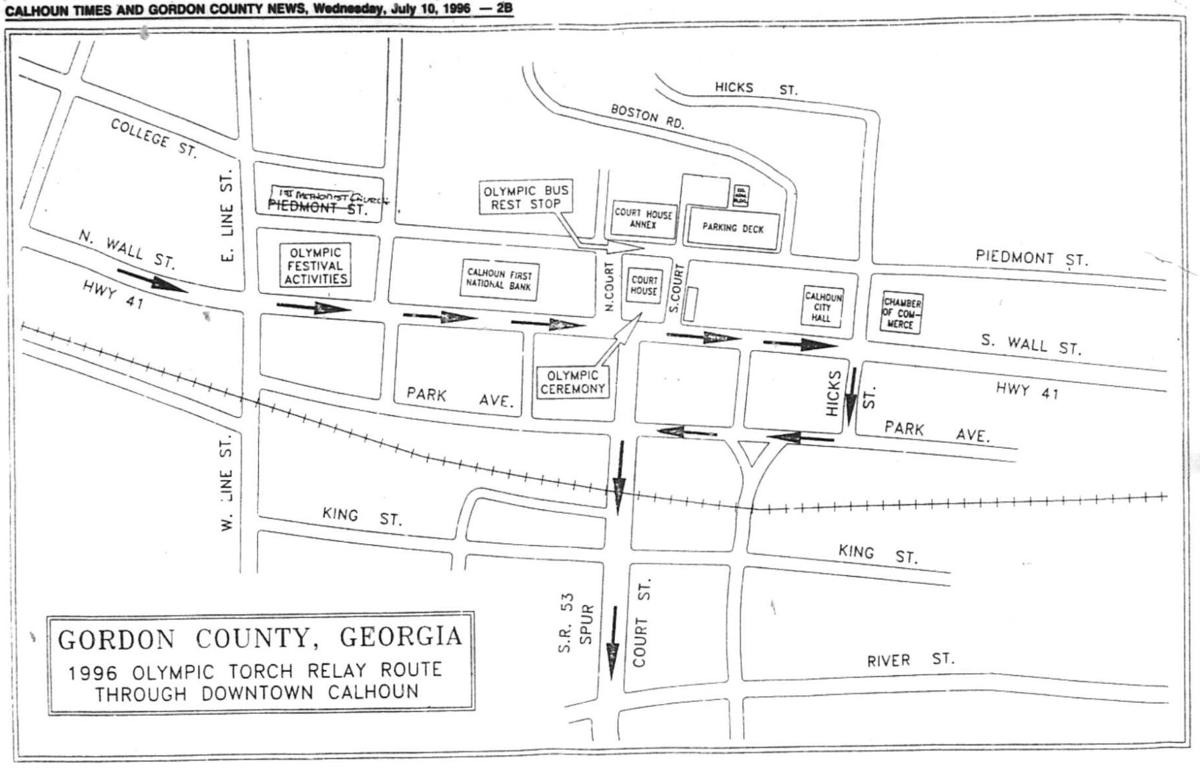 The Olympic torch relay route as it passed through downtown Calhoun, on July 16, 1996. 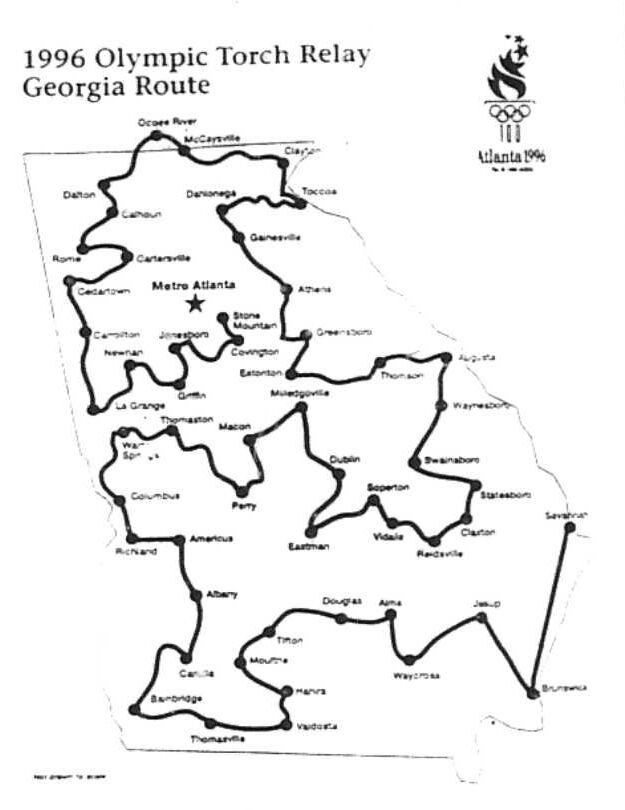 The torch relay passed through Gordon County just three days prior to the opening ceremonies for the 1996 Centennial Olympic Games in Atlanta. 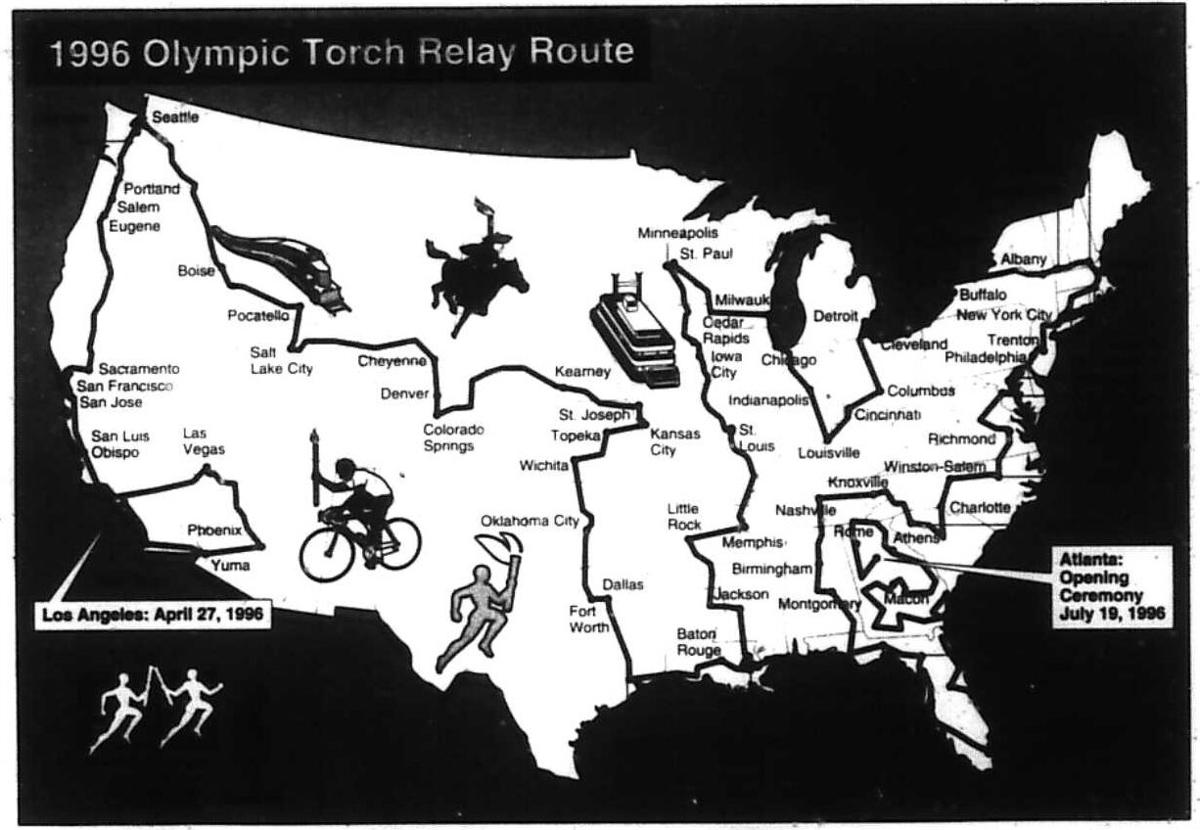 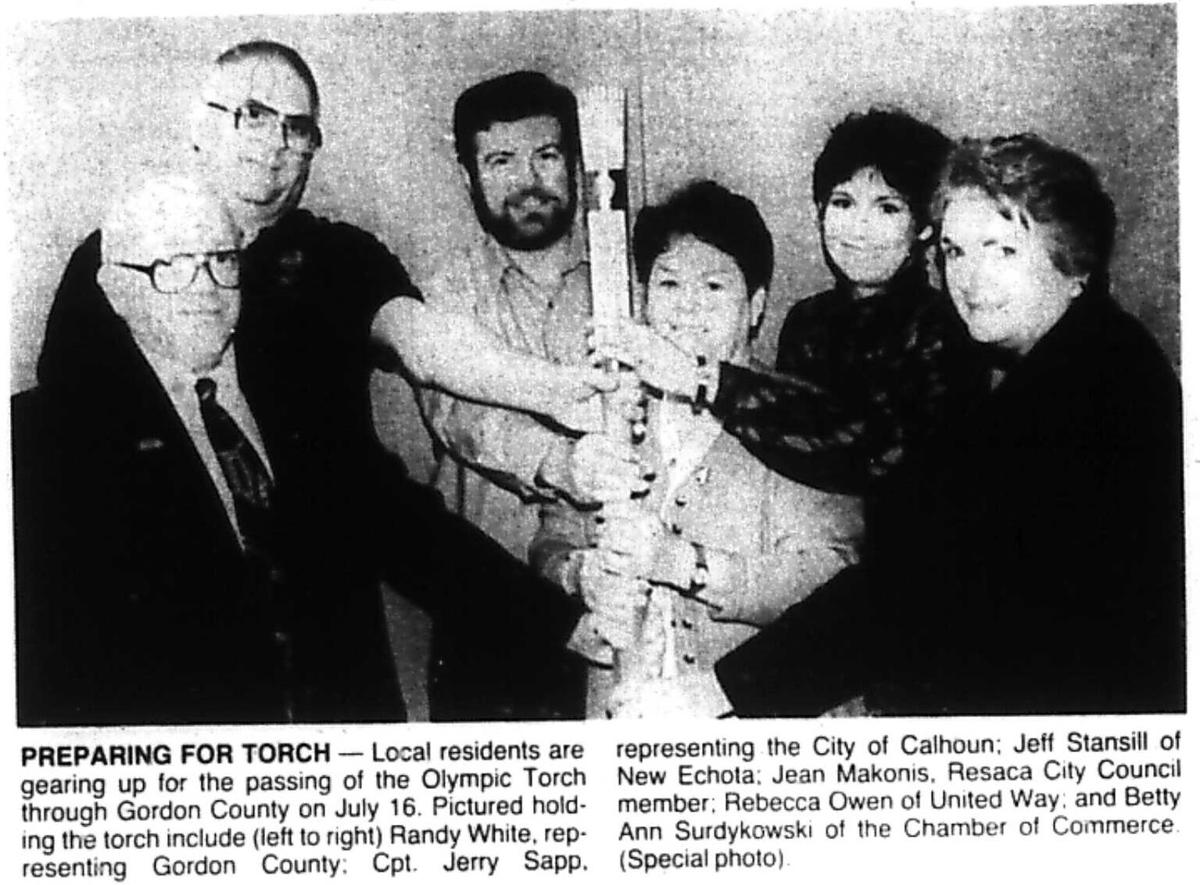 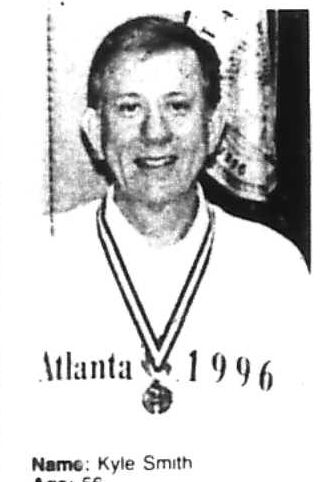 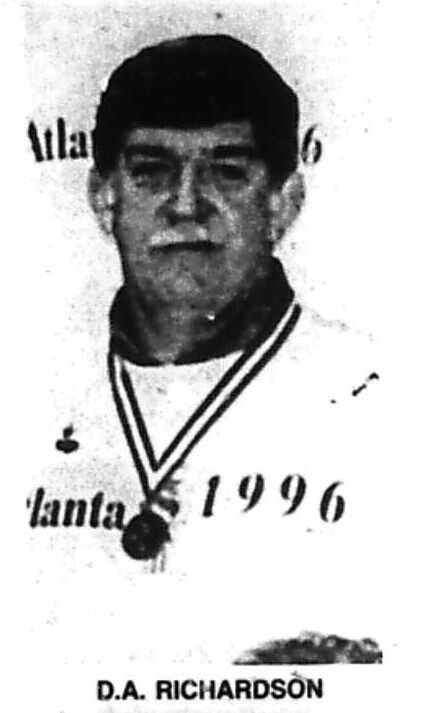 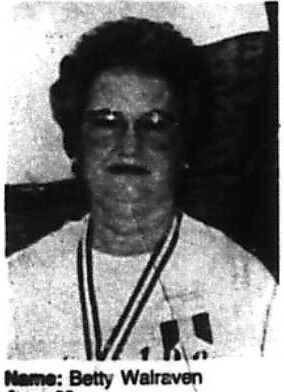 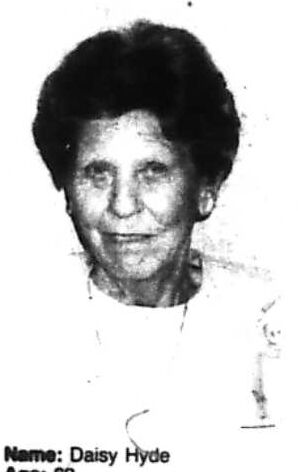 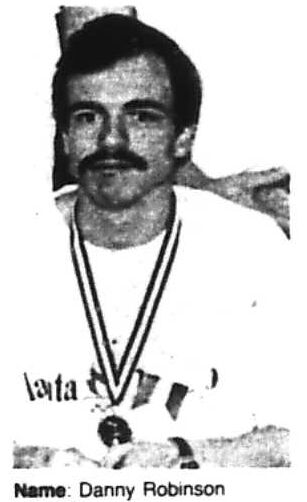 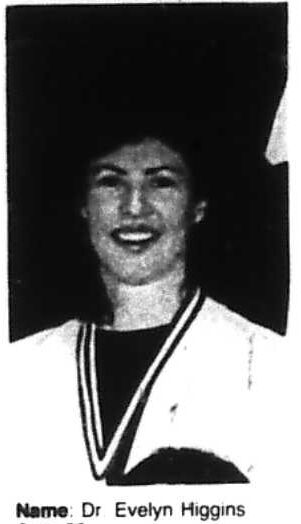 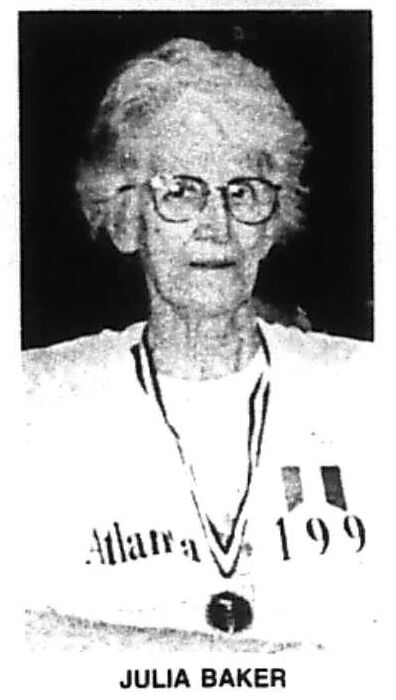 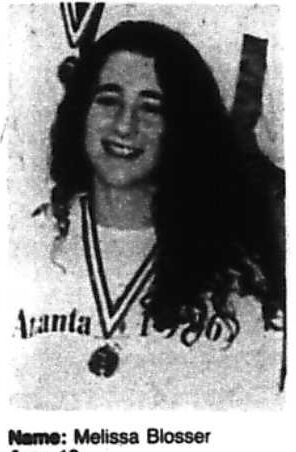 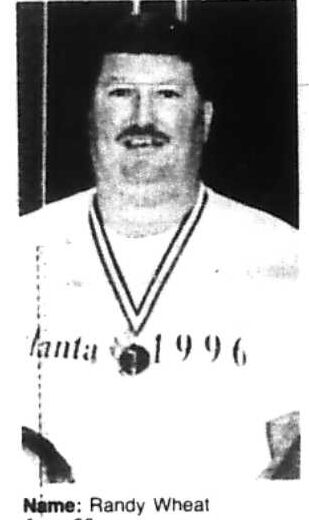 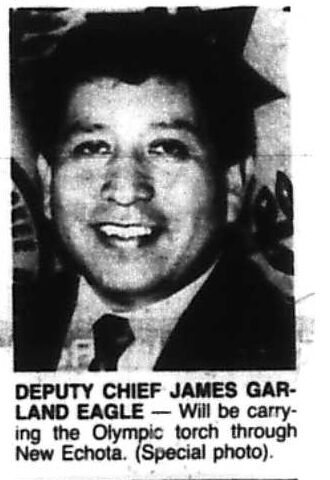 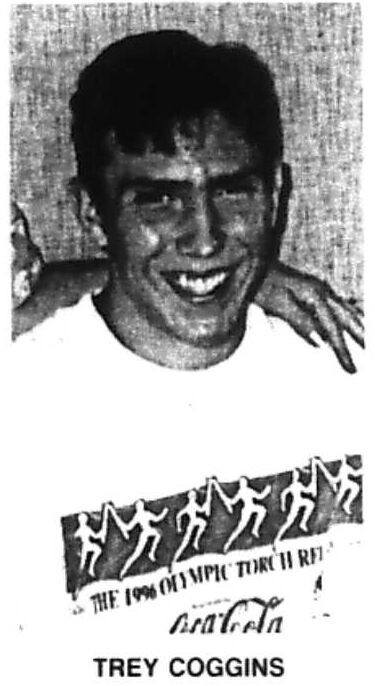 Danny Robinson turns to head south on Wall Street after receiving the Olympic flame Tuesday, July 16, 1996, in front of the Gordon County Courthouse before a crowd of several thousand people.

Thousands gather on July 16, 1996, at South Wall Street and Court Street in front of the Gordon County Courthouse to see the Olympic flame passed between torches.

The Olympic torch relay route as it passed through downtown Calhoun, on July 16, 1996.

The torch relay passed through Gordon County just three days prior to the opening ceremonies for the 1996 Centennial Olympic Games in Atlanta.

This week marks a quarter century since one of the biggest events in Gordon County history took place, but it’s a day that stays fresh in the minds of a chosen few.

On Tuesday, July 16, 1996, the Olympic flame passed through Northwest Georgia, just three days ahead of the opening ceremonies for the Centennial Olympic Games in Atlanta.

Entering Gordon County just north of Chitwood Road in Resaca, the flame then made its way down Craigtown Road en route to New Echota where in was held for a time by various Cherokee officials, including Deputy Chief James Garland Eagle as part of an all-day ceremony at the park.

Randy Wheat, the Resaca fire chief at the time, brought the flame onto the grounds at New Echota, an experience he remembers well.

“It was kind of a once in a lifetime moment,” Wheat said. “It was a special time, especially doing it at New Echota.”

Wheat, who considers himself “just an old country boy,” said he remembers the large amount of onlookers and even signed some autographs.

“I had never seen a crowd like that in my life,” Wheat said. “People were asking me for autographs, and I even signed a baby diaper. It was exciting .. it was a real time.”

The attire for the relay was another adjustment for Wheat.

“They gave me these little silk shorts and a T-shirt,” Wheat recalled with a laugh. “I’d never really worn anything but blue jeans, and I told my wife I didn’t know if I could fit into that stuff ... but I wore it!”

Looking back on the past 25 years, Wheat said his youngest child had only recently been born at the time of the torch relay, and now he tells his grandkids about the experience.

“It was exciting. We got to go to Atlanta and were honored at dinners,” Wheat said. “I still have the torch that the guys at the fire station bought for me.”

As the relay made its way down Highway 41 towards downtown Calhoun, Kyle Smith remembers taking the flame somewhere near Echota Smokehouse where Thatcher’s BBQ is now.

“I was the first one at the edge of town,” Smith said. “That particular day the torch started somewhere up in Northeast Georgia. I believe I was bearer No. 70-something.”

After his leg of the relay, Smith said he was taken into downtown Calhoun in a van along with some of the other participants, and was struck by the size of the crowds waiting for the torch to arrive.

“When we finished our part of the journey they loaded us into the van and got us into town,” said Smith. “It would probably be among the largest crowds ever to gather in Calhoun. As you got into town you could hardly even maneuver. Crowds lined both sides of the road.”

Smith said he enjoyed the time spent with other local participants before, during and after the relay, and often looks back on the magnitude of the event.

“It was a big day in Calhoun, Georgia.”

D.A. Richardson, who said he carried the flame down Highway 41 to around Red Bud Road, said carrying the Olympic torch had been a dream of his since childhood.

“Growing up in Mississippi, I remember going to the movies and seeing news clips about the Olympics,” Richardson said. “I never thought I’d be an Olympic athlete, but I always wanted to carry that torch.”

Richardson said his wife nominated him, and it was one of the top experiences of his life.

“It was unreal. I can hardly describe it to you,” Richardson said. “It was like I was floating. I just jogged as slow as I could go. It was an unreal experience. It’s my 15 minutes of fame. I coached for 31 years, but it’s definitely the highlight of my career. I’ve still got my torch and my uniform.”

After his relay leg, Richardson was among those driven into downtown for the courthouse ceremony. He said, along with several of his high school athletes, he had helped construct a platform for the bell that now rests in the park downtown. He said he had a little fun ringing the bell before and after the flame reached the courthouse steps.

“I got permission from the mayor to make a stand out of two by sixes about 8 feet high,” Richardson said. “I rang that thing as the torch was coming into town, and then again as it was leaving.”

From the courthouse, the relay traveled north up Wall Street in the hands of Danny Robinson, who carried the flame down Hicks Street to Park Avenue and started the journey down Court Street.

The flame would eventually make its way via bicycle through Plainville and to the Floyd County Line en route to downtown Rome.

As one of the 2,500 individuals worldwide selected by Coke to carry the torch, Trey Coggins was asked to fill in a gap outside his home county.

“My location was just outside of Young Harris College,” said Coggins who was nominated by family friend Betty Wheat to participate. “I was the fourth runner of the morning somewhere around 5:30 a.m.”

Coggins said he was a little disappointed not to have a spot in his hometown, but instantly felt the importance of the moment when his time came near.

“I just wanted to take it all in and enjoy all the history and everything that surrounds it ... all the pomp and circumstance,” Coggins said. “I don’t think I quite understood the gravity of the situation until the morning of. Deep down I knew it was big, but it didn’t really hit me until I had the uniform on and the torch was in my hand waiting for the flame to be passed. At that moment, I thought ‘wow this is a big deal!’

Coggins was able to make it to downtown Calhoun for the ceremony there later in the day, and like his fellow relay participants, remembers the size and excitement of the crowd.

“To come into town and see that massive crowd ... I don’t think I’ve ever seen an event in town that had that big a draw,” Coggins said. “It was a very special moment for me. The community treated us like rock stars.”

Now a school teacher near Nashville, Tennessee, Coggins said he always tries to watch the opening ceremonies with his family.

“It was one of the biggest moments of my life,” Coggins said. “I still watch every moment of every opening ceremonies. I have three kids now, so I always want them to sit down and watch it and know that daddy was a part of that.”

After the day of the relay, the whirlwind still wasn’t over for the hometown heroes who carried the flame.

“They later gathered us all at the Forum in Rome for another ceremony,” Smith recalled.

Richardson, who still sometimes gets asked to make appearances with his torch back in his hometown near Philadelphia, Mississippi, said he remembers local mills and other businesses bringing torch bearers in for their employees who missed the relay in person.

“They’d shut work down completely and just have people gather in the break rooms just to see the torches,” Richardson said.

3 key factors in the Chicago Sky’s WNBA playoff opener tonight vs. the Dallas Wings, including Diamond DeShields’ scoring off the bench

Traore's hat trick helps UT get back in the win column