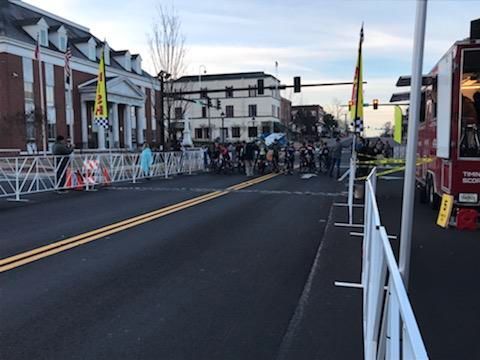 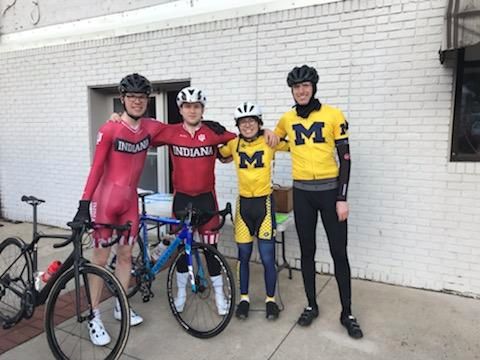 Indiana University and University of Michigan cyclists pose for a picture during the Georgia Tech Calhoun RR and Downtown Criteria Race. 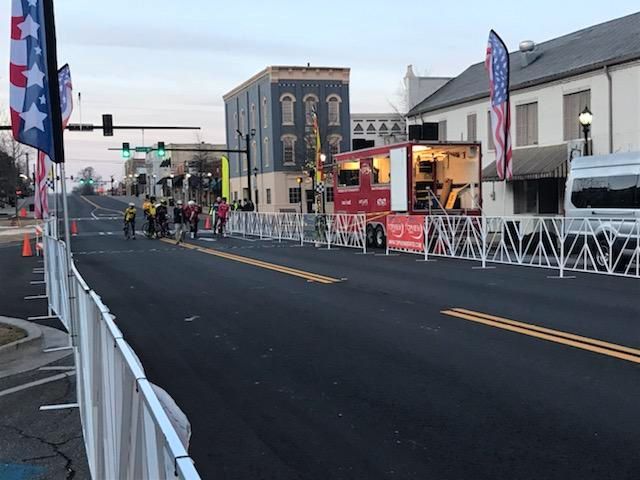 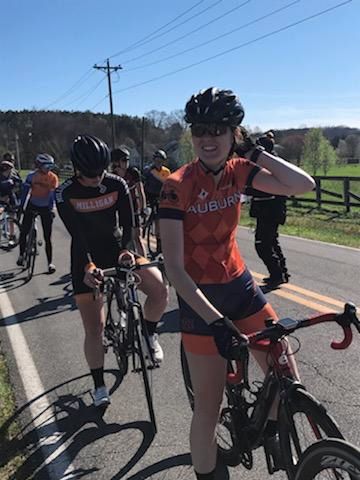 Indiana University and University of Michigan cyclists pose for a picture during the Georgia Tech Calhoun RR and Downtown Criteria Race.

This past weekend, you may have noticed roads closed off through downtown Calhoun. Georgia Tech’s cycling team hosted the city’s first-ever Georgia Tech Calhoun RR and Downtown Criteria Race on Saturday and Sunday. The two-day event brought about 220 bikers to Calhoun and Gordon County, according to organizer and Velo Vineyard shop owner, Marcus Palazzolo.

Calhoun and Gordon County were not the original host option. Georgia Tech held their race on courses near Union City, southwest of Atlanta. However, the site was unavailable for the weekend, and Tech had to look for other options.

John Graves, a GT cyclist and son of Georgia Rep. Tom Graves, called in late fall 2019 to inquire about hosting the event in Gordon County.

“Basically, they said their former home course race ... was not available for the weekend,” Palazzolo said. “He called me up and said ‘What do you think? Do you think we can do this?’ and I said sure. At that time, we started to make the calls. John came up and we went and got the permits.”

Palazzolo said it took time to get the necessary permissions to hold the event, contacting the local government, local businesses, Georgia Department of Transportation, the local police department, local fire/EMS services to get everything needed. A lot of planning and coordination go into putting the event on.

The races were sanctioned by the respective governing bodies of USA Cycling and the Southeastern Collegiate Cycling Conference (SECCC), the later of which sanctions collegiate races. The SECCC is one of 11 conferences across the nation part of the National Collegiate Cycling Association.

John Graves, son of Georgia Rep. Tom Graves, was injured Sunday and had to be taken to hospital. However, the following day, Rep. Graves announced on Twitter his son was responding well to treatment.

Despite the accident, Palazzolo hailed the weekend as an overall success.

“Beautiful weather helps a lot,” Palazzolo said. “This was a collegiate event so that means there were ... about 10-plus schools represented from all over the nation.”

“The brewery had a little bit of a different customer base going in there,” Palazzolo said.

Palazzolo said he heard a lot of positive feedback from the community, so much so organizers would like to hold the event in Calhoun going forward.

“The club, the promoters, the racers, they loved it,” Palazzolo said. “Every bit of feedback we got was awesome. They really enjoyed the courses. We have great roads in Gordon County. We had really good support. One of the regional directors that was here from the SECC, he commented he really thought we should make a bid in a couple years for nationals, which is a much bigger event.”

Palazzolo said to host another event like this, the process would start about six months prior to race weekend.

“You just notify your county commissioners and city council, then the next step is to get your permits,” Palazzolo said. “Shortly after that, you need to notify and get approval from the DOT because (U.S.) Highway 41 is a state highway and that needs to be approved for closure for a period of time. Then the city and county municipalities, they want to have your insurance verified. Then after that, you line up your support pieces.”