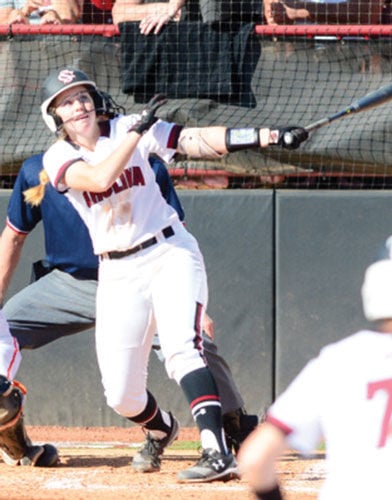 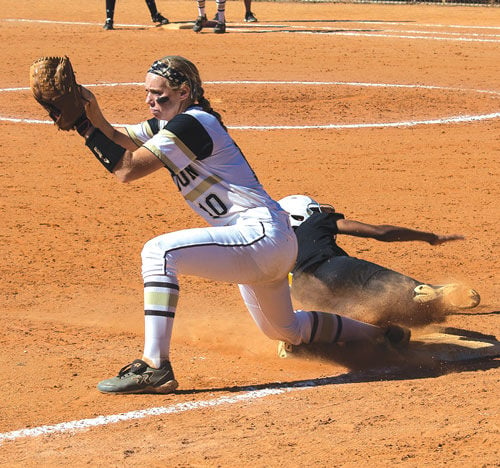 Calhoun’s Jana Johns takes a throw at third base during a game in Columbus at the 2016 Class AAA Elite Eight. 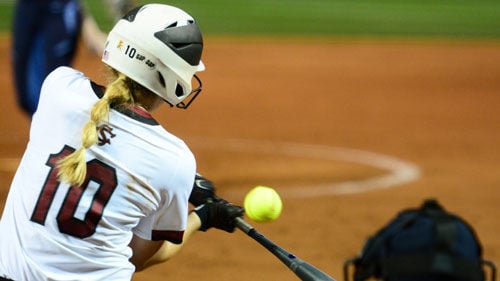 South Carolina’s Jana Johns connects for one of her three hits during a game against UNC on Tuesday, Feb. 20, 2018. (South Carolina Athletics)

Calhoun’s Jana Johns takes a throw at third base during a game in Columbus at the 2016 Class AAA Elite Eight.

South Carolina’s Jana Johns connects for one of her three hits during a game against UNC on Tuesday, Feb. 20, 2018. (South Carolina Athletics)

Former Calhoun Lady Jacket Jana Johns is heading to the midwest. The South Carolina junior announced her transfer to the University of Oklahoma on Friday via social media with the caption “BOOMER SOONER!!”

A versatile, multi-sport athlete while in high school, Johns signed a softball scholarship to the University of South Carolina in late 2016. During her freshman season, she recorded a .256 average with 43 hits as the Gamecocks made it to the NCAA Super Regionals for just the second time ever. Johns came into her own during her sophomore season, hitting .348 while collecting 56 hits and 15 home runs.

Johns’s junior season was cut short after just 23 games due to the COVID-19 pandemic. In the shortened spring campaign, she hit .302 with four home runs and 15 RBIs. Johns started every game in her Gamecock career.

Now in Norman, Johns joins an Oklahoma team that has exemplified success, winning four national championships, most recently in 2017. The Sooners finished runner-up at the Women’s College World Series in 2019.

Competing in the Big 12 Conference, Oklahoma has not lost a conference game since 2017.

In late March, the NCAA’s Division I Council voted in favor of giving member schools the opportunity to grant their spring-sport athletes an extra year of eligibility.

It is very possible Johns could play two full seasons at OU, starting in 2021.

Addiction during a pandemic: 'It's real'

Americans are more likely to report mental health concerns related to the pandemic than other developed countries, survey finds

US adds 1.8 million jobs in a sign that hiring has weakened