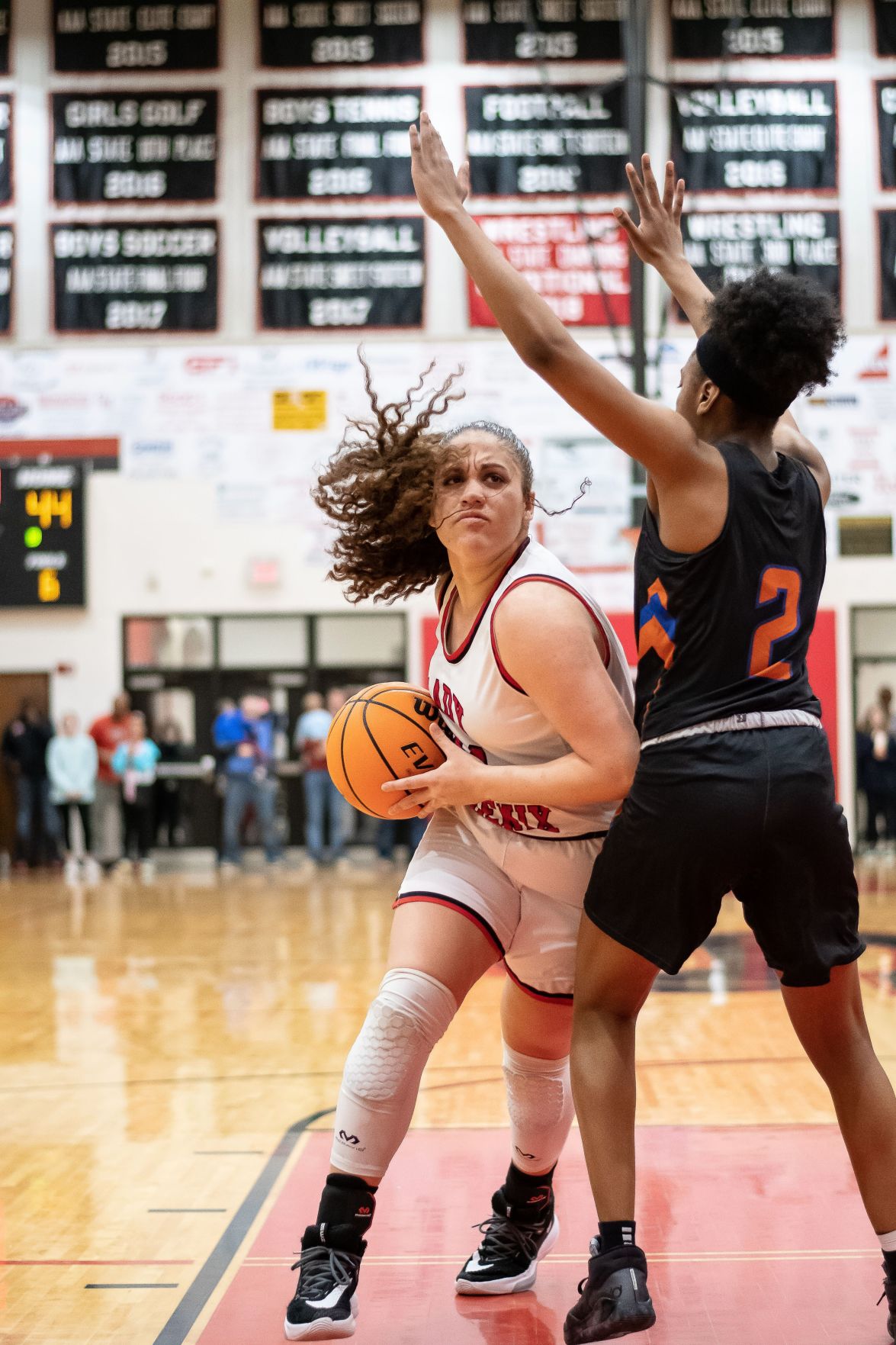 Sonoraville senior Maliyah Parks battles inside the paint for a look at the basket during the Lady Phoenix’s Elite Eight game against the Johnson-Savannah Lady Atom Smashers at Sonoraville High School on Tuesday. She recorded 13 points in her final varsity competition. 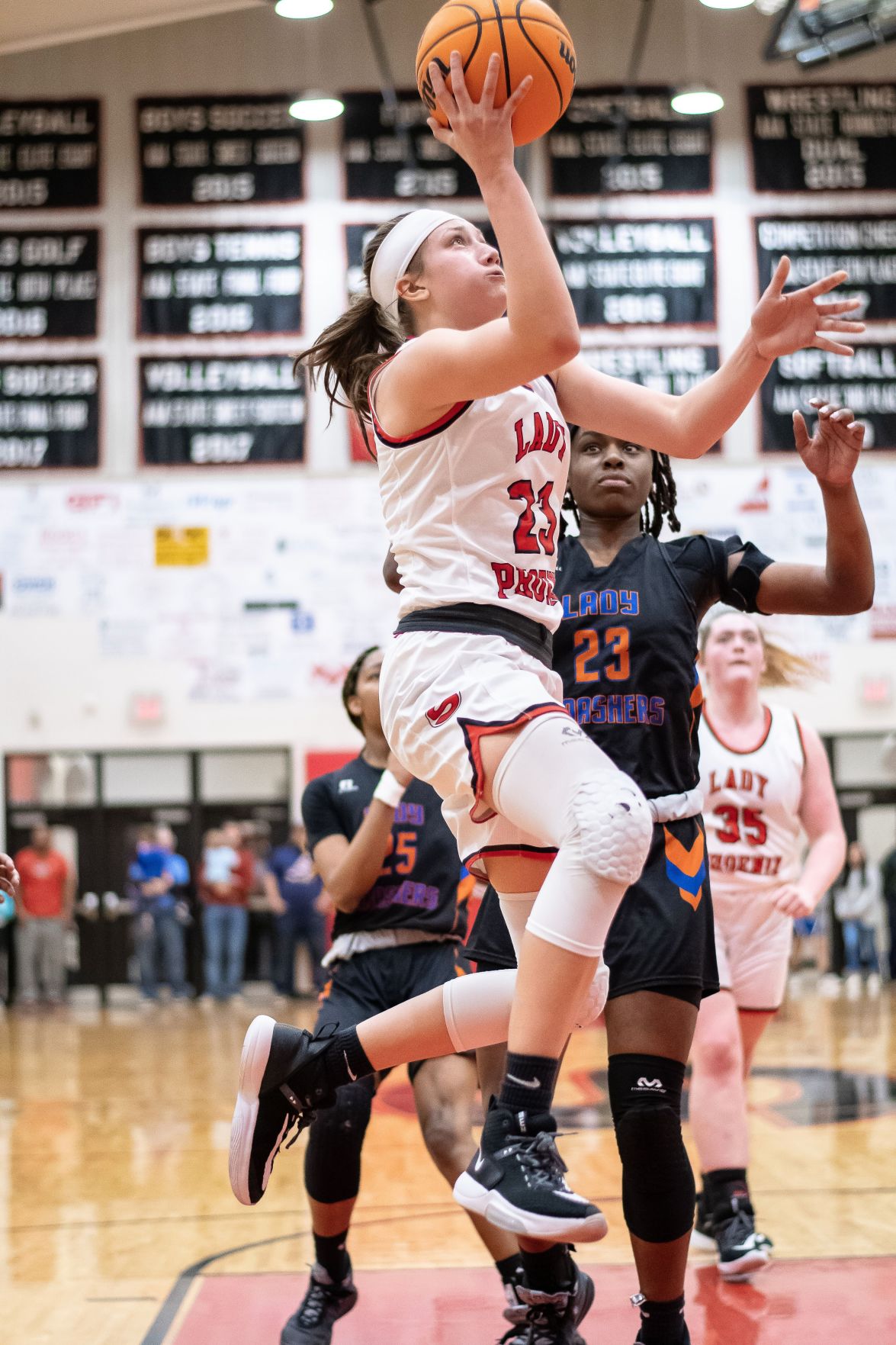 Sonoraville junior Alexa Geary goes for two during the Lady Phoenix’s Elite Eight game against the Johnson Lady Atom Smashers at Sonoraville High School on Tuesday. She finished with 18 points. 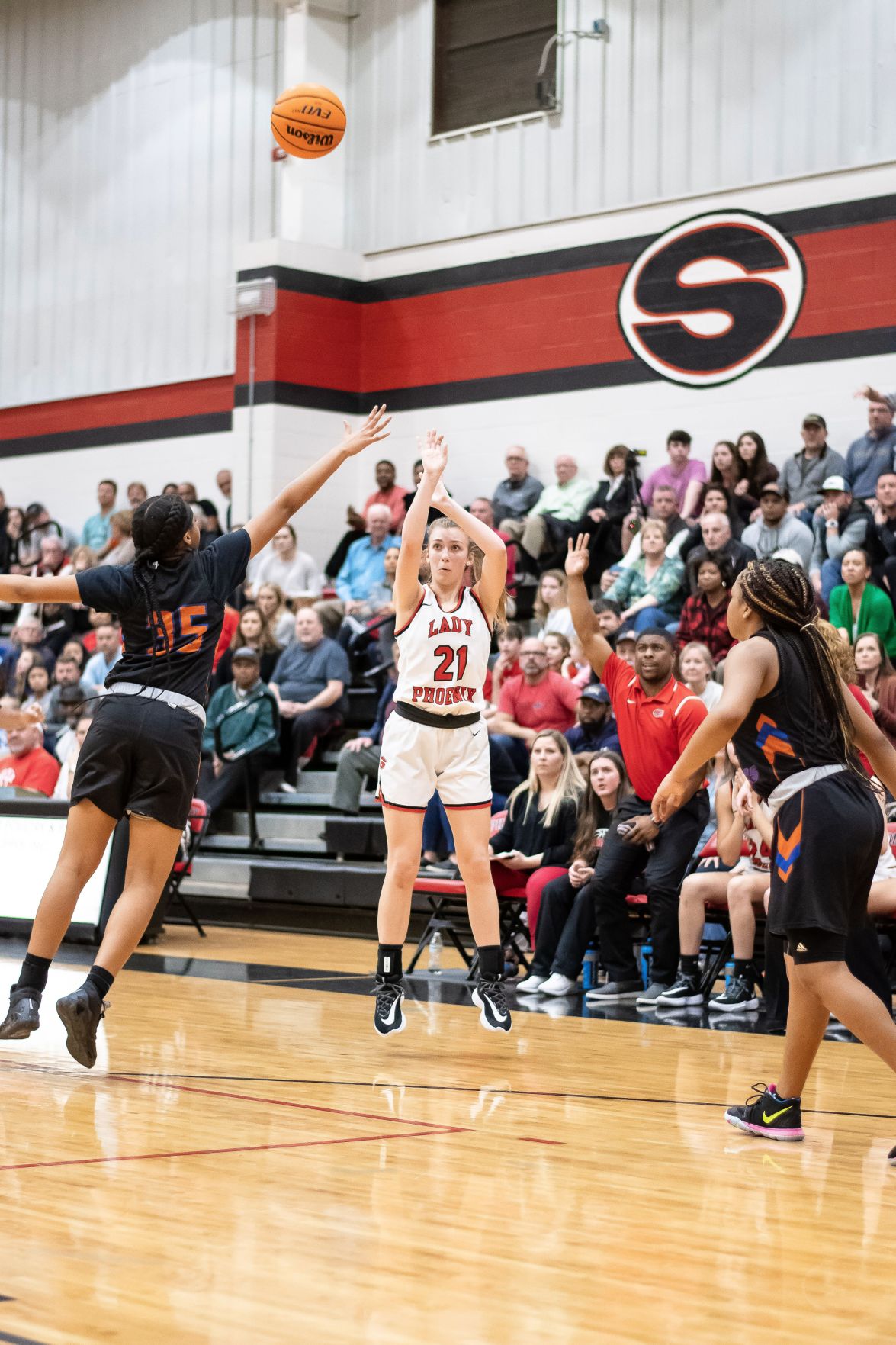 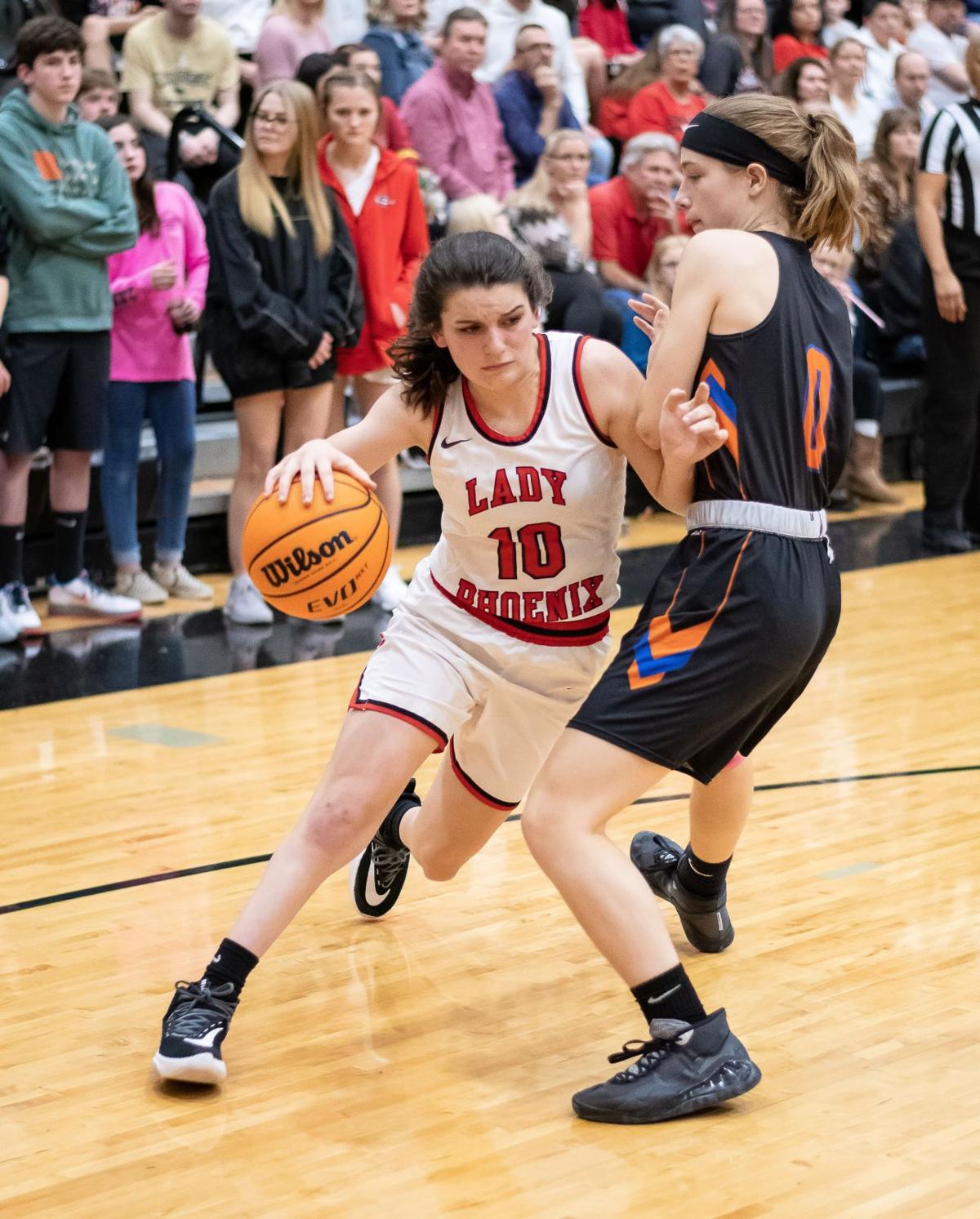 Sonoraville senior Maliyah Parks battles inside the paint for a look at the basket during the Lady Phoenix’s Elite Eight game against the Johnson-Savannah Lady Atom Smashers at Sonoraville High School on Tuesday. She recorded 13 points in her final varsity competition.

Sonoraville junior Alexa Geary goes for two during the Lady Phoenix’s Elite Eight game against the Johnson Lady Atom Smashers at Sonoraville High School on Tuesday. She finished with 18 points.

It was to be the final home game of the season, as the host Sonoraville Lady Phoenix looked to advance to their second consecutive state semifinal. The gymnasium was packed out. The crowd was present, electric and ecstatic. Everything had the markings of this game coming down to the wire. A 32-minute battle for a trip to South Georgia.

The Lady Phoenix’s road to Valdosta pitted them against Class AAA defending state champions Johnson-Savannah Lady Atom Smashers, the same team that knocked them out last year in the final four.

This year, that arduous journey ended on a sour note in the elite eight as Johnson-Savannah eliminated Sonoraville 58-49 Tuesday at Sonoraville High School. The Lady Phoenix finish the 2019-20 season at 23-7 as their 12-game win streak fell by the wayside.

“(Johnson-Savannah) is a solid team,” Lady Phoenix head coach Stephanie Caudell said. “Everybody that they bring off the bench is a good player, is an athletic player and they’re tough. But I am so so proud of how we fought so hard for 32 minutes.”

In the loss, junior guard Alexa Geary led the way with 18 points.

After the game, Caudell addressed the team as typical, but had a message for the girls.

“I just told them I’m proud of them and I love them and that I was honored and humbled to be their coach,” Caudell said. “I wouldn’t want to coach any other team in the state, in the world.”

Sonoraville found itself behind the 8-ball early as Johnson-Savannah went up 8-1. At one point, the Lady Smashers led 27-10 about halfway through the second quarter.

At halftime, Sonoraville trailed Johnson 28-17. However, the Lady Phoenix would rally to begin the third quarter, as junior Abby Chambers got things started early with a deep three pointer.

Slowly, Sonoraville chipped away at the Lady Atom Smasher advantage, slicing the edge to a one-possession 47-44 contest with 4:17 to play in the fourth quarter.

“We needed to come out (of the half) and make some shots and get ourselves back into the game,” Caudell said. “These kids, they’re not scared to take big shots. Abby, Alexa, Maliyah (Parks), Matti (Parker) today, all of them. Brooke (Jones) and Kinsley (Long) played tough inside against kids that are longer and more athletic than they are. We’ve got to fight and that’s what they did.”

The Lady Phoenix kept within one or two possessions for several minutes, but could not find an equalizer or take the lead. The team never had the lead once in the game.

“It’s tough to come back against a team like that,” Caudell said. “When they get that lead, you have to put so much effort into coming back. It’s draining. We just didn’t have that last little push that we needed. We had it to three and I think if we had ever gotten over the hump, might have been a different story.”

But the Lady Phoenix resurgence underscored what the squad has done all season long: continued to fight.

“I’ve watched a lot of film on that team and I’ve seen a lot of teams that get down early and they just fold and it ends up being 20-30 ... point game,” Caudell said. “These girls fought the whole time and if we hadn’t dug ourselves a little bit of a hole, it might have been a different story.”

Ultimately, the charge back fell short as Johnson’s Zoriah Mobley hit two critical three pointers from downtown to put the Lady Smashers up 53-47 late in the fourth. A few crucial stops and fate-sealing converted free throws delivered one team into the Class AAA semifinals at Valdosta State University and another side to a sinking realization that the playoff push is done.

“You hate this feeling, but there’s only going to be one team that ends on a win in the whole state, so everybody’s going to experience this,” Caudell said. “It’s hard, but I think hopefully the ones we have coming back learn that they can compete in a game like that against a team like that. We’re going to hopefully learn from it and work hard.”

With the season now over, the Lady Phoenix move on to other pursuits. For some, spring sports are here and the seasons are already underway. For others, it may be standardized test time with a side of continual college searches or just a normal return to classes and academics.

For one particular Lady Phoenix, it is the end of her varsity basketball journey. Sonoraville senior Maliyah Parks recorded 13 points in what turned out to be her last varsity performance. The senior has had a storied career with the red, black and white.

Parks not only finishes her career as the school’s all-time leading scorer, but also snags over 1,100 rebounds.

“She’s meant as much to this program as any player that’s ever played for us,” Caudell said. “Never missed a game — ever. That says a lot for that kid and that’s just the kind of person she is. She has a work ethic like no other. She’s going to be something special and do whatever she wants to because she’s just got that kind of attitude.”

Parks is Sonoraville’s lone senior and Caudell will have most of her team back for 2020-21.

“I’m excited. I love the ones I have coming back, but it’s hard right now,” Caudell said. “We’ll start thinking about that in a few weeks. Right now, we’re going to remember this season and how good it was and what a good memory it is for all those kids.”

Caudell said she will remember the 2019-20 Lady Phoenix as a fun group.

“How loose they are and how much fun they have together,” Caudell said. “I love them. They’re a great group of kids and we had a great season. Yes it was awesome, but it’s the relationships that you build that last.”