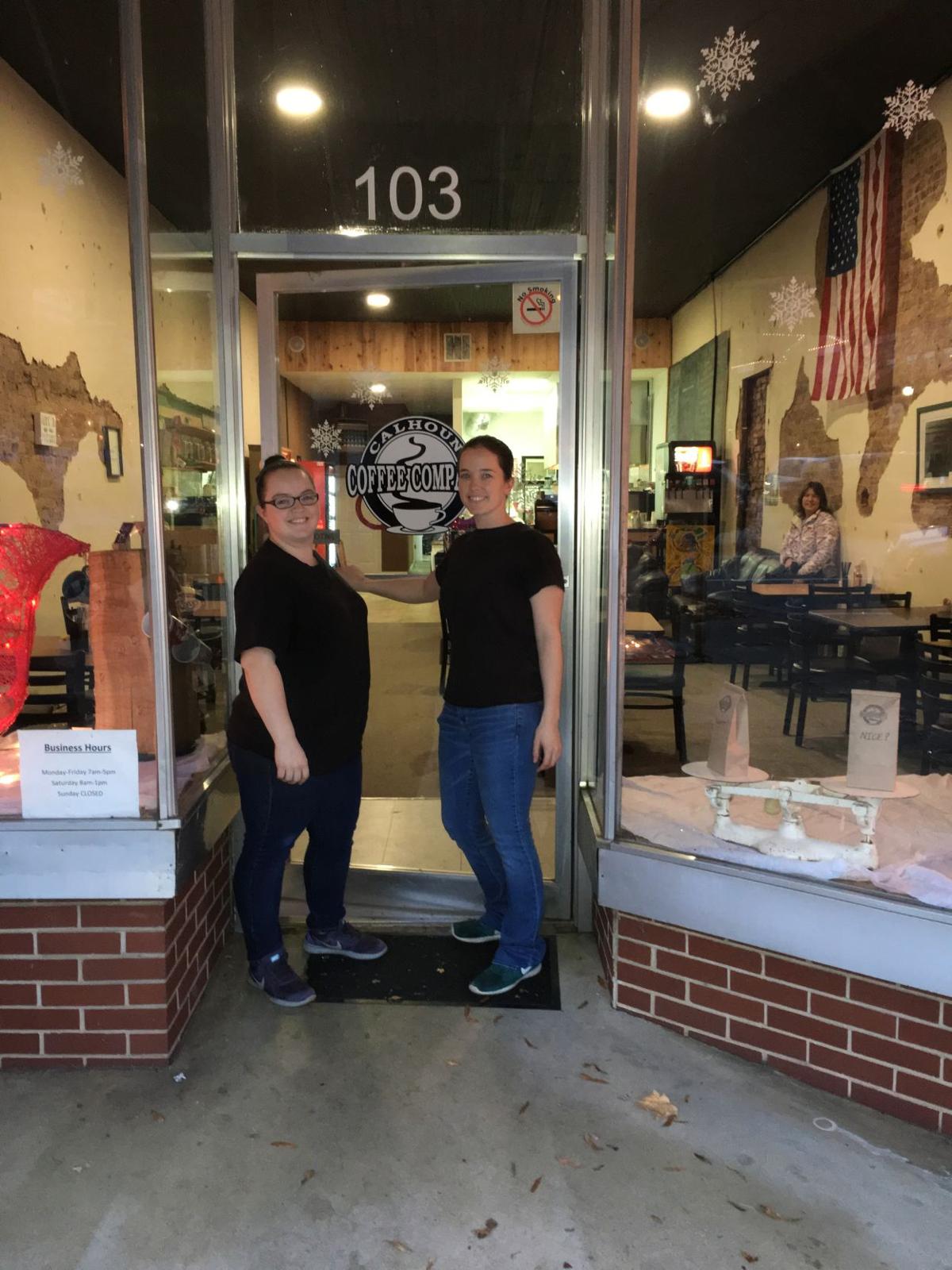 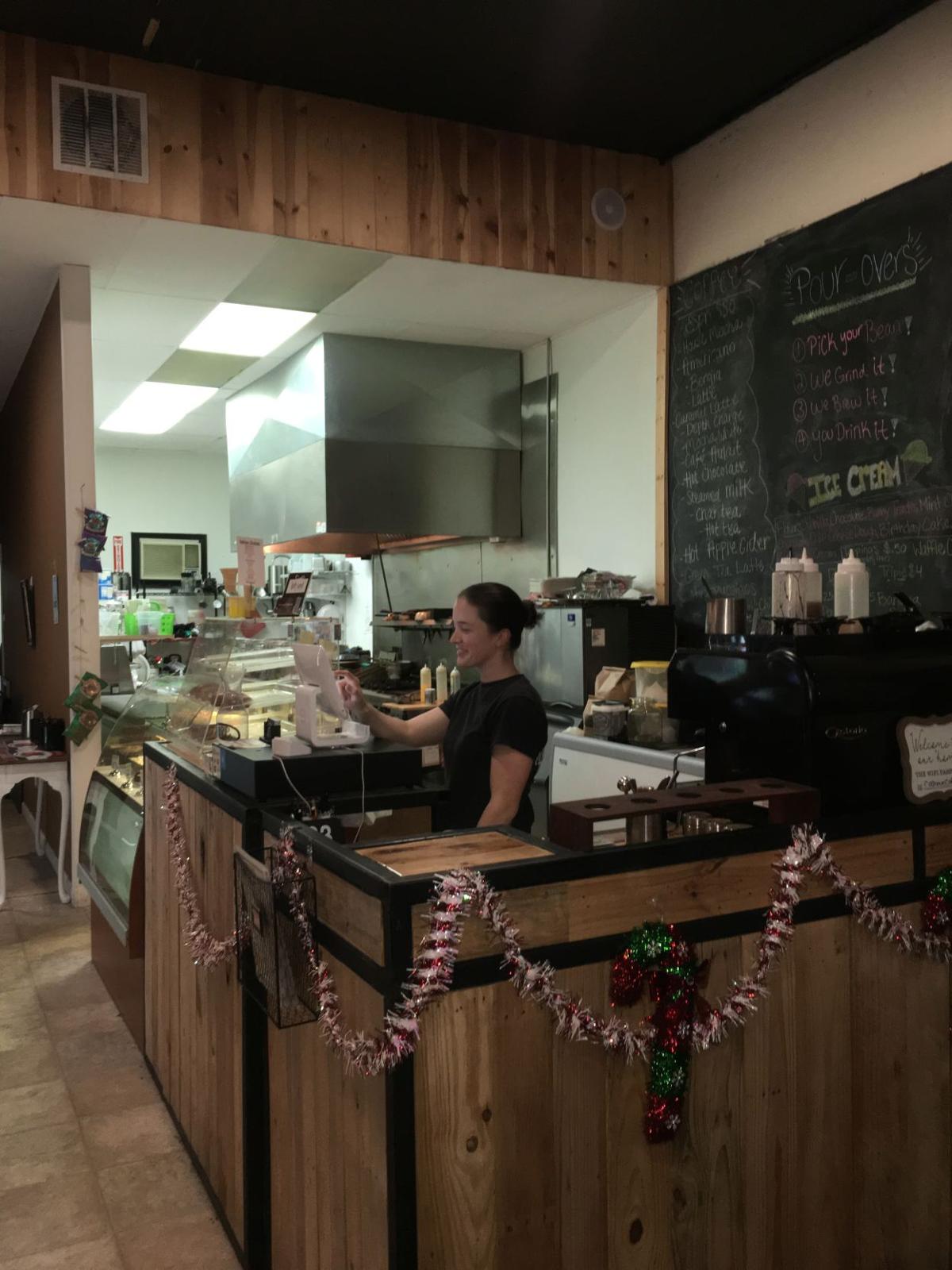 Meagan Bennett works the cash register at the restaurant she runs with her sister, Katelynn Marshall. Bennett’s usual spot is in the kitchen at the grill working on lunch or breakfast orders, however. / Liz Crumbly 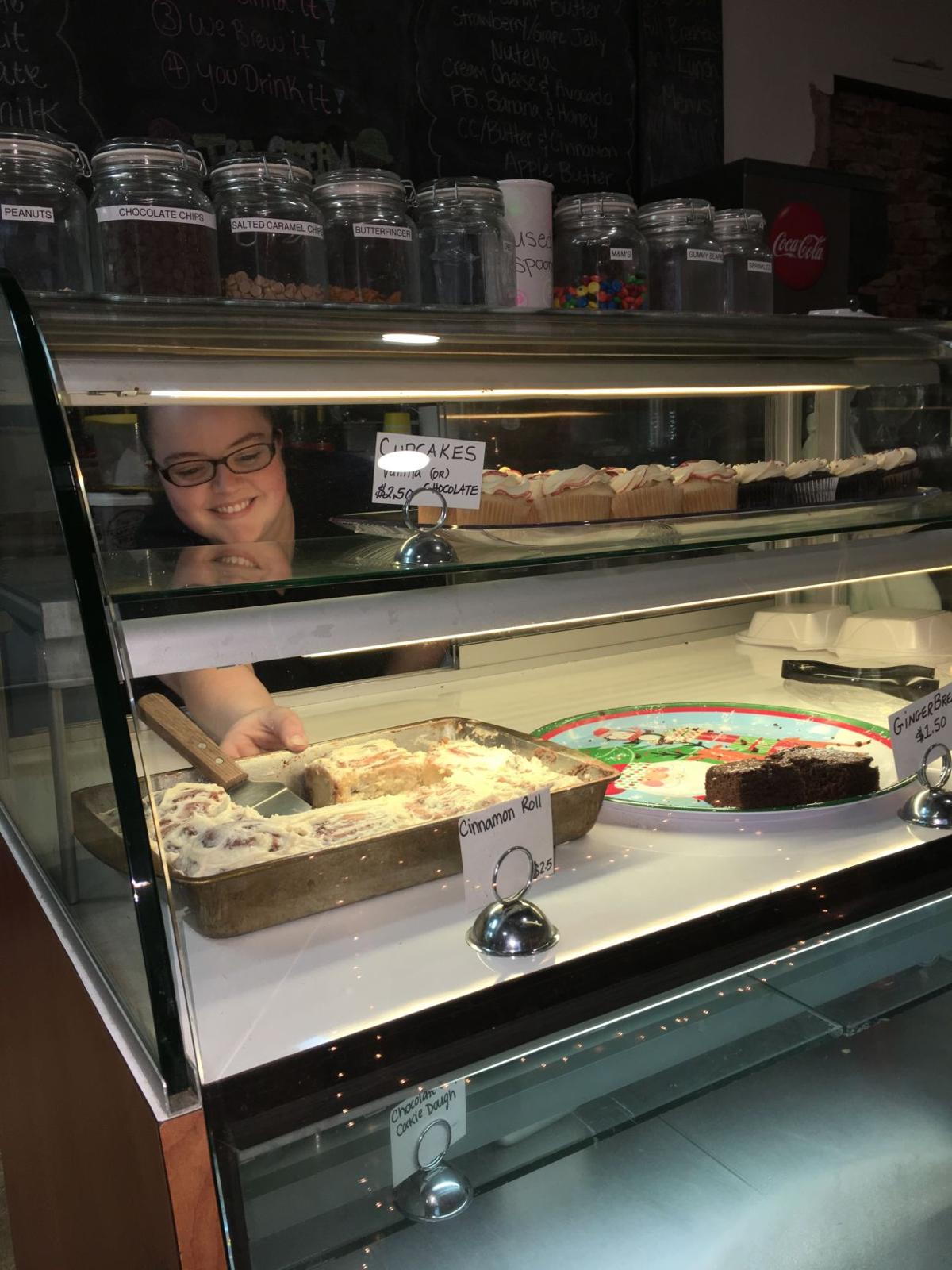 Katelynn Marshall slides a tray of freshly baked cinnamon buns out of the case. She handles all of the baking at the restaurant, Calhoun Coffee Co. / Liz Crumbly 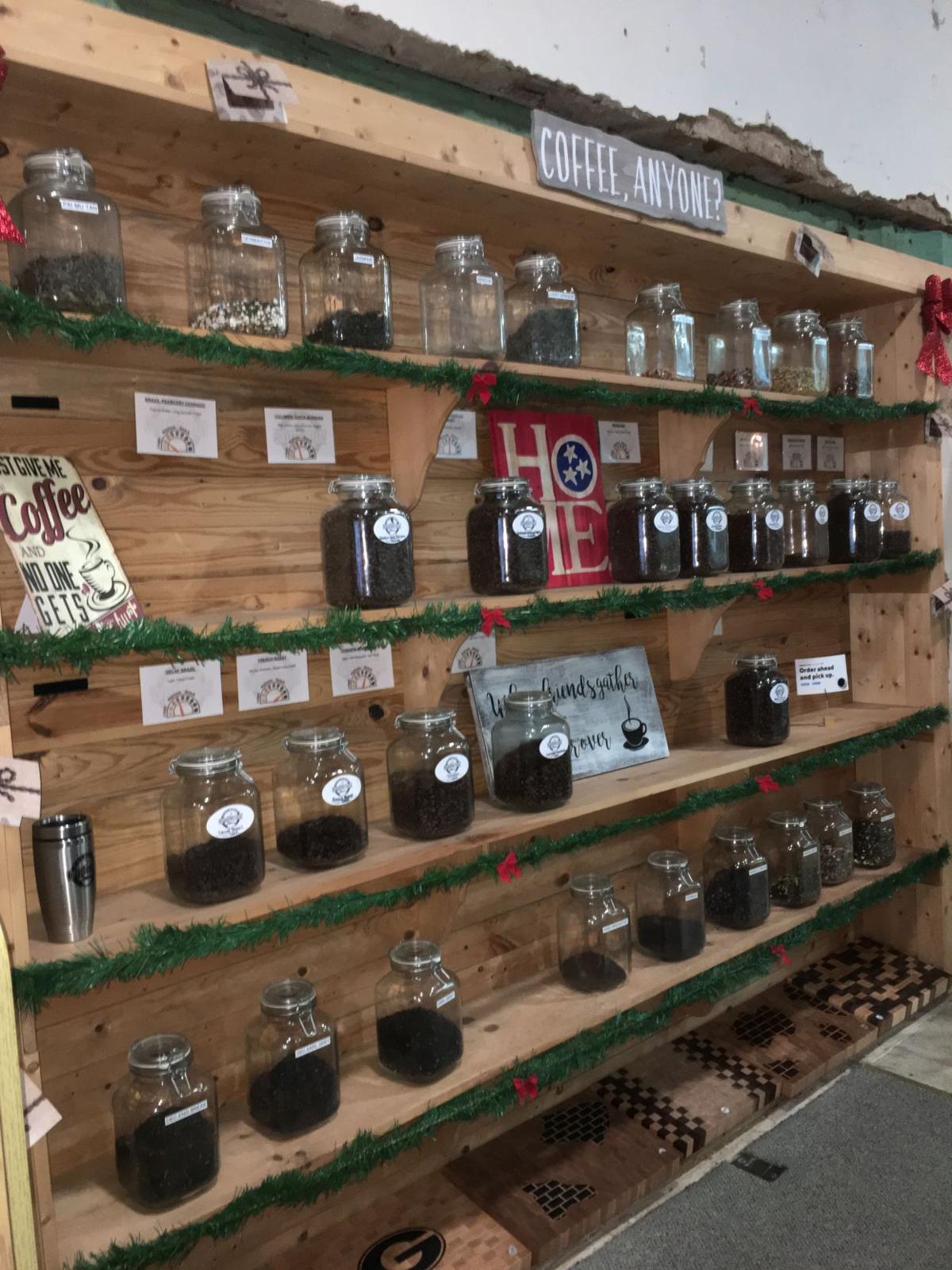 The coffee offerings at Calhoun Coffee Co. range from light to dark, and there are loose teas available for those who prefer that instead. / Liz Crumbly 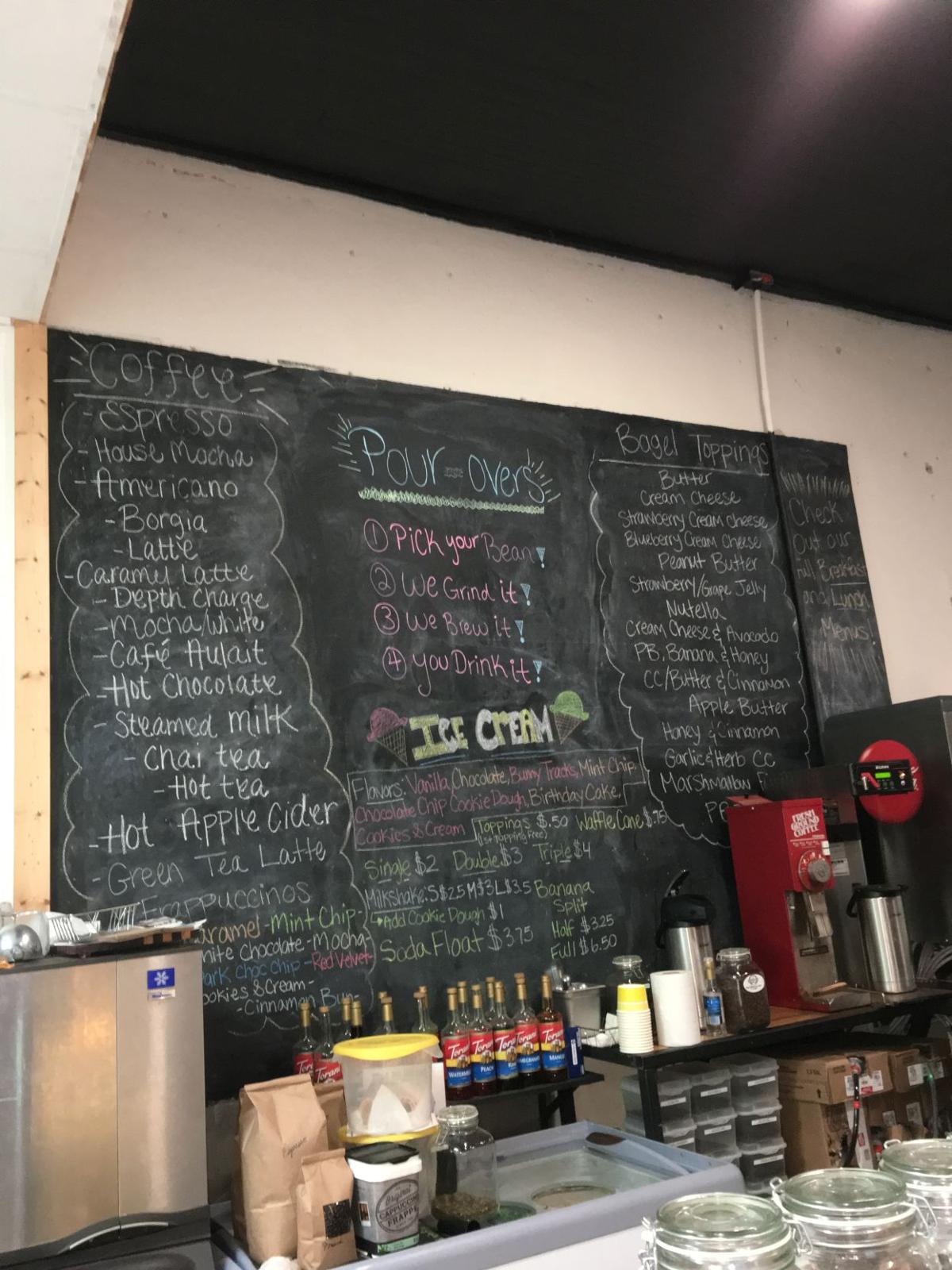 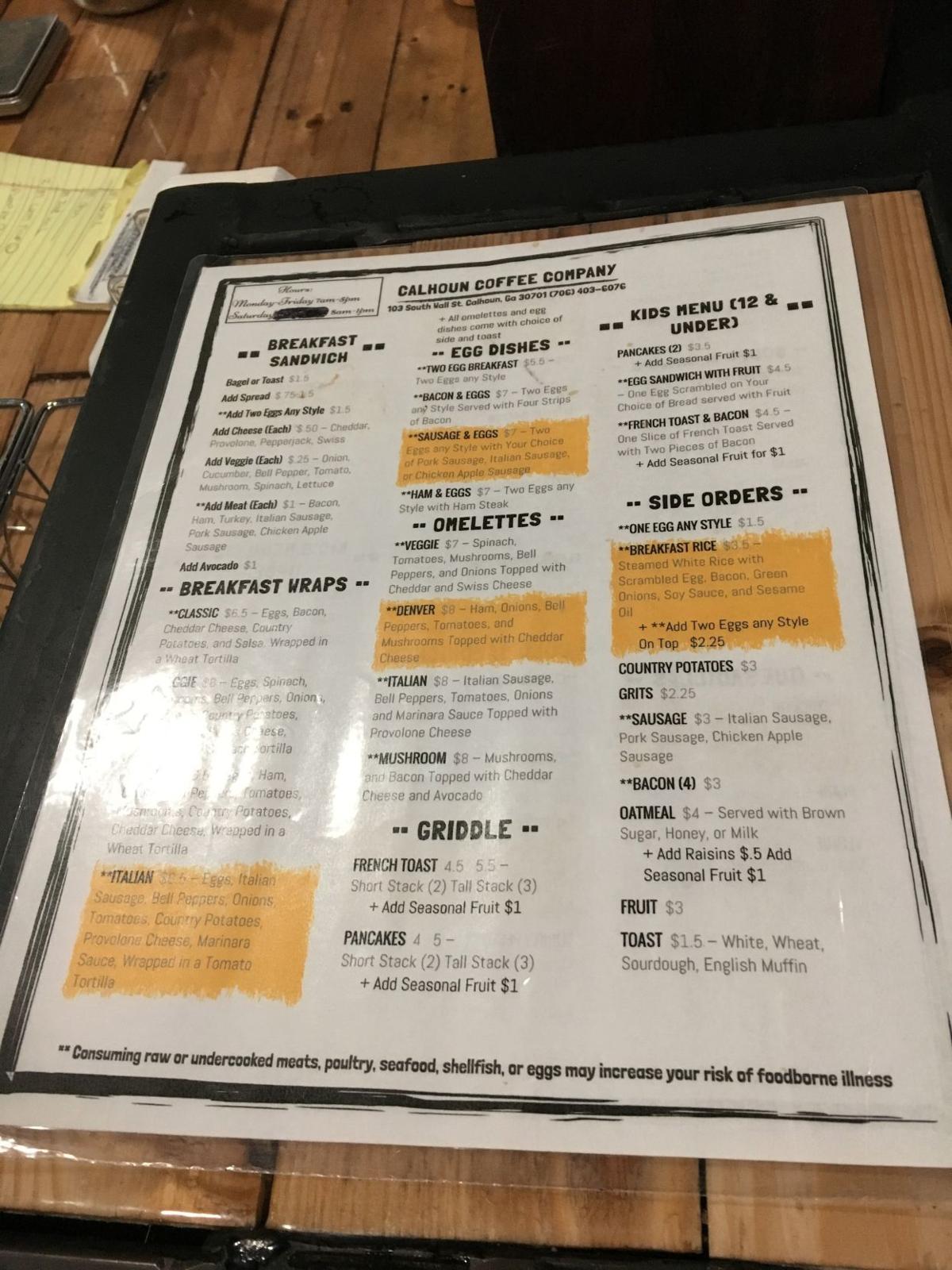 The menu at the Calhoun Coffee Co. includes a full range of breakfast and lunch options. / Liz Crumbly 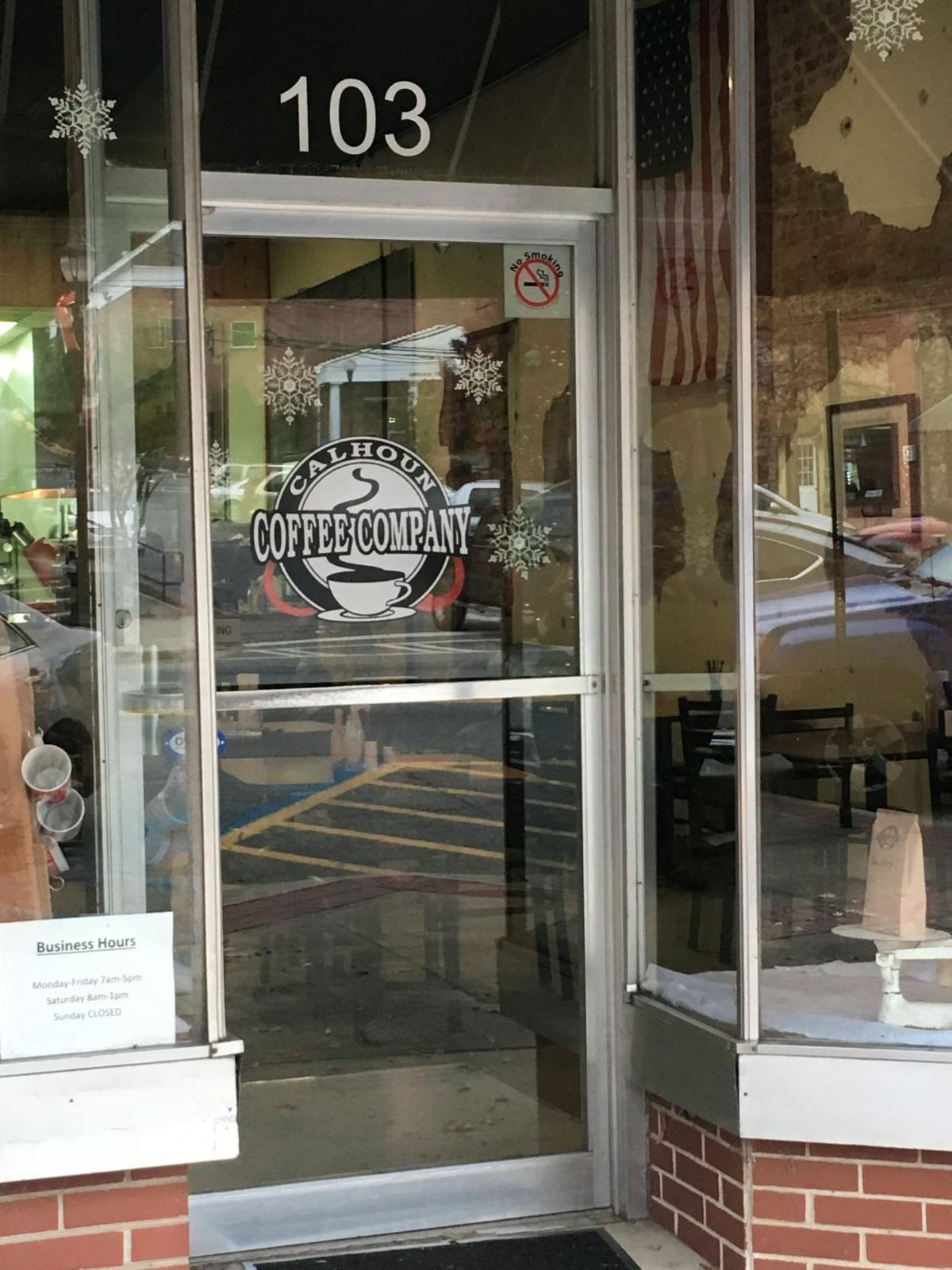 Meagan Bennett works the cash register at the restaurant she runs with her sister, Katelynn Marshall. Bennett’s usual spot is in the kitchen at the grill working on lunch or breakfast orders, however. / Liz Crumbly

Katelynn Marshall slides a tray of freshly baked cinnamon buns out of the case. She handles all of the baking at the restaurant, Calhoun Coffee Co. / Liz Crumbly

The coffee offerings at Calhoun Coffee Co. range from light to dark, and there are loose teas available for those who prefer that instead. / Liz Crumbly

The menu at the Calhoun Coffee Co. includes a full range of breakfast and lunch options. / Liz Crumbly

A growing number of Calhoun residents are enjoying the taste of fried rice and soy sauce for breakfast. This occurrence is thanks to sisters Meagan Bennett and Katelynn Marshall who own the Calhoun Coffee Co. on Wall Street.

“We’ve actually, I think, made quite the mark with our breakfast rice. That is by far the most popular thing that we sell,” Bennett says. “It’s like a breakfast fried rice … white rice with scrambled eggs mixed with soy sauce and sesame oil, green onions and then topped with bacon. It’s really good. It’s something that you can’t find anywhere else, and that’s kind of our signature.”

Bennett, 29, works the grill, while Marshall, 24, handles the baked goods and the cash register at the laid-back restaurant at 103 S. Wall St. in downtown Calhoun. Other popular specialties include edible cookie dough, freshly-baked cinnamon rolls and chicken salad. The sisters brought most of the recipes for their baked goods with them when they moved here from Half Moon Bay, California. They had both worked at times in the family coffee shop there, and they opted to continue marketing those recipes here.

“A lot of them are family recipes,” Marshall says. “The gingerbread we have in the case now is our great-great grandmother’s recipe. A lot of the stuff we served at our other place, but a lot of those stemmed from family recipes.”

Getting into the business

The coffee business is somewhat of a departure for both sisters compared to their other pursuits. Bennett was in the Air Force Security Forces before coming to Calhoun.

“After having my daughter, I just kind of decided that wasn’t something I wanted to do in civilian life,” she says.

Marshall worked as a swim instructor for kids while also baking in the California shop. The Calhoun store has allowed her to develop her customer service skills.

“I didn’t deal with people a lot,” she says. “I was very shy — extremely. This place, truly has helped me come out of that shell … It’s like night and day.”

Their introduction to the restaurant business came early as they helped their aunt and uncle run the coffee shop in the small town of Half Moon Bay.

“There was no Starbucks then, and our town really did need a coffee shop,” Bennett says. “We started off really small … We worked there from a young age. I used to stand on a milk crate to see over the counter.”

The shop actually began as a walk-up coffee bar that expanded to offer breakfast and a full lunch. Bennett developed an appreciation for good coffee and superior service early on.

“Just growing up in it, I think you have an appreciation for owning your own business serving something that people are really going to like,” she says. “And it’s also one of those things that isn’t going to be going out of style anytime soon. Coffee is a necessity for quite a few people.”

They’ve brought that work ethic and dedication to their own store here, which opened under their ownership in October 2016. The sisters do have two employees, but they make it a point to be at the shop during operating hours.

“Being in a small town, I just love having all the regulars,” Marshall says. “I always tell people, if we’re open, we’re going to be here.”

Despite the long hours, Bennett says being present is worth it.

“There’s a sense of quality that goes along with that,” she says. “I’m the one that’s always in the kitchen, so I know that I’ll never put out anything that I wouldn’t want to eat myself or serve … It’s a lot of work being here all the time that we’re open, but I wouldn’t really want it any other way.”

Customers tend to return, and some linger for hours on the shop’s overstuffed leather sofas using the free Wi-Fi. Tables set up around the long dining room sometimes house weekly business meetings. Hours are Monday through Friday, 7 a.m. to 5 p.m. and Saturdays 8 a.m. to 1 p.m.

Customers can order breakfast all day, and there’s a full lunch menu. There are discounts for students, teachers, military personnel and public service workers. The sisters have put a lot of work into the building including ornamental brickwork on the interior walls.

“We have a very old building. It’s a historical building,” Marshall says. “A lot of work went into the inside. The brick was all done by us. It used to be sheet rock — this awful yellow color — and a dropped ceiling all the way to the door. It was like an office.”

They took out a large part of the dropped ceiling in the dining room, and they painted the revealed portion black. This process was all part of a facelift of sorts for the shop, which began after Bennett and Marshall bought it. They kept the name but began revamping the menu offerings.

“We weren’t doing a full breakfast and lunch,” Marshall says. “We were strictly doing bagels and pastries, coffee and paninis. It just was not working. We sat down and we said, ‘Yeah, we need to put the full menu in here.’ So we bought the range … it took a bit for people to realize we were here.”

The investment has finally begun to pay off, and regulars sometimes line up across the dining room to get a bagel breakfast sandwich or mushroom omelet.

“When we first started, it was just us, and we didn’t know if we were going to get busy enough or grow enough, and now we have a full-time employee and another girl who works with us part time. Most days, we can honestly use even another person or two, so that’s kind of cool,” Bennett says.

“I think about those months ago when we were like, ‘Do we need to sell this place?’ and looking at it now, it’s great,” she says. “I’m truly humbled that the town has accepted us the way they have. We have days when the line is to the door, and it’s great. You feel so humbled.”

‘You can’t get a fresher cup of coffee’

One of the shop’s draws is the fact that the beans are locally sourced.

“Our beans that we get come from a local roaster in Adairsville, and we also get quite a few of our beans from Jittery Joe’s in Athens, so they’re all fairly local,” Bennett says. “I like being able to support other local businesses.”

The coffee is all brewed pour-over style, another unique feature.

“What that means is that we weigh out our coffee according to the cup, and we brew it specifically for that cup,” she says. “So you can’t get a fresher cup of coffee. and it’s all laid out, so you’re getting the right amount per cup as well. It takes a couple more minutes and than just pumping it out of an air pot, but the taste is a lot better. People seem to really enjoy that … that’s kind of what we’re known for.”

Available roasts run the gamut from light to dark, and there are also about 20 varieties of teas to choose from, some of which are loose.

As they look to the future, the possibility of another shop isn’t out of the question, but the sisters don’t take the prospect lightly.

“We wouldn’t be opposed to it,” Bennett says. “It’s one of those things that’s kind of a scary thing when you have so much control over the one that you have now, and you know if you were to branch out, you wouldn’t necessarily be able to be in both places at the same time. But there are times when we definitely could use a bigger spot. We run out of seats during lunch.

“I don’t think we would ever want to close this one. If anything, I think we would want to expand on top of this spot and then open up another. Where? I don’t really know … We just really love our location.”

Marshall emphasizes the pride she feels in the product and experience they offer.

“We’ve gotten nothing but positive feedback, and you just feel so special,” she says. “All the work we put in — it’s finally paying off. It’s been great. We’ve been very busy … This is our baby.”

“I think about those months ago when we were like, ‘Do we need to sell this place?’ And looking at it now, it's great. I'm truly humbled that the town has accepted us the way they have. We have days when the line is to the door, and it's great. You feel so humbled.