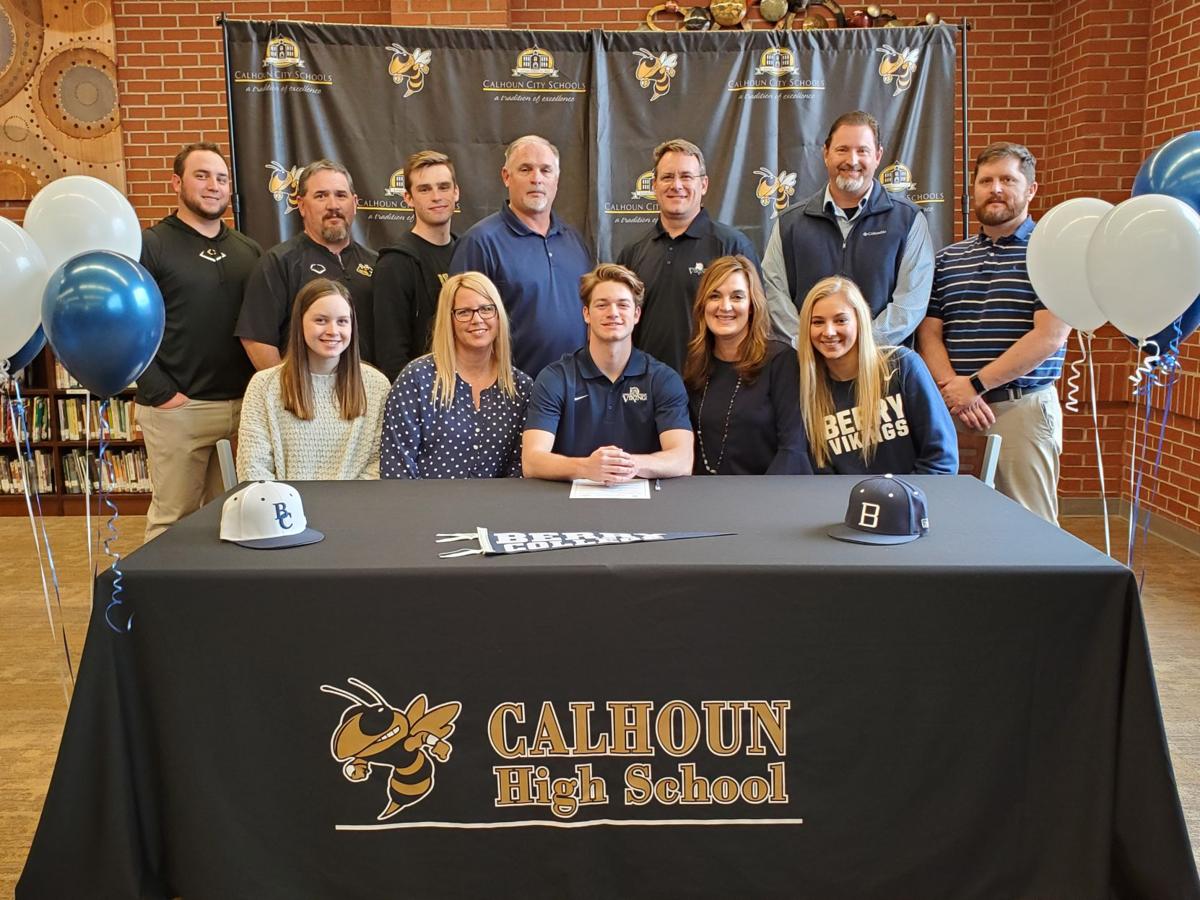 Calhoun senior Ethan Crump poses for a picture with family and coaches at his signing ceremony at Calhoun High School on Friday, Feb. 28. 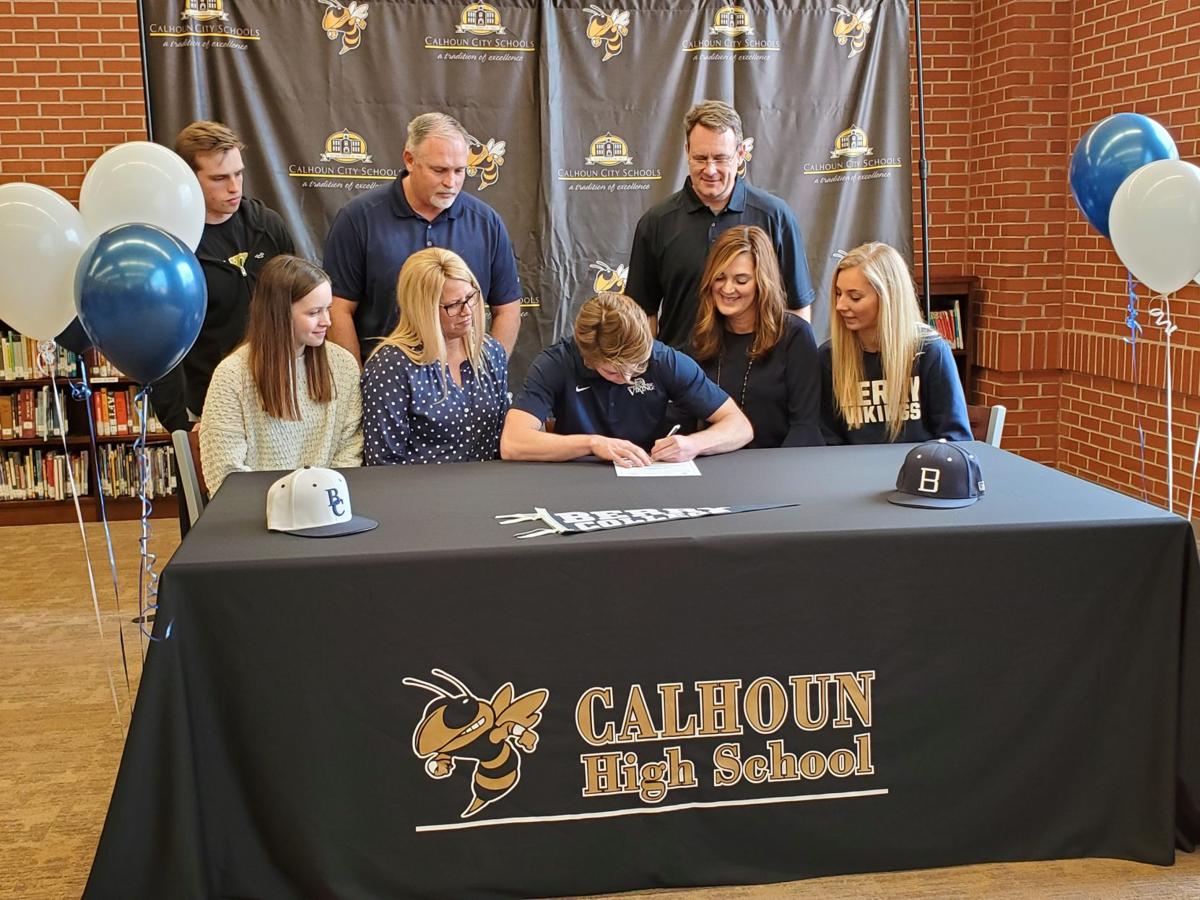 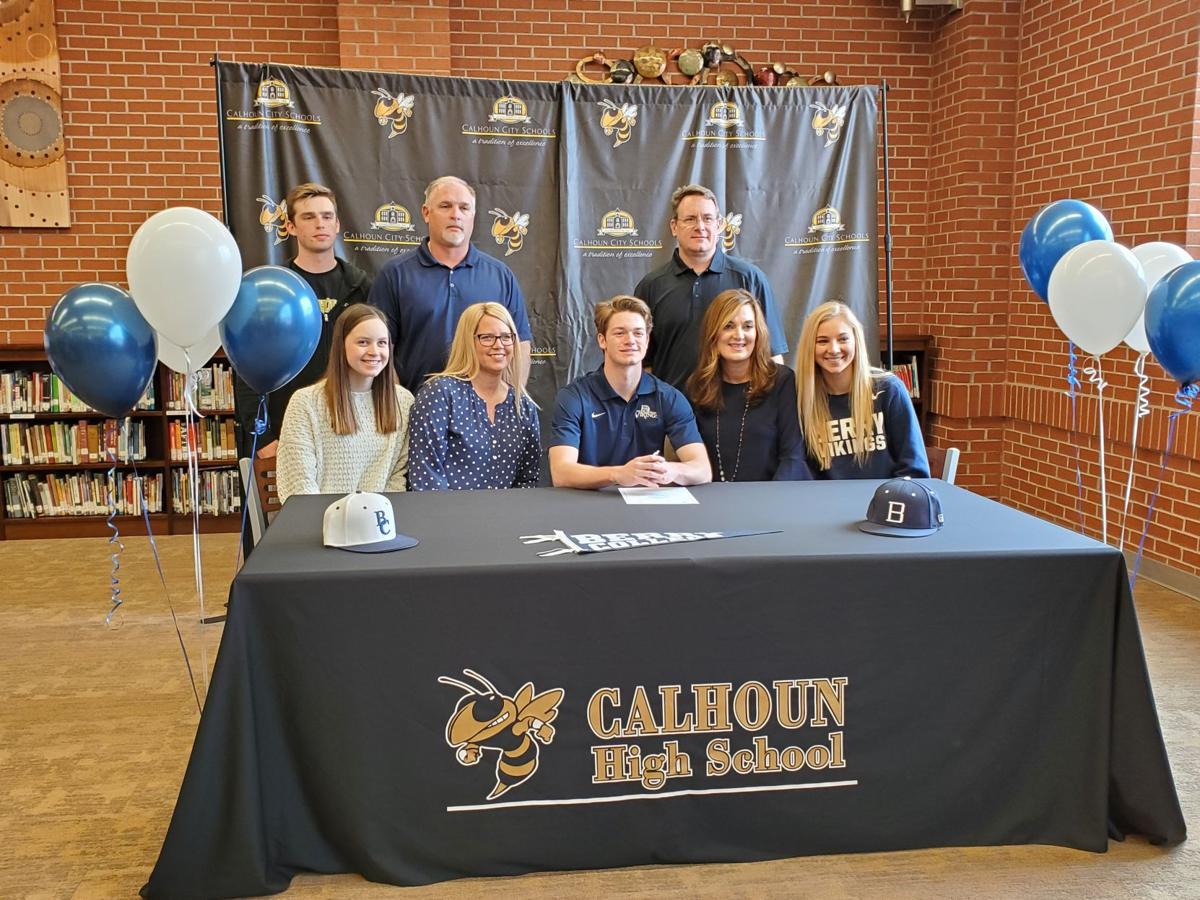 Calhoun senior Ethan Crump poses for a picture with his family at a signing ceremony at Calhoun High School on Friday, Feb. 28.

Calhoun senior Ethan Crump poses for a picture with family and coaches at his signing ceremony at Calhoun High School on Friday, Feb. 28.

Calhoun senior Ethan Crump poses for a picture with his family at a signing ceremony at Calhoun High School on Friday, Feb. 28.

Ethan Crump has officially signed to the next level, and he’ll be heading off about 30 minutes south on Georgia Route 53.

Crump said he signed with Berry College because he not only sought a solid baseball program, but also an academically-driven college. A locale that would not just be referred to as a college, but a home as well.

“My plan was always to look for a good school,” Crump said. “Not just good baseball, but a place I can call home and a place that will still be affecting me 30 years down the road.”

Throughout his varsity baseball career, Crump has been coached by Chip Henderson, now in his 26th year with the program.

Henderson noted Crump’s consistency on and off the field.

“Some of the things that don’t show up in the score book, such as showing up to practice on time, going all-out on all the drills,” Henderson said. “He doesn’t know but one speed and that’s all-out. He’s a great teammate. He’s great leader. He’s a coach’s delight.”

“As far as inside the lines, he’s really kind of come into his own,” Henderson said. “I’m sure he’s got to make our pitchers feel comfortable because anything in the air and he can get to it, he’s going to catch. Offensively, he’s got some pop. One thing I think that he does well is he utilizes his speed and he’ll get half a dozen or so bunt hits a year.”

Crump said the biggest thing he took away from the recruitment process was patience, as it can be a stressful time for many student-athletes.

“Good things work out for good people,” Crump said. “If you just do the right thing, don’t get caught up in social media stuff and who’s going where. If you work hard and deserve to be somewhere, you’ll find the right place. It took me four years to learn it, but I learned it.”

In his time with the program, Henderson has seen many go on to next level. Henderson said Berry is getting a “diamond in the rough” in Crump.

“I don’t think he’s even scratched his baseball ability yet or his talent,” Henderson said. “I think there’s still a lot in there to foster and to grow, but I’m excited for him. I hate that it’s his senior year for us, but we’re looking for big things out of him this year ... as we move forward.”

When Crump had made up his mind on where he wanted to spend his collegiate years, he made a phone call to his parents.

“When I called my parents and told them, they were happier than I was so I know I made the right choice,” Crump said.

Henderson said the journey to the collegiate athletics stage is something that takes assistance from multiple individuals.

“You can’t get to the next level by yourself, but you just look at the turnout,” Henderson said, gesturing to the people gathered. “Family, friends, teammates, coaches ... it’s just a win-win-win situation all the way around. To be able to go and play at the next level and just to think I had just a little bit, just a little bit of something to do with it, it’s a joy to me.”

Crump has played both football and baseball for the Yellow Jackets, and is currently in the midst of his senior season with Calhoun Baseball. As of this writing, the Jackets currently own a 5-0 record and face Fannin County in a doubleheader leap-day February finale.

“I think this team is really something special,” Crump said on the 2020 Yellow Jackets. “Chemistry is off the charts. I want to stop and smell the roses ... (and) have fun with these guys and just go wherever it takes us.”

With his signing complete, Crump said now all attention turns to 2020 Calhoun Baseball. Crump added he would miss his friends and teammates.

“I’ve got a lot of good friends here at Calhoun,” Crump said. “We just hang out all the time and do everything together. It’s going to be hard to leave those guys, but just making new friends and having those good experiences for the next four years, that’s going to be fun and I can’t wait for it.”

Crump is now officially committed to collegiate baseball, having signed his scholarship. He said he doesn’t know if the feeling will ever quite set in.

“I’ve always dreamed of doing stuff like this,” Crump said. “I put a note card on my dresser when I was little just saying I promise myself I will make it, make the next level and play college baseball. It’s always something you see other people doing and you just dream of and just work hard. To be like finally there, it’s crazy. I still can’t believe it.”