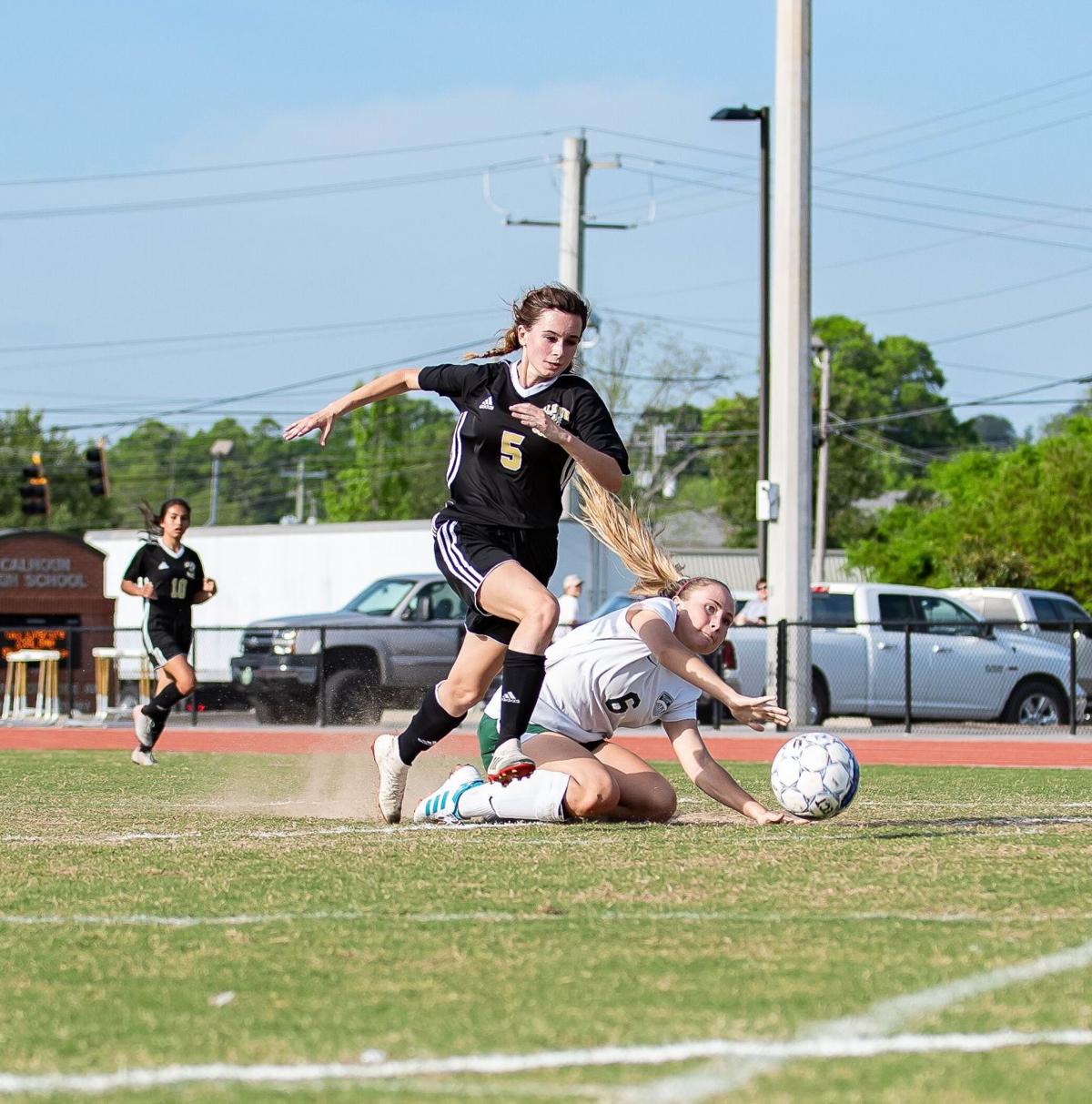 Hannah Dimeler charges with the ball toward the opposing goal during Calhoun’s first-round playoff game vs. North Hall on Tuesday. The Lady Jackets won the game 2-0. 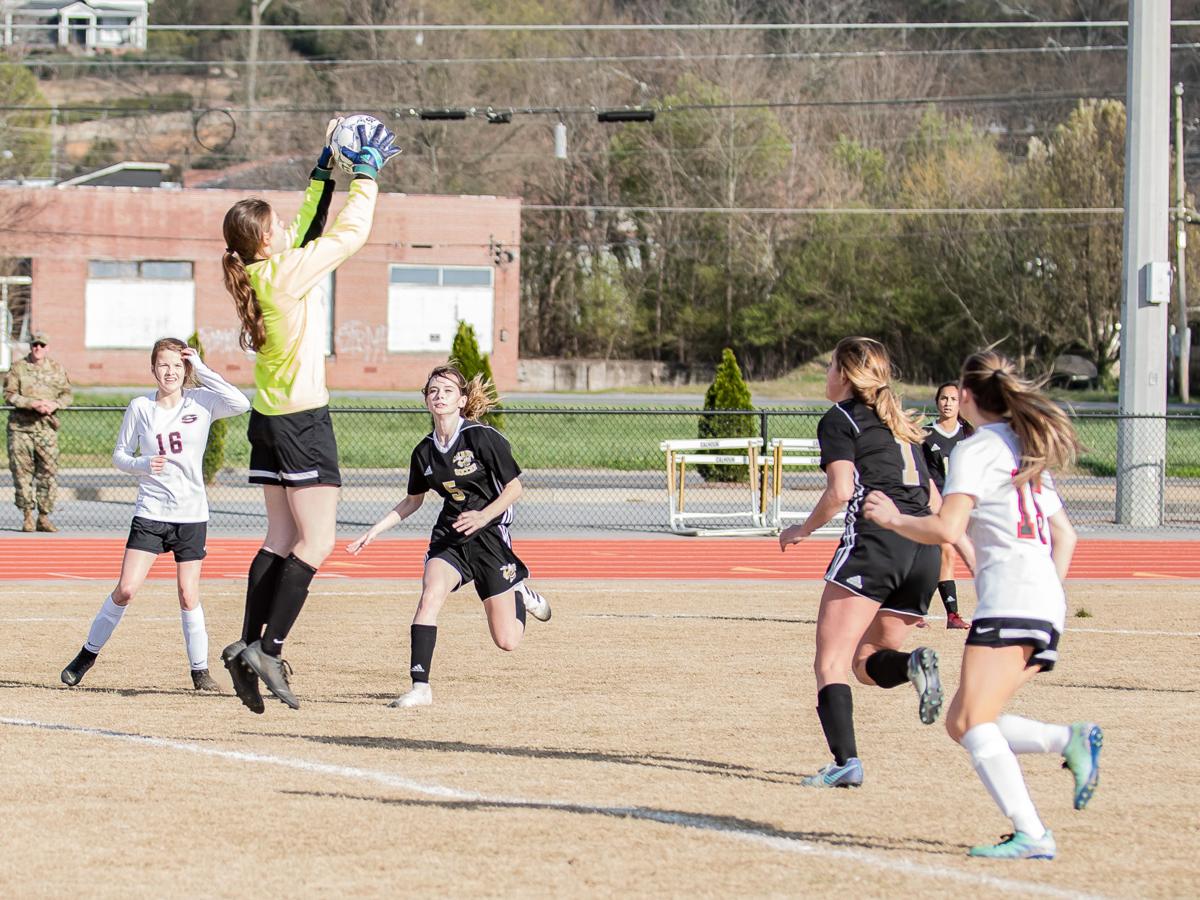 The Sonoraville Lady Phoenix beat Calhoun 1-0 in a tightly-contested game back on March 21.

Hannah Dimeler charges with the ball toward the opposing goal during Calhoun’s first-round playoff game vs. North Hall on Tuesday. The Lady Jackets won the game 2-0.

The Sonoraville Lady Phoenix beat Calhoun 1-0 in a tightly-contested game back on March 21.

We might just be turning the calendar from January to February, but another season of Lady Jackets soccer is already upon us.

Third-year head coach Taylor Sumrall leads the Lady Jackets into 2020, which will be the team’s final year in Class AAA.

Last season, Calhoun finished with a record of 12-4 with a 7-1 region mark. The Lady Jackets won the region title and advanced to the second round of the state playoffs. Lovett eliminated the Jackets 6-0 at Calhoun High School last May.

“It’s always hard to repeat, but considering how much we lost and how much we’re starting over, it’s easier to not have that focus on repeat,” Sumrall said. “As many people as we have stepping up, they’ll be more concentrated on making sure they fill their roles well and not just focused on the region championship. Of course, it’s always a goal. We expect to be competing for it and expect to win it every year, but I think, mentally, it will be a little bit easier to convince the girls to win it rather than having to take a whole team that won it last year and start them over again.”

“The girls are working hard and I’m pleased with their effort and ability so far,” Sumrall said on preseason practice. “We have a lot of talent, but the experience may not be there. It’s not necessarily rebuilding as much as it is reloading and working in new players.”

With a good amount of that experience gone, Sumrall said the group’s chemistry is relatively strong, due to many of the players competing on travel soccer teams together.

“They at least know each other, they know how to play with each other ... all the girls get along pretty well,” Sumrall said. “I think that (chemistry) will be rebuilt pretty easily, it’s just we’ve got to take the time to do it.”

Sumrall said the senior presence will be felt in the midfield and in their leadership ability. Sumrall has had this particular senior group since they were in eighth grade at Calhoun Middle School.

“The seniors we have are vocal leaders and they keep everybody in line,” Sumrall said. “They know how I want things run and how we expect things to be run at practice and game-wise. They’re good ones to trust and I’m looking forward to working with them one last time.”

Sumrall said he is most excited about the team’s attitude, describing his squad as a “quirky” group.

“They like to joke around and mess around and all that stuff and I’m more a serious ... type person, but they play well that way,” Sumrall said. “It’s going to be a fun year. In some aspects, for me personally, it’s going to be a frustrating year because it’s a different style to what I’m used to coaching. I think they’re going to have a good year.”

Looking at Calhoun’s schedule, Sumrall said the Lady Jackets have a difficult one. In addition to a challenging region, Calhoun will draw several top non-region opponents including Rome, Heritage (Ringgold), Northwest Whitfield and Dawson County.

“Our girls will get a lot of experience early in the non-region part, but as young as we are, it’s what we need,” Sumrall said. “They may get beat up on a little bit, but it will be good for them in the long run to get that experience. I hope they surprise me and I hope we stay strong the whole season, but I think experience-wise, that’s our biggest thing.”

The Lady Jackets will only play six of their 17 games away from Calhoun High School, giving fans a chance to check out a somewhat new-look girls soccer team.

“That helps a lot being able to play at home,” Sumrall said. “I’m just looking forward to a good year with a group of hard-working girls and seeing what we can do.”

One of Calhoun’s six road games is actually the 2020 season opener against cross-county rival Gordon Central on Monday, Feb. 3, at Ratner Stadium. Sumrall said he is looking forward to kicking off the year against a talented GC team, adding it will be an early test for his squad.

“With it being a rivalry game like this, the girls know each other, there’s no telling what’s going to happen,” Sumrall said. “I expect us to connect passes and move the ball downfield and communicate well. You take it one game at a time, you expect to get better every game. I expect us to play well that game, but then improve from there.”

Kickoff between the Lady Jackets and Lady Warriors is scheduled for 5 p.m.