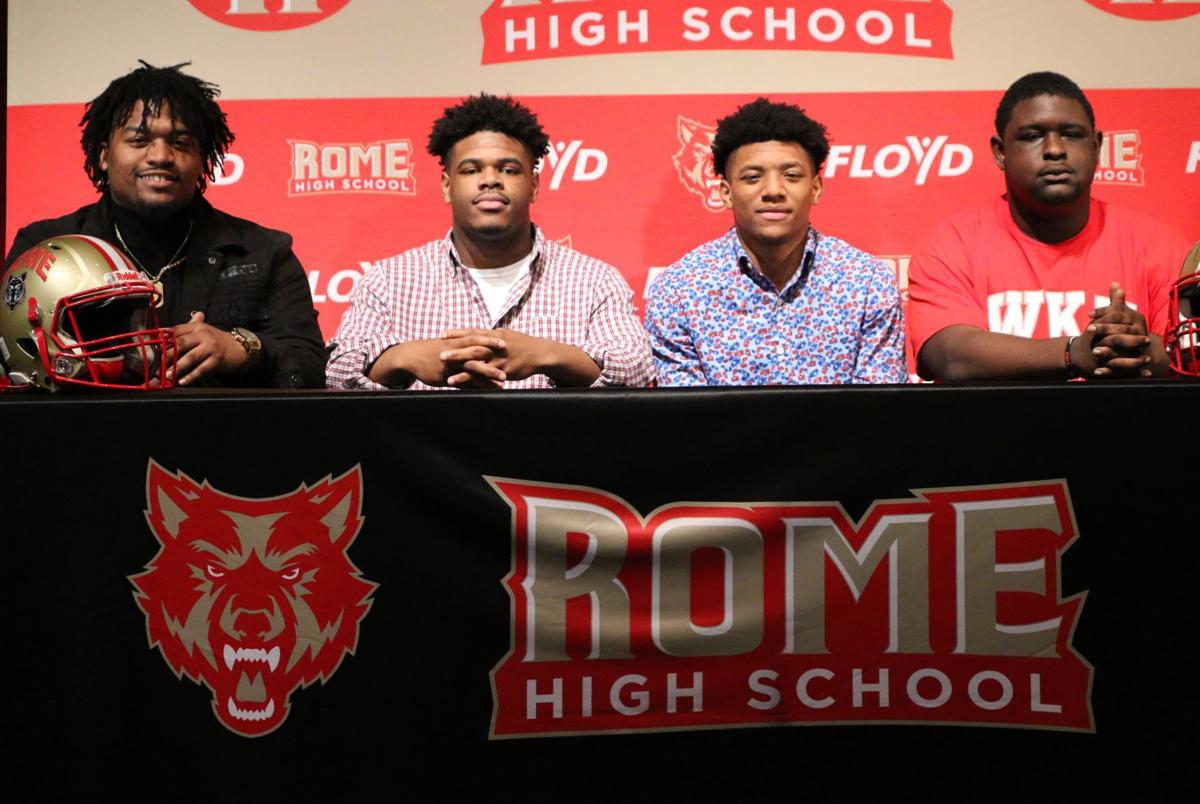 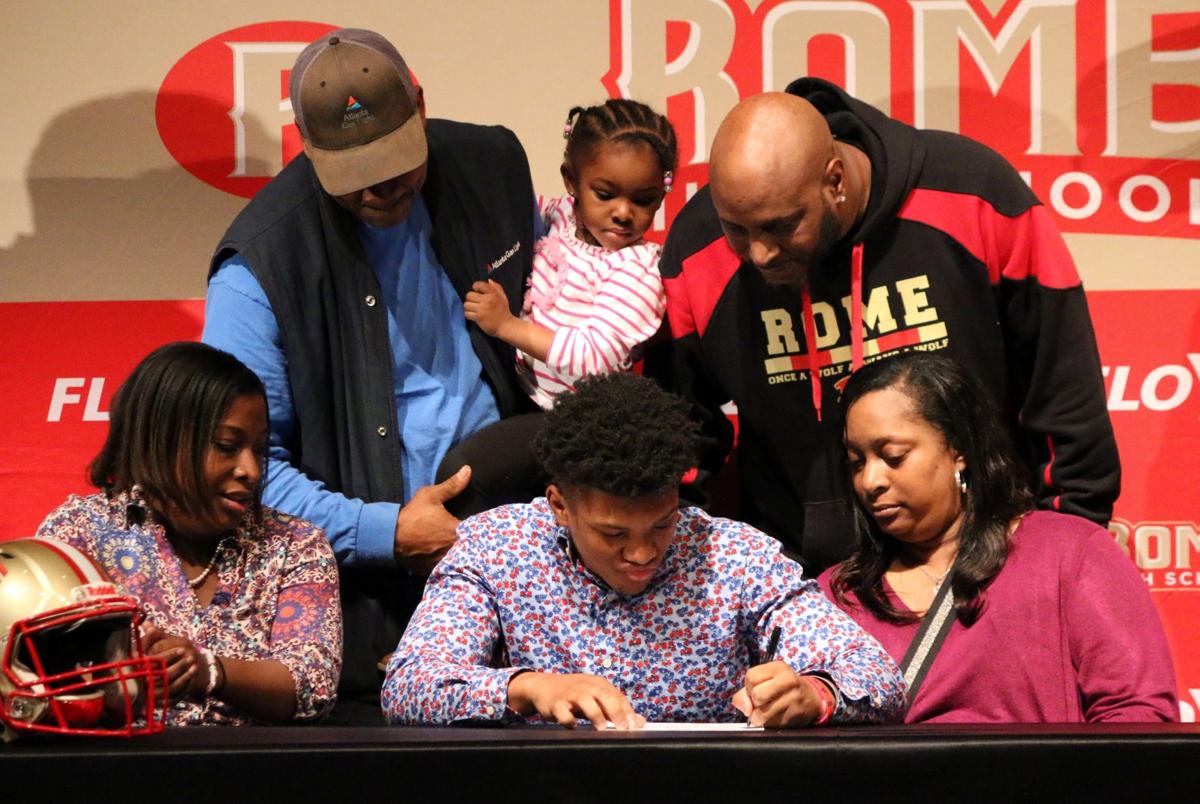 Rome High's Tim Jones Jr. signs his paperwork to attend Cumberland University on a football scholarship as his family watches him during a ceremony Wednesday at Rome High School. 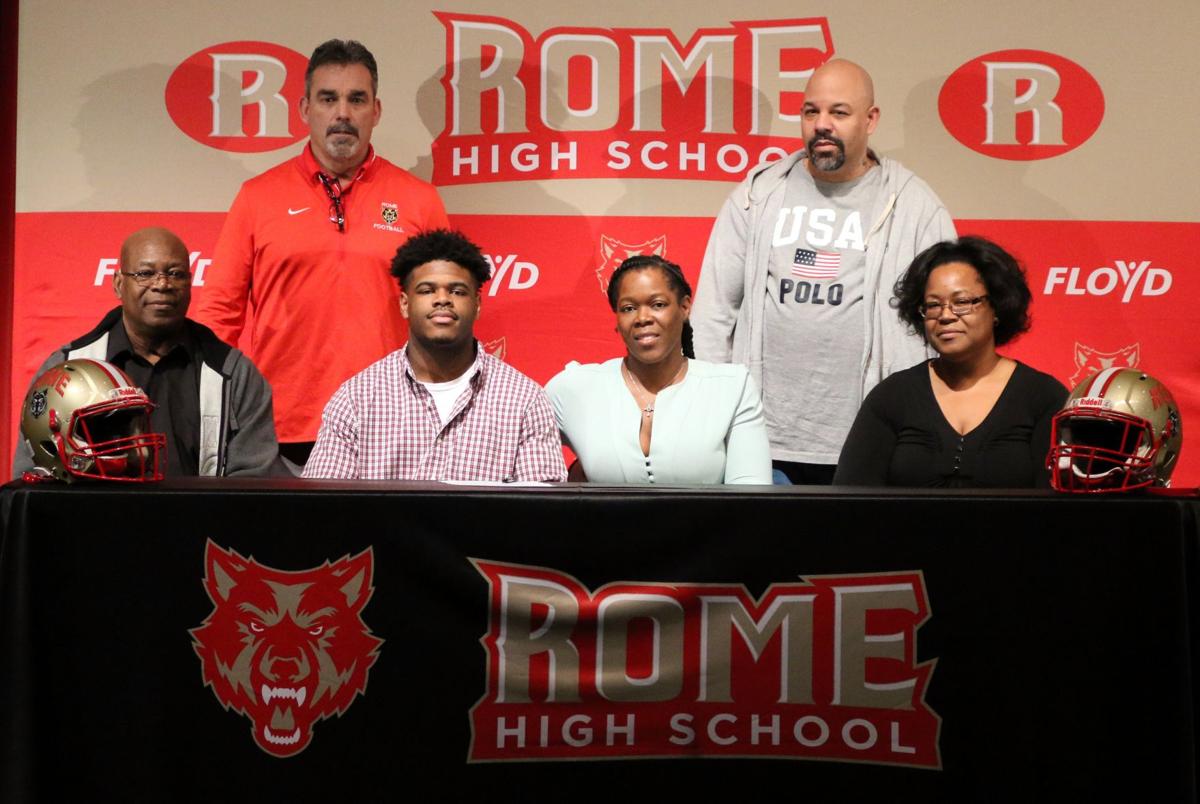 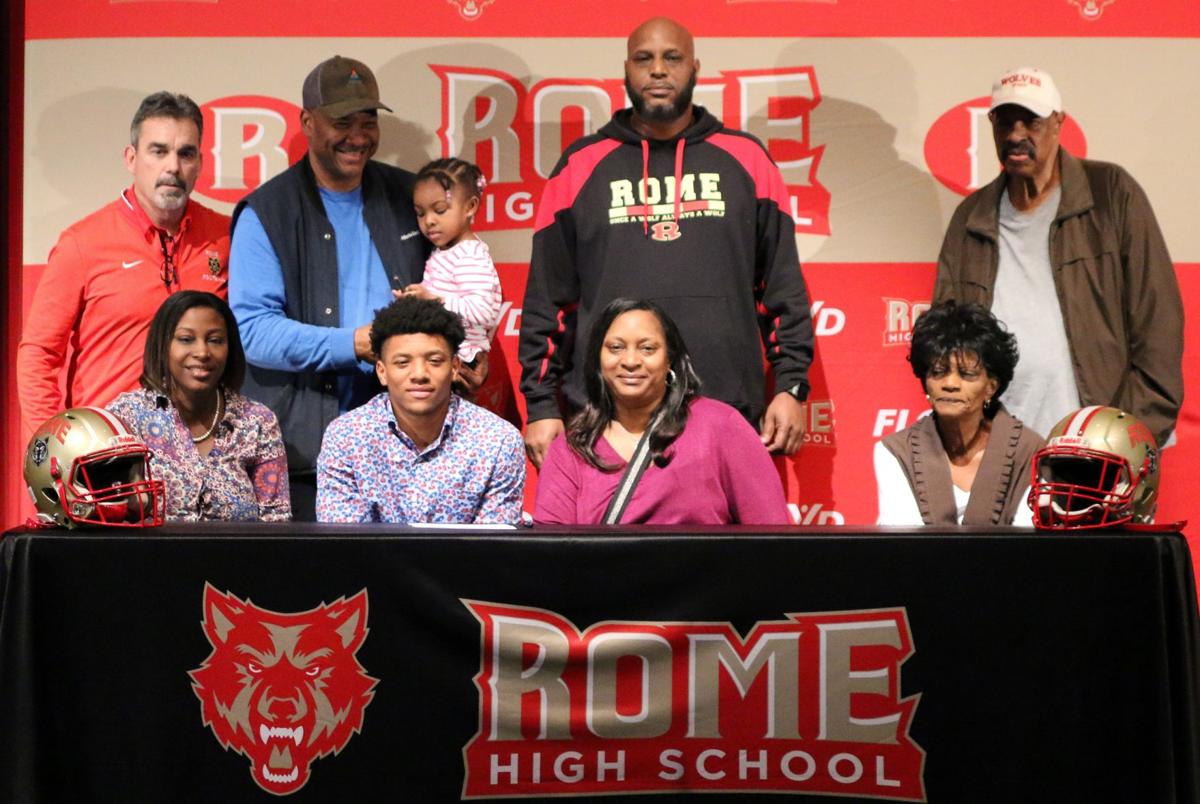 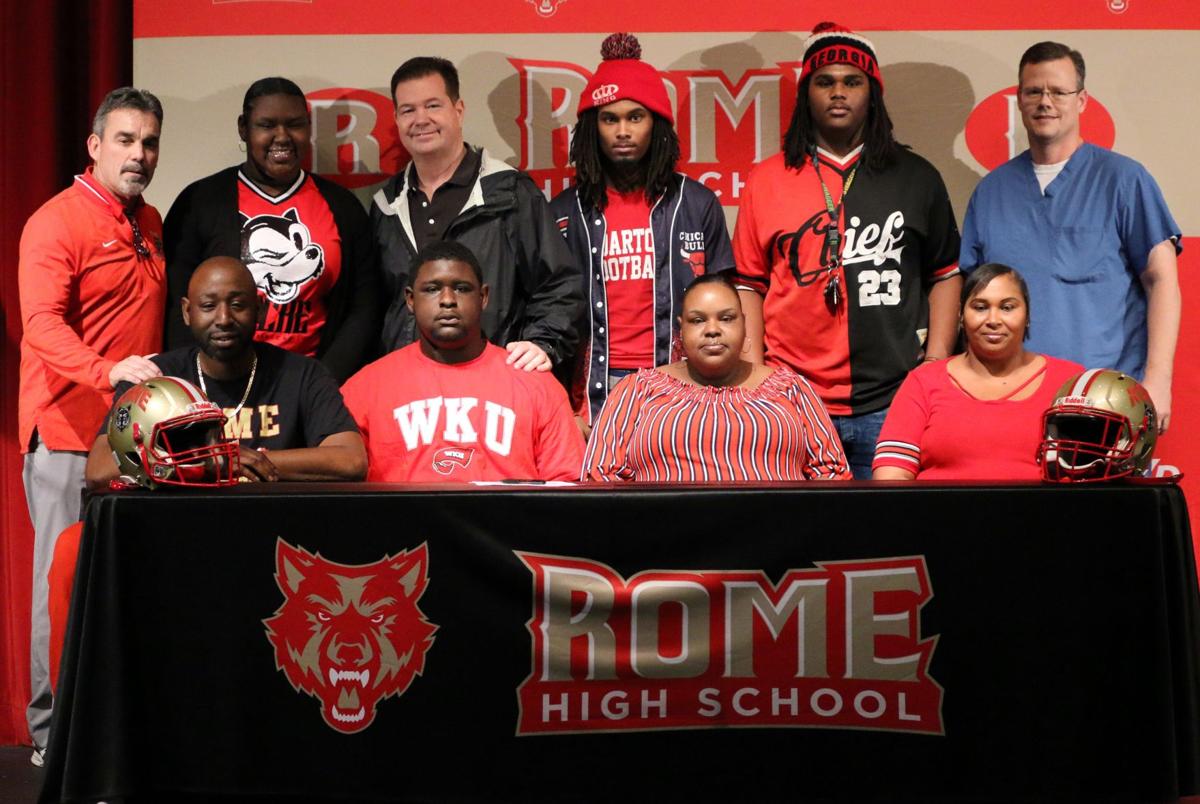 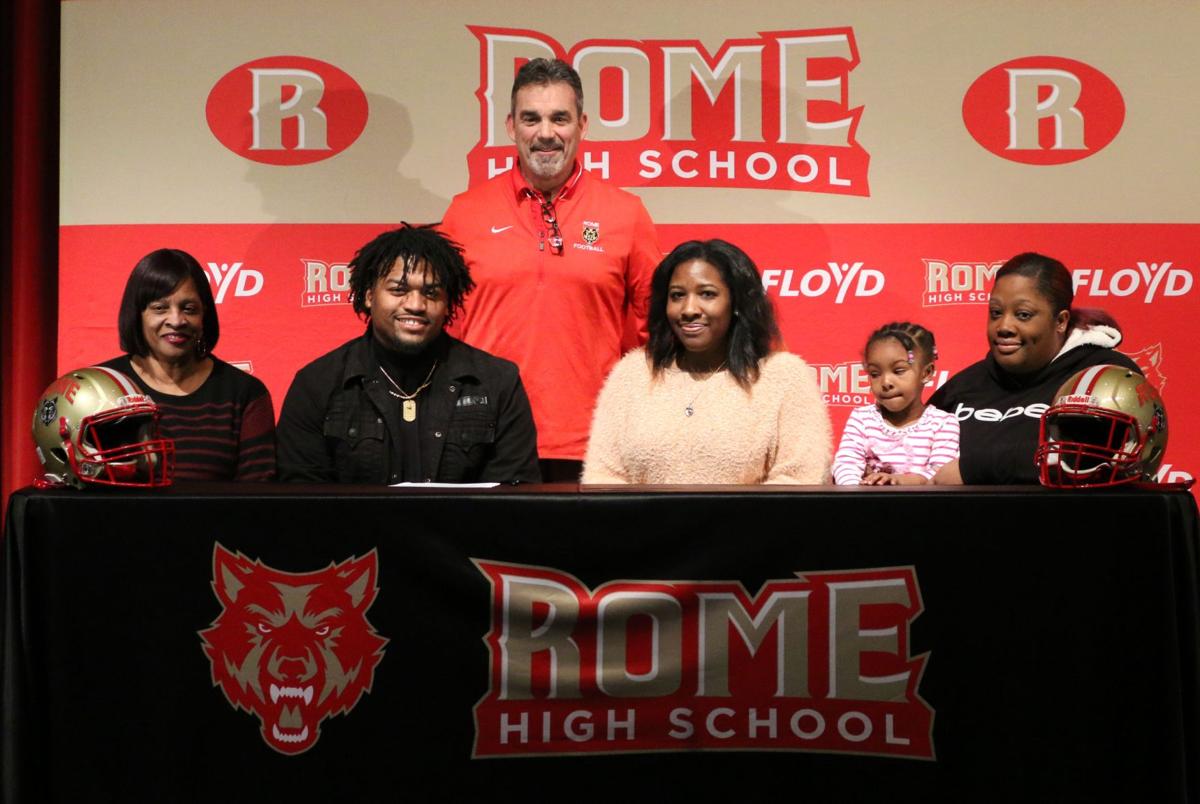 Rome High's Tim Jones Jr. signs his paperwork to attend Cumberland University on a football scholarship as his family watches him during a ceremony Wednesday at Rome High School.

The three players, along with teammate Quantavious Leslie, put their names on the dotted line Wednesday as they all signed to further their education and their careers on National Signing Day.

“It’s different,” Rome football coach John Reid said. “You win a game, it’s a team thing, but this is about the kid. They had great attendance, great attitude, great work ethic and they stayed out of trouble.”

Neal, a defensive tackle and captain for the Wolves who finished his senior year with three sacks, said he’s glad to be going off to college with who he called his family.

“My time here has really been great these four years,” Neal said. “I played for great teams — two of them won state championships. I just love being at Rome, but it’s time to move on and go up to Cumberland. I’m really excited about going up there with my family. I’m going to love being able to play at the next level with my family.”

Cumberland, an NAIA team that plays in the Mid-South Conference, is coached by former Shorter assistant football coach Tim Mathis.

Reid said Mathis has been wanting to add some Rome High players to his roster for a long time.

“He’s been after me for years,” Reid said Wednesday during a ceremony at Rome High School for the signees. “He says, ‘You’ve got to get me some Wolves up here.’ This year, we had three of them go up on a trip. I think they’re getting really a great group of kids.”

Jones, a defensive back, finished his senior year with 79 tackles and four interceptions for a Wolves’ defense that held opponents to 12.8 points per game.

Jones is also eager to be able to don a Phoenix uniform in the fall with his fellow Wolves’ players.

“It played a big role,” Jones said about his choice of college. “I wanted to stay with my teammates.”

Burge, a linebacker and captain for Rome, racked up 93 tackles, six for a loss, and two sacks this past season for the Wolves, however Burge isn’t solely focused on football heading into his time away at college.

“I feel like I made the right decision,” Burge said. “It’s not just going to better me, but the people around me and my family. At the end of the day, I want to get an education.”

Leslie, an offensive lineman for the Wolves, joins a long list of Rome players who have moved on to Division I schools.

The AJC All-State selection helped bolster a Wolves’ offense that has won two Class 5A state championships in his time with the team. The Conference USA Hilltoppers finished with a 9-4 record this past season with wins against Arkansas and Western Michigan, which came in the First Responder Bowl.

“I loved it here,” Leslie said “I really don’t want to leave, but I want it to make me a better man.”