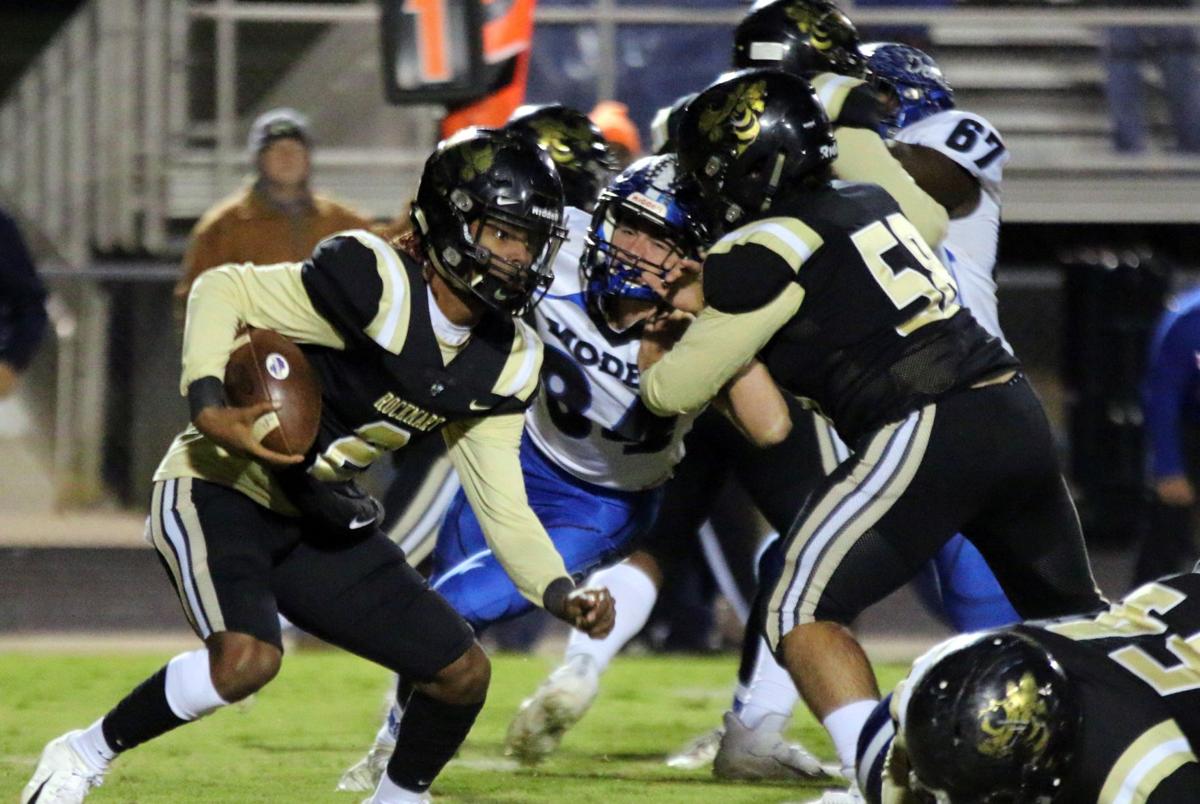 Rockmart quarterback Javin Whatley (2) runs to the outside while teammate Matthew Waddell (58) blocks Model’s Corbin Lamb during the first quarter of Friday’s game in Rockmart. The host Yellow Jackets won 27-0. 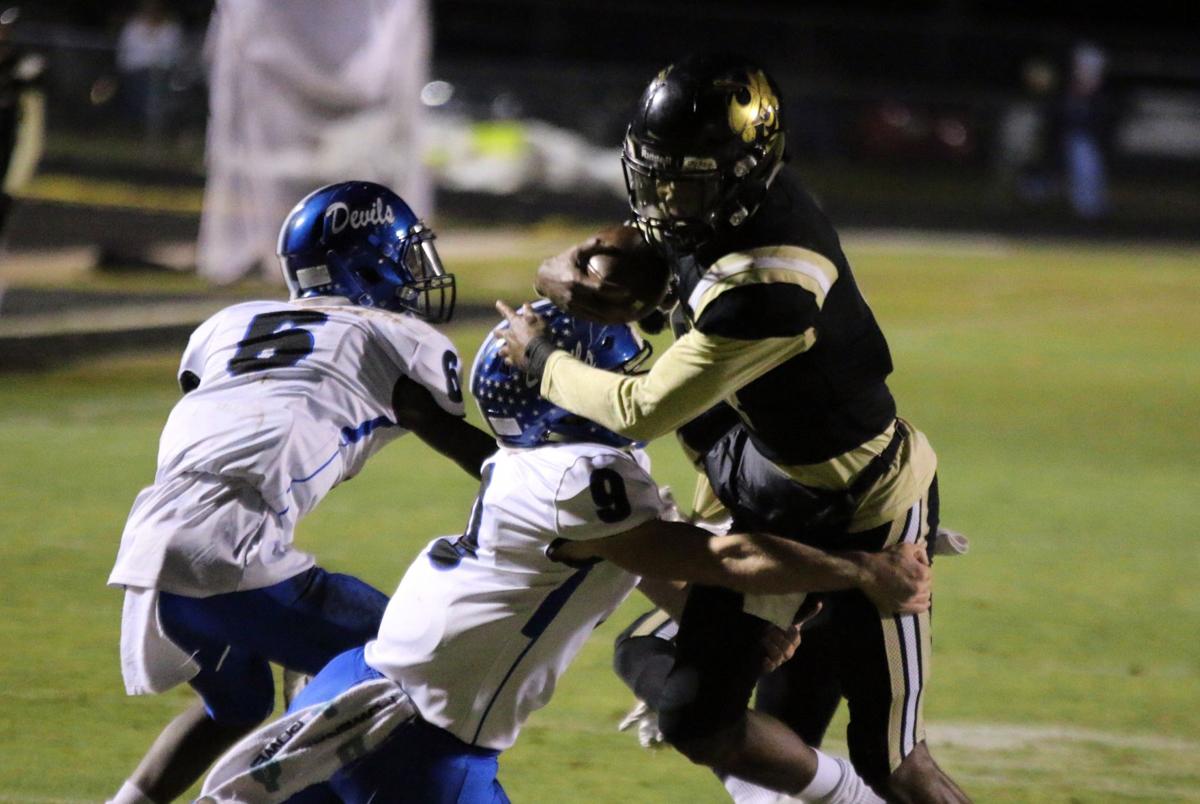 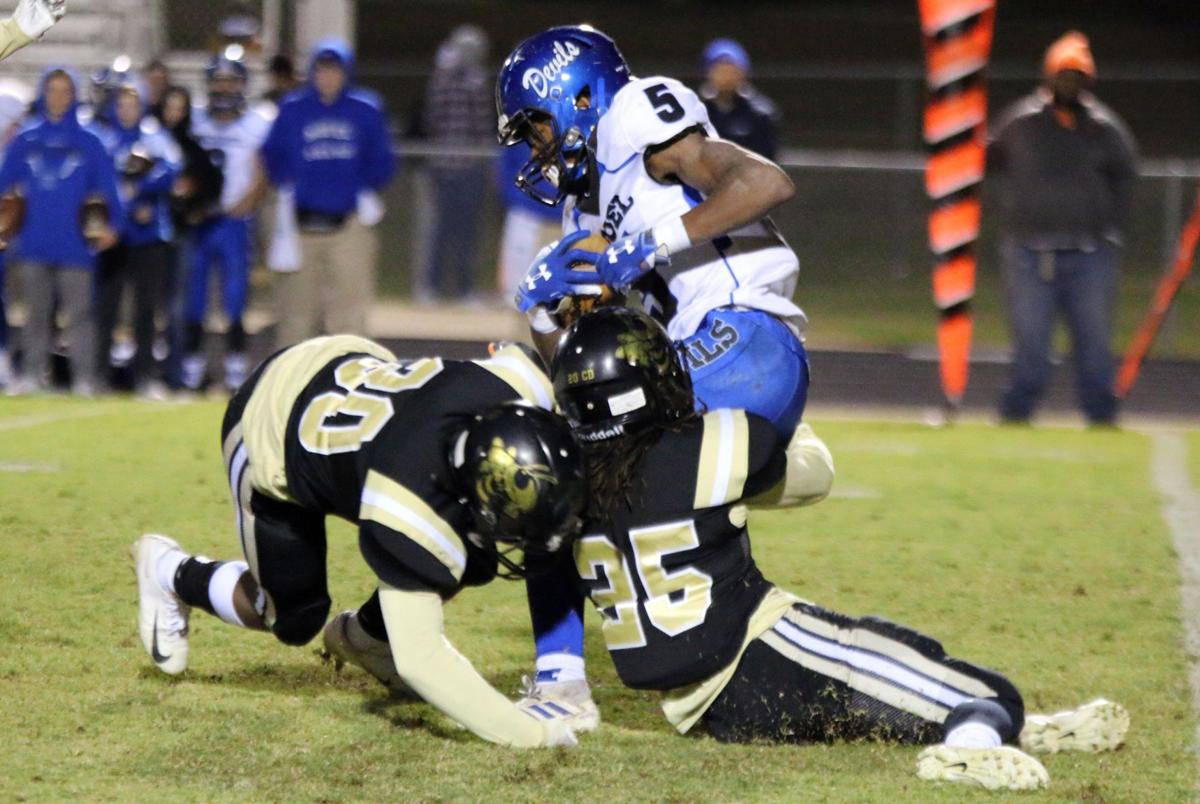 Model’s Troy Arnold (5) is tackled by Rockmart’s Lanear McCrary (30) and Cam Ferguson (35) during a kickoff return in Friday’s game.

Rockmart quarterback Javin Whatley (2) runs to the outside while teammate Matthew Waddell (58) blocks Model’s Corbin Lamb during the first quarter of Friday’s game in Rockmart. The host Yellow Jackets won 27-0.

Model’s Troy Arnold (5) is tackled by Rockmart’s Lanear McCrary (30) and Cam Ferguson (35) during a kickoff return in Friday’s game.

ROCKMART — What Rockmart’s offense started, its defense had to clamp down and finish on Friday night.

But in the end its streak remained intact, and the Yellow Jackets celebrated a three-peat.

Javin Whatley threw for two touchdowns and ran for another in the first quarter and No. 1 Rockmart held on for the second half to claim a 27-0 win over visiting Model and claim its third straight Region 7-AA championship.

The Jackets completed their second 10-0 regular season in a row with the victory as they turn their attention to the state playoffs and a chance at returning to the Class AA championship game to avenge their loss in last year’s final.

“It took hard work and the team had to bond with each other. We’ve spent a lot of time together, from when we started this thing on June 1 all the way to now,” Rockmart head coach Biff Parson said. “We had two goals going into this season. This was our number one goal, to win the region championship. We’ve accomplished that, so now we want to win the state championship.”

Model’s defense, paired with some untimely Rockmart penalties, kept the Jackets from scoring for the rest of the night to hold the home team to its fewest points of the season. A punt, a lost fumble, two missed field goals and a turnover on downs accounted for the rest of Rockmart’s possessions.

“We feel like we left about four touchdowns out there. But at the end of the day, a win’s a win. And we can always go back and watch film and correct the mistakes that we had,” Parson said.

Whatley finished 20-of-35 passing for 263 yards on the night. He scored on a 3-yard run to end the opening drive that covered 71 yards, and then capped the next two with highlight passes.

The first came on third-and-10 from the Jackets’ 31 as the junior scrambled in the pocket before throwing a high pass down the middle that found its target right in the hands of a running Juke Boozer, who beat two Model defenders and headed to the goal line.

Whatley then salvaged a low snap and hit CJ Culver in the end zone on a 27-yard strike with 1:21 left in the first quarter that ended a 55-yard drive for the Jackets. Rockmart finished with 433 yards of offense, compared to Model’s 143.

The Blue Devils converted on fourth-and-2 in the opening drive of the second half but fumbled the ball away two plays later.

Model (5-5, 5-2) put together it’s longest drive of the night in the latter half of the fourth quarter, getting down to Rockmart’s 39. But a pass by Jabari Burge over the middle was tipped and Rockmart’s Keyshaun McCullough was able to get under it for the interception.

“I can’t take anything away from their effort in the second half, but against a good football team, you can’t make the mistakes that we did on the back end,” Model head coach Jeff Hunnicutt said. “We’ll make corrections and build from that. I’m extremely proud of the way we played. I didn’t think we quit. Offensively, we’ve just got to clean things up.”

While Rockmart won the turnover battle, it surpassed Model in penalties, 13-6. That included five holding calls, including one that negated a 19-yard touchdown run by Floyd in the fourth quarter.

The Jackets will host Temple in the first round of the Class AA state playoffs next week, while Model returns to the postseason after a three-year absence and travels to Bremen.