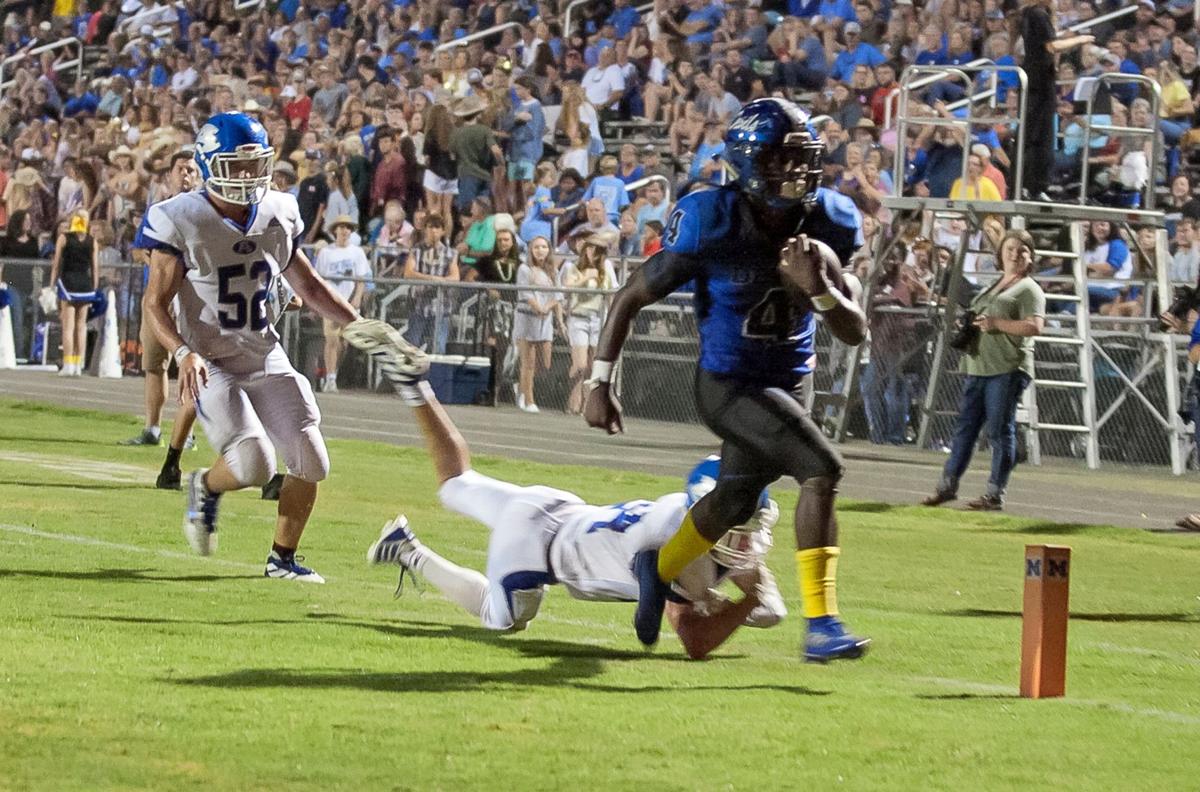 Model’s A.J. Woods avoids an Armuchee defender as he runs into the end zone for a touchdown early in Friday’s Region 7-AA game at Woodard-Tuggle Stadium. The Blue Devils rolled to a 44-6 win over their Floyd County rivals. 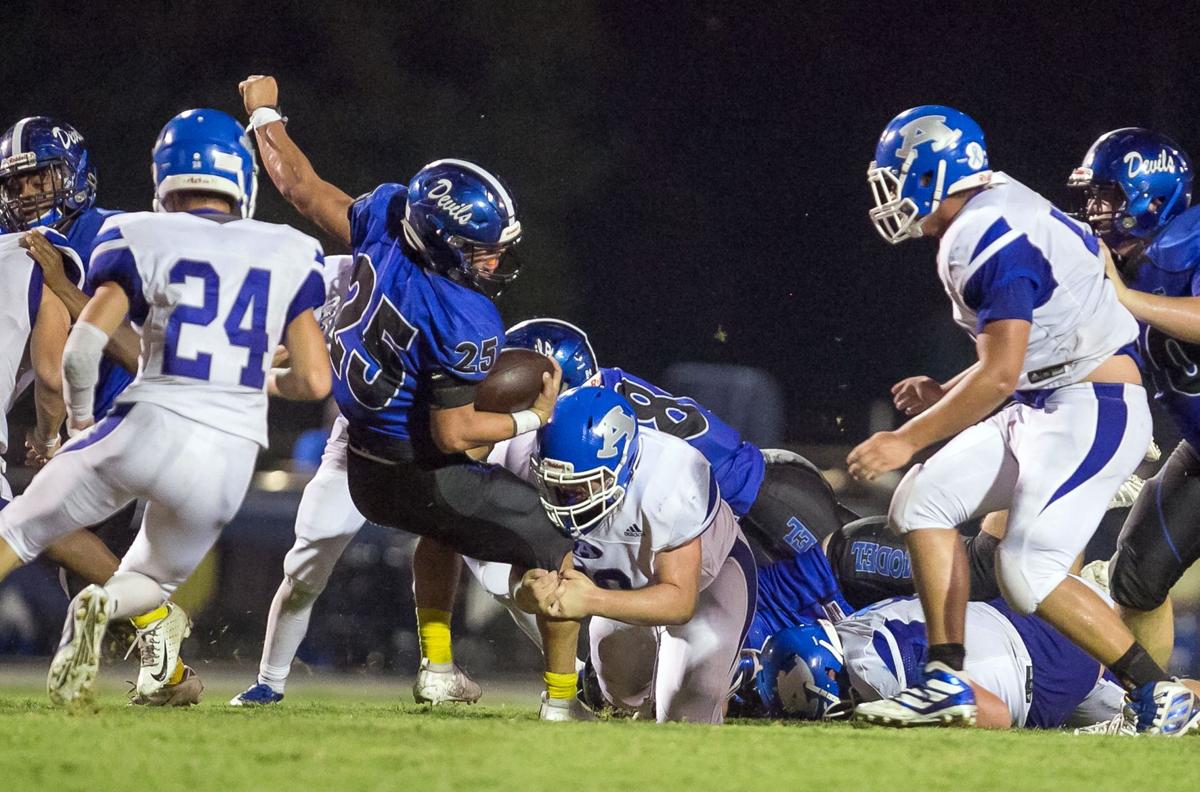 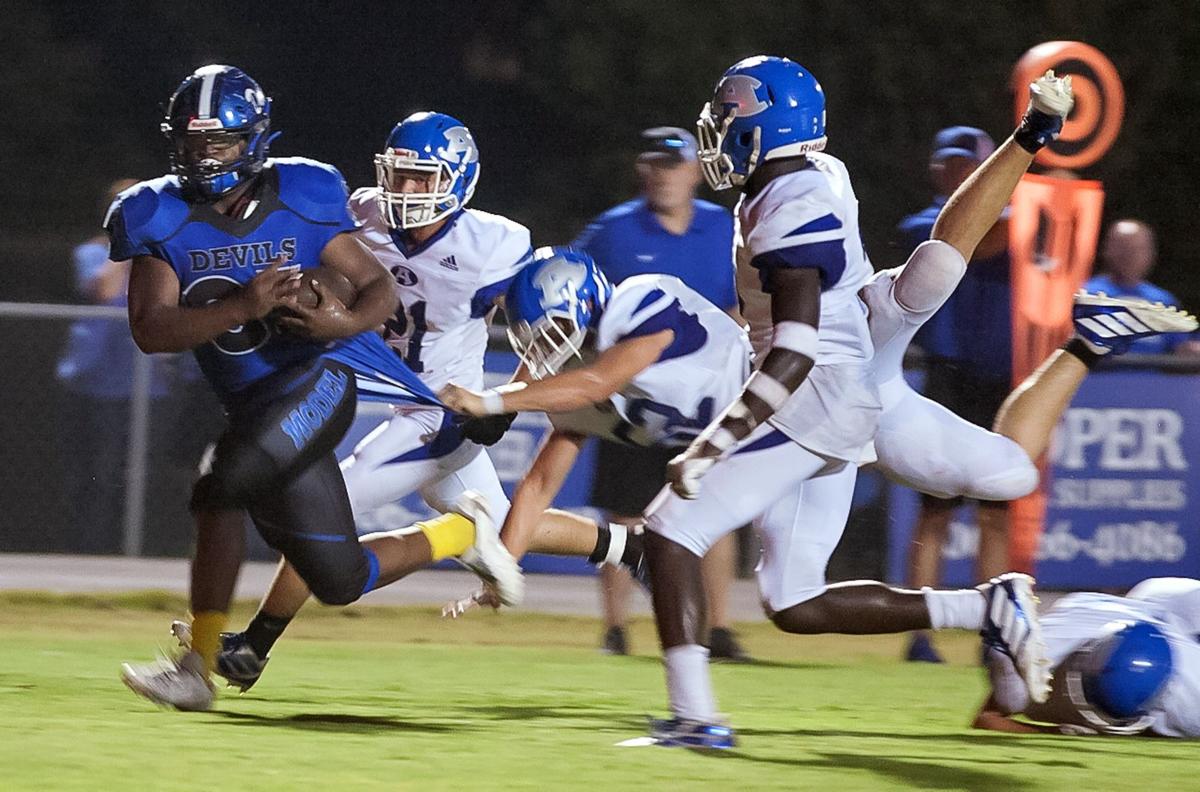 Model’s A.J. Woods avoids an Armuchee defender as he runs into the end zone for a touchdown early in Friday’s Region 7-AA game at Woodard-Tuggle Stadium. The Blue Devils rolled to a 44-6 win over their Floyd County rivals.

While Model’s season has gotten off to a slow start, the Blue Devils are picking up speed when it matters the most.

After starting the year 0-3, the Blue Devils earned their second straight Region 7-AA win Friday in a 44-6 homecoming victory over Armuchee. The win moves Model to 2-0 in region action and gives first-year head coach Jeff Hunnicutt his second win.

“It’s fun to watch these kids grow week-to-week,” Hunnicutt said. “We’re going to enjoy this one. They need to enjoy it. It’s exciting for these kids. They need some of this.”

The win was the eighth straight victory for Model in the series that dates back to 1964.

The Blue Devils owned a 7-0 lead after the first quarter, but really poured it on in the second quarter, putting up 30 points to take a 37-0 lead into halftime.

“I thought we had a big second quarter,” Hunnicutt said. “We made some stops defensively and had a couple of big plays on offense. We got a little bit relaxed in that first quarter, but we responded in the second quarter.”

Following Joe Wallace’s 2-yard rushing touchdown in the first quarter to go up 7-0, Model increased their lead on a 14-yard run from A.J. Woods, and another score from Wallace — this one on a 12-yard run with 44 seconds left in the first half.

Jabari Burge connected on two touchdown passes in the second quarter — a 21-yarder to Tyler Gamble and a 34-yard pass to Corbin Lamb — and finished 3-of-4 for 40 yards.

Wallace led the ground game with 68 yards on 14 carries, and A.J. Woods had 43 yards on four carries.

The Blue Devils also scored a safety in the second quarter when the Indians lined up to punt from their own 5-yard line and the snap went over punter Ethan Todd’s head and out of the back of the end zone.

Hunnicutt said he’s been able to notice improvement in his team as the season progresses.

“We’ve stayed on our kids about maintaining their blocks through the whistle and I thought we did that at times,” Hunnicutt said. “Armuchee kept playing as well, but we started clicking, and I was pleased with that.”

Added to a long list of injuries for the Indians on Friday was second-string quarterback Kameron Parker, who has been playing for injured starting quarterback Devin Pledger after he was injured in the season opener.

Parker was injured in the second quarter when he was hit while completing his only pass of the game — a 12-yard pass to Sylvester Bassey. Parker didn’t return to the game and was replaced by Chandler Desanto.

“I don’t know what God is trying to teach us with all this adversity,” Armuchee head coach Jeremy Green said. “Whatever the lesson is, it’s our job to learn. I love those kids. I don’t feel any differently than I ever have. What they’re going through is not easy. There’s a lot of other ones that would’ve quit, but that bunch hasn’t.”

Desanto finished 4-of-10 for 46 yards, including a 17-yard touchdown pass to J.J. House in the third quarter, which kept the Indians from getting shut out. Gauge Burkett finished with 19 yards on 10 carries.

The Blue Devils will put their 2-0 region record on the line next Friday when they head to Lindale to face Pepperell at Dragon Stadium.

Armuchee (0-5, 0-2) will host Coosa next Friday in another region contest.