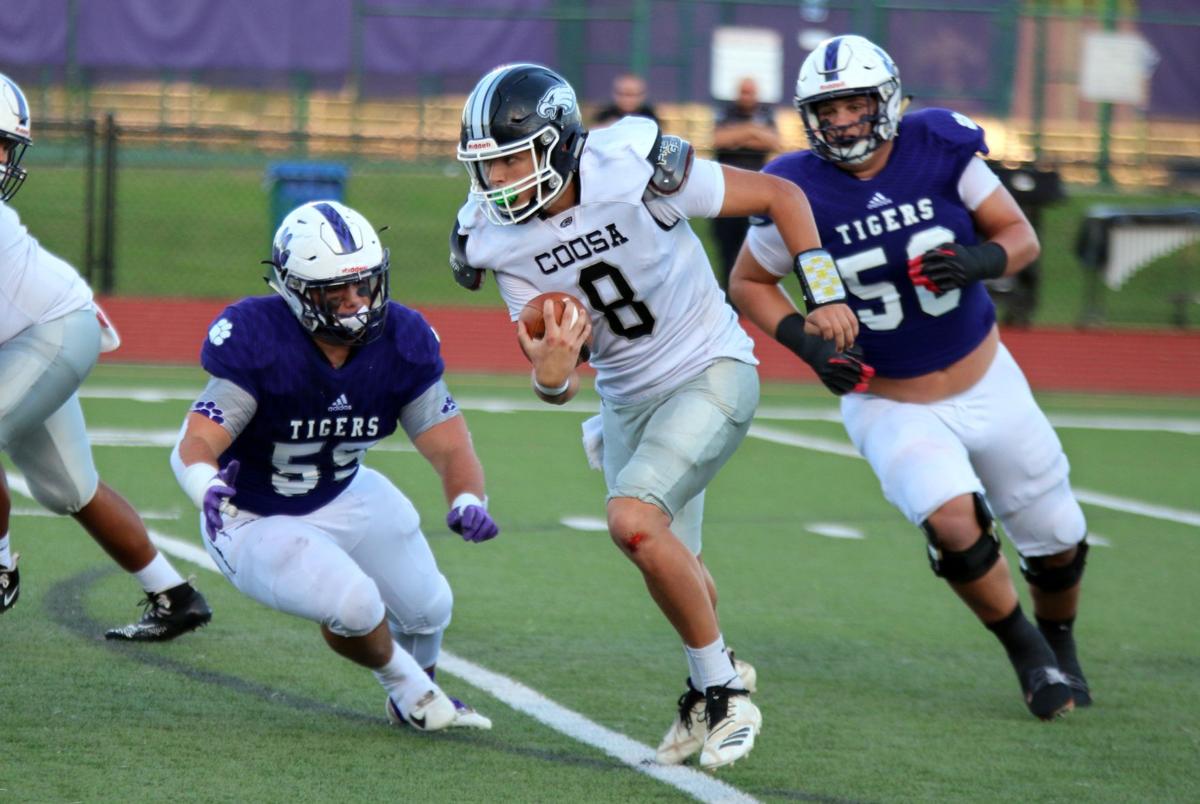 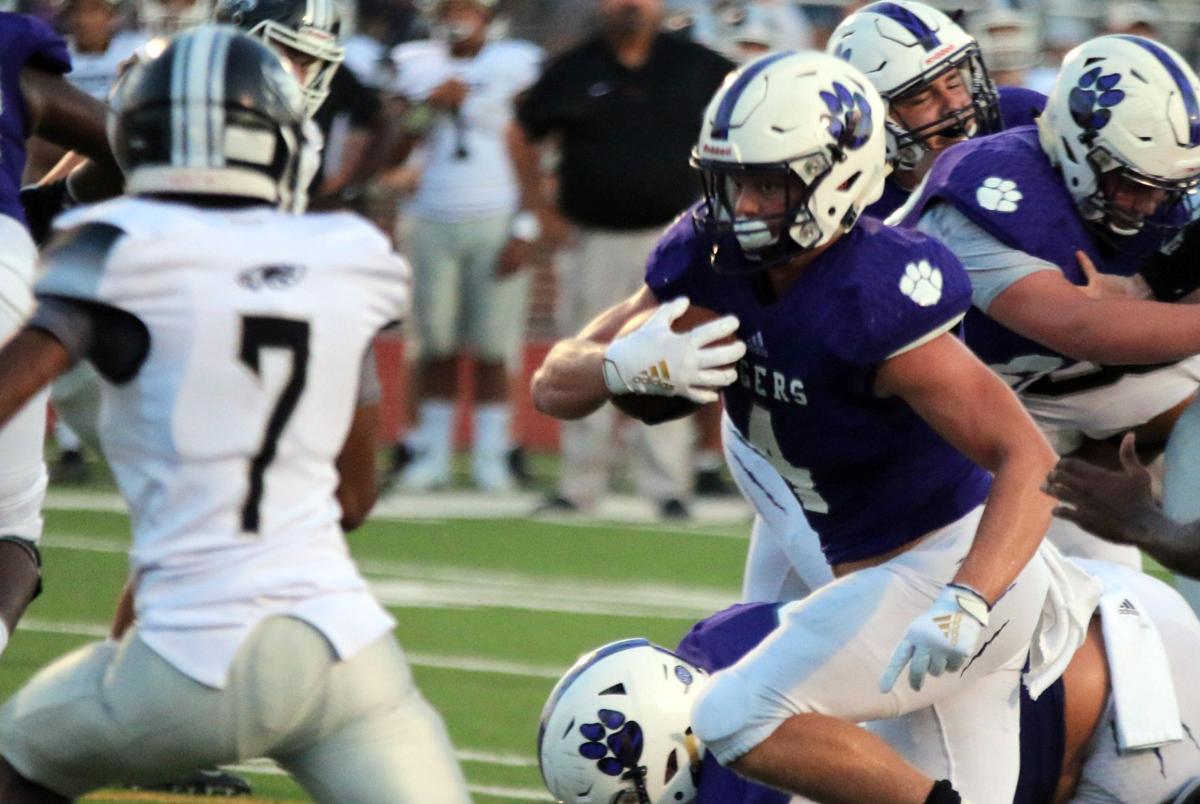 Darlington’s Kolin Rogers makes his way through the middle of the Coosa defense during Friday’s game at Chris Hunter Stadium. 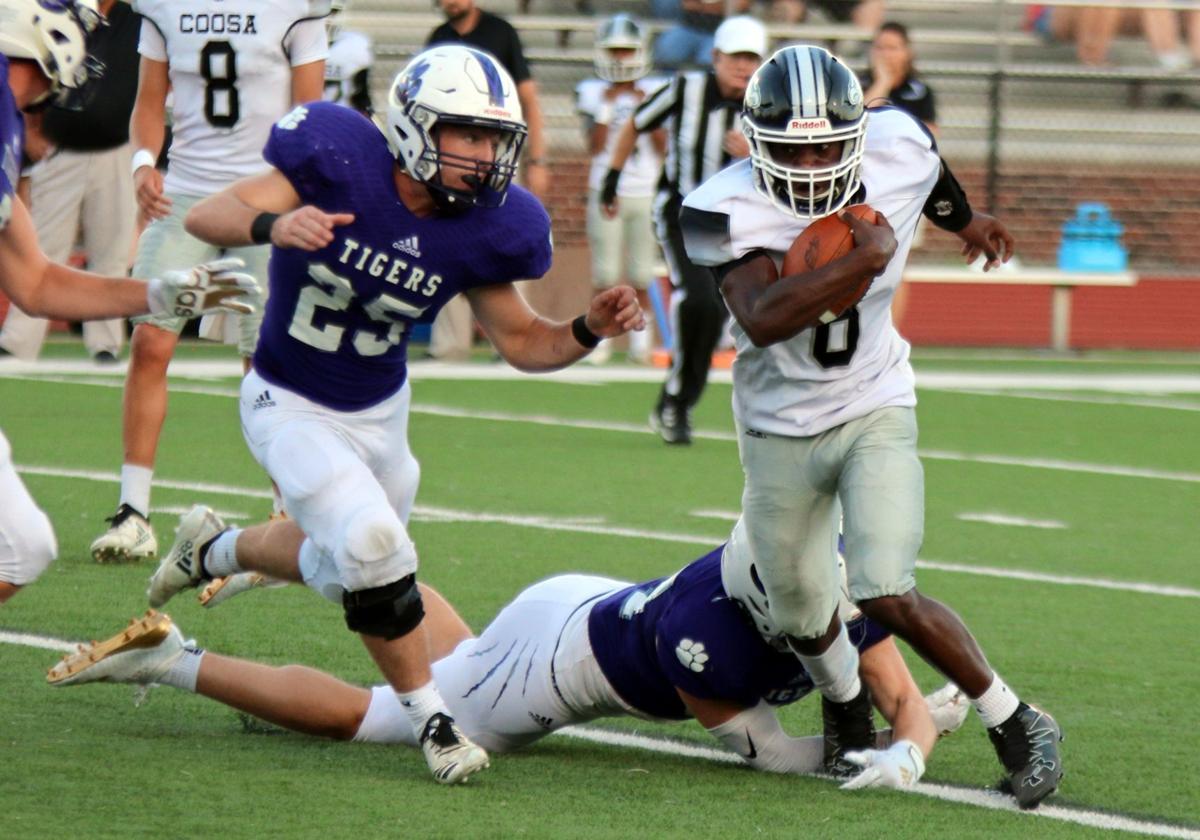 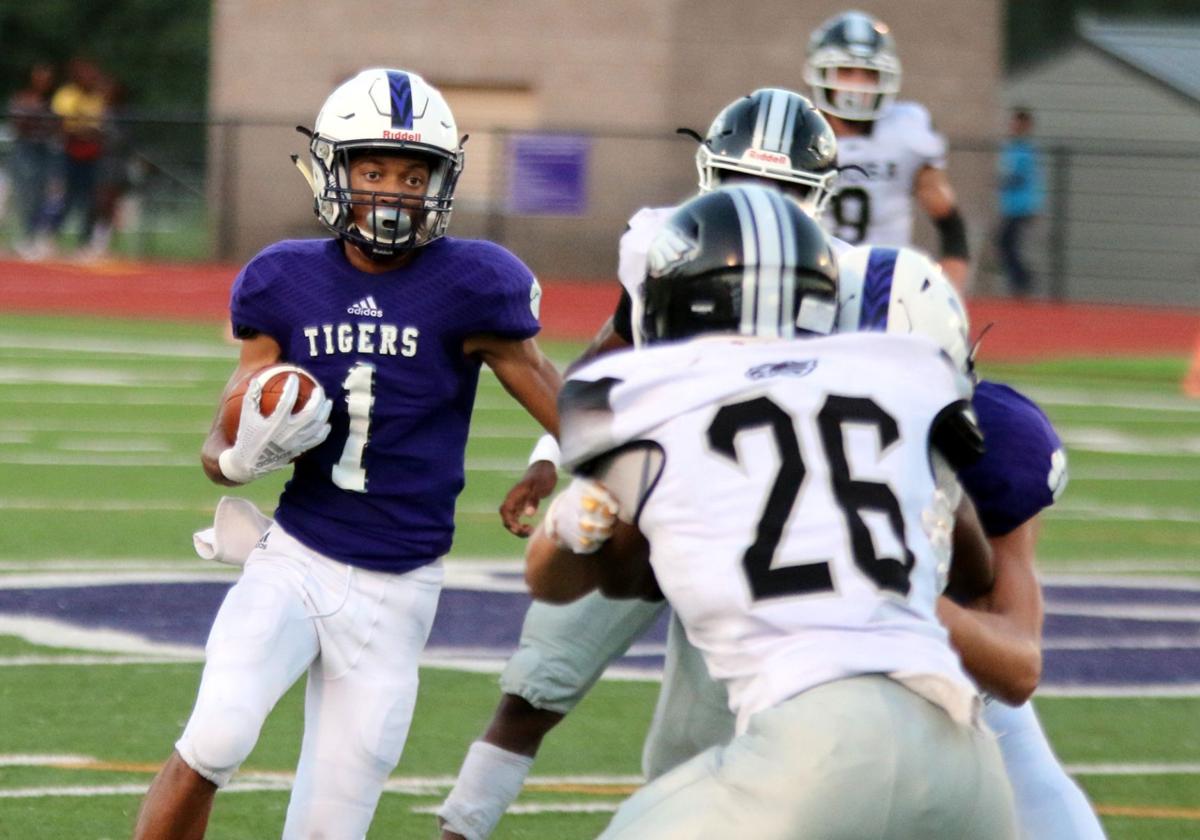 Darlington's Trystin Wright (1) looks downfield as he returns a punt during Friday's game against Coosa at Chris Hunter Stadium.

Darlington’s Kolin Rogers makes his way through the middle of the Coosa defense during Friday’s game at Chris Hunter Stadium.

Darlington's Trystin Wright (1) looks downfield as he returns a punt during Friday's game against Coosa at Chris Hunter Stadium.

After giving up just one touchdown last week, the Darlington defense was on high alert again this week as the Tigers shut out fellow Floyd County team Coosa as part of a dominating 49-0 win at Chris Hunter Stadium.

The visiting Eagles were held to 120 yards of offense in the non-region game while Darlington powered through for 377 yards, 240 of which came on the ground. Kolin Rogers was the Tigers’ work horse once again, running for 146 yards and four touchdowns on 14 carries through only about two and a half quarters.

Coosa (0-2) lost two fumbles in the first quarter, with one leading to Darlington’s second touchdown of the game. An interception by Frank Manning in the final minutes of the first half ended Coosa’s final drive that didn’t come under a running clock as the Tigers took a 42-0 lead on the first possession after halftime.

Darlington head coach Tommy Atha said he was glad to see the all-around effort shown by his team after grinding out a 17-7 win over Pepperell in the season opener.

“We did some really good things last week and played tremendously hard, but we needed to clean some things up and I feel like we did that this week,” Atha said. “Now, it wasn’t perfect. We’ve got a long way to go and got a ton of things we’ve got to do better. But I told them when you play with that type of effort for 48 minutes, good things will happen.”

Darlington senior quarterback Griffin Brewster was 8-of-14 passing for 137 yards, including a 9-yard touchdown pass to Patrick Shelley.

The Tigers’ defense had plenty of contributors, from Cade Brock and Tate Ratledge on the line to Kobe Nadu and Dawson Williams swarming Coosa’s running backs.

“Our defense is so bought in to what we do. They play with a ton of enthusiasm and fly around,” Atha said. “Again, defense can win you a lot of football games. So if we’re playing great defense we’ve always got a chance.”

With a 14-0 lead after the first quarter, Darlington used a solid punt return by Trystin Wright to set the Tigers up at the Coosa 26-yard line. Rogers ran the ball in from 6 yards out five plays later and Brinson Sumner kicked the extra point to make it 21-0.

Rogers, a senior, would cap Darlington’s next two drives with touchdown runs to set the Tigers up for a rousing win on their home field.

“We hit them in some weak spots in the middle of the field, but we just didn’t come out ready to play. And you can’t do that against a good Darlington team,” Coosa head coach Todd Wheeler said. “Like I’ve said, Darlington is one of those teams that executes at a high level, and when you make mistakes they capitalize on it. And that’s what happens.”

Darlington (2-0) will go on the road for the first time this season next Friday when they travel to Sonoraville. Coosa, meanwhile, will have its first home game with Mt. Zion-Carroll coming to Eagle Stadium.