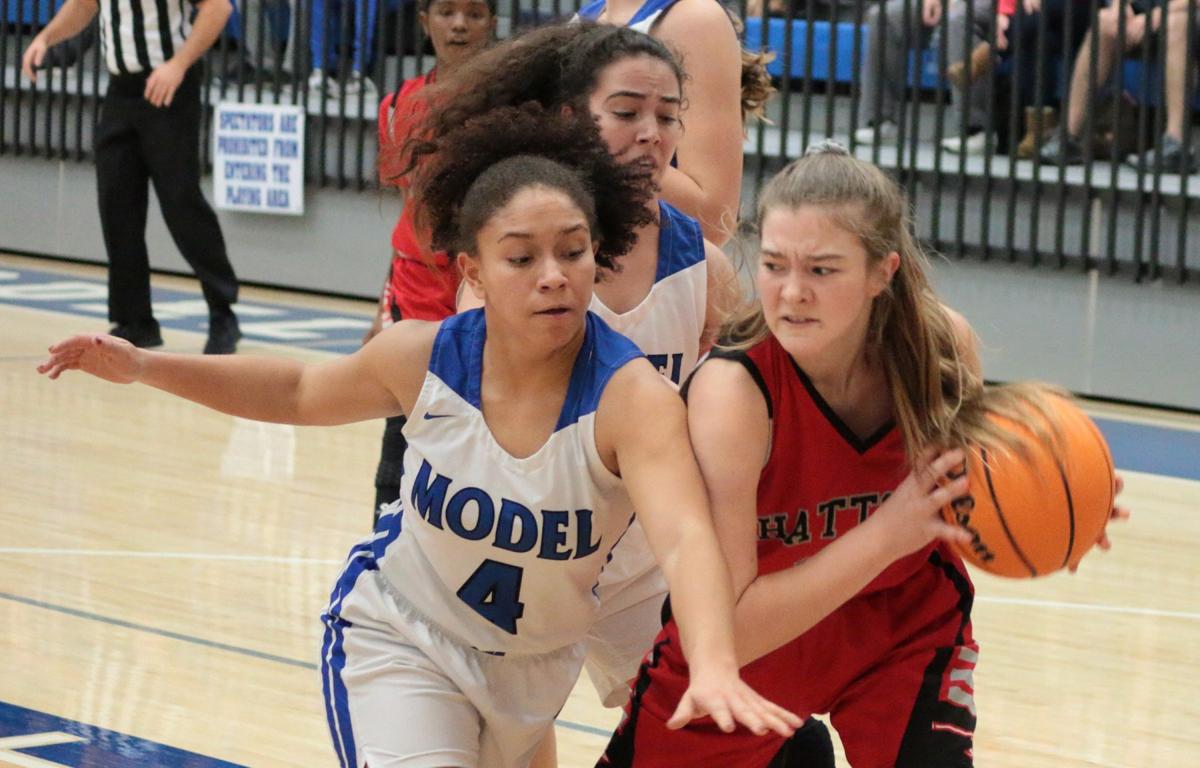 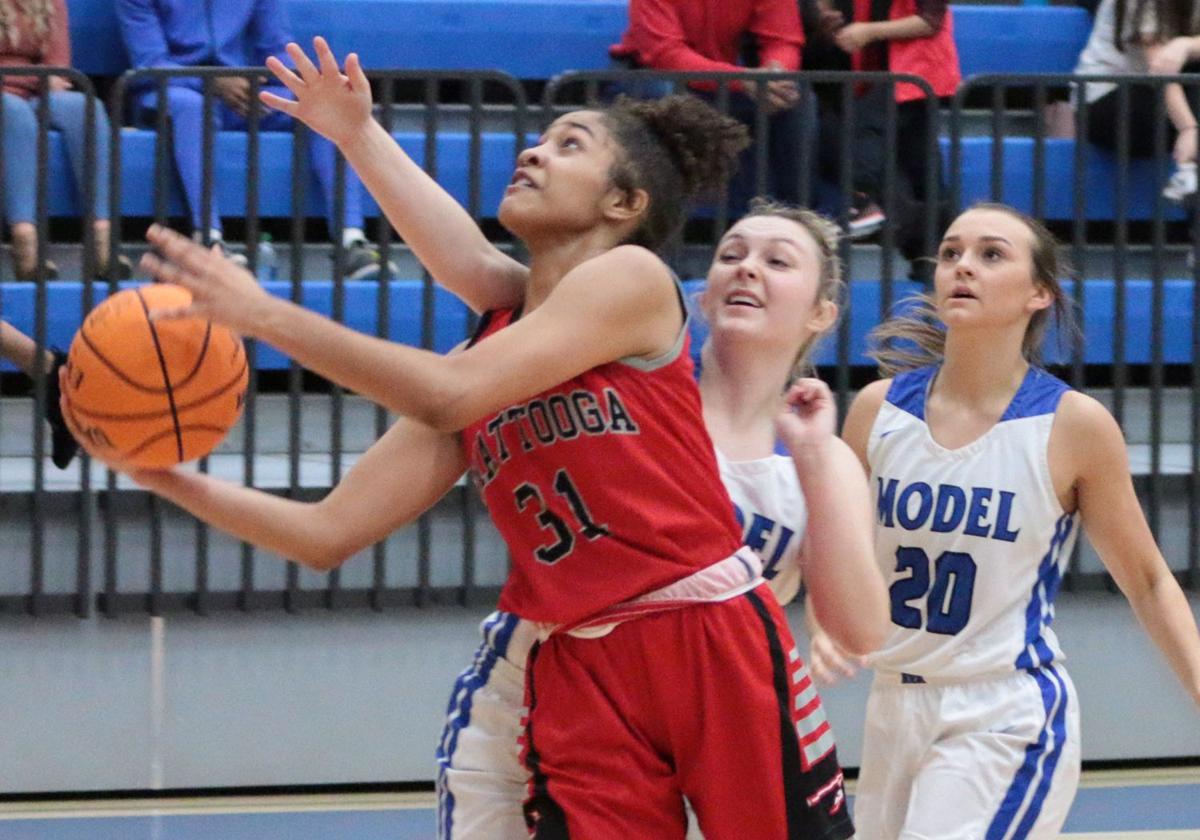 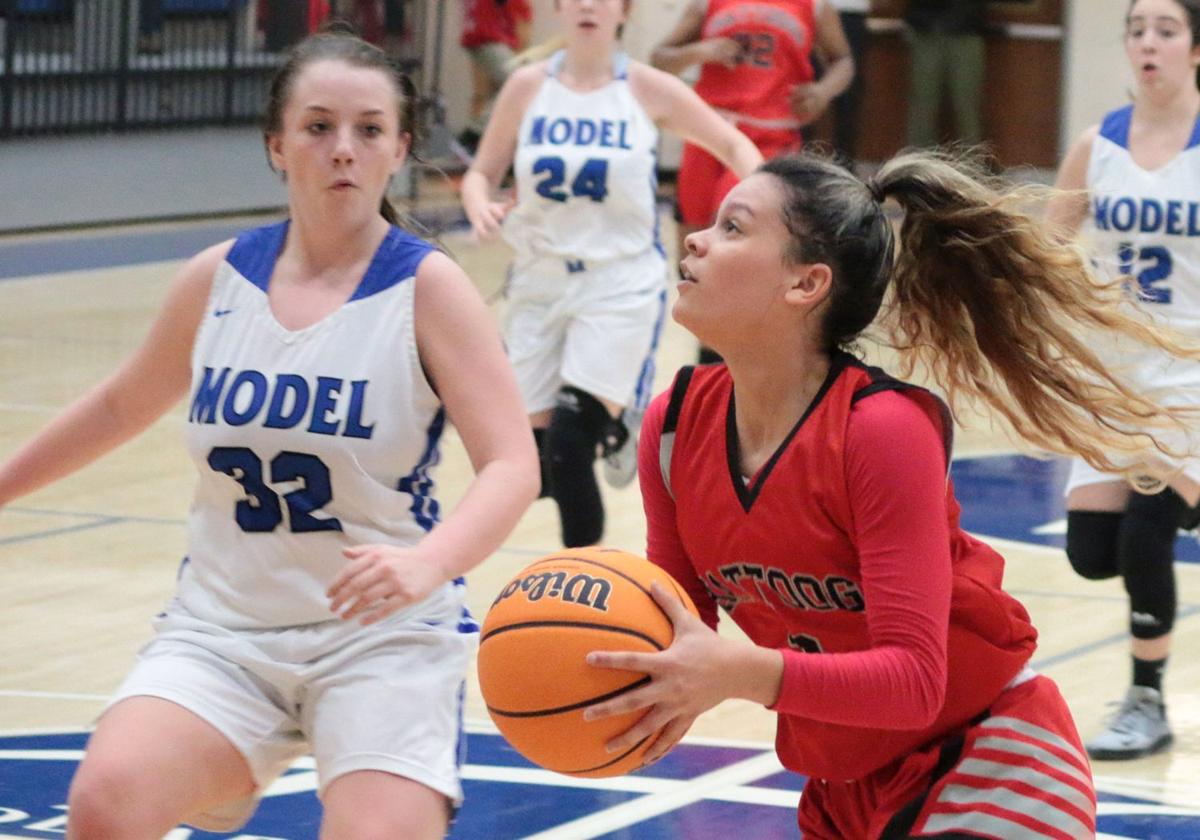 Chattooga’s Faith Ann Foster (right) sets up to take a shot in front of Model’s Madison Moats during Friday’s game.

Chattooga’s Faith Ann Foster (right) sets up to take a shot in front of Model’s Madison Moats during Friday’s game.

With both teams staying neck-and-neck for most of the game, the Chattooga girls’ basketball team came up with the needed push late in the contest to pull ahead of Model for good.

Sparked by back-to-back 3-pointers from Jacie Martin, the Lady Indians surged ahead to earn a 59-52 Region 7-AA win against coach Sally Echols and the Lady Devils on Friday night in Shannon.

“Playing at Model is always tough,” Chattooga coach Alvah Beasley said. “Coach Echols always has her kids ready to play, but we were able to make a run there in that fourth quarter. We just kind of buckled down. We hit some shots, and they missed some shots.”

Martin’s treys began a 16-2 run for the Lady Indians in the final period that pushed their lead to 56-43, their biggest advantage of the game.

“It was nothing special that we did,” Beasley said. “They just missed a couple of shots, and we came down and made the same shots that they missed. That allowed us to make that run there in the fourth quarter.”

The Lady Devils tried to make a comeback when Madison Harper followed up a basket by Sydney Colburn with four free throws, but Chattooga’s lead was too much to overcome.

Model coach Sally Echols said the Lady Indians were able to disrupt her team’s normal style of play, which Chattooga was able to take advantage of in the fourth quarter.

“We lost the flow of our offense,” Echols said. “We got into a panic mode and we got in a hurry. We just didn’t execute, and that lack of execution translated into poor communication on defense. So they got open looks they had not been getting.

“Tonight, we let poor decision making on offense dictate our defense. It doesn’t work that way.”

Down 22-20 in the last minute of the second quarter, Martin stole the ball from the Lady Devils and ran in for an easy layup. Faith Ann Foster repeated the same maneuver, following up a steal with a layup to give the Lady Indians a 24-22 lead at halftime.

Naveah Morgan got the Lady Indians going in the third quarter, opening with two straight buckets and going on to score nine points in the period to give Chattooga a 38-33 lead heading into the fourth.

After trailing 5-0 to start the game, the Lady Indians went on a 13-0 run, which was capped by two free throws by Makiya Parrish.

Harper and Montana Moats each scored 19 points to lead the Lady Devils. Harper was 7-for-12 from the free-throw line, and Moats knocked down three 3-pointers.