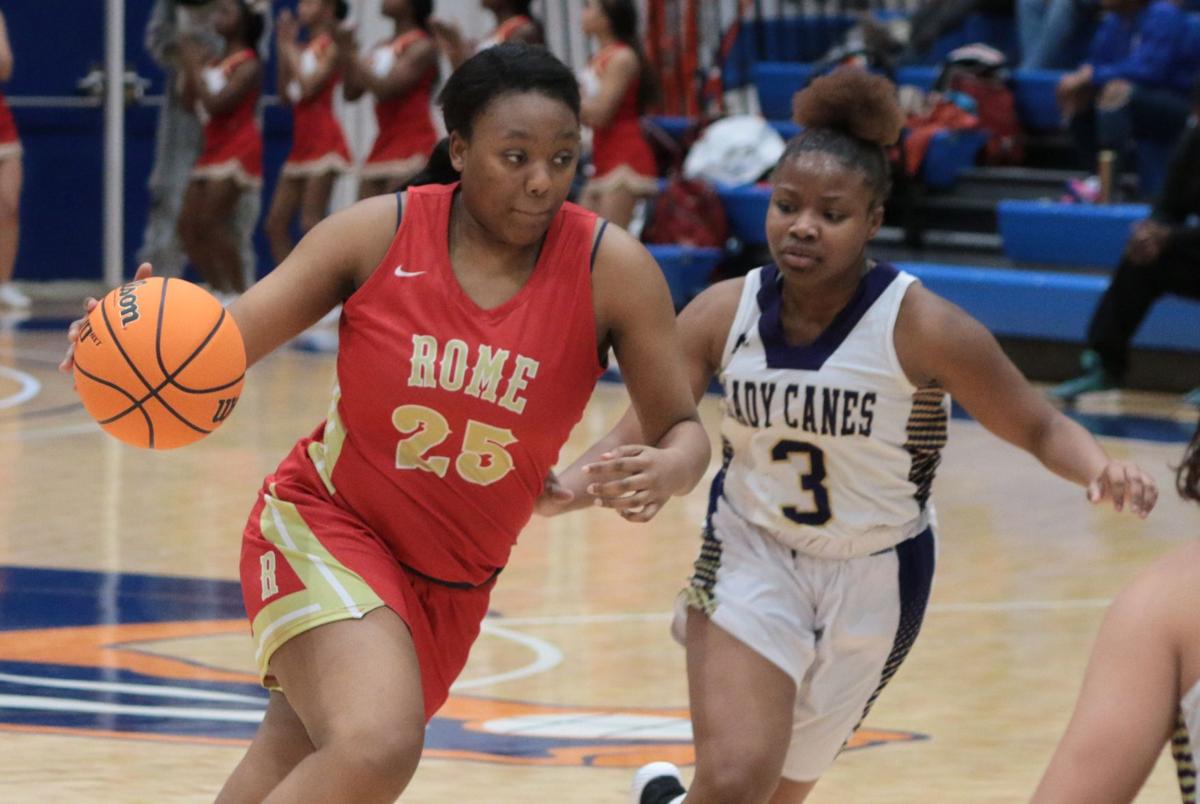 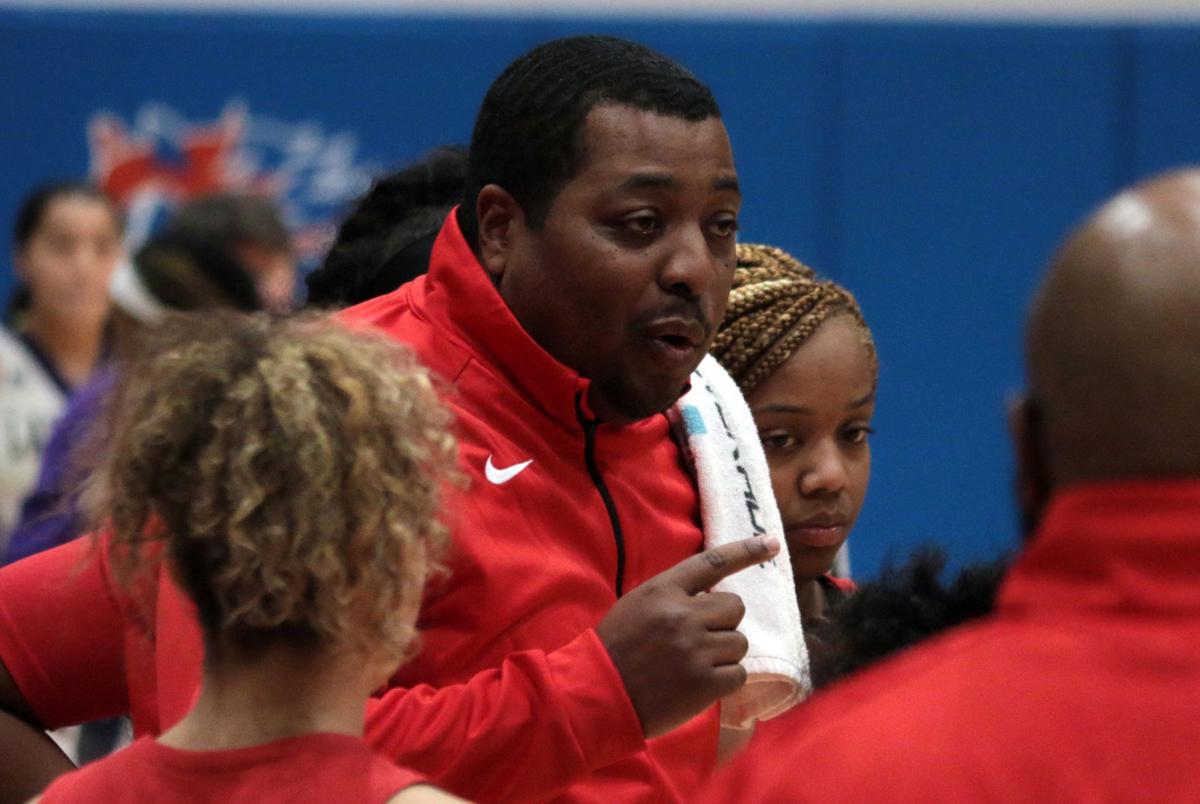 Rome High girls’ coach Jason Harris talks to his players during a timeout in Tuesday’s semifinal game against Cartersville at Georgia Highlands College. 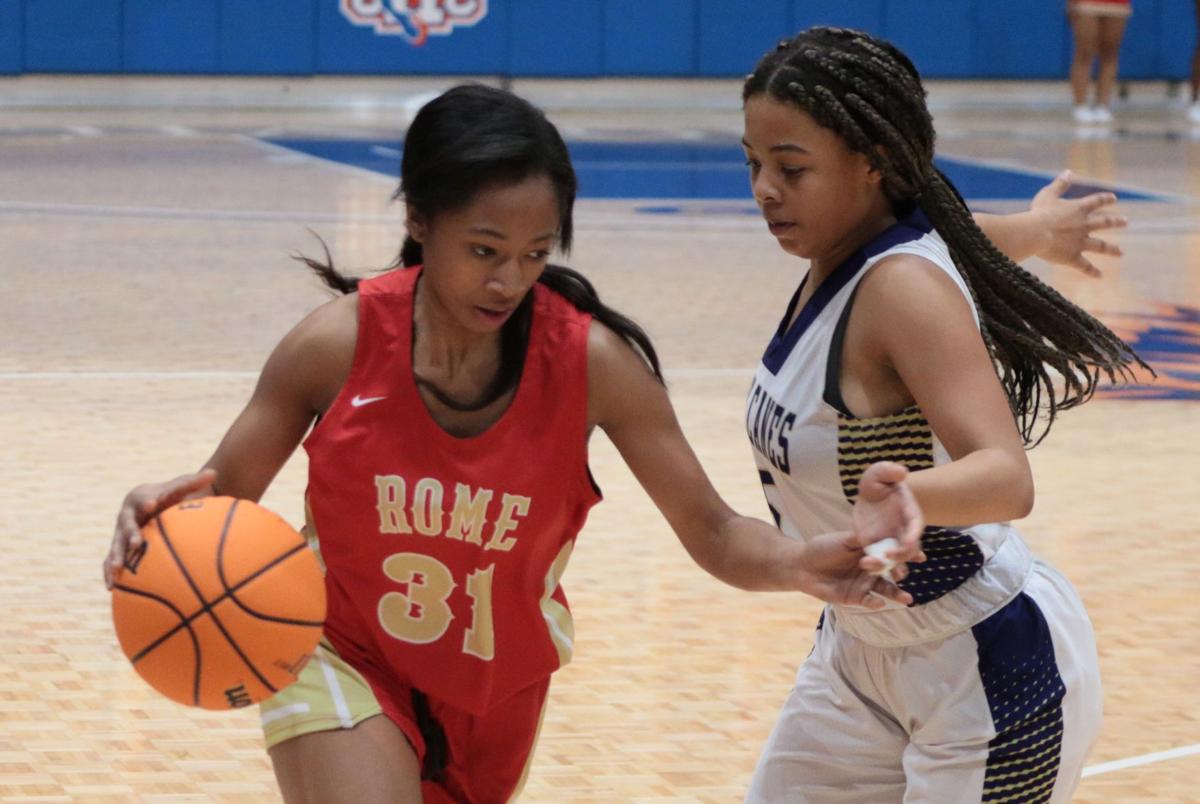 Rome High girls’ coach Jason Harris talks to his players during a timeout in Tuesday’s semifinal game against Cartersville at Georgia Highlands College.

Ten up and ten down.

That’s the stat line for the Rome Lady Wolves basketball team for the 2019-20 season after a semifinal win over Cartersville on Tuesday night at the 66th Annual Seven Hills Rotary-Rome News-Tribune Christmas Tournament at Georgia Highlands College.

The Lady Wolves improved to 10-0 overall after holding off a stubborn Lady Hurricanes team 49-37 in the first semifinal game of the tournament. Rome will now face Darlington in the tournament championship at Berry College on Thursday night after the Lady Tigers defeated Model 53-37.

The formula for the Lady Wolves’ success this year has been almost the same for every game — full-court pressure defense and three-point shooting. Rome drained eight shots from behind the arc Tuesday, and the constant pressure forced Cartersville into multiple turnovers.

“We tried to get into a rhythm shooting from the outside early, but they weren’t really dropping,” Rome coach Jason Harris said. “But we drove the lane and got some kick-outs and got some threes from that, and that got us going. And we always like to try to pressure teams and get some transition points. That’s what I like about coaching this team — we can score from anywhere and anybody can get hot on any given night. We’ve got a lot of options on the floor.”

For Cartersville (3-3), head coach Cindy Moore knew that Rome’s pressure defense would present a challenge from the opening tip.

“I was pleased overall with our effort. … We played a tremendous first half and took care of business against their press,” Moore said. “But when they started to pull away (in the third quarter), we just couldn’t make a run. They can score in a lot of ways, and they play great defense. And when Ariana Cochran went down with a sprained ankle, we lost some of our confidence and some momentum. You can see why they are a highly-ranked team in Class 5A.”

The Lady Hurricanes actually led 14-8 after the first quarter, with Rome missing a number of their 3-point shot attempts. But over a five-minute span in the second period, Rome went on a 14-3 run, with back-to-back-to-back treys fueling the charge. At halftime, the Lady Wolves led 31-25.

After three quarters, Rome had built a 44-34 lead, and Cartersville was held to just one field goal and one free throw in the final quarter as the Lady Wolves pulled away.

Amberly Brown led the way for Rome with 12 points, while Justyce Moore had 10. Cartersville was paced by Lehla Thomas’ 12 points, while Cochran chipped in seven points before leaving with an injured ankle early in the third quarter.

The Lady Hurricanes will meet Model in the third-place game at Berry at 4 p.m. on Thursday. The girls’ championship game is scheduled for 7 p.m.

The Darlington Lady Tigers advanced to the finals of the Seven Hills Rotary/Rome News-Tribune Christmas Tournament on Tuesday with a hard-fought 53-37 win over Model at Georgia Highlands College.

It was Darlington’s fourth win this season over the Lady Blue Devils, with two different tournament wins coming along with two regularly scheduled early-season games.

“That was a little different than our regular late-game spread, but we decided to go with it and just looked for perfect shot opportunities,” Darlington coach Hazel Hall said. “When you have a special player like Caroline, who has size and can handle the ball and is such a good athlete, it makes things run a lot easier.”

In addition to Dingler’s offense, Darlington got 11 points from post player Emmaline Ratledge.

Model was led by Montana Moats, who scored 13 points, while Nia Allen chipped in 10.

The Lady Blue Devils will play in Thursday’s third-place game at Berry College against Cartersville.