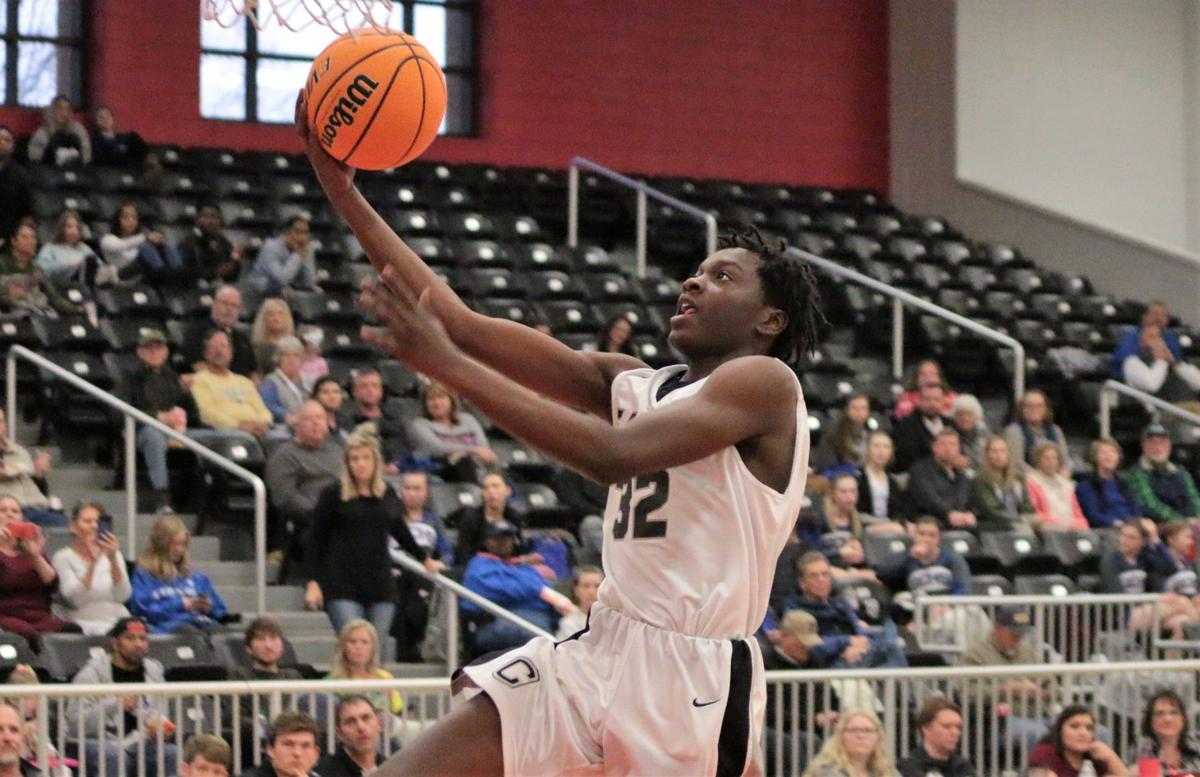 Coosa’s Zaire Philyaw starts his way in for a layup early in Tuesday’s Region 7-AA quarterfinal game between the Eagles and Pepperell at Chattooga High School. Coosa won 70-46 to advance to the semifinals and earn a berth in the state playoffs. 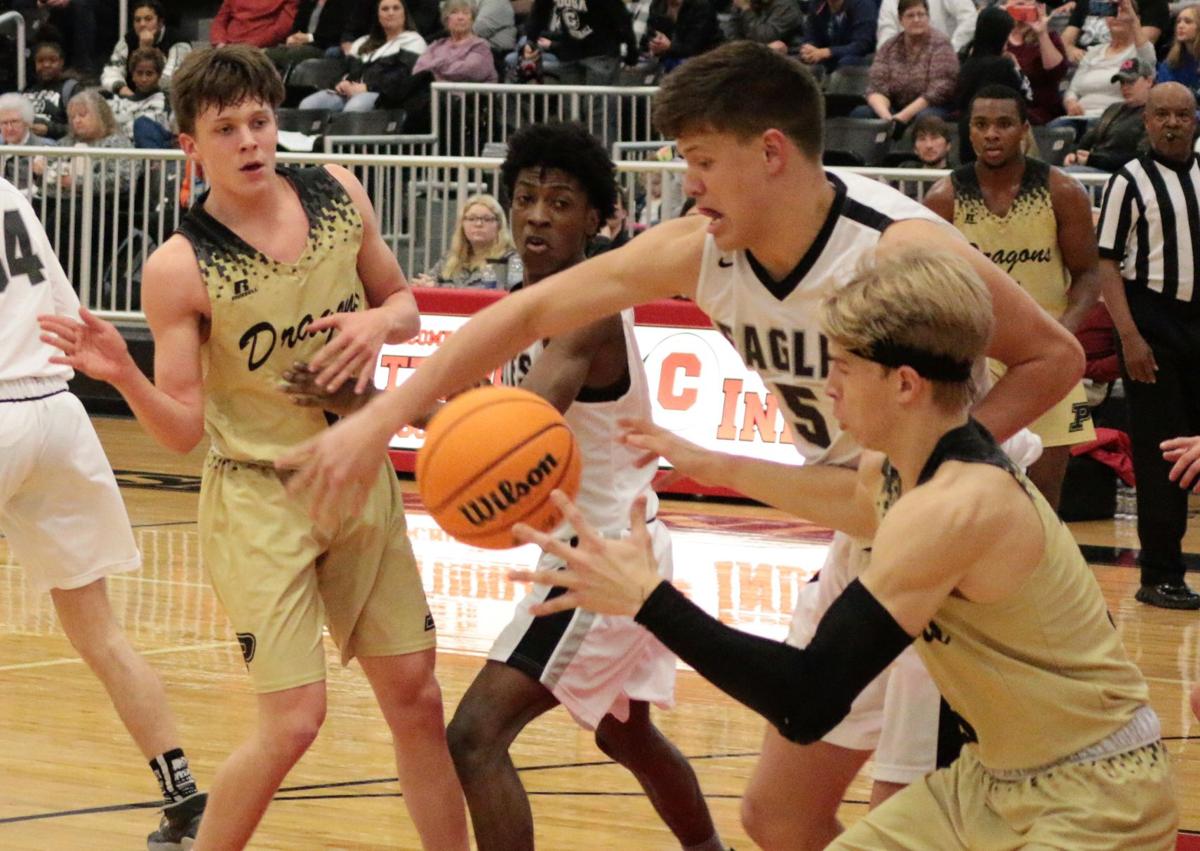 Coosa’s Zaire Philyaw starts his way in for a layup early in Tuesday’s Region 7-AA quarterfinal game between the Eagles and Pepperell at Chattooga High School. Coosa won 70-46 to advance to the semifinals and earn a berth in the state playoffs.

SUMMERVILLE — Winning came with more than just a “W” in the record book at the Region 7-AA basketball tournament on Tuesday, and the Coosa Eagles were focused on not coming up shorthanded.

The region’s No. 4 seed used a dominant second period to build a lead that lasted to the end of their contest with Pepperell at Chattooga High School to give Coosa a 70-46 victory and a berth in the Class AA state playoffs.

The Eagles (14-9) will play No. 1 seed Chattooga on Thursday on the Indians’ home court in the tournament’s semifinals. Coosa and Armuchee’s girls’ basketball teams fell in the quarterfinals on Tuesday, cutting their seasons short.

Coosa boys’ coach John McFather said team defense and depth helped them get past a team they had beaten three times already this season, including by just three points in both the last two meetings.

“I was proud of our guys because ... this one puts you in the state (playoffs), and that can be pressure. But our guys played hard. They came out of the gates playing hard and continued to do it. We were fortunate and blessed,” McFather said.

“We’ve got a lot of respect for Pepperell. That was the fourth time we’ve played them. And so when you keep playing someone that many times, you know, they know you very well, and we know them very well. So that’s always a concern. We threw in a couple new little wrinkles here and there, just a few, which helped us I thought. We did a great job, for three quarters anyway, boxing out and trying to contain.”

Up 10-7 after the first quarter, Coosa outscored Pepperell 24-7 in the second period, with Zeph Philyaw scoring the first nine points of the quarter as part of a 12-2 Eagles run. Keshaun Kindred then kicked off an 8-2 run of which he scored the first eight points of and Coosa was up 30-12 and on its way to a 34-14 halftime lead.

Philyaw led the Eagles with 17 points in the game, while Kindred had 13 and Brevan Knight added 12. Pepperell was down by as many as 28 after a 3-pointer by Sam Richardson early in the fourth period, but Pepperell’s Payton Rhoades wasn’t done yet.

The senior and Region 7-AA boys’ Player of the Year was fouled eight times and went 11-of-15 from the line as part of his 17 fourth quarter points. Rhoades helped give the Dragons (11-15) a 9-3 run to start the period and got them to within 19 of the lead, but the effort was too little, too late.

“He’s a great player, and I thought we did a good job for three quarters of just keeping him off the boards and surrounding him,” McFather said of Rhoades. “And then I thought we played great team defense tonight on everybody else. Our guys were focused and we did a good job of trying to go inside out tonight, pound it inside, kick it back out, and that seemed to work really well for us tonight.”

In other action Tuesday:

A total team effort got the Model boys' basketball team into the state playoffs on Tuesday as the Blue Devils pulled away from Gordon Central over the course of a 65-39 win at the Region 7-AA tournament.

Jabari Burge paced the Blue Devils with 16 points in the contest, while fellow all-region player Jared Bomer added 14 and Dane Fisher made four 3-pointers for a total of 12 points. Jackson Mathis, who was also chosen for the all-region first team, had plenty to do with the win as he had nine points, five assists and  five rebounds.

Kade Steward led Gordon Central (4-22) with 11 points, while Clayton Hogue had eight. Model had seven total 3-pointers in the game to the Warriors' none.

Next for Model is the region semifinals on Thursday when the Blue Devils will take on No. 2 seed Rockmart.

After surviving an overtime battle with Model on Monday, Coosa’s girls were defeated by No. 4 seed Gordon Central 71-50 in Tuesday’s opening game at the Region 7-AA tournament.

The Lady Eagles (2-17) trailed just 16-13 after the opening period, but were outscored 24-12 in the second quarter. Gordon Central’s Mercedes Coleman, the Region 7-AA girls’ Co-Player of the Year, scored a game-high 26 points for the Lady Warriors (17-7), while Cheyenne Temple had nine and three others had eight.

Coosa was led by Jordon Roberts’ 11 points, including a pair of 3-pointers. Paris Woodard had nine and Keyana Jackson finished with eight. Gordon Central will play top-seed Chattooga in the semifinals on Thursday.

A slow start was a tough obstacle to overcome as Armuchee scored just two points in the first period of their quarterfinal match with Dade County and lost 44-27.

Dade County (18-8) had some trouble after halftime and scored just six points in the third quarter but managed to hold off Armuchee (11-15) on the way to a spot in the 7-AA semifinals and a state playoff berth.

Kylie Boswell came off the bench and scored seven points to lead the Lady Indians. Julia Williams and Olivia Moses both finished with six points. Armuchee’s Arionna Dozier was injured in Monday’s game and did not play.

Tori Williams paced Dade County with 12 points, while her teammate, Ali Thompson, had 10. The Lady Wolverines with play No. 2 seed Rockmart on Thursday.