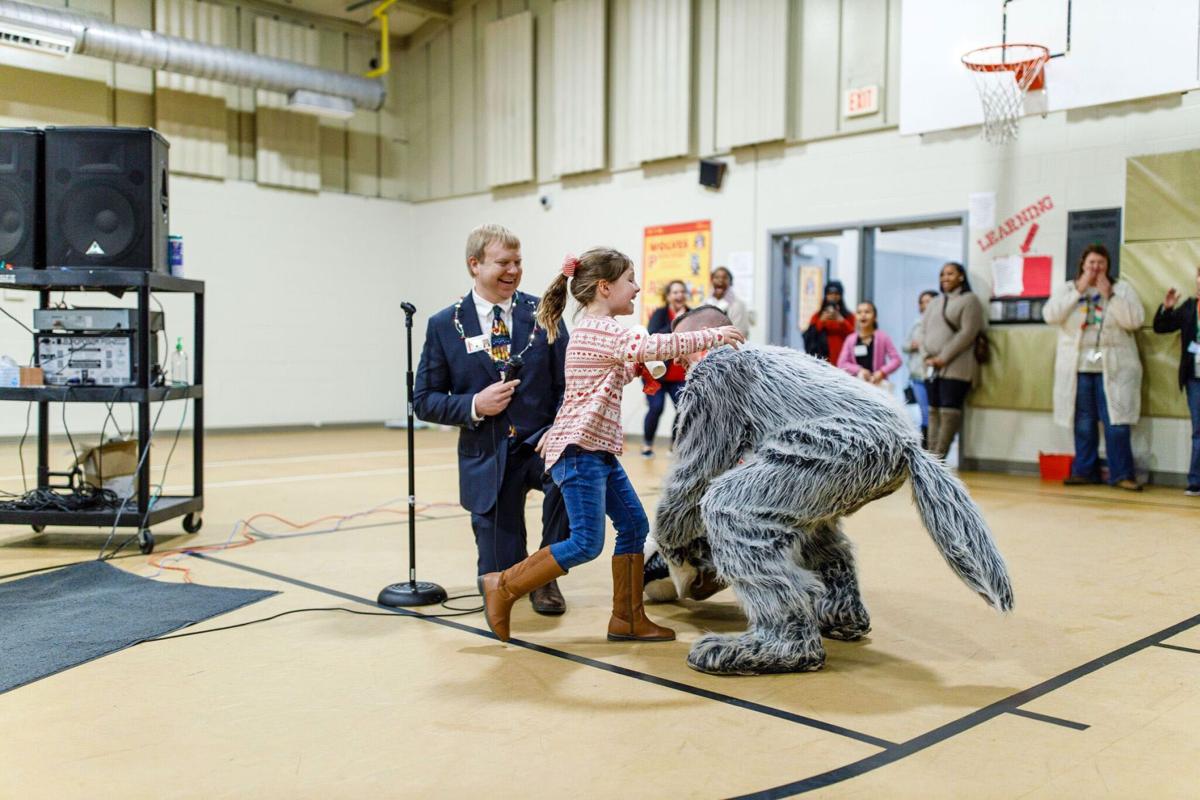 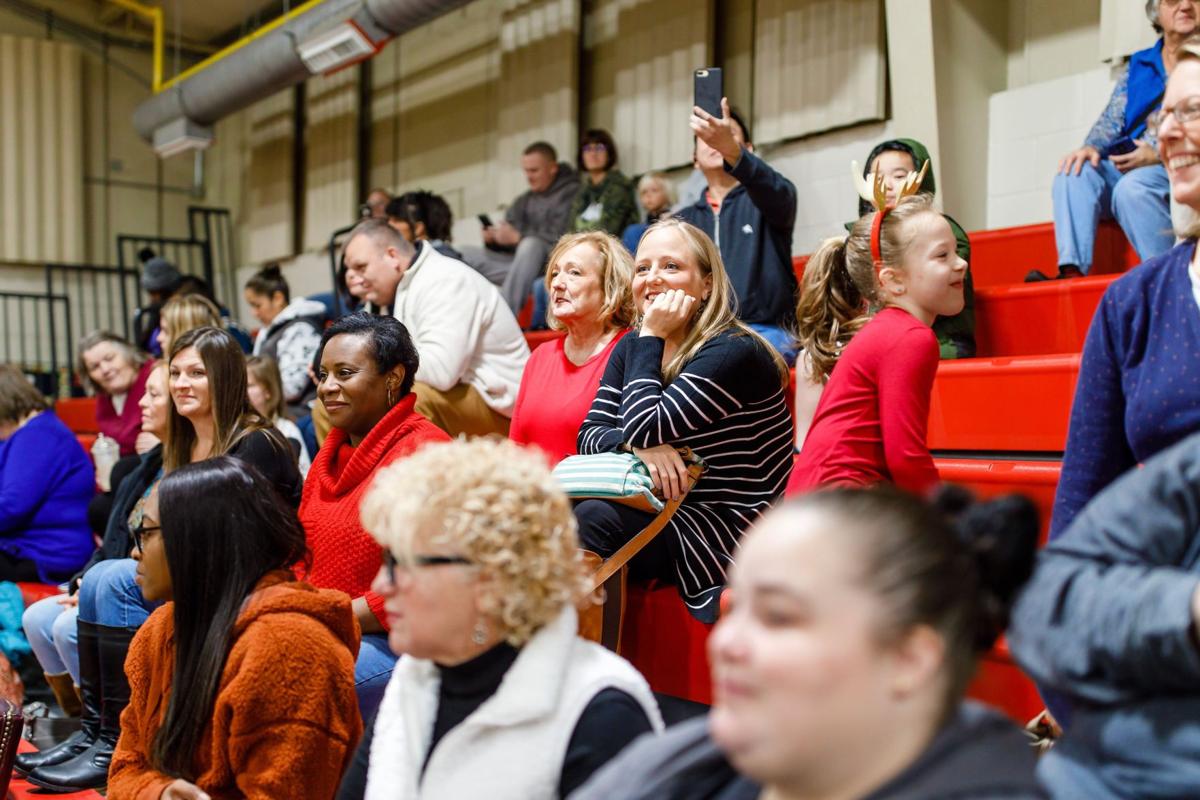 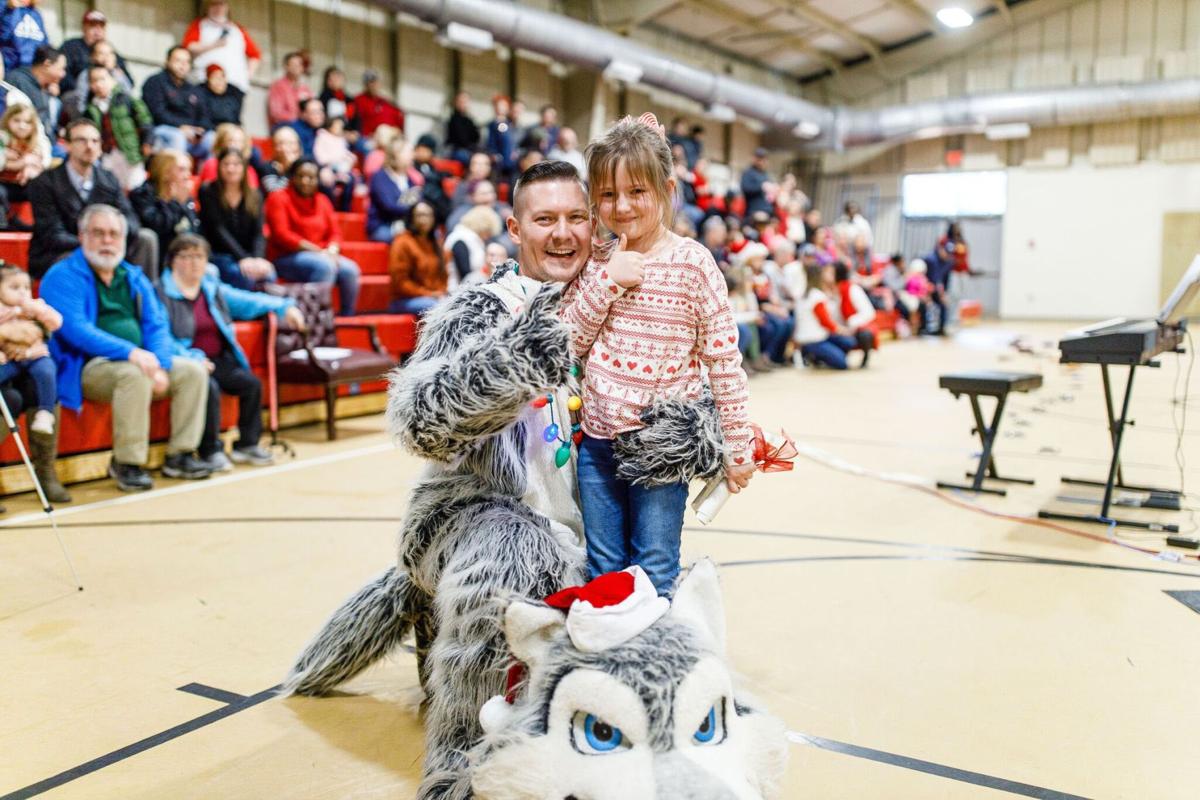 West End Elementary student Cora Harris gives a thumbs up while clutching her father, Navy Hospital Corpsman 1st Class Jonathan Harris, who surprised her in the guise of Willie the Wolf during the school’s Christmas concert.

West End Elementary student Cora Harris gives a thumbs up while clutching her father, Navy Hospital Corpsman 1st Class Jonathan Harris, who surprised her in the guise of Willie the Wolf during the school’s Christmas concert.

It all started with a Christmas wish from a little girl and a grandmother with a little inside information.

Teresa Price, an administrative assistant for the Rome City Schools superintendent’s office, wanted to surprise her granddaughter, Cora Harris, with something that has been at the top of her holiday wish list since her father was deployed to the Middle East more than seven months ago.

When Price got wind that her son-in-law, Hospital Corpsman First Class Jonathan Harris with the United States Navy, was able to make it home just in time for Christmas, she knew her granddaughter would remember his homecoming more than a Barbie house or a new bike with all of the bells and whistles.

So, she decided to reach out to her school family and make the day one Cora would cherish for a lifetime.

Cora is a student at West End Elementary School and the educators there had already scheduled a holiday music concert, performed by the second grader and the children in her class on the day of his arrival. Price connected with them and they decided to loan Jonathan Harris their Willie the Wolf mascot costume, to give Cora the surprise gift of her father coming home.

Just like any school function, the children filed into the risers and presented the crowd with songs, all with a holiday theme.

When Principal Dennis Drummond announced that Willie the Wolf was in the building the children clapped and cheered, not knowing that Cora’s father was underneath the fur and pointy ears. Willie even had a seat reserved for him, right down front, for the show.

After the last set, “Willie” interrupted Drummond with a special note from Santa he had been clutching in his hairy fist. The letter addressed to Cora said Santa had received her Christmas list.

Then Jonathan Harris removed the mascot head and made young Cora one of the happiest little girls to ever hug a sailor.

“At West End, we celebrate our veterans; we are so proud of Mr. Harris’ service to our country and the sacrifices that he is making,” Drummond said. “We are just so happy just to be a part of the homecoming, and we are also excited for Cora. I know she will have a wonderful Christmas, and I couldn’t think of a better present for her than having her entire family under one roof.”

Harris called the opportunity to surprise his daughter “incredible.”

“I am so thankful for all of the respect from the community, and for Rome City Schools for allowing me to do something like this. I could never ask for more,” he said.

He said he and Cora have always loved watching videos of other dads, mothers, sisters and brothers coming home to surprise their loved ones, and this was a special way to surprise he.

“In fact, during the Thanksgiving holiday, Cora even mentioned to my wife, Kortney, that she would love it if her dad could come home and surprise her like that one day,” Harris added. “Seeing how much dedication Cora has to me being in the Navy is incredible. It truly is an honor that I could do this for her and support her like she supports me.”

Price said she was thrilled to be there, to see her granddaughter at one of the happiest times in her life.

“We have seen things like this happen on television and online, but to actually be here and be a part of it was awesome,” she said. “I know that Cora got exactly what she wanted for Christmas this year, and we are so excited to spend this holiday together as a family.”

Dawn Williams, assistant superintendent of Rome City Schools, was present to witness the homecoming — one she had been keeping under wraps for a little over a month.

Wiping tears from her eyes, Williams said one of the school system’s goals is to create a family environment.

“It is so important for us to provide opportunities like this because children flourish that way. It is not about just achieving high test scores, it is about achieving greatness as parents, people and community members. And family comes first, always,” Williams said.