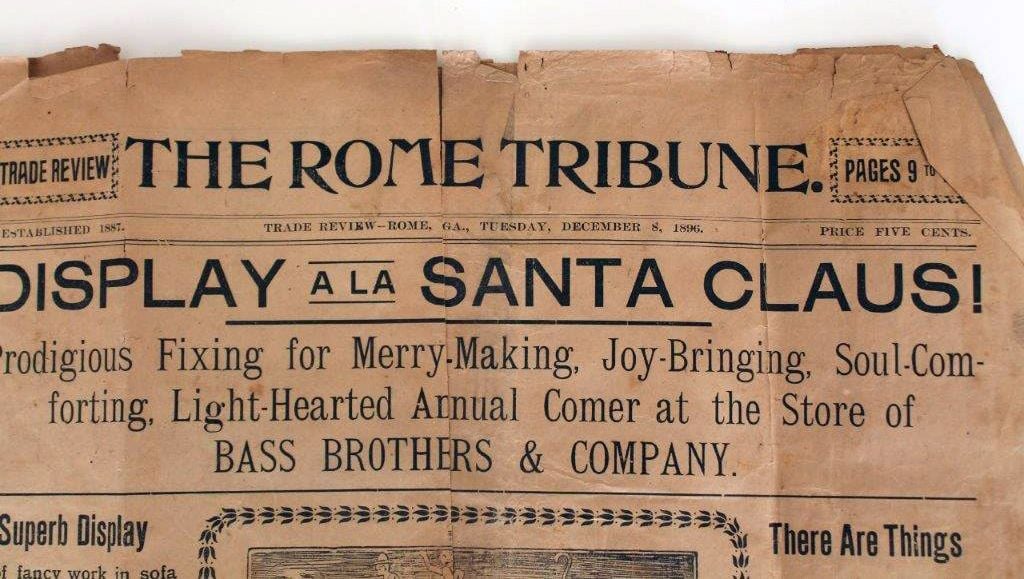 John Ingram found the 124-year-old newspaper while going through boxes of items after clearing out his parents’ house. His great grandparents were the ones who kept the paper which is in remarkable condition considering its age. 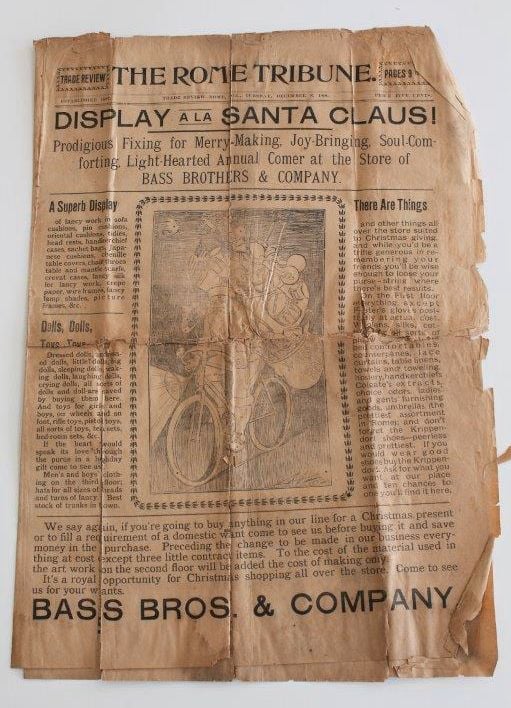 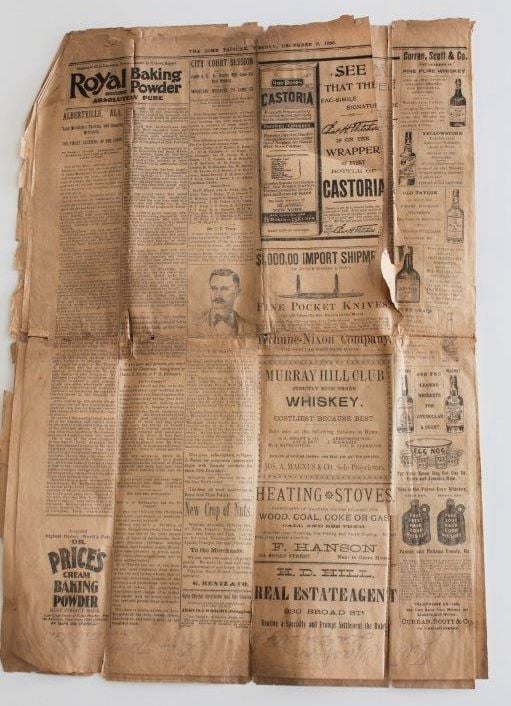 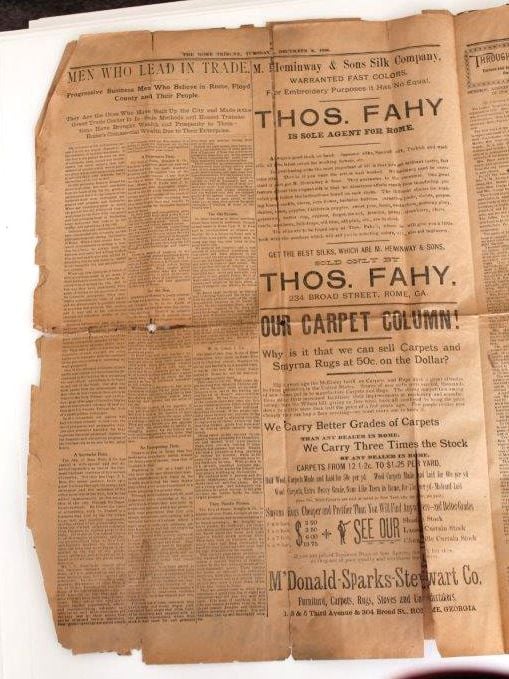 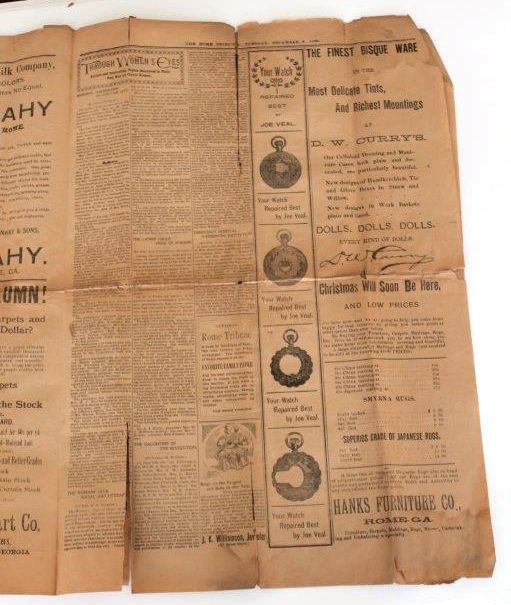 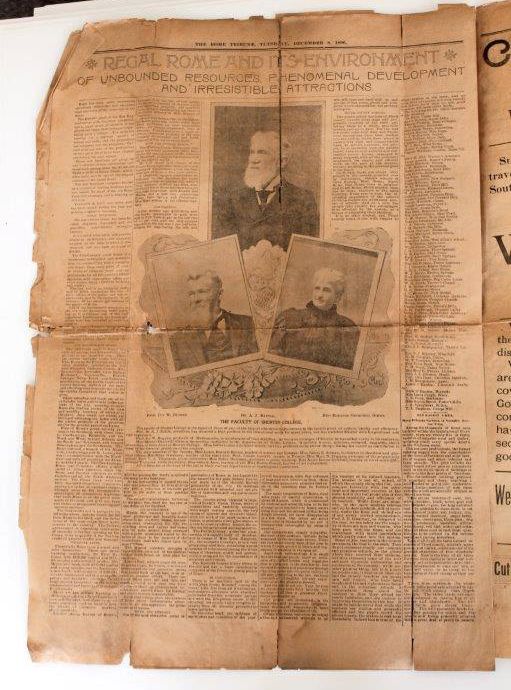 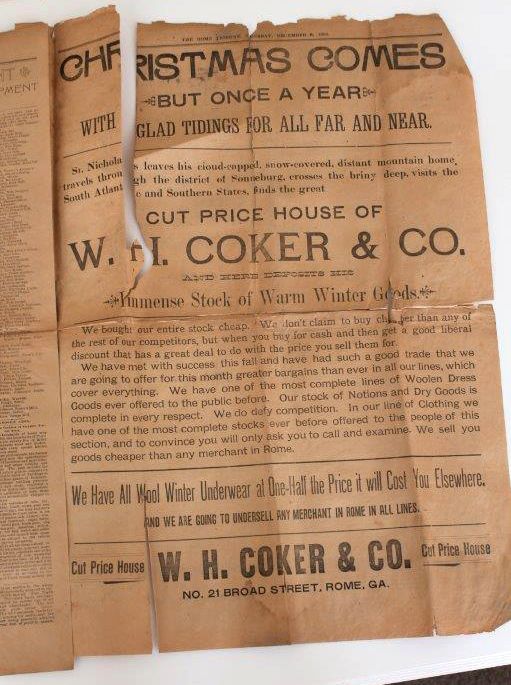 John Ingram found the 124-year-old newspaper while going through boxes of items after clearing out his parents’ house. His great grandparents were the ones who kept the paper which is in remarkable condition considering its age.

When John Ingram was going through boxes of items after his mom passed away, he came across a very cool find.

Tucked away with a variety of other antiques and items was an old newspaper — frayed around the edges, discolored over time, but otherwise in good condition. As he examined the paper he realized how special it was.

The paper is a Dec. 8 issue of the Rome Tribune (which was what the Rome News-Tribune was called a very long time ago). But it’s not the name that surprised Ingram, it’s the age.

The frayed but very legible and well-preserved paper in his hands was printed 124 years ago.

“The paper actually belonged to his great grandparents,” said Ginger Ingram, John’s wife. “They were the ones who saved it. Then somehow it passed to John’s mom and dad who saved everything. When his mom passed away, many of their belongings came to our house and John started sorting through everything and that’s when he found it.”

Ginger said she’s unsure of why John’s great grandparents had saved that particular paper in the first place. She doesn’t know if perhaps there was a particular story that mentioned someone they knew. Or perhaps the date was of some significance.

Whatever the reason, it is lost to history now. But the Ingrams hope the paper will have value to someone in the community or someone who’s interested in collection vintage newspapers and other documents.

The front page show’s the date: Tuesday, Dec. 8, 1896, as well as its price of five cents. The top headline (which is what drew John’s attention the moment he found it) is DISPLAY a la SANTA CLAUS: Prodigious Fixing for Merry Making, Joy Bringing, Soul Comforting, Light Hearted Annual Comer at the Store of Bass Brothers and Company.

The inside pages are filled with stories and advertisements — many of which would be puzzling for people to see in a newspaper today — particularly the ads. Items like baking soda, stoves, dolls and even pocket watches are being advertised.

The headlines read “Men Who Lead in Trade,” “City Court Session,” “Through Women’s Eyes” and a full page feature titled “Regal Rome and its Environment: Of Unbounded Resources, Phenomenal Development and Irresistible Attractions.”

Incidentally, to put the paper into historical perspective, here are a few noteworthy events that happened in 1896: Charles King drives the first automobile on the streets of Detroit, The first modern Olympic Games are held in Athens, Greece, William “Buffalo Bill” Cody founds the city of Cody, Wyoming, Utah is the 48th state admitted to the union and F. Scott Fitzgerald is born.

Ginger said the paper is in tact (6-8 pages) and believes it provides a tangible link to Rome’s past. Not only is it a copy of the community’s newspaper, but it also captures a specific day in time, offering readers a glimpse into what locals would have been talking about on a daily basis at a time when the newspaper was the only way in which the public could get the news on a regular and reliable basis.

The Ingrams have posted to newspaper to Facebook Marketplace to see if there is any local interest in buying what is essentially a window into Rome’s past.

“John would love to see it go to someone who was interested in either the local history behind it or the fact that it’s just a very old document,” Ginger said. “

Until then, the very special newspaper is being kept in a safe place where it awaits a new owner. Perhaps it will be a time-capsule of sorts, preserved for another 124 years.

For more information about the paper, email jingram54@gmail.com.