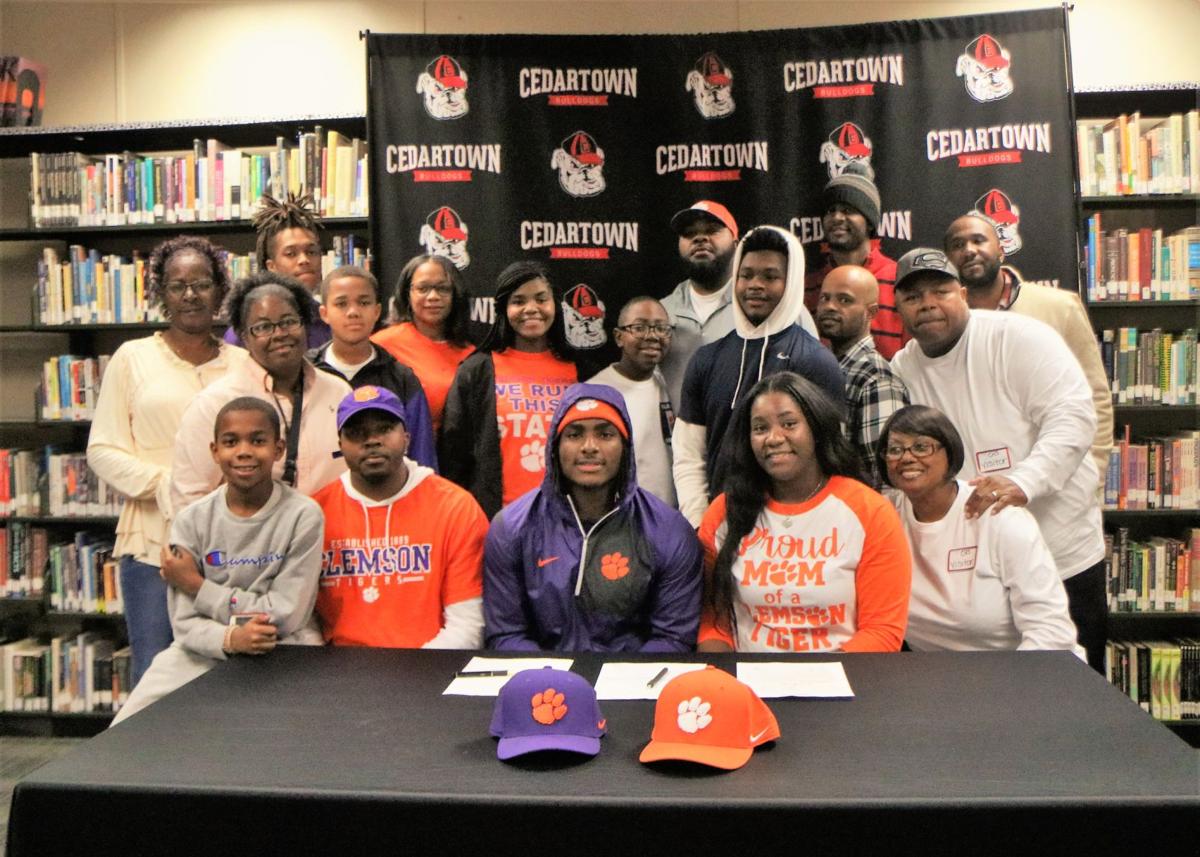 Family gathered around Kobe Pryor during his signing day ceremony with Clemson on Dec. 18. 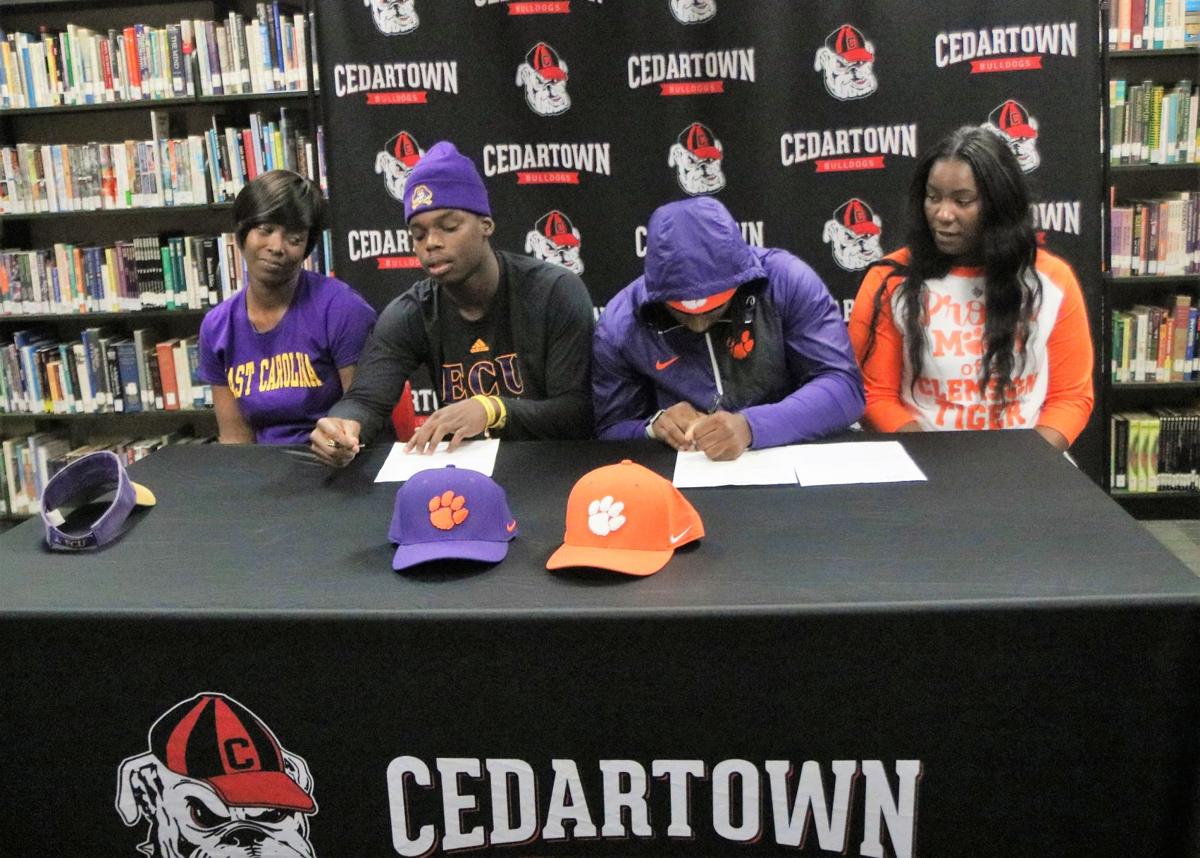 Taji Hudson and Kobe Pryor were flanked by their mothers as they signed the paperwork to head off to East Carolina and Clemson during a signing day celebration at Cedartown High School on Dec. 18. 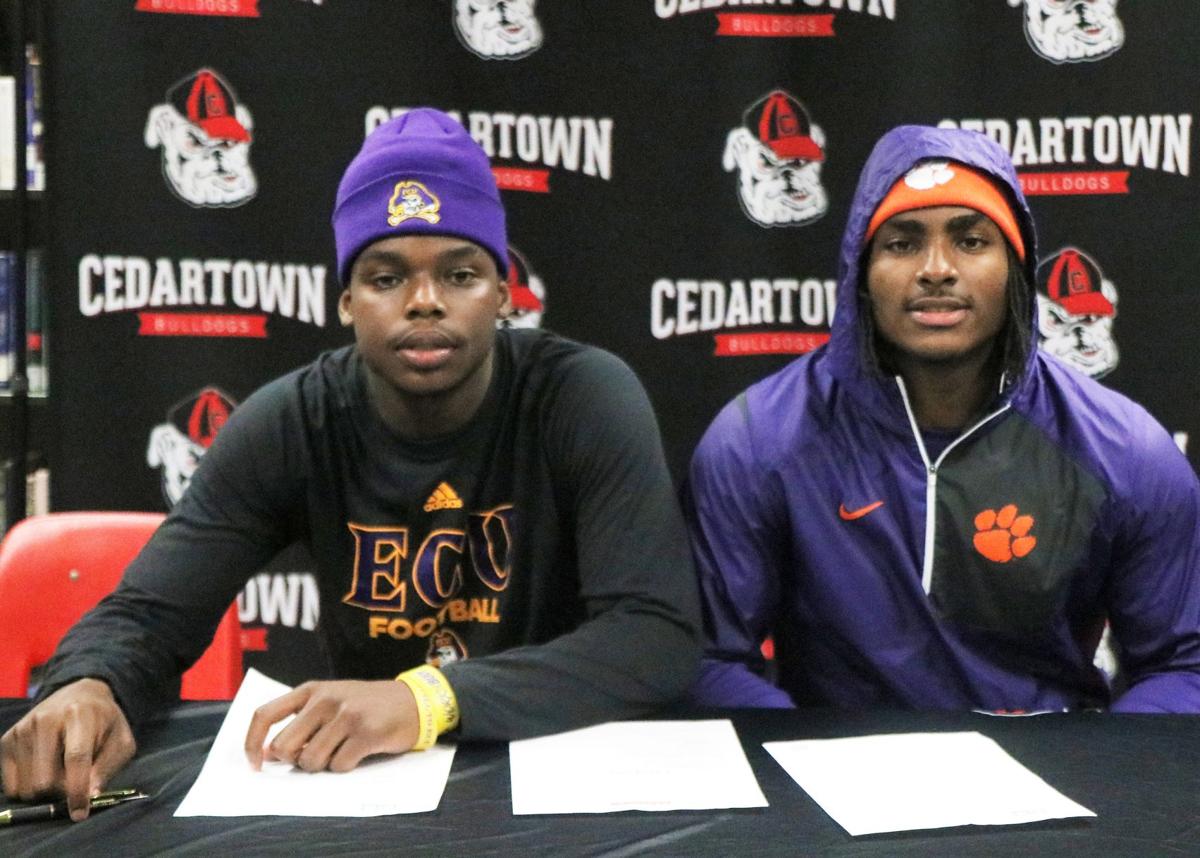 Taji Hudson and Kobe Pryor celebrated together their official signings with East Carolina and Clemson on Dec. 18.

Family gathered around Kobe Pryor during his signing day ceremony with Clemson on Dec. 18.

Taji Hudson and Kobe Pryor were flanked by their mothers as they signed the paperwork to head off to East Carolina and Clemson during a signing day celebration at Cedartown High School on Dec. 18.

Taji Hudson and Kobe Pryor celebrated together their official signings with East Carolina and Clemson on Dec. 18.

It all became official Wednesday afternoon for Kobe Pryor.

“I feel good, I feel real excited. It’s great, because I finally have my home,” Pryor said.

The Cedartown running back is officially a Clemson Tiger. After months of being a loyal commit, he finally signed his name on the dotted line.

For many big-name prospects, recruiting can be very overwhelming. However, for the three-star back, this was an extremely easy decision.

“Even before I committed, I knew all along I was going to Clemson. I visited and fell in love there. I love it, it just feels like home,” said Pryor. “All the coaches and people there made me feel wanted and all the supporters of the program just helped make me realize that it was home and that I was making the right choice.”

Pryor committed to Clemson on May 18. His pledge never wavered. Though some prospects choose to make a big Signing Day spectacle filled with anticipation and uncertainty over the decision, Kobe instead chose to have his signing be a celebration of him ending up at his dream school.

“I mean, I knew I was going to Clemson, so I wanted today to be a celebration with friends and family,” said Pryor. “It means a lot to have all my friends, family, and coaches here. They’re all people who have supported me, motivated me, and believed in me, and I’m thankful to share today with them.”

Nobody in the Cedartown High School library- family or not- was as proud of Kobe as former CHS Head Football Coach Doyle Kelley.

“I knew from the beginning that Kobe was going to be a great football player for us and a guy that would end up playing on Saturdays,” said Kelley. “He grew so much as a player, but what I loved seeing was him grow as a man. He and Taji are men of integrity: both are ‘first in the weight room, last one out’ type guys. They’ve grown so much and they’ve earned all the great things that came their way today.”

“Kobe’s record speaks for itself. He is an incredible talent. He was the Region’s Player of the Year, played at a high level for us for four seasons, and it was an absolute honor for me to coach guys like him and Taji,” said Kelley.

Kelley said that Clemson’s belief in Kobe Pryor stood out among all their competitors in his recruitment.

“Clemson’s Co-Offensive Coordinator, Tony Elliot, came down here in January just to see Kobe work out. He was impressed with him on tape and in-person, so we talked a few times about how Kobe is in the classroom and he was impressed there too,” said Kelley. “Elliot only gave out two scholarships all year- one to Demarckus Bowman, a five-star running back from Florida, and one to Kobe. He assured us that Kobe would have every opportunity to play early at Clemson.”

Pryor finishes his career as one of the most decorated offensive players in Cedartown history. He earned numerous accolades at CHS, including invites to statewide all-star games and multiple All-Region honors. Kobe wound up as the 2019 Region 5-4A Most Valuable Player as a Senior.

Pryor was rated as a three-star athlete by 247Sports. He finishes as the no. 443 player in the nation for the Class of 2020, ranked as the no. 32 running back nationally and the no. 45 prospect in the state of Georgia.

One person who takes exception to those rankings is Kelley.

“I don’t know where they get these rankings from. I think Clemson is getting a five-star caliber player. You watch what he can do, he has the size, the speed, the power, the vision; I don’t think there’s many players better than him out there,” he said.

Now that he is officially a member of the Clemson Tigers, Pryor said that his next steps are to “obtain a degree, hopefully earn some playing time, and just have a wonderful time at Clemson.”

Pryor said he plans to either major in Business or Coaching/Athletic Leadership at Clemson University.